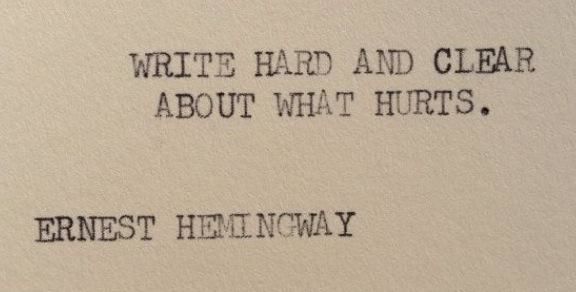 “Write hard and clear about what hurts”
Ernest Hemmingway.

I love that quote. It is a quote that has served me well during the trauma of my divorce. I still write about what hurts, but not always on my blog now because it caused a few problems (to say the least).

But interestingly, at the moment what hurts most is the thought of moving closer to 50 and in particular, the physical decline of old age. It is time to confess to the fact that I know a lot of people who are getting very close to the half century mark. I myself have a big birthday coming up quite soon, but it is not this one. It is another one. A different one. A very much smaller one. You understand, I’m sure.

I mean, I’ve had a cold that has lasted about two weeks and caused my whole nose to look as if I’m a massive cocaine addict – a scab that’s taken AGES to go away and frankly my 21 year old son’s ankle injury is going to heal before my nose injury is. Look at his foot – this picture was taken just over a week ago and he’s already hoping to be playing football again soon – IT’S NOT FAIR. Why do our cells stop performing properly as we get older?:- So, in preparation, I’ve been doing some research amongst my fellow nearly-fiftysomethings and post fiftysomethings to try and gauge how I might feel five years down the line when I’ve caught up with them and I’m just not sure I’m really ready to take the leap. It seems to me that things start falling apart at the seams. Mainly the body. Knees, hips, spines – most of the bones in general. Sometimes cartilage and tendons. Memory seems to be a little bit unreliable as does eyesight and hearing.

“Bits of me are falling apart” seems to be the complaint of the day and it is all a little depressing. How to turn back time? Keep everything in tact? My mother spends her whole time merely accepting the inevitable by constantly saying “well, what’s the alternative?” which I suppose is reasonable.

But it is making me step back and take a look at my space. What I’ve got. What I could still have. What has got away. Tracey Emin has been a hot topic of late by announcing that “I’m going to spend the rest of my life alone and I want to celebrate that.” Speaking as she unveiled a new exhibition of her work in London yesterday, the 51-year-old said: “I’m very much alone and wanting to celebrate that. It doesn’t mean I’m maudlin. I’ve got to make plans for the future alone.

She says; “I’m really enthusiastic about my work, more ambitious and enthusiastic about it than I have been since I don’t know when — since I was at art school, maybe. I’ve got something to look forward to and it’s about me. I’m cosy with what I’m doing. I’m really content.” She says that after years of bemoaning her own singledom, she is no longer looking for love and happy not to make the sort of plans you make if you’re a couple. She prefers investing her time and energy in her close friendships, which are very important to her. She has no regrets about not having children. She doesn’t think she is ageing gracefully, but after 20 years of hell-raising with the Young British Artists that’s to be expected. “At a certain point, your skin goes baggy and your muscles collapse.” Well, she’s right about that – I was trying to do some Pilates the other day and as I did a roll down I barely recognised my knees which were a crinkled mass of skin. It is not good.

I’m with Tracey in many ways – she has come to terms with herself and her body and is happy in the place she finds herself and excited about her future as an artist. The difference is that I have children, so will never feel that “aloneness” that she has to deal with and I’m very happy about that. They are leaving home in droves and I’m hanging on to my youngest one for dear life, but time is moving far too fast these days and it won’t be long before I am sitting at home with my cats. Which is not what I want. I still want to travel, to live abroad, to experience the world in all it’s glory and I will not be making plans for my retirement any time soon. Retirement from what exactly? Is the question I am asking myself of late.

I can’t retire from singing, because sadly I have never been able to sing and even the best teacher on the planet isn’t going to find a voice in there worth sharing. It’s a shame though, I’d love to have been a singer – Eartha Kitt maybe or Nina Simone. I can’t retire from ballet dancing either sadly – although I gather Darcy Bussell hobbles when she walks now, so perhaps that’s no bad thing – there is a very big price to pay to be that amazing as a dancer and your body suffers hugely. I haven’t learnt an instrument either and can’t speak any other languages. I could try and learn an instrument still, but what would be the point? It’s too late to look cool with a guitar and I’d probably have a heart attack or my head would blow up if I tried to breath into a recorder these days, let alone a saxophone or trumpet. A language is another matter, but I’d have to go there and immerse myself in the culture in order to do it or it doesn’t make any sense and I haven’t yet decided where I want to live – and if it’s Africa then I suspect swahili is just going to be too hard for me. Russian? Mandarin? Sanskrit?

Running a marathon is still an option if I want to come last or bring on the above mentioned heart attack or at best, never be able to walk again. The same applies to sky diving, skateboarding, swimming the channel, flying a plane, being a stand up comic or a super-model or an actor. “It’s never too late” I here them say (who are they?), but it is. I look at my children and envy them the wealth of time they have to do and try everything (not that they will because as Robbie Williams quite rightly points out, “youth is wasted on the young.”) It’s not so easy to bugger off either to fulfil your unfilled dreams – “bye kids, I’m just going on a gap year” is extremely tempting but a little unrealistic to say the least, as is starting my own business.

To be honest, I’m just happy to “be”. In a place where I am thankful for all that I’ve got and so for now, I’ll just watch this space for a little longer until I decide that it’s the right time to make something happen. By which time, whatever might have happened will probably be long gone, but never mind. I’m happy to put all my energy into my children and my work and my friends and my interests and fill up my time with people that make me happy and people that I want to make happy and that, for now is enough. More than enough actually. Does that mean that I am reaching a place where contentment takes over from happiness because at the age we are, if we are lucky enough we start feeling comfortable in our wrinkly old skin? Is it a worry that I’ve started enjoying the smaller things in life, nature and words and merely just being? Instead of rushing through life at the rate of knots? I know too many people who are dealing with tragedy at the moment to not be very, very grateful for simply every day that we are all alive and still kicking and who knows if we all live to be one hundred these days then we are still only mere spring chickens at 50 (or 45 in my case).

*Although stopping now to google face and knee lifts before it’s too late….

I turned 50 this year and was very unsettled by it, so different from turning 40 which seemed so exciting. I remarked that birthday cards have ‘flirty at thirty’, ‘naughty at forty’ but the best they can come up with for 50 is ‘nifty’!
The main advice I can give is make sure cameras are positioned above your head. I got quite a shock doing a Skype call with my son, wondering who the woman with the saggy chin was in the corner.

Agree. Fifty was meh! I pretty much ignored it but was not happy.

Are you fully recovered now? Lx

Well, if you decide to learn a language I suggest you don’t try Russian. I’ve lived here 5 years and still can’t have a conversation with a taxi driver other than ‘left here, please’ ‘straight ahead’ and ‘isn’t the traffic terrible today’. Of course, that might just be me, being dim, but I was never any good with all those cases…

I find things hurt more than they used to. If I’m sitting in an awkward position – on the floor or angled wrongly while watching TV – it starts being painful after not too long. I’m pretty active too so I can’t even blame it on not being fit.

Yup, that is definitely happening Lx

I had a mammogram this week as they screen from age 47 in my area. I felt properly middle aged at that, I can tell you

They haven’t offered me one yet!! Lx

OMG you had me worried for a second there with that picture of the foot! I actually thought it was yours! Maybe that’s a 50 thing (although obvs I am only 45 like you) – not reading stuff properly any more. Yikes! x

Luckily not mine x

The foot is ugh. You look amazing though – and, definitely as importantly, always seem so together, friendly, charming and all those things grown-ups are supposed to be, without seeing at all (sssh) old. I, on the other hand, am properly falling apart, and have been for years……

THANK YOU lovely you – and you are SO not falling apart….(well not the bits I can see anyway) Lx