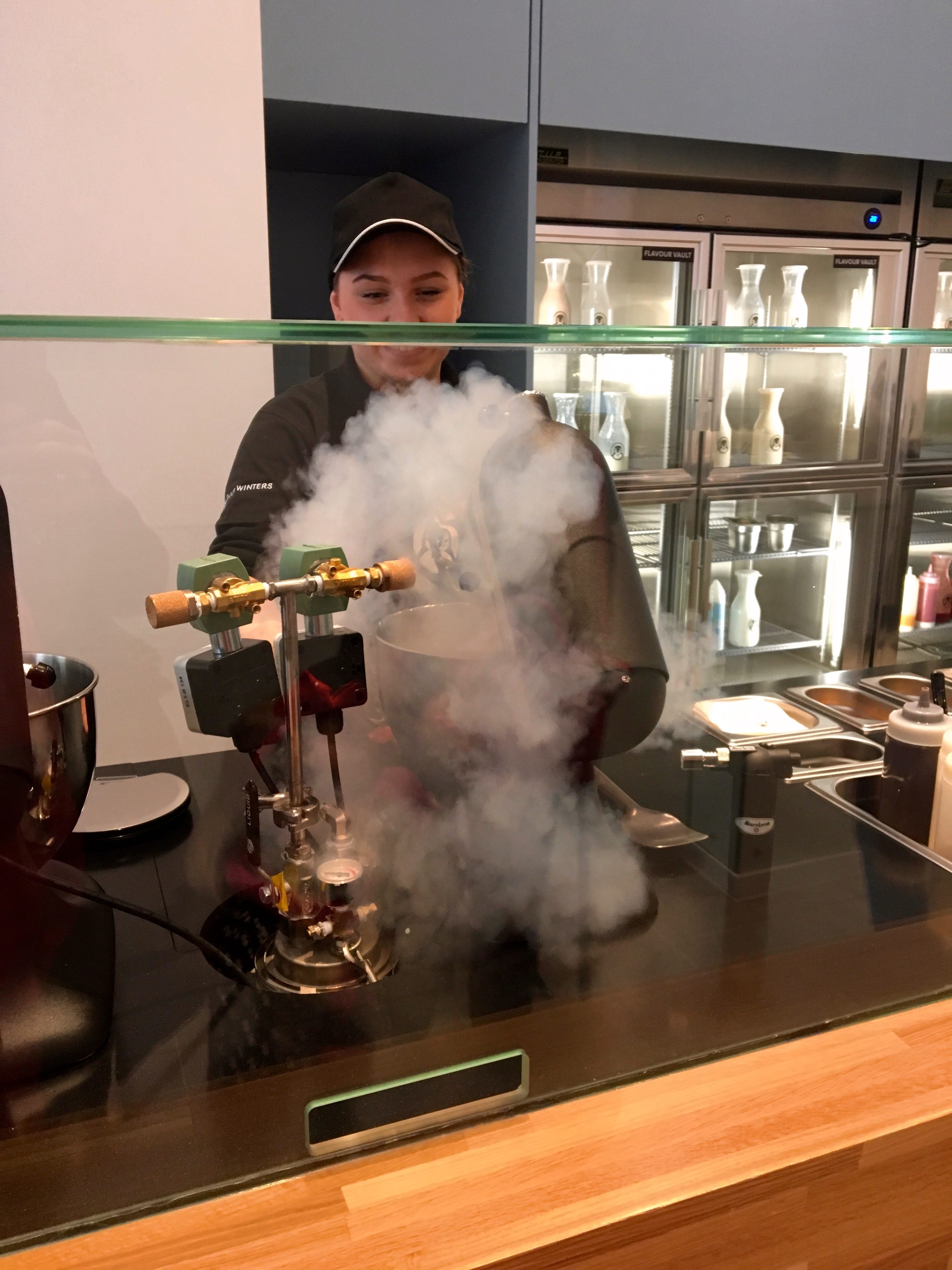 “Four Winters“, a new concept in ice cream, where they freeze the seasons and share them with the world has hit London town. The newly opened parlour is to be found at 103 Gloucester Road and we were there to welcome them to London and to (of course) do a taste test. I thought the best way to give them a fair appraisal was to bring three different age groups along, so my daughter, my niece (outfit put together by herself) and I were chosen for the difficult task ahead. We were lucky enough to be hosted by the founder of the company himself, Mr Zeid Zabian who had come over from his original establishment in Jordon where he runs a successful business as an “ice cream revolutionary”. Their chef is New York based and brilliantly creative with the development of their flavours. The ultimate aim of the enterprise is to bring “surprise and delight” back into the joy of eating ice cream and they certainly manage to do that.

Their mission statement is that “We Take Ice Cream Personally” :- The shop is very cool (no pun intended), with icicle decor and there is not a sprinkle or bright coloured ice cream in sight:- Instead you are confronted with jars of liquid at the back and mixers at the front. You choose your flavour and watch them create it for you using nitrogen which feels a little like being in a science lab. Clouds of dry ice emerge as the mixture is frozen before your eyes and liquids combine to create the finished product. They pride themselves on the quality of the ingredients and the delicate fusion of flavours. The idea is that each season, there is another set of choices, so for winter, spring, summer and autumn they are freezing an entirely different set of flavours.

Here is Zeid explaining how it all works:- In goes the liquid mixture:- Turning it into ice-cream using the nitrogen:- The fusions and the prices:- Waiting for the results:- Zeid telling us all about his background:- Excited girls as we launch the attack!:- The “Afternoon Tea” ice cream was insane. A mixture of homemade jam, clotted cream ice cream, more jam and then little scones on top are exactly like the ultimate jam and cream scone, only colder. Delicious. Here we watched them toast the teeny weeny marshmallow squares:- The Strawberry ice cream was made up of two types of strawberries and wonderfully fresh.

The Peanut Butter ice cream was exactly as you would want it to be and the chocolate the same. My niece’s favourite was the chocolate, as you can see by her little smiley face:- One of my favourites was the rose ice cream – it arrived with little bits of Turkish Delight on the top and was exquisitely subtle. Definitely one for a more mature palette I imagine.

We then tried their “ccc” crazy flavour of the season “The Bees Knees” a crunchy honeycombed combination with a spicy kick – I didn’t manage to take a great photo because we ate most of it before I remembered:- The penguin is their choice of mascot, given they’re considered to be friendly and loveable, come from a cold climate and are gender neutral. My little niece certainly loved the little chap as you can see:- My poor daughter, on crutches…with her cousin:- Zeid’s background is in industrial engineering and economics and he joined his partner and his son three years ago to join the growing business.

They are open from midday to 11pm every day and 1pm to 10pm on Sundays’ – it will certainly become a popular late night choice for the uber trendy crowd, who were already milling in through the doors to sample their flavours.

I would thoroughly recommend that you give it a go. It was a great experience, that we have all been talking about since.