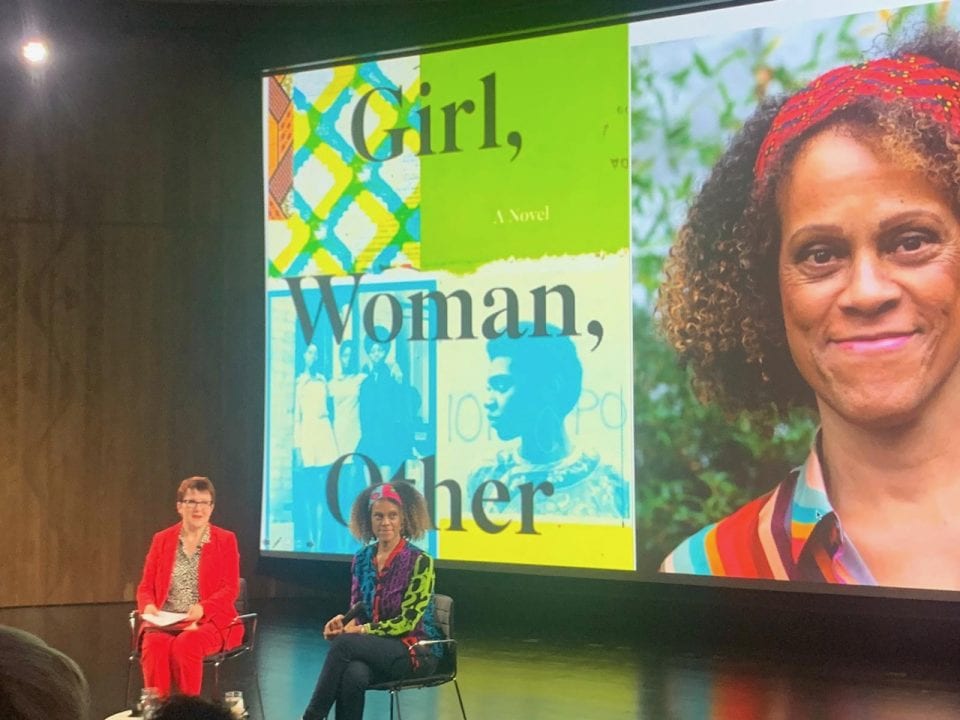 Girl, Woman, Other by Bernardine Evaristo is going to go far and wide. It should be read by everyone..put on every school and university reading list to help understand modern day Britain in all it’s glory and shame. It speaks to us all on so many different levels; class, gender, race, sexuality, politics and by using humour, Bernadine manages to get a lot of her points across in an understated, yet incredibly powerful way.

Bernadine has managed to produce something extraordinary – a book that speaks to everyone, despite their racial background – yes, mainly women, but men are appreciating it too. It took her five years to produce and I’m not surprised. It’s seemingly quite simple in it’s structure, with the minimal use of words, but it’s how she describes the characters, says things in ways that don’t state the obvious that is genius. It’s experimental in form – very limited use of full stops, no quotation marks, unusual paragraph style. This only adds to the joy of reading it in my opinion.

We read the book for our book group and had a feisty conversation about it. Then went to see her talk on Monday evening at the V & A. She is lovely to listen to, funny and humble but yet happy to point out that she can literally describe her life as pre and post Booker prize and is loving every minute of being in the centre of her universe.

Here she is talking at the V&A with the image of her winning the Booker prize with Margaret Atwood this year – the first time it’s been shared and a brilliant decision. She told us that as it was a black tie event, she wore a black tie and a bright pink trouser suit, she never wears skirts:- 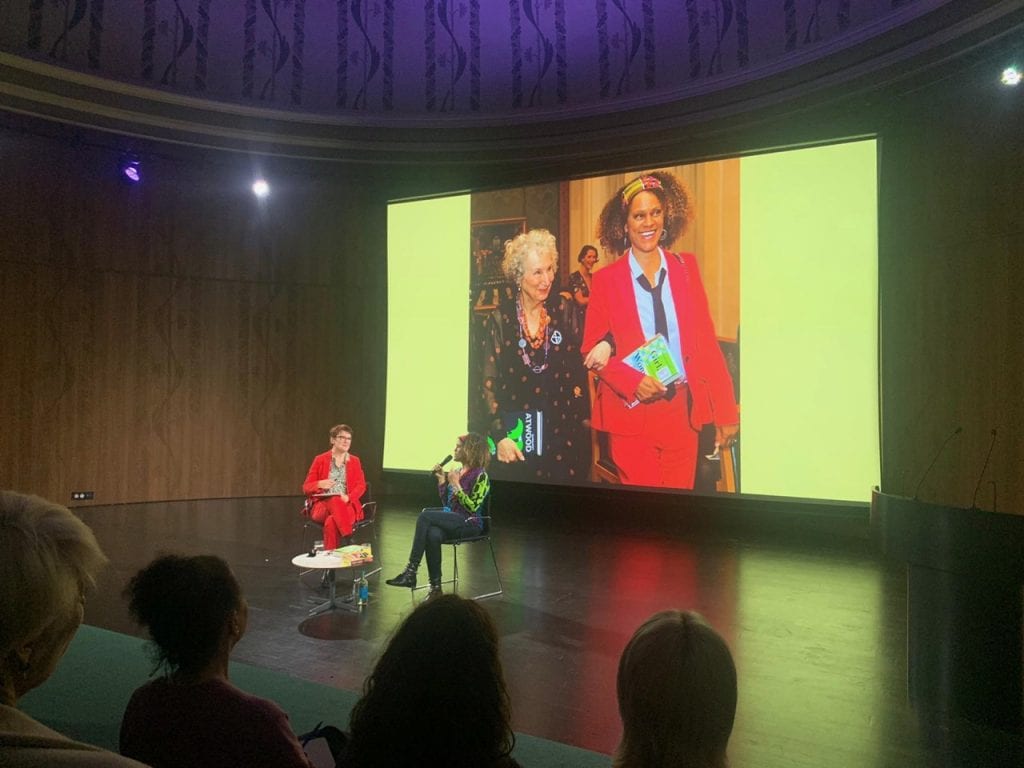 She’s been writing for 40 years and has seven other books out as well as poetry and plays. She is Professor of Creative Writing at Brunel University and Vice Chair of the Royal Society of Literature. She has an MBE. She is an activist and founded Spread the Word amongst other initiatives. AND SHE’S 60 NOW…WTF? She looks half her age.

The fourth of eight children – her mother is English and her father is Nigerian, brought up in Woolwich, she is well placed to write the stories of twelve individual lives, mostly women, mostly black – from Newcastle 1905 to Northumberland 2017, she weaves a fascinating tale, all interlinked in different ways. Describing how she had visual images of them all before fleshing them all out and linking them together organically over time. We follow their journey’s, via their own interior discourse and she successfully manages to bring them all to life in a gloriously colourful way. The interesting thing was that at the talk, many people felt that she had written their own private story, told their own lives…how incredible an achievement is that to speak to so many people so personally? 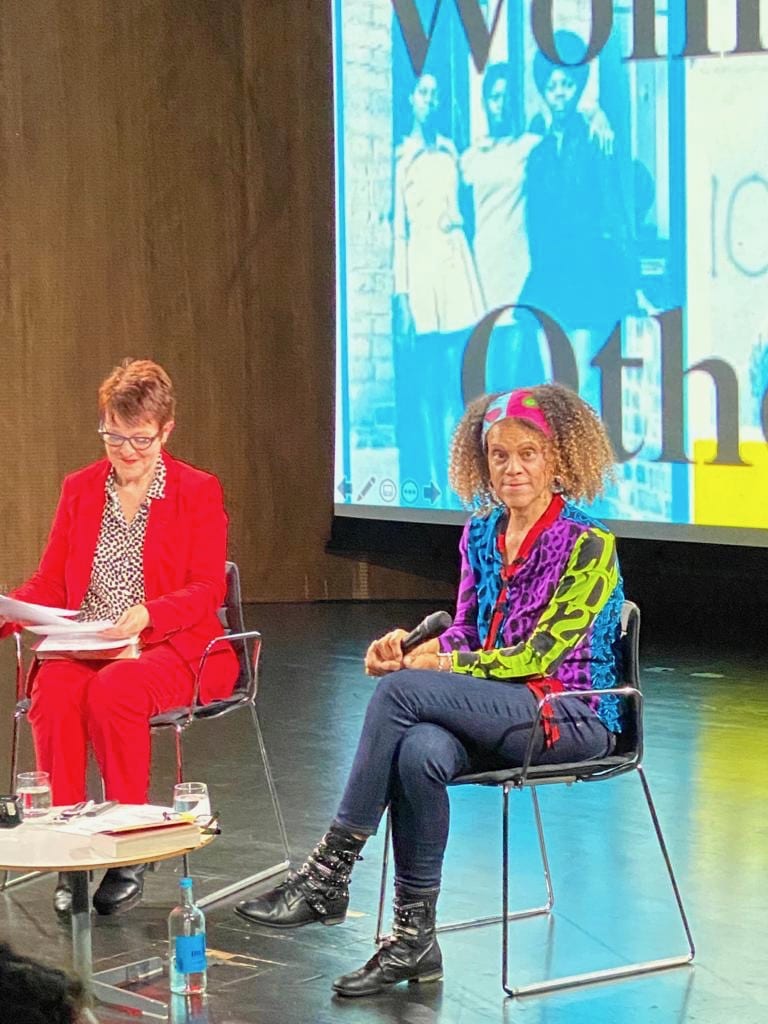 By including four sets of mothers and daughters, she manages to convey the whole gamut of experience, concerns, opinions, relatable to all. Amma, the first character in the book, an ardent lesbian feminist, has a daughter called Jazz (whose father is a gay narcissist according to Jazz) who informs her mother that feminism might become redundant because women’s politics is likely to be taken over by a non-binary future, neither male nor female who wants to stay at home to look after her children when she decides to have them. Amma misses her daughter when she goes to university

she misses the Yazz who stomps about the place
who rushes in as if a hurricane’s just blown her into a room –
where’s my bag/phone/bus pass/books/ticket/head?
the familiar background sounds when she’s around, the click of the bathroom door when she’s in it

the house breathes differently when Yazz isn’t there
waiting for her to return and create some noise and chaos
she hopes she comes home after university
most of them do these days, don’t they?
they can’t afford otherwise
Yazz can stay forever
really.

I can so relate to that.

She also manages to fill Hattie, the 90 year old with a huge amount of common sense and observation, I loved her opinions at her birthday party of her entire family and the fact that she relates most closely to her non-binary granddaughter is a joy – friendship between the young and the old – so special.

There is so much in the book to love, despite there being a lot of difficult issues to confront. The Windrush generation brought to life, the rejection and hatred they experienced, the concept of having to conform to fit in, the managing of “unruly” hair – squashed down to let others see the stage beyond – Bernardine brings that up in her talk – how children are still being sent home from school for having big hair….their natural hair, that she describes endlessly throughout the book in different ways; of being curled, scraped back, covered up…it’s a bigger, wider issue obviously that she is dealing with, but she seems well placed to make people understand the oppression and to do something about it.

This is more than a good read, it’s a life changing experience.

I’m going to read it again. 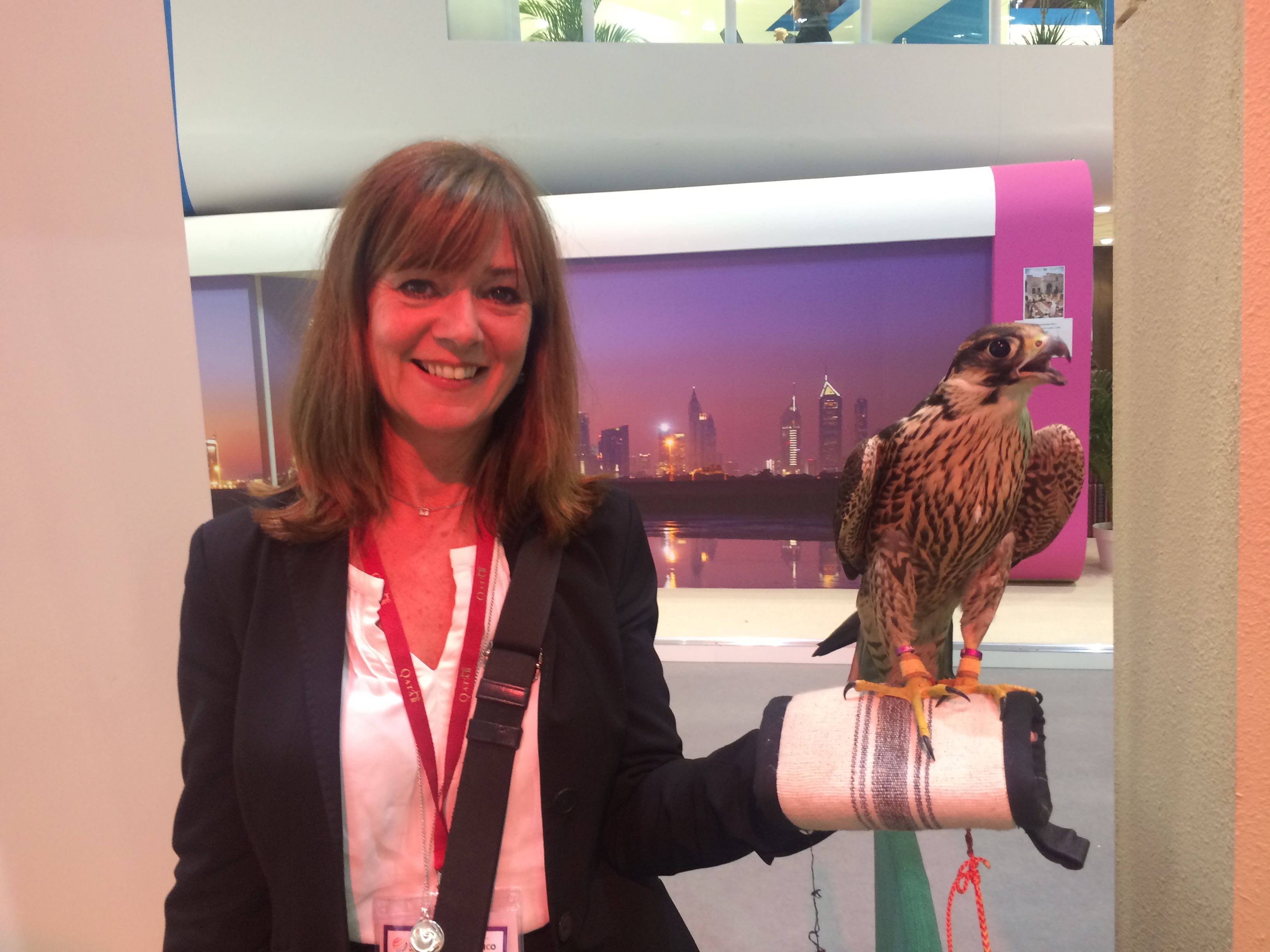