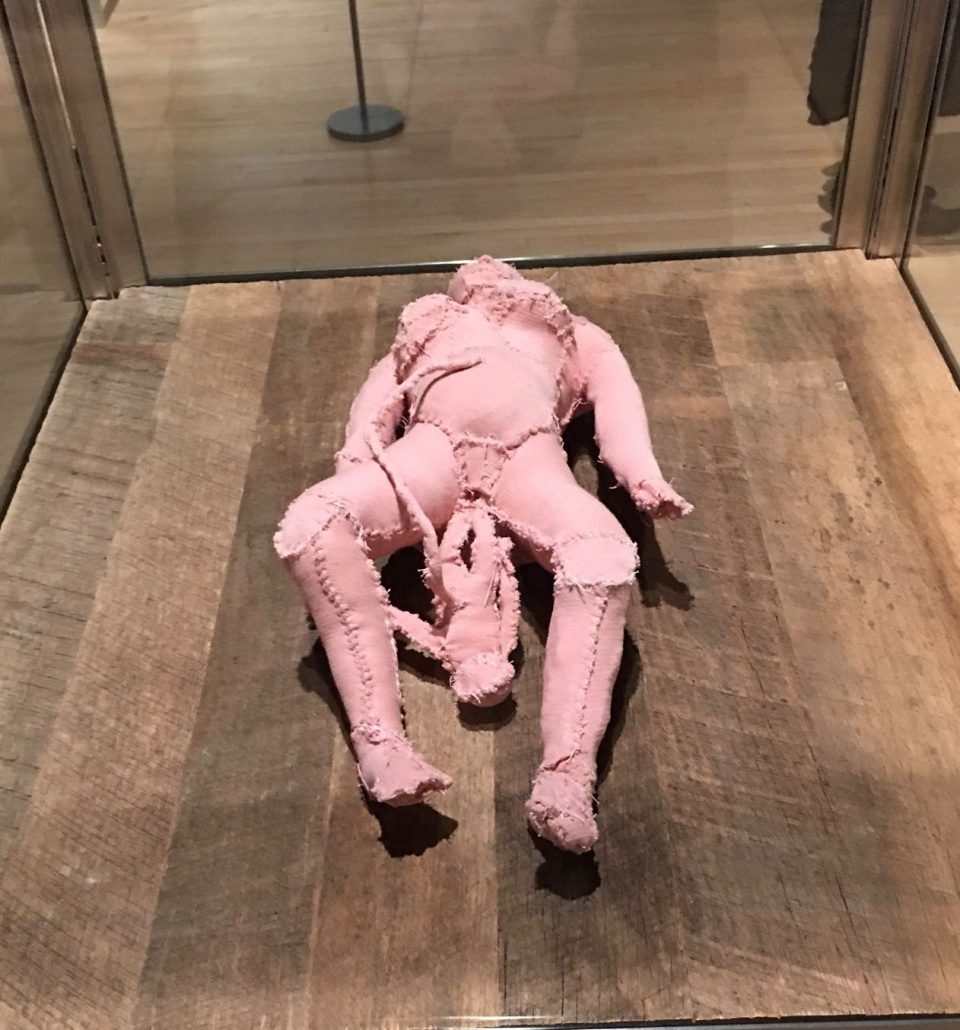 Louise Bourgeois: The Woven Child, at The Hayward Gallery, Southbank Centre. Reviewed by John O’Brien:-
Louise Bourgeois ought to be an inspiration to us all and it’s no wonder that Tracey Emin loves her. She didn’t start making art until her sixties. For the previous thirty years she had been a wife and mother. But from her sixties until here death at the age of 91 (in 2010) she had an astonishingly creative thirty years.

There is then hope for us all.

Best known as “The Spider Woman” (remember those giant spiders outside Tate Modern?) Louise Bourgeois is back in London. Appropriately she has an exhibition at the Hayward Gallery. I say that for two reasons. First because the Hayward is hard on the outside (concrete military Pill Box architecture) but houses beautiful art inside. This double sidedness is mirrored by Louise Bourgeois’s works, which although made from soft fabrics often deal with hard themes. Secondly the Hayward is literally on Waterloo Bridge. The metaphor of the bridge is key to her work as it has been to the expressionist artists from the time of Die Brucke  (the bridge) in 1906. One can only hope that the wonderful advertising poster across the side of the Hayward will entice some of the thousands who pass by, to bridge the physical and cultural distance between the avant garde artist and the ordinary punter. Those who do will be well rewarded because Louise Bourgeois is a profoundly stimulating and thought provoking artist whose work is at once haunting, harrowing and humorous. 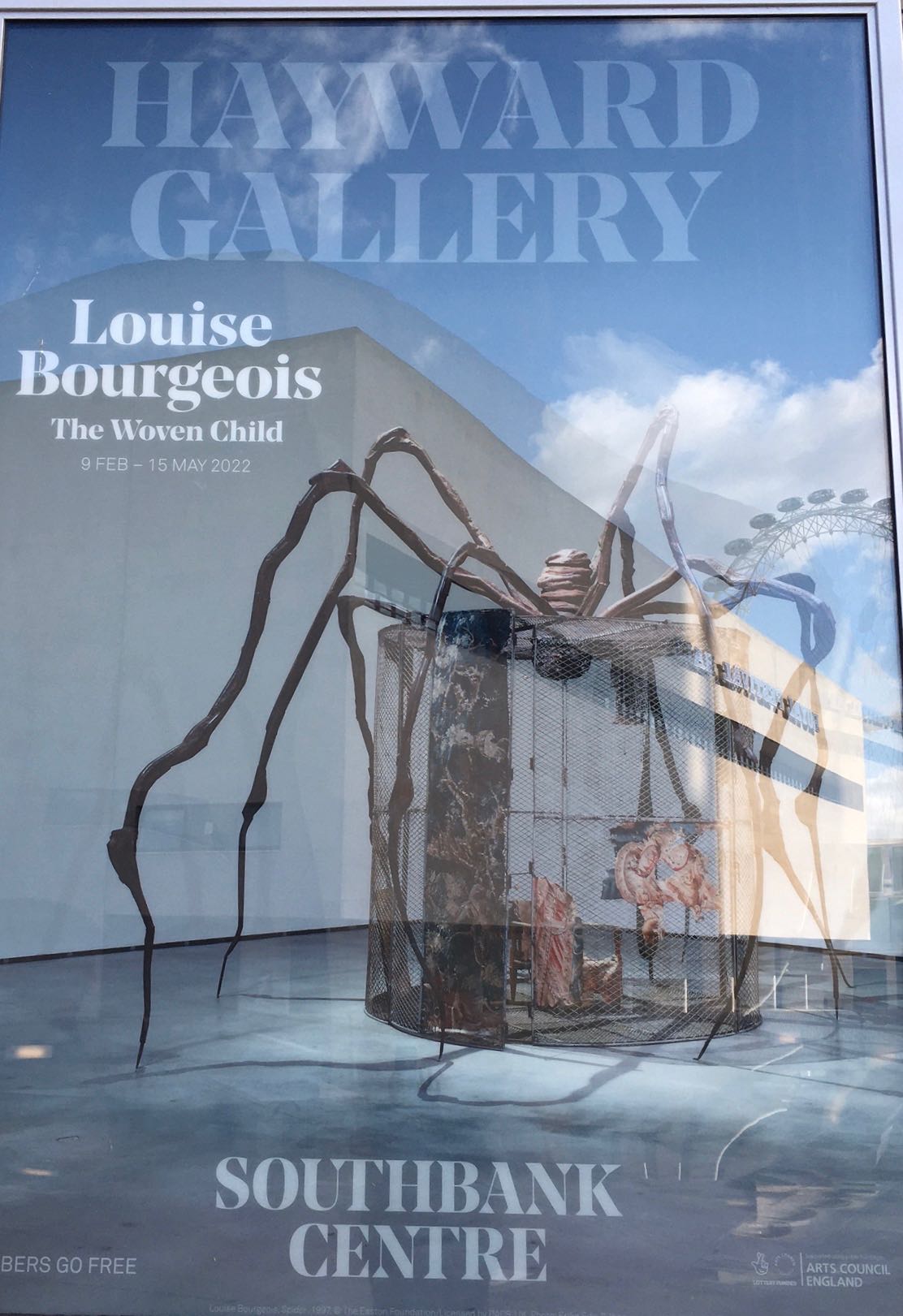 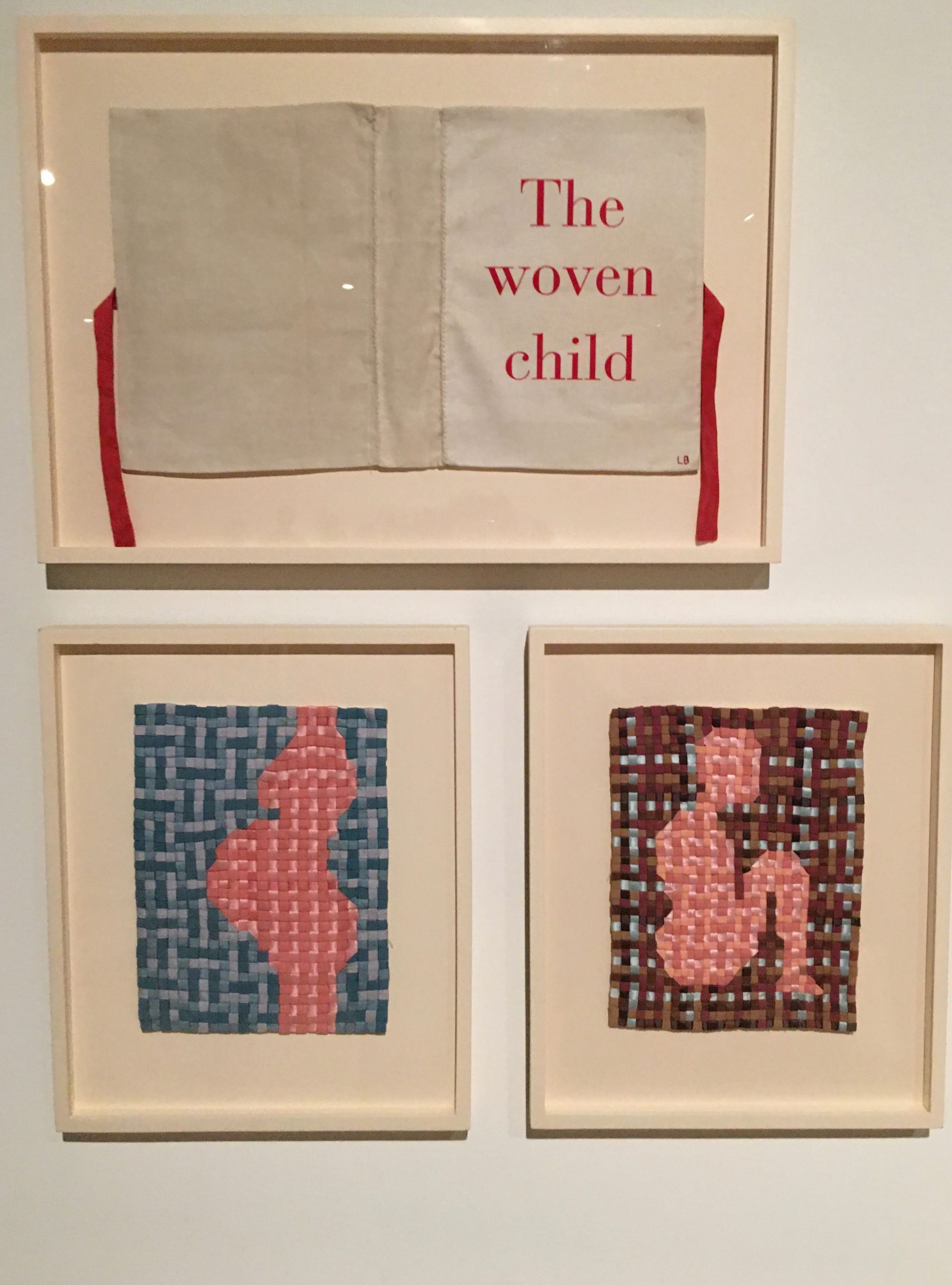 This exhibition is subtitled “The Woven Child”. The title references two of her preoccupations, woven fabrics and childhood. The daughter of tapestry restorer’s, Louise Bourgeois is incredibly creative in her use of fabrics. The exhibition displays a bewildering range of examples.  These often appear as the child in the womb. The pun on womb/ woven is deliberate I’m sure. This connection between the womb and the child as woven by the mother is extended throughout the exhibition in surprisingly original ways. The umbilical cord recurs again and again. It is a mixed blessing. At once the giver of life, it also sets up life long dependencies which entrap both mother and child in mutual angst and anxiety. So the umbilical cord may be cut at birth but psychologically the cord casts a lifelong shadow. 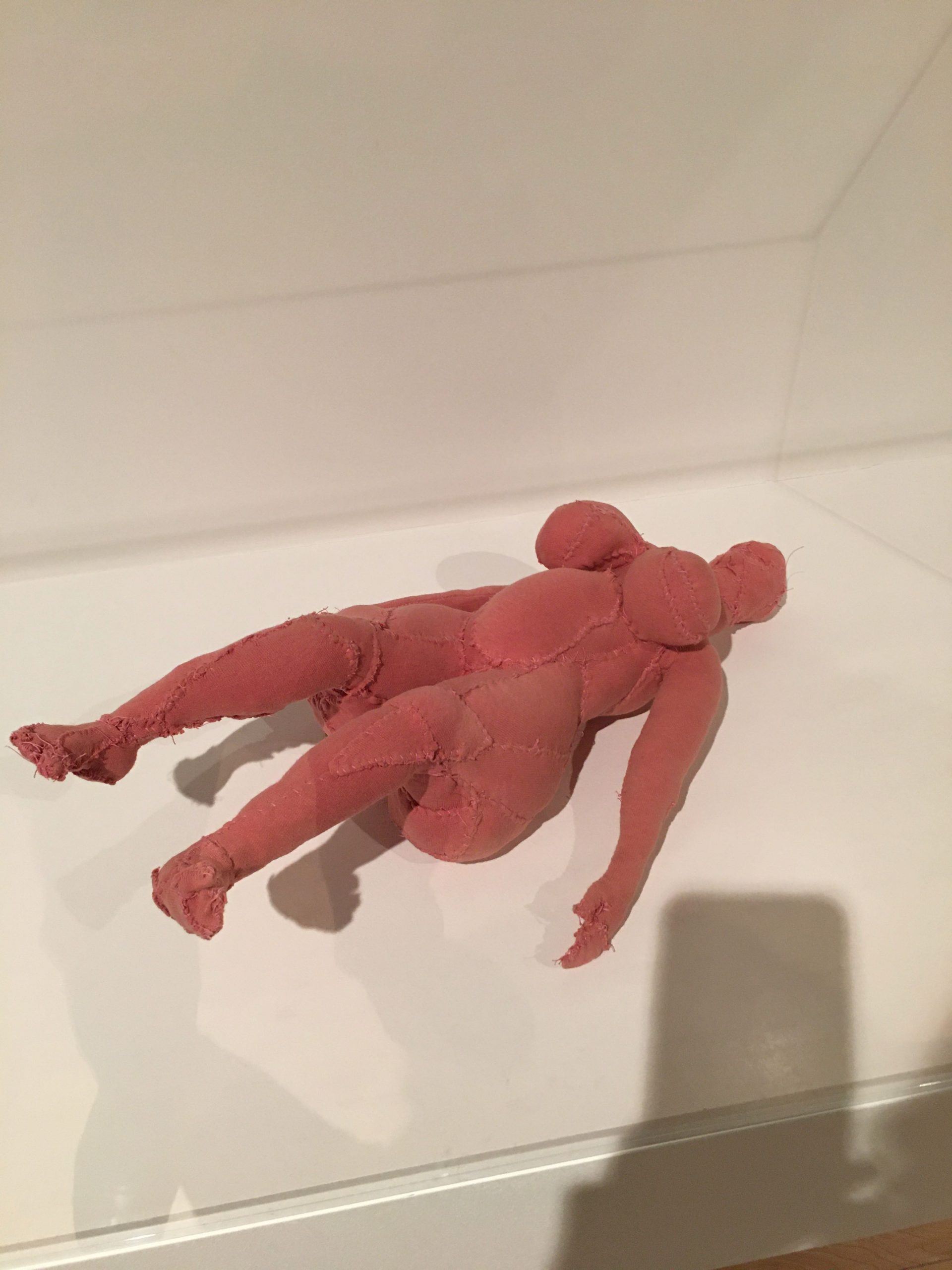 This theme of entrapment is disturbingly realised in her 1997 work “Spider”. Dominating one large room in the exhibition it really makes its mark on the viewer. A circular cage of wire mesh is topped by a giant spider with six legs. The spider weaves a web (the woven child) but also eats its prey and cannibalises its mates. It’s a fascinating piece which is hard to leave, I could happily look at it for hours. 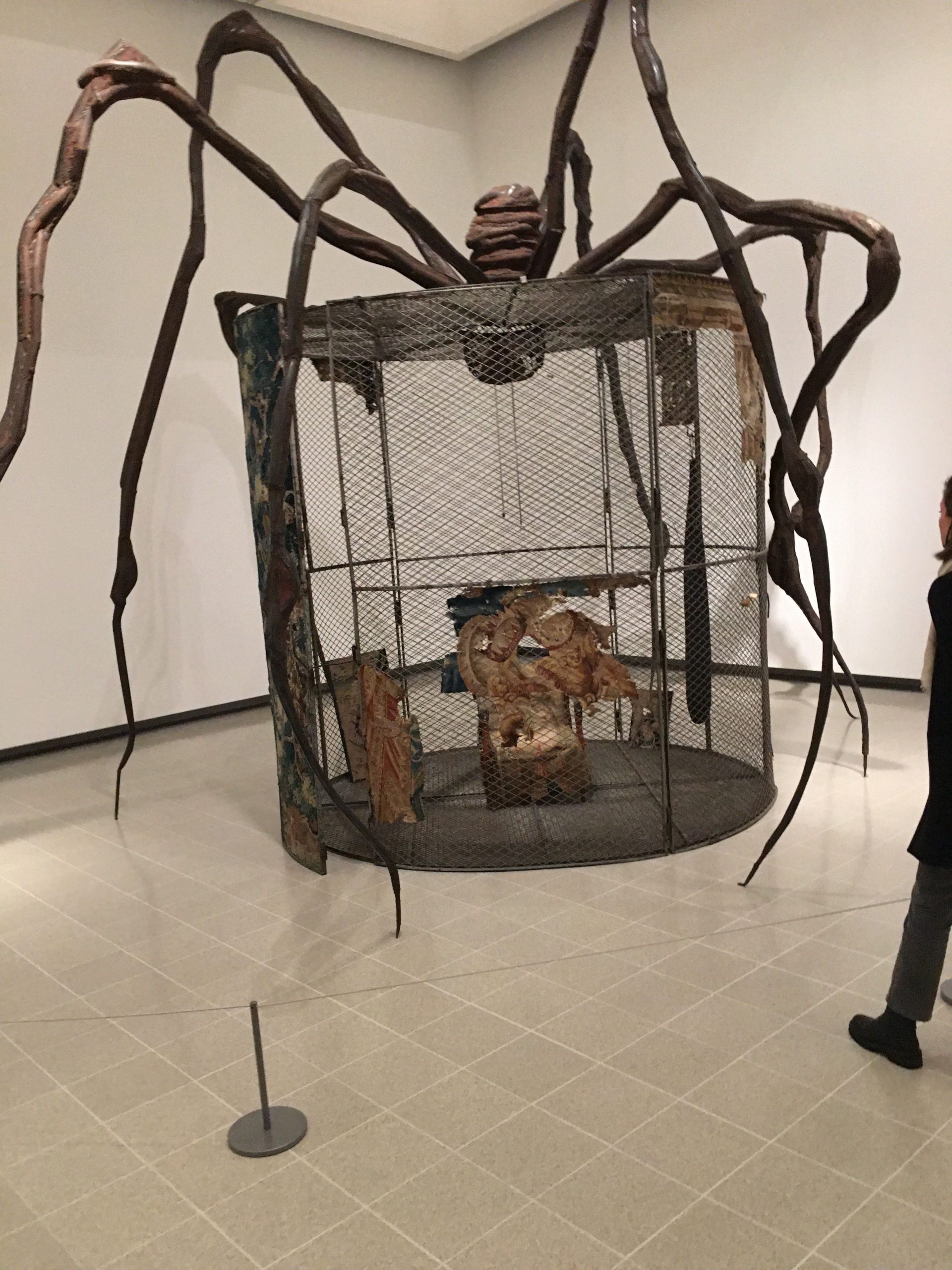 Bourgeois is outstanding at conveying boredom, ennui and unfulfilled lives. Her 2003 piece “Lady in Waiting” is Hitchcockian in its eerie and claustrophobic depiction of a woman in a box (a vertical coffin with a sash window) with metal spiders limbs radiating out from her body, is superbly  realised. Perhaps this is what Dickens’s Miss Havisham would’ve looked like had she’d carried on living?

There are moments of humour amidst all this existential angst. Two heads with tongues touching (Together 2009) stays in the mind:- 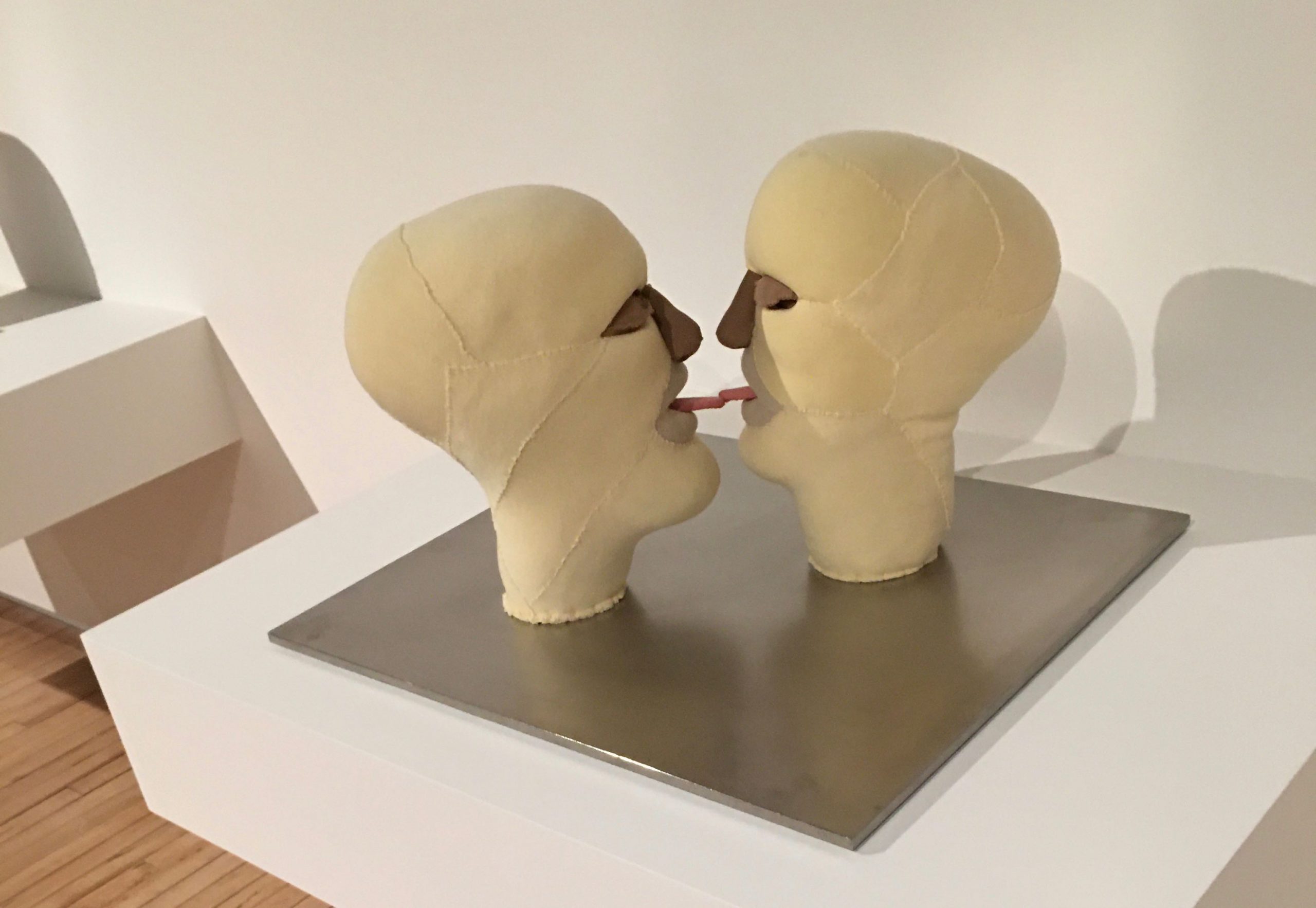 Or the smiling torso-woman with a pair of egg tongs (or is it a metal bra?) on her head lightens the mood wonderfully. The three headed standing figure “Hysterical” (2001) is a delightful re-appropriation and reinterpretation. And her “Couple IV” (1997) is sex as you’ve never seen it. Are they having fun ? That’s for you to decide. 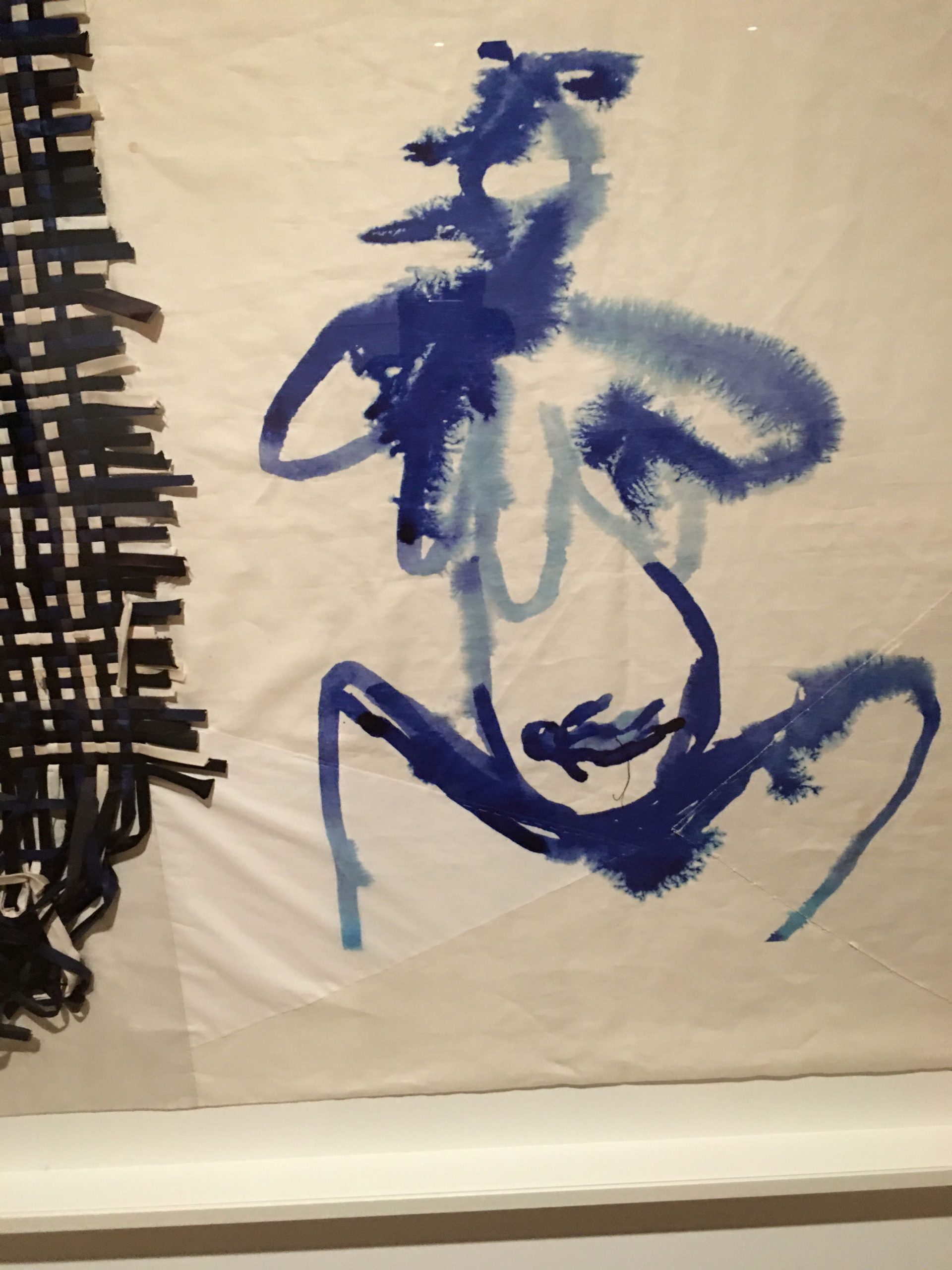 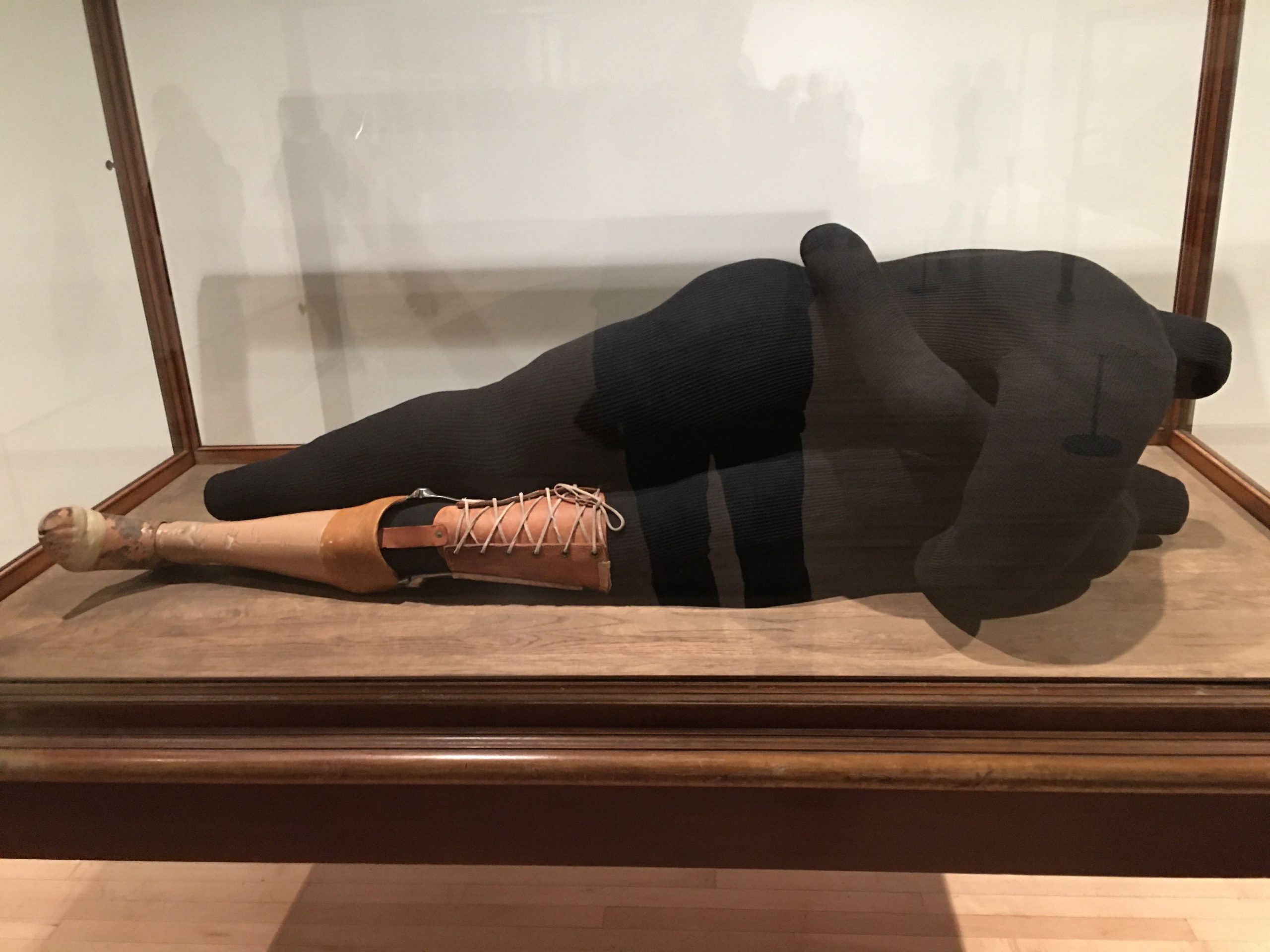