I am delighted to have been asked to be on the committee for a fashion show a girlfriend of mine is putting on in support of “Maggie’s” in February next year. Maggie’s Cancer Caring Centres is a charity that provides support, free of charge, for people who have been diagnosed with any type of cancer. The support is also for their families, their friends and their carers. Given that my father is currently being treated for bowel cancer and a good friend is fighting breast cancer, the opportunity to be part of something that is truly making a difference is even more meaningful. Each individual person with cancer has to find their own way through the difficult path of their illness, but they all need information and reliable guidance.

I read in the Maggie’s 2008/9 Annual Review a quote from an older man with secondary lung cancer:-

“Cancer focuses you remarkably. You learn what’s valuable in life. It makes you realise that there’s no material stuff that’s valuable. Everything from daffodils in Spring to grandchildren: that is what’s important. The latest car and television don’t matter”

It highlighted to me how everybody deals with things in different ways, because when I went to see my father in hospital last week he said “next time you come can you bring me a glossy car magazine, I’ve decided to buy an Aston Martin” (note my mother not happy with idea as he would probably have to sell the house to finance it and no mention so far of the grandchildren!).

Maggie Keswick Jencks (who was also brought up in Hong Kong) founded the charity with her husband after being diagnosed with breast cancer when she was forty-seven. It was through her experience of living with cancer that she began to recognise that taking an active role in her own treatment, moving from passive victim to active participant was the single most important step in dealing with her illness. She held a profound belief that architecture and the environment could deeply affect how you feel. She also became aware that having been diagnosed, there was no one place or person to turn to to get the answers she felt she needed.

Yesterday I went to see Maggie’s London Centre which was designed by Sir Richard Rogers and is situated in the grounds of The Charing Cross Hospital in Hammersmith. The building is truly amazing – a calm and tranquil space with lush green foliage both inside and out – a real haven. It recently won the RIBA London building of the year award and is on the shortlist for the prestigious Stirling Prize which will be announced next month. 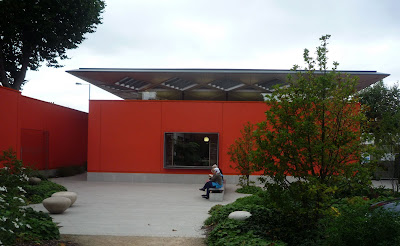 The kitchen is the heart of the centre, giving it a very homely feel with lots of people sitting around a large table drinking tea and eating cakes and chatting and laughing:- 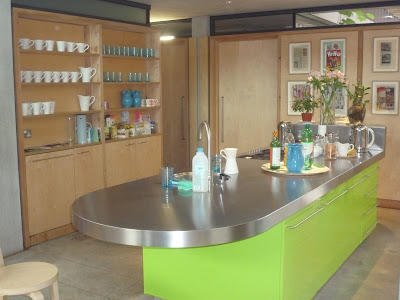 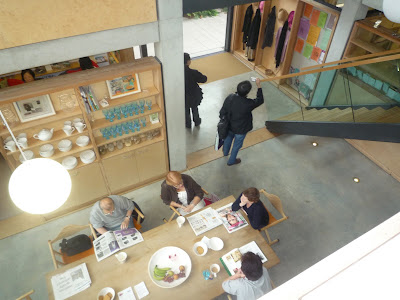 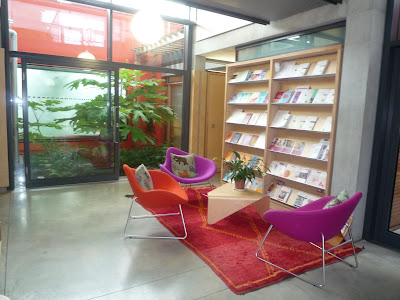 Once there the support you can receive ranges from one-to-one psychological support, weekly support groups, nutrition courses, benefits and welfare support, social and online support and relaxation and stress management.

All Maggie’s Centres in the UK are built adjacent to major cancer treatment hospitals but operate independently of the NHS. Their vision is to open centres next to every NHS Cancer hospital around the country: 5 are in progress in Oxford (this one is being built like a treehouse with wood made by local boatbuilders), Newcastle, South West Wales, Cheltenham and Nottingham. Internationally plans are in place for further centres in Hong Kong, Barcelona and Denmark.

What a difference that will make.

I live a skip & a hop away from Maggies CC and watched the progress of the building over many months! Nice to see some 'inside' pics: have always been curious re. what it looks like on the inside and have contemplated wandering in and having a peek on many occasions. ps. fabulous charity – I'll buy a ticket!

Brilliant – you're very welcome to come with me – tickets £195.00 each though (after show party included and food and drink! and all money to charity)

Perfect! I love food and drink and after-parties! And what excellent timing … have just finished a big jar of Nutella (not all at once) so am going to use it to collect spare pennies btwn now & then….

A girlfriend of mine (aged 40) is being treated for aggressive breast cancer and is spending a lot of time at Maggie's at Charing X hospital. She says it has been a lifeline for her and her family.. she's had massage, aromatherapy, manicures and been treated like a human being not a victim. They even sorted out her wig – she is Indian and had the most beautiful long, black glossy hair.. and they've managed to match it brilliantly.

These places renews one's faith in mankind and should receive more credit. I'll give a donation if you are collecting at any point.

thanks BM – yes, I completely agree – that's great it's been such a lifeline for you friend – do you want to come to the event? Could be a post baby treat? Lx

good luck, with this, very worthy…very high profile down south too it appears…

Hey may I quote some of the content found in this entry if I link back to you?

The blog was absolutely fantastic! Lots of great information and inspiration, both of which we all need!