"PLAYER OF THE YEAR" AWARD

I have had one of those busy sort of parenting days – children needed bags of kit this morning for virtually every sport known to man: football, cricket, tennis, gym, and swimming, my daughter needed spare clothes because she is staying late at school to show prospective parents around and then there is of course the dreaded packed lunch. I rushed them all off to school and then had to teach quite a few classes back to back.

Here I am with a half hour window of opportunity before I have to go and get kids from 93 different locations, cook supper for 6 (book group girls coming over) and attend my 7 year old’s football presentation evening tonight (yawn). It is his first one (and about my 98th). He is so exited. Because his older brother is now playing in a cricket match we have invited one of his friends to come instead. I thought it would be simple. I was to pick him up en route and drive to venue because we wouldn’t have much time after all other activities. But no, we can’t do that. We have to come home first because apparently they have to “gel their hair”. “He doesn’t know how to do it” my 7 year old told me “and he really doesn’t like his hair at the moment so I said I’d do it for him”.

He is hoping to win an award tonight. I know that perhaps I should be more positive, but I’m just being realistic. He has high expectations because his older brother is an exceptionally good athlete and just this morning he pulled a splendid trophy (see below) out of his bag as he packed his bag for school “oh yeah, forgot to tell you I got Player of The Year award again”. He gets it every year. Without fail. It’s completely brilliant and I’m very proud of him. The problem is he makes it look too easy. 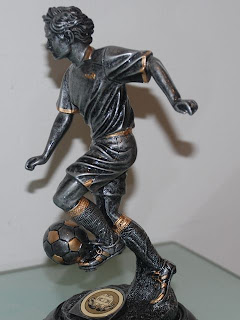 I can tell you that if I’d won that award it would have been a different matter. I’d have phoned my parents in France, called all my friends, insisted on photos, blogged about it…it would in fact have been my biggest achievement to date. I’ve never won a “Player of the Year” Award. It’s not fair.

I will be just as proud of my 7 year old if he doesn’t win any accolades, obviously. He tries his best and he too is a team player. I just hope that he won’t be too disappointed.

Hope you both enjoy the evening and you’ll be there for him, to explain all that, if he doesn’t get an award. He’s very lucky to have such a caring Mum. Flick xx

I hope everyone had a good time either way, but I further hope he got an award.

And incidentally, I would pay to see a children’s cricket match! It would be a novelty over here (one which I’m sure has long since worn off for you).

I’ll be back again, thanks for the info.