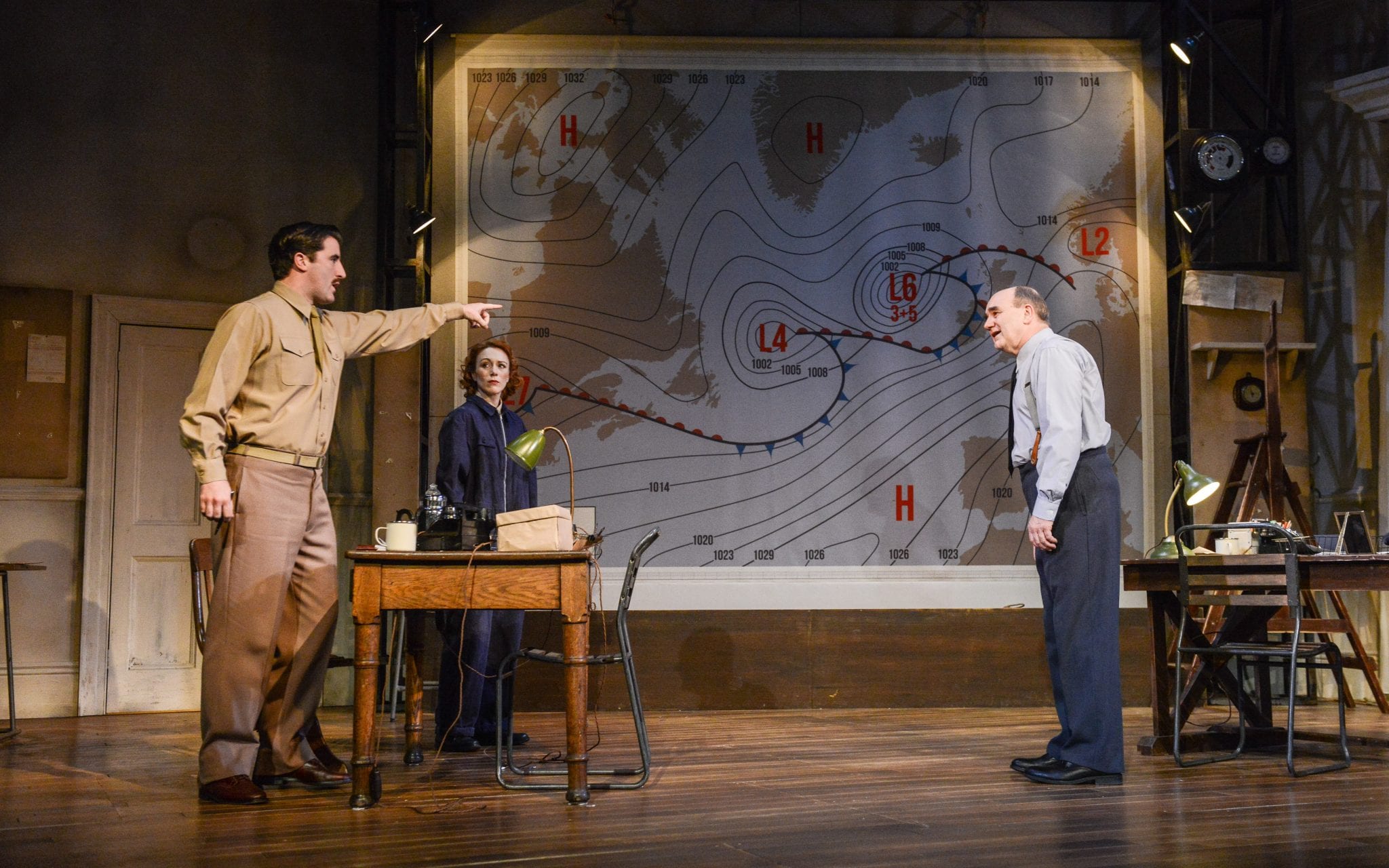 “Pressure”, written and starring David Haig is a “thriller about the weather”. It’s about James Stagg (David Haig) the weather forecaster for D-Day, Monday the 5th June 1944. He averted a catastrophe and saved 80,000 lives by persuading General Eisenhower (Malcolm Sinclair) to delay the invasion, against the advice of the American forecaster Irving Krick (Philip Cairns). 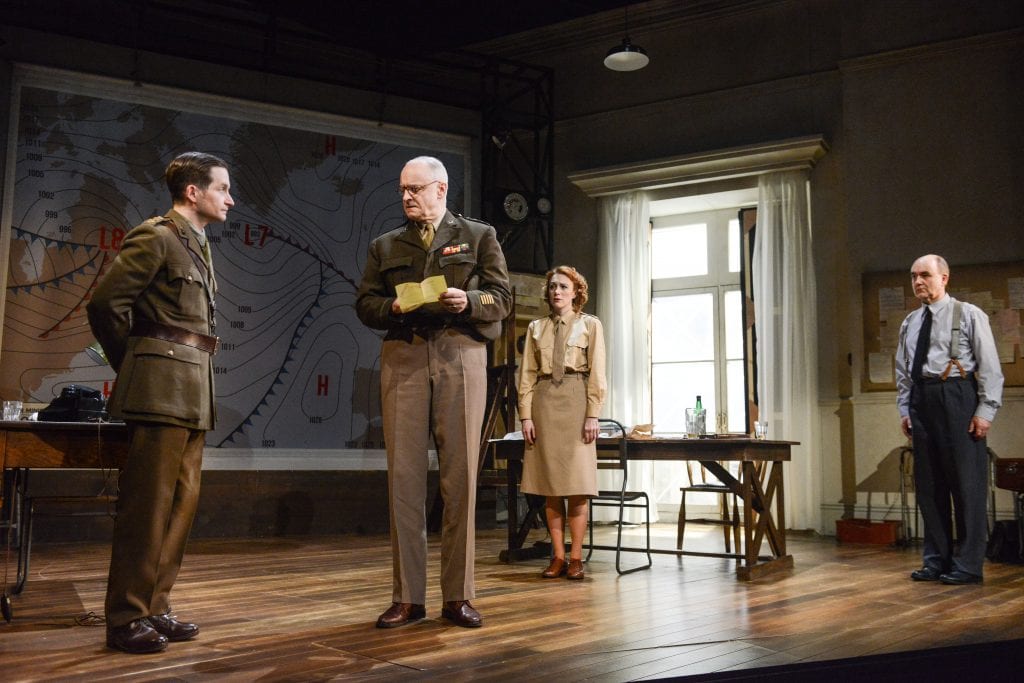 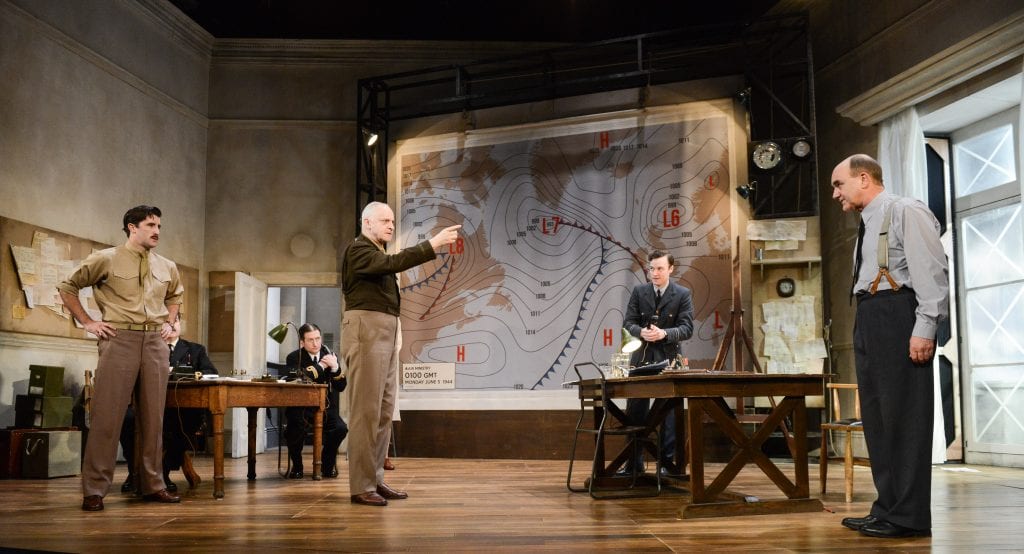 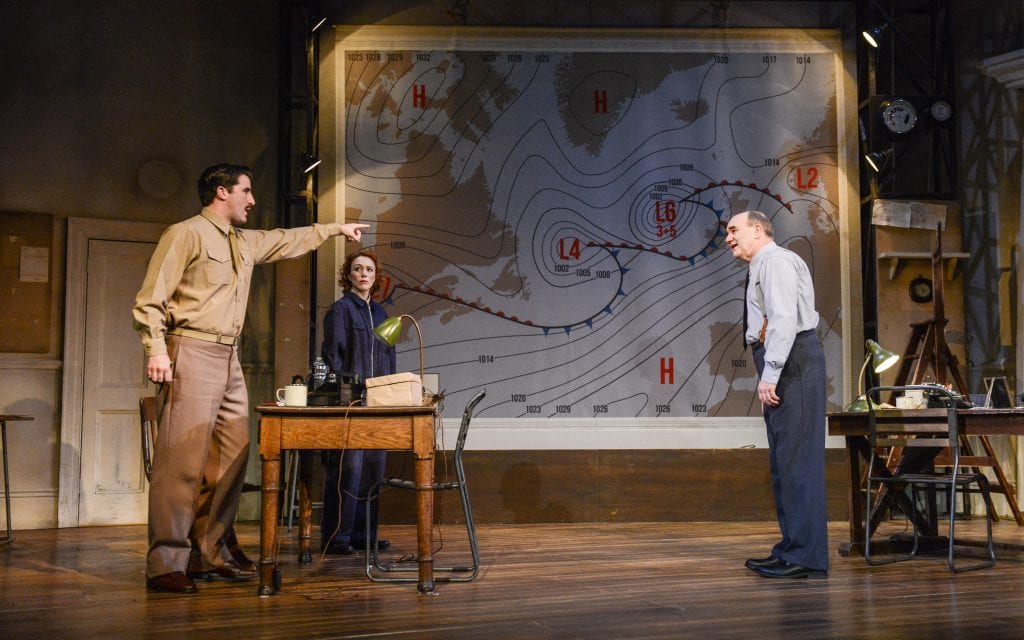 “Pressure”, catch it if you can get a ticket all this week at the Richmond Theatre, is utterly absorbing top quality drama, written by David Haig, who is best known for his play “My Boy Jack”, made into a film starring Daniel Radcliffe as Jack. The title is a pun on “Pressure” as in high pressure weather systems but also pressure in human relationships. The director, John Dove has done a brilliant job of seamlessly bringing together these two senses of Pressure to create a simply marvellous play. The set is a sparsely furnished room with a large map of the north Atlantic covered in the paraphernalia of weather forecasts, arrows, isobars, numbers and so on. We become gripped by these charts as the play unfolds from Friday 2nd June to Monday 5th June. They change every eight hours in real time and about every twenty minutes in play time, as it were. We become transfixed with every minor change in the location of the storms labelled L1 to L6. Are they getting closer? Will they arrive before Monday? As I say, it is surprisingly absorbing and gripping, edge of the seat stuff. 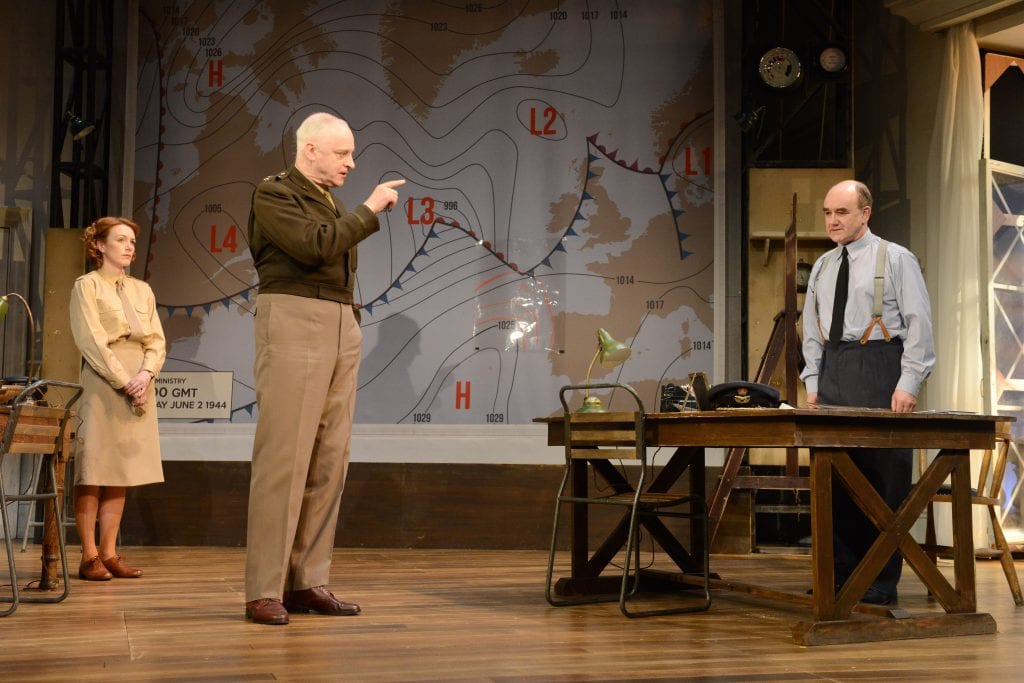 There are four main protagonists in “Pressure” and two plots. The first plot pits James Stagg against Krick (Philip Cairns) in the battle to persuade General Eisenhower. This is a classic Old World versus New world playbook. Krick stands for the American optimistic can-do philosophy and so advises Eisenhower to go ahead with the D-Day invasion as planned. Stagg represents the old world’s caution and scepticism. There is a great scene where exasperated by Staggs arguments, Krick says “I’m sick of your Scottish Highland gloom”, Stagg replies “I’m not from the Highlands”,  Krick “ok your Lowland Gloom”, Stagg, “I’m not from the lowlands, I’m from the central belt near Edinburgh!”  Then in a line that gets the biggest laugh of the night, Stagg explains the British weather to Krick and Eisenghower. “Have you ever”, he asks them, “stood on the beach at Hastings? The morning starts off with bright sunshine, by noon its dark clouds, horizontal rain and ten feet waves, then by four in the afternoon its glorious sunshine.” 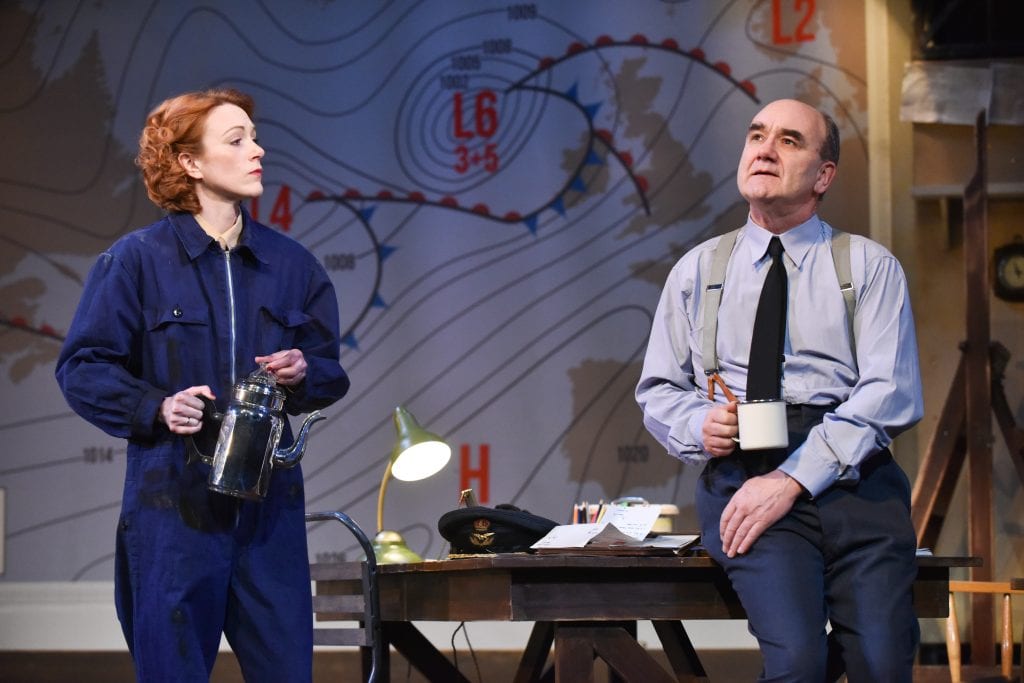 Into this battle enter Kay Summersby (Laura Rogers), the beautiful Irish assistant who was Eisenhower’s chauffeur, secretary, cook and possibly lover. She and Stagg get off on the wrong foot, Stagg’s first words to her on meeting her in his room “Are you supposed to be here?” She insists on his saying “please” before she will get anything for him. It’s a battle of wills reminiscent of Shakespeare’s “The Taming of the Shrew.”  Nevertheless a grudging respect develops between the two and it does so because of the second plot. This is the personal anguish beneath the public personae. Kay is deeply in love with Eisenhower, but she fears he will abandon her. Stagg is worried about his wife who is eight months pregnant and has high blood pressure. The weather analogy again. They have already lost one son. A four year old boy. Echoes here of “My Boy Jack”. In a brilliant scene, Kay shuts a shattered Stagg down and persuades Eisenhower to let her leave the top secret camp and go visit Mrs Stagg so that she can reassure Stagg that his wife is ok and thus enable him to focus on his forecasting. To do so she reminds Eisenhower that he too has lost a son. In this one moment we see the vulnerable and fragile human being behind the grandiose public personae. 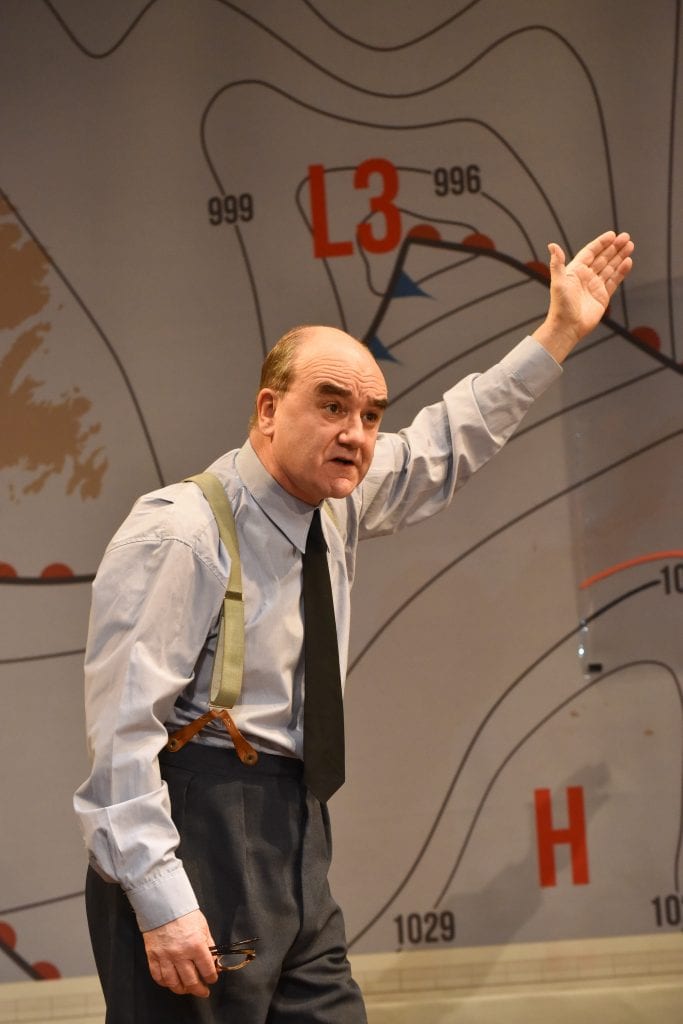 This constant movement between the public mask and the private vulnerability is what makes “Pressure” a truly outstanding play. The emotional and psychological depth of “Pressure” is profound on many levels. For example at one point in the midst of desperately trying to convince Eisenhower of the seriousness of the storm Stagg takes a telegram, he glances at it and puts it in his pocket without comment, Kay asks him what it is but he remains silent, yet we know that it’s about his wife and that he is terribly anxious. It’s a wonderful vignette. 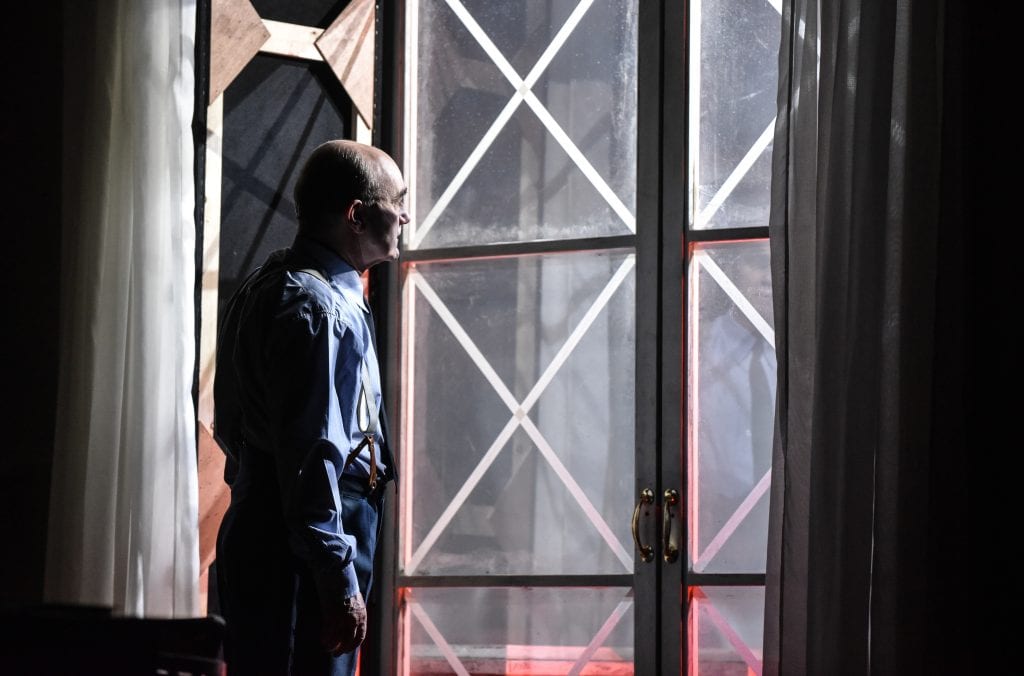 David Haig is clearly a genius, a polymath, a renaissance man, writer, actor and much more besides. With strong performances from Philip Cairns, Malcolm Sinclair and Laura Rogers in addition to the magic of David Haig, “Pressure” is a must.

Catch it if you can.