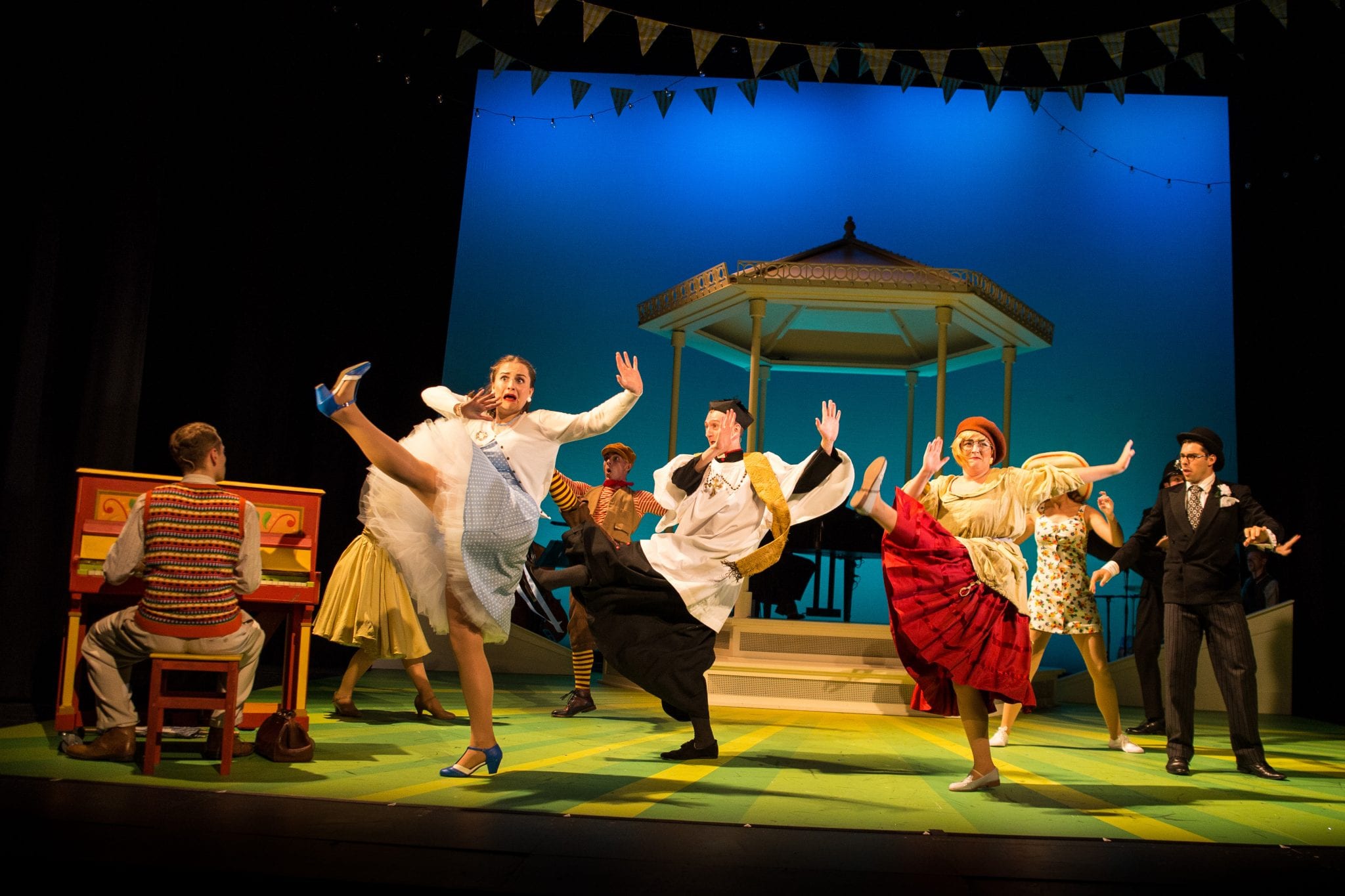 My friend John O’Brien went on my behalf to review Salad Days at Richmond Theatre, on this week.

Salad Days is an utterly delightful musical comedy. Written in 1954 it is has become a classic of English wit and whimsy. It is said to be The Queen’s favourite musical. It captures an England of 1950s nostalgia, innocence and naivety. Produced a year after the Coronation of 1953 it caught the Zeitgeist and helped fuel the optimism and sense of a new Elizabethan era for Britain after the miseries of the Second World War and rationing. Salad Days manages to combine the best of the past with a sense of optimism for the future. It’s a musical full of joy, humour and ridiculousness – in the best sense of that word, farce and fun. Written by Julian Slade (aged 24) and Dorothy Reynolds, Salad Days is a one off gem. A masterpiece of English musical comedy.

Bryan Hodgson’s direction is superb. Pacy and punchy he creates a momentum which gives the show boundless energy and vitality. Mike Lees set, putting the bandstand centre stage gives the show a focal point and creates a sense of timeless Englishness. But it’s the piano Minnie that is the key stage prop. A upright on wheels Minnie is a magical piano which has the power to make all who hear her sing and dance. This brilliant conceit is at the heart of Salad Days. The message is clear, the only way to get the English to let their hair down is to make them do so. This is wonderfully realised in the show stopping: “Oh Look at Me, I’m Dancing” in which policemen, clergymen, diplomats, businessmen and other representatives of the Establishment all breakout into song and dance under Minnie’s mesmerising, magical, mysterious, melodies. It’s so funny and so uplifting. Worth the ticket price alone. 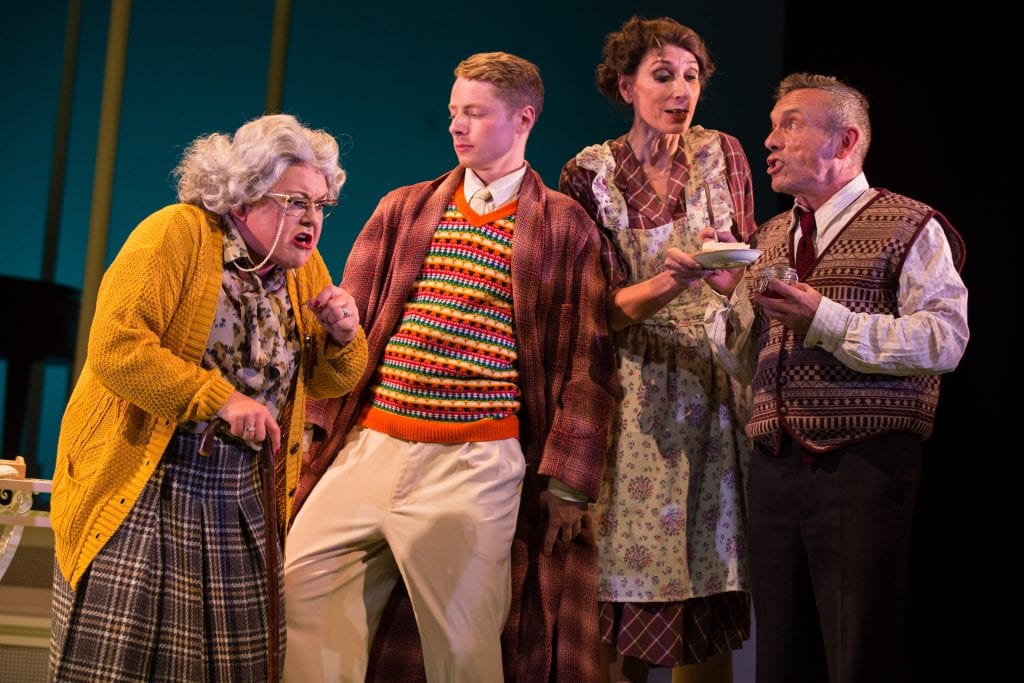 The cast is superb. Lewis McBean as Timothy and Jessica Cnoll as Jane are just right as the lead young couple. They are both a triple threat: that is to say they can act, sing and dance. Superb. Wendi Peters gives a comic masterclass as Lady Raeburn, a cross between the pomposity of Lady Bracknell and the pretensions of Hyacinth Bucket. Look out for the hairdresser scene. Nathan Elwick is hilarious as Constable Boot the laughing, dancing, all singing Policeman. Dan Smith’s Tramp adds a tinge of melancholy and Callum Evans gives a Harpo Marx like feel to Troppo. 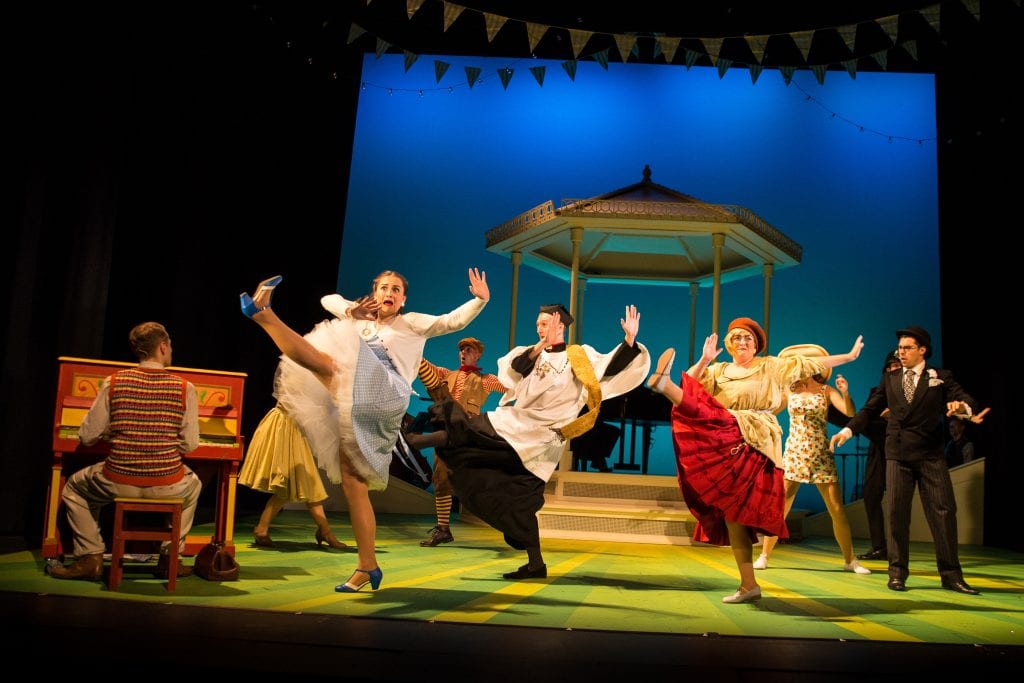 A seven year old Cameron Mackintosh was taken backstage by Julian Slade and in fact became his mentor until his death in 2006. Richard O’Brien took inspiration from Salad Days for The Rocky Horror Show. Princess Margaret saw the show on several occasions and came armed with a copy of the sheet music. At the end of a diamond jubilee extravaganza in 2012, Her Majesty left the arena as “We Said We Wouldn’t Look Back” rang out. Salad Days is a unique one off. This excellent production brings it vividly to life for us to enjoy.

I’m taking a leaf out of Princess Margaret’s book and going again tonight.