Every year 50,000 of our mothers, daughters, sisters and friends will be newly diagnosed with breast cancer. And every year 12,000 women still die. Breast Cancer Campaign would love to have you involved in the UK’s biggest breast cancer fundraiser […]

Well, apart from nursing a sore arse and a few blisters this morning it was more than worth it to walk the pink walk again yesterday to raise money for breast cancer research. The weather couldn't have been better and I just love the route - mostly along the river - spectacular. We did the 16 miles in exactly four hours. Thank you so much to all those who sponsored us so far - we've raised over £1,000 already so I'm very pleased. Hopefully they will reach their target of £1 million this year. 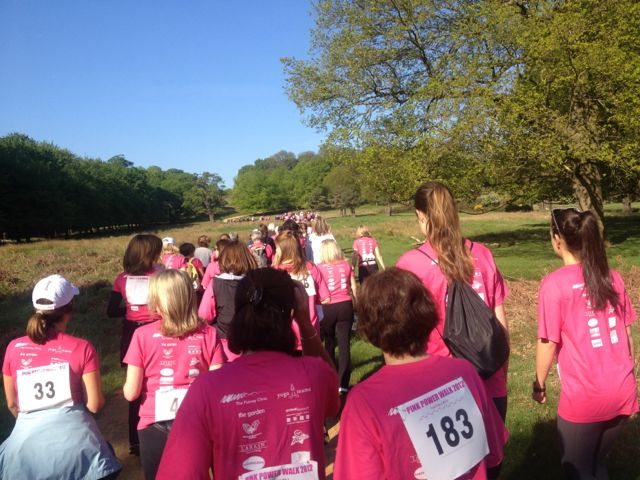 Just coming up to Hammersmith and following a pink wigged walker:- 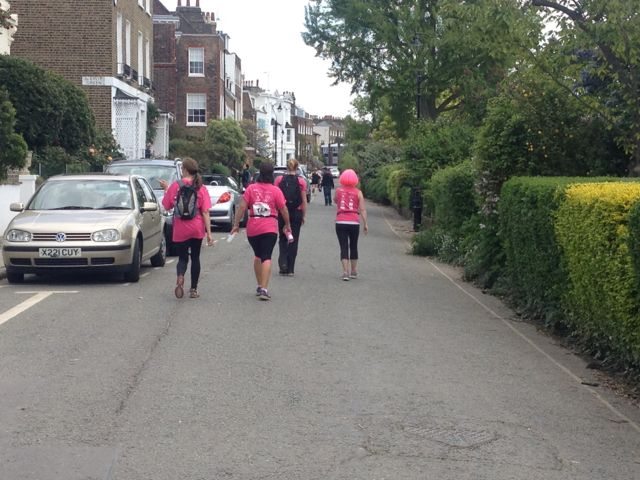 Don't the goody bags look fab (and the official photographer - my friend's daughter):- 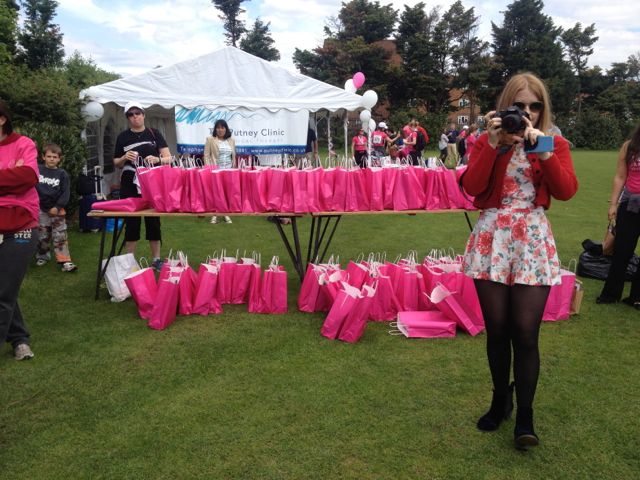 Gloria Hunniford giving an incredibly moving speech about why we were all there and how grateful she is to us all for helping support other families dealing with cancer:- 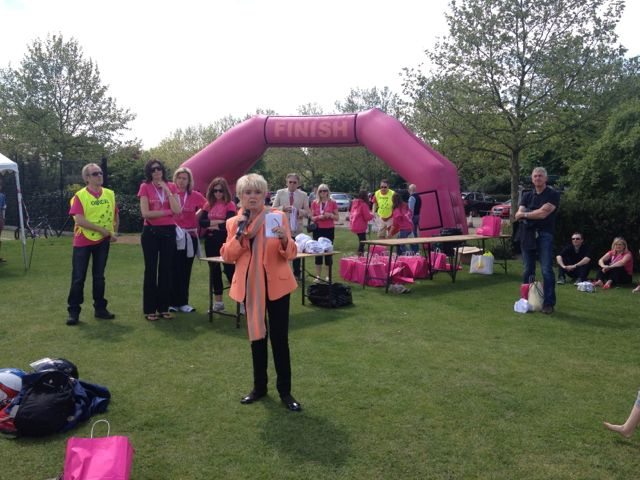 I was about to add a photo of my blisters and another my friend sent me of her bruised-soon-to-fall- off-toenail, but I suspect you might be sick. So I won't.  

It’s nearly here!! I’m not ready. I haven’t prepared. Done NO training this year. Never mind. I’ll get through it. As always. Buoyed up by the vast swell of pink (mostly) women to raise money for breast cancer research in […]

I am (sort of) in training for this year’s Pink Power Walk which is happening on Sunday 13th May. My daughter thinks it’s hilarious that I need to train for a “walk” and keeps asking me if I’m getting nervous […]

We walked the walk, again, yesterday – 16 miles to raise money for breast cancer. It was a glorious day, not too hot, but sunny. Everything looking splendidly green, in amongst the pink. We thoroughly enjoyed ourselves, did it in […]

More women are diagnosed with bowel cancer than with cervical and breast cancer combined and it is the third most common cancer in the UK and yet it has an extremely low profile presumably because there is a general reluctance to talk about it openly. Overall, bowel cancer kills 16,250 men and women a year. My father died of bowel cancer and it is very likely that he didn't do anything about his symptoms until it was too little too late. Most people don't know what the symptoms of this particular cancer are and the list of symptoms you find are unclear - so I'm going to tell you what the main symptoms are:- - A change in bowel routine - Bleeding from the rectum or blood in your stools - Extreme tiredness - Weight loss - Pain or a lump in the abdomen In a report online today a study suggests that the survival rate for bowel cancer surgery varies widely between hospitals - not good.

My beautiful friend - the one who isn't even forty yet, the one who hasn't even had her children yet, the one who was teaching a workshop and attending the Maggie's event with me just a few months ago, the one who loved and protected her husband with a passion I envied, the one who glowed with an inner light that everybody could see, the one who fought her battle with cancer with a grace and dignity and strength, the one who refused to be defined by her cancer, the one so lovely, so positive, so brave, that you felt privileged to have been part of her life; My beautiful friend, Has died. One of her last texts to me just before I went to Australia was:- "Safe travels. Have an amazing time. And make sure you just savour and enjoy every day you are there. Big love xx" Well if that's not a message we should remind ourselves of every day, I don't know what is. "We should all live as if we were never going to die, for it is the deaths of our friends that hurt us, not our own." Gerald Brenan

I have just taught my Tuesday morning class with a heavy heart. Because there was somebody missing today who couldn't come. A friend who has cancer. She texted me this morning with news of her latest scan results: "All bad news. Been in bad pain since Sunday. Yesterday was told liver not in good shape. They are moving fast with pain relief and start new chemo on Thurs. Won't be in class as parents coming over to try and help me / me try to help them and still in some pain. All cried and talked out now but will speak to you soon my friend. The girl ain't beaten yet x". And it made me cry. Because life is so unfair. She is so young. So beautiful. She's got one of those shiny souls that just ooze through every pore and she's done so well. In the time that I've known her we've worked together through one round of chemo strengthening and stretching her body, she's done a photography course, she's travelled the world with her lovely husband and she's now started the training to be an instructor teaching the same form of exercise as me. On Saturday, when we did a workshop together I encouraged her to take the whole class herself. I was there in the background to step in if she needed me, but she didn't - she did the whole two hour class without any help from me and she was magnificent. What a triumph of achievement. What a long way she's come. She of all people makes me wonder what life is all about. She has a strong faith and I believe that this has helped her hugely. She also has a deep internal strength and an understanding that sometimes she has to be stronger than she wants to be because of the people around her who love her deeply. You can see that from her text about having to try and help her parents. When I first met her I wouldn't have dreamt of writing about her on my blog. She was a very private person who didn't want to talk about what she was going through. Now it's different. We've spent a lot of time together discussing the various aspects of our lives. "Control the controllables" she has said to me on more than one occasion. I know she reads my blog and I hope she won't mind me writing about her, but she has her own blog now. Full of thoughts and recipes and stuff in general. She's come a long way in the time that I've known her and whilst she's got a long journey ahead of her she is still full of hope and surrounded by love. It must feel exhausting at times like these to have to keep going. To feel that you are up against another brick wall that you have to climb over or break through. She observed once that from the outside looking in, people assume that you are incredibly brave to deal with the shit that life throws at you, but that it's not really like that. When you are going through a trauma, you just have to deal with it as best you can. I have just read a fellow bloggers story - Rosie Scribble's post entitled Miracle Walker - all about her daugher's' struggle to walk - she makes some relevant points: "there was little choice but to face each day, no matter how tough life is, the world keeps turning and you just can't give up". So, my lovely friend, "When life gets tough, keep going, an hour at a time, a day at a time, one step at a time". We'll all keep going with you.

Today I am feeling very ashamed of myself. I have been selfish and childish and I wish to make a public apology. I have spent some of my day reading “Punk Rock Mommy’s” blog – the woman who is leader […]