I hate this stupid ongoing trend for Gap Year Travel. I wasn’t bloody allowed to have one – probably because they weren’t invented when I was their age, but honestly, it’s so traumatic for the parents, I think they should […]

I still have three children on their summer holiday – which seems longer than everyone else right? Hasn’t everyone else’s kids gone back to school now?? My son doesn’t start until next Monday – at 11am he tells me – […]

Not entirely sure what “Mosquito Day” is… except that it’s today. So Happy Mosquito Day to all – is it a mosquito appreciation day or more a malaria and Japanese Encephalitis awareness sort of day. The thing is, my youngest […]

I am thinking about hiring out my house to scientists who are interested in growing mould in petri dishes. I have rooms in my house that are virtually uninhabitable – my teenage son has been back two weeks and has […]

Here is my 19 year old son’s hot off the press guide to what to do and where to stay in Northern Thailand. If you’re on a budget – these hostels, sight seeing recommendations and bar choices are for you:- […]

It's 6am and I'm about to go off to the airport to pick up my son after 5 months away. Strange. I can't wait to see him and give him a massive hug and take the time to note those small inevitable changes in him as a person that occur inevitably after such a massive life experience. Thailand, Laos, Vietnam, Cambodia, Thailand again....how will those countries have seeped under his skin? No, I don't mean through wounds and sea urchin spikes and the warnings of tattoos that I've heard some of his mates have got and It won't be difficult to note the larger changes - he's got a plaster cast on his leg and will be on crutches, so I should be able to recognise him. I mean the actual character building, personality shift changing experiences. We'll see. SO. Enough musing. I don't have time. I've got to go. Get him back really quickly so no time for delays because I have work to do. Then take him to the hospital. Then a million things to sort in a hurry. Have to be vague for the time being. Have to talk about the weather and try not to worry too much. All my children were coming with me to the airport. They are hugely excited - especially my youngest child. He's missed him. He was going to make a big white sign with his name on - like the drivers do waiting at the arrival gates do - which I thought would have been really funny. But. In reality, now I come to wake them up I'd say the odds have dropped to 50/50. "Do you think it would be better if I stay here and make breakfast?" said my daughter sleepily from her bed.... It will be strange for him to be coming home after such a long stint away. My brothers did it all the time, flying from the UK to Hong Kong for holidays - I did it less, until I was 17 - and it always takes some adjustments and you have to manage doing WTF you like with living back at home. On the upside it's always so lovely to come home to those familiar faces, smells and your own bed. How long will it last before he is wishing he was in Ha Long Bay and I am complaining about all the washing? I will not complain. I CAN"T WAIT. Off now. First to reawaken the others.

He says this is the best £6 he's ever spent. Three bodies per elephant off for a stroll and ending up in the water:- 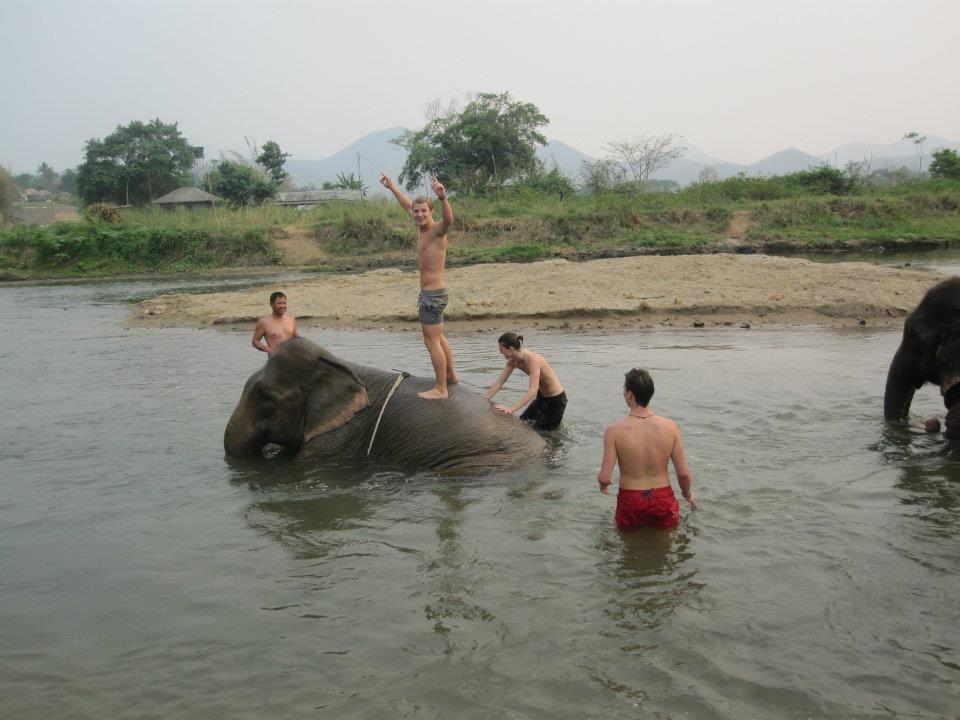 Even if they don't look particularly elegant:- 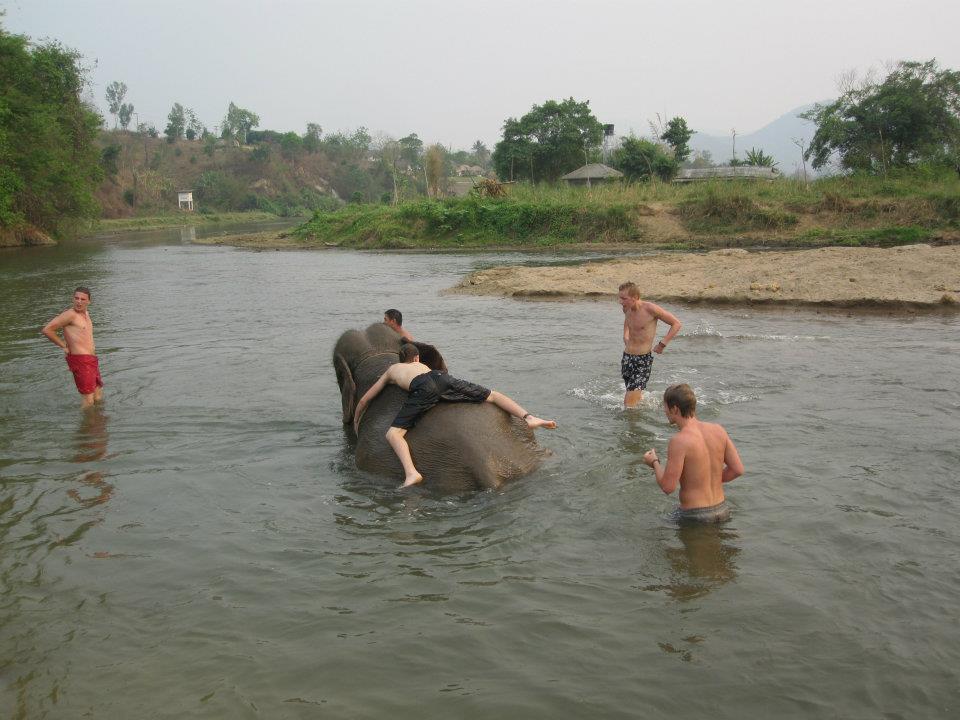 You can see why my son is feeling pretty chilled in Thailand right now:- 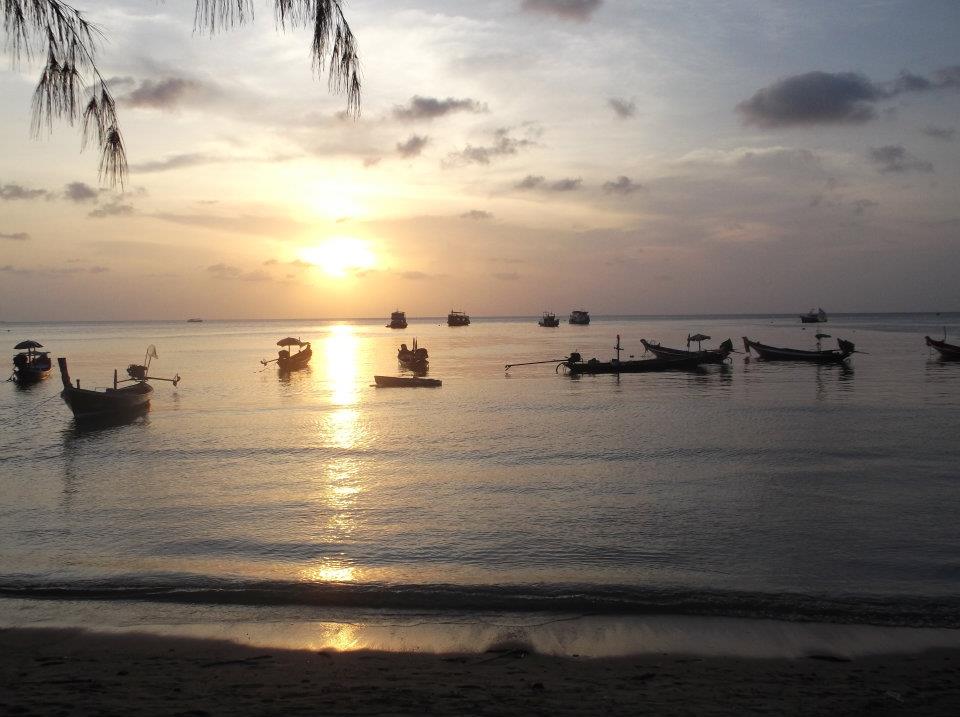 I have now deposited my daughter with my mother for two weeks. Not sure who will break first. She’s set up all her books and files by the window in the sitting room. I hope they don’t drive each other […]

A friend has just sent me the link to an excellent website from the Foreign & Commonwealth Office for anyone either travelling or living abroad:-http://www.fco.gov.uk/en/travel-and-living-abroad/staying-safe/Locate/ The countdown has properly begun for my son now. Visas mostly ready - although today he has gone to pick up his passport from the Thai Embassy and I'm a little worried because he has managed to lose the very important pink receipt he needs to collect it. Failing at the first hurdle does not bode well for the rest of his trip does it. What if they won't give it to him? Can't find it without the relevant number? Several other parents of the mates he's travelling with are now on a roll - they've had meetings, done spreadsheets (SPREADSHEETS??), shared insurance information and yellow fever stuff and I'm beginning to get gap year parent envy - or inadequacy - or something....I'm still hoping to sit down and watch "Midnight Express" with him - if only for that fantastic soundtrack, but other than that and vague mumblings about making sure all the boys check Adam's Apple's VERY CAREFULLY in Thailand and avoid getting drugged on coaches by refusing offers of food or drink, it's been a little patchy. He's talking a lot about the 12p bottles of beer in Vietnam which my friend pointed out must be made from old socks for that price - I suspect it's made from substances even worse than old socks. Still slightly of the opinion that he's a big boy now and should get on with it all himself but can't quite help wondering why I haven't done a spreadsheet yet and what would be on it. I have just gaily clicked on to "Travelling in Thailand" on the above mentioned website and got this and am now even more freaked out because he is going to be on that border they're talking about:- TRAVEL SUMMARY We advise against all travel to the Preah Vihear (Khaoi Pra Viharn in Thai) temple area and the Ta Krabey/Ta Moan temple area located on the Thai-Cambodian border due to the presence of troops in the area and the risk of outbreaks of fighting. Remain alert to the local situation when travelling in other border regions and at land crossings between Thailand and Cambodia. See Safety and Security - Local Travel - Cambodian border. We advise against all but essential travel to the provinces of Pattani, Yala, Narathiwat and Songkhla on the Thai-Malaysia border. See Safety and Security - Political Situation. There is a high threat of terrorism. Bomb and grenade attacks have been indiscriminate, including in places visited by expatriates and foreign travellers. Sporadic attacks continue in Bangkok and Chiang Mai. On 13 January as a precaution the Thai authorities increased security measures in Bangkok, following warnings of a possible terrorist threat. On 16 January the Thai authorities found a large supply of bomb-making materials in Samut Sakhon, 38km south west of Bangkok. You should exercise caution, especially in the cities of Bangkok, Chiang Mai, Chiang Rai, Khon Kaen, Ubon Ratchathani and Udon Thani. See: Safety and Security - Terrorism. Large areas of central, northern and eastern Thailand were affected by flooding between September and December 2011. The National Travel Health Network and Centre has issued advice and information about the possible increased risk from illness and disease in areas that have been affected by flooding. Contact your GP for further advice and information before travelling. It is not uncommon for political demonstrations to take place in Thailand, including in central Bangkok. You should avoid demonstrations and any other protests. By law, you must carry your passport with you at all times in Thailand. Tourists have been arrested because they were unable to produce their passport. See: Local Laws and Customs. Penalties for possession, distribution or manufacture of drugs are severe and can include the death penalty. See: Local Laws and Customs. Take out comprehensive travel and medical insurance before travelling. See General Insurance. Register with our LOCATE service to tell us when and where you are travelling or where you live so our consular and crisis staff can provide better assistance to you in an emergency. At times of heightened tension, we suggest you also follow the British Embassy on Twitter and Facebook. 847,198 British nationals visited Thailand in 2010 (Source: Thai Immigration). Most visits are trouble-free. See General - Consular Assistance - Statistics.