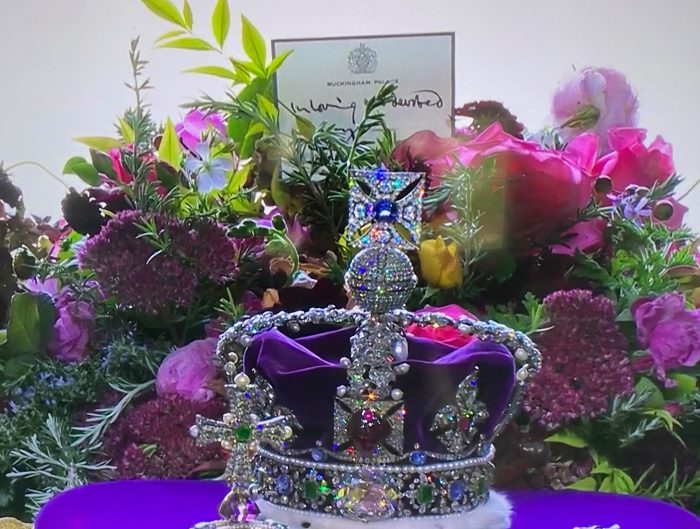 FAREWELL TO OUR QUEEN

There are no more words left to describe our nation’s collective loss of our Queen.  Her funeral was today and the whole world seemed to be there, an extraordinary collection of people all there to say a final farewell to […]

My mother has just phoned me. She’s watching a programme about the Queen (obviously) and all that Jubilee stuff and she said “you met the Queen in Hong Kong in 1975 and although she didn’t shake YOUR hand she shook […]

THE QUEEN IN RICHMOND PARK

Well that was exciting – seeing The Queen this afternoon in Richmond Park with the road lined with well wishers – lots of lovely little children with home made crowns and flags all cheering their little hearts out. All this […]

Probably should name it "Wet & Wild London" as the event, taking place in Richmond Park today is going to be very soggy all round. I've been watching the marquees and Helter Skelters go up all week. It's all been very exciting because THE QUEEN is coming to town today and there are loads of activities going on. I know this because my Goddaughter has been chosen to represent the school along with a few others and has been practicing bowing all week (even though her mother is a little concerned because she is obviously meant to be doing a curtsey). I told my daughter all about it when we drove past it the other day - "she will remember that forever - I still remember being chosen to meet the Queen when I was at primary school in Hong Kong - we all stood in a line and she shook the hand of both children either side of me - I think I was too nervous to put my hand out in time"..... "Which Queen was that?" she asked me. "Queen Victoria" I laughed, but secretly I was hugely offended, naturally. Yesterday they tested the very loud music system during my daughter's GCSE exams. Today all the roads are completely blocked because the park is shut and many children trying to get to school were delayed. I had to make my children walk in the rain because I was stuck. Normally not too bad a thing, but she's got her Biology GCSE this morning so it just seemed such a shame to not be able to keep her calm. There will be more music during the exams. Sometimes, I just don't think the Queen knows what us mere mortals have to go through just so that she can come and visit us.

ART LONDON 2011 Survival International has been chosen as one of the charities for Art London 2011. To coincide Ghislain Pascal, Director of The Little Black Gallery and long time supporter of Survival International, has curated an exhibition of photographs which will all be sold in aid of Survival’s work for threatened tribal peoples. The sale includes images by some of the greatest names in contemporary photography: Bob Carlos Clarke, Harry Cory Wright, Raymond Depardon, Duffy, Joey L, Chris Levine, Patrick Lichfield, Terry O’Neill, and Sebastiao Salgado. You can bid for all pictures by emailing gp@survivalinternational.org. All bids need to be received by 5 October, with the highest bid announced at Art London on 6 October. All pictures will be exhibited for the duration of Art London (6-10 October). They're not cheap but there are some unbelievably iconic photographs - you can see all the other amazing photographs on sale here: http://www.survivalinternational.org/news/art-london including one of Audrey Hepburn in the water, Jimi Hendrix, David Bowie, Stonehenge and many others including these two: