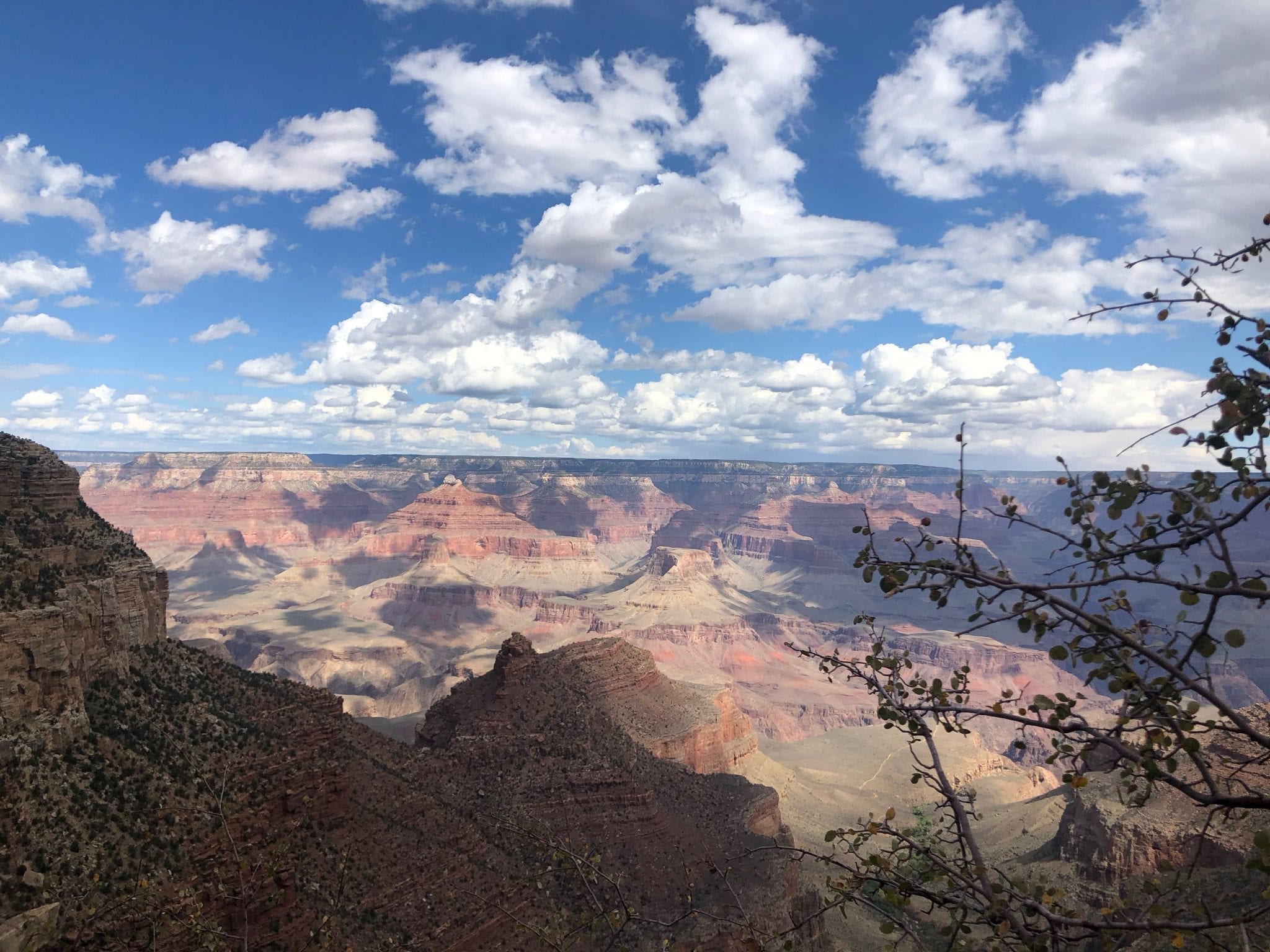 Today is the first anniversary of the gun massacre in Las Vegas when 58 people were killed by a lone gunman in America’s deadliest mass shooting from the Mandalay Bay hotel. Astonishing to think that Craig Paddock was capable of opening fire from the hotel on a crowd of 22,000 festival goers from one of the rooms and we felt the sadness and the shock. I have just come back from visiting Vegas for the first time ever and we were staying at the Luxor, the hotel next door. There were 65 of us in total, all on a work jolly. What an assault on the senses that place is, totally full on, 24 hours a day. Most of the hotels are designed to feel like it could be night or day the whole time and initially it all felt a little overwhelming and daunting, like you could get lost and never find your way back to your hotel room. I spent much time wandering round and round roulette tables and one armed bandit machines wondering where everyone else had gone. But, of course, I found my bearings after a few days and things started feeling a bit more “normal”.   Not that Vegas is normal in any way.  Known for it’s adult playground offerings, one night in Vegas can make or break you it seems. It takes no prisoners, is big and brash and nobody cares what you do or what you look like, but after a few nights you can slide under the superficiality of the glitz and the tackiness and find something that works for you. Something for everyone is certainly what Vegas can offer you and although the flight is ten hours it’s a very easy flight and whilst the time difference from the UK is eight hours, you’re so higgledy piggledy all over the place with your days and nights that it doesn’t really matter. Now that I’m back home, my body clock is too confused to have any jet lag at all!

The airport is very close to all the hotels and the heat when you first step off the plane, whilst intense is manageable, because it’s a dry heat and the evenings were lovely and warm to wander around in. We stayed up most nights, tempted by the draw of the roulette tables and time melts away at around the same speed as your money. I only had one flutter – put all my chips on the roulette table and lost everything straight away, so after that I spent my time watching how other people did it. I watched a judge, several lawyers and a doctor, who all come every year lose $1000’s. However, I’ll be ready next time and will also watch a few video’s to learn how to play Craps which seems to be the one you are most likely to win money on. 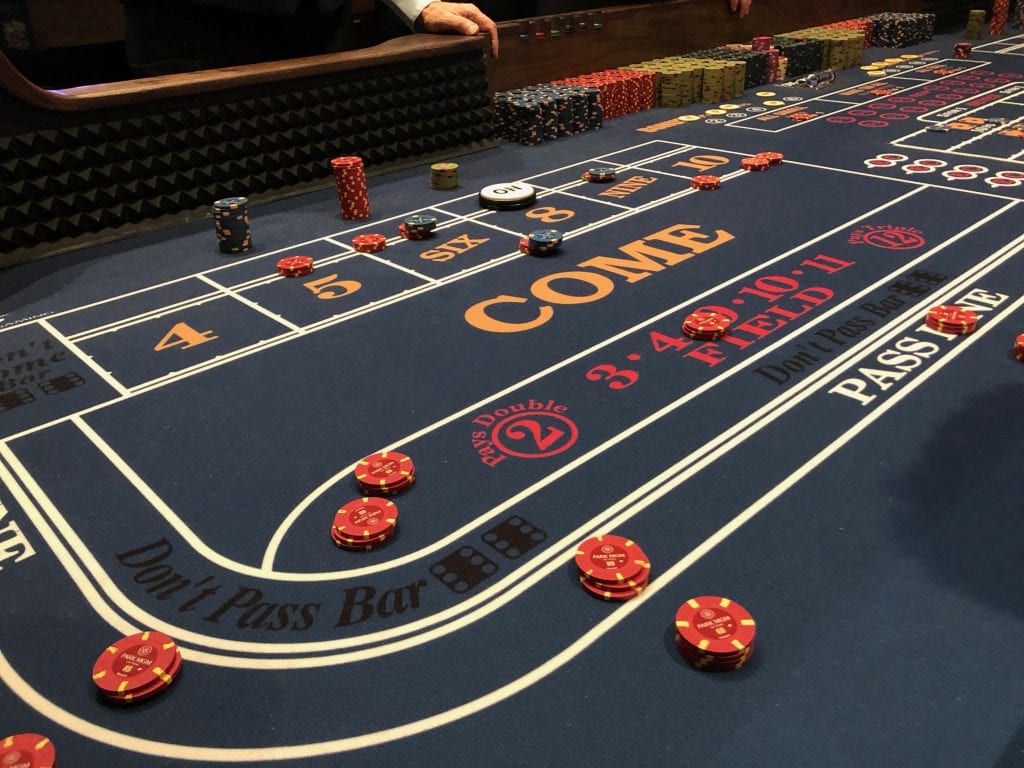 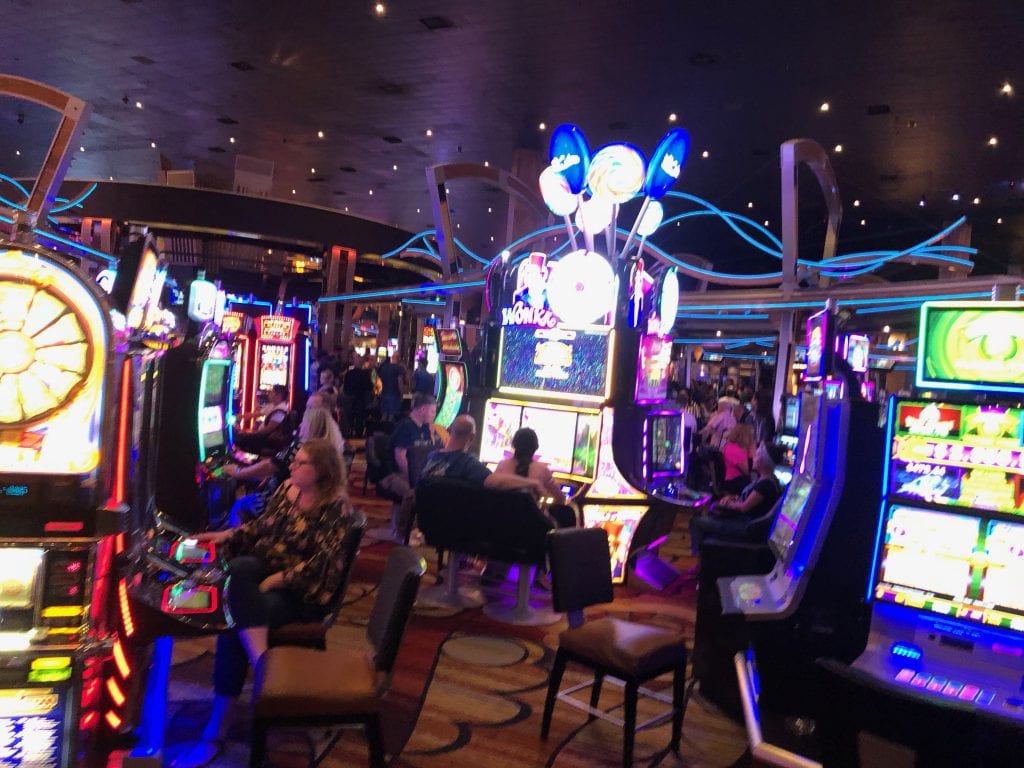 You can smoke in the casinos! 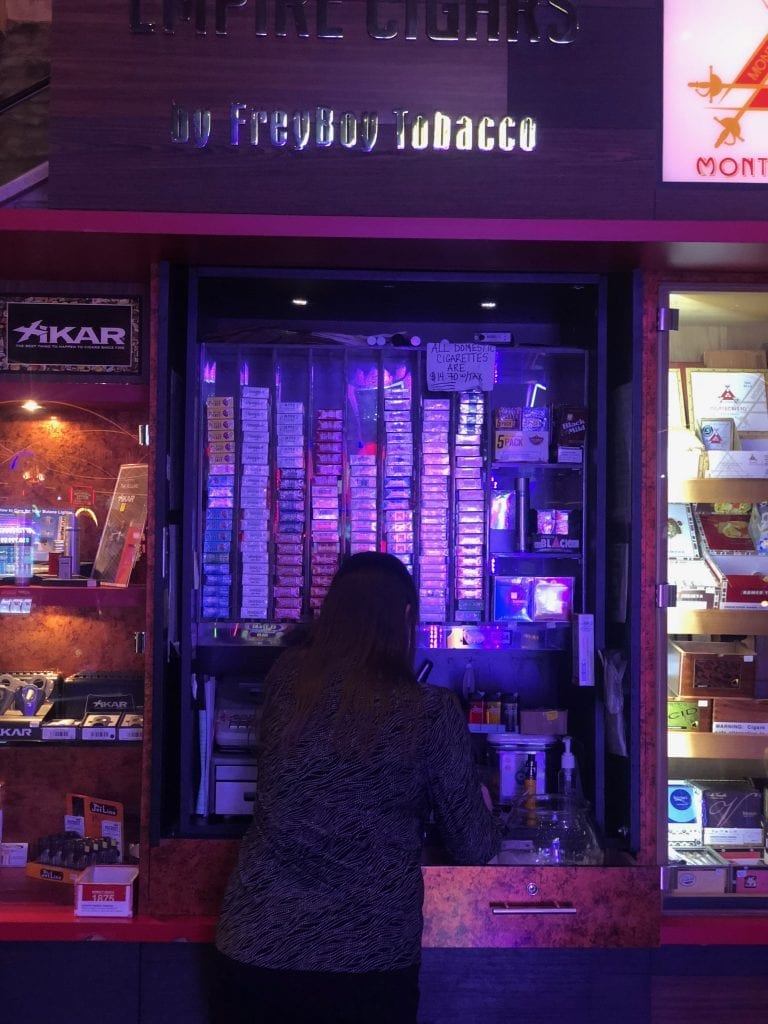 On our first full day there, the team divided up into groups for their various day trips. Having never been before, I naturally went for the tour of the Grand Canyon in a small Papillon plane and it was incredible, a very well organised set up. We flew over the Hoover Dam and the Colorado River which took around an hour before landing near the Grand Canyon and the scenery was stunning. We were then driven by coach to two different viewing points where we could walk around admiring the view. 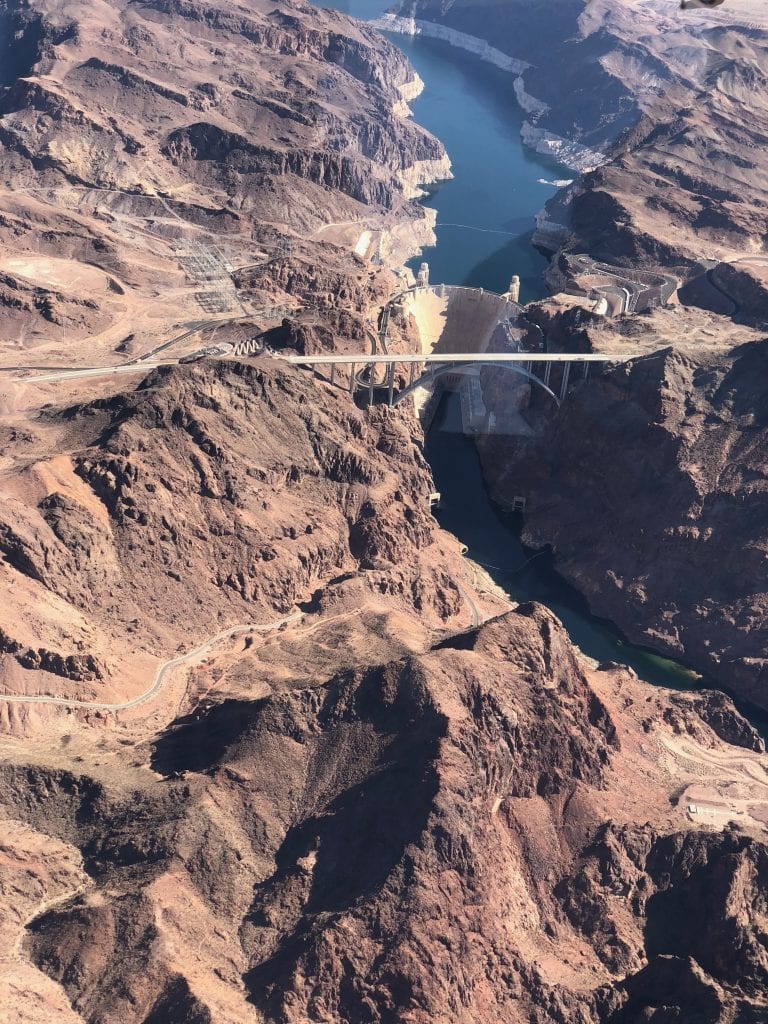 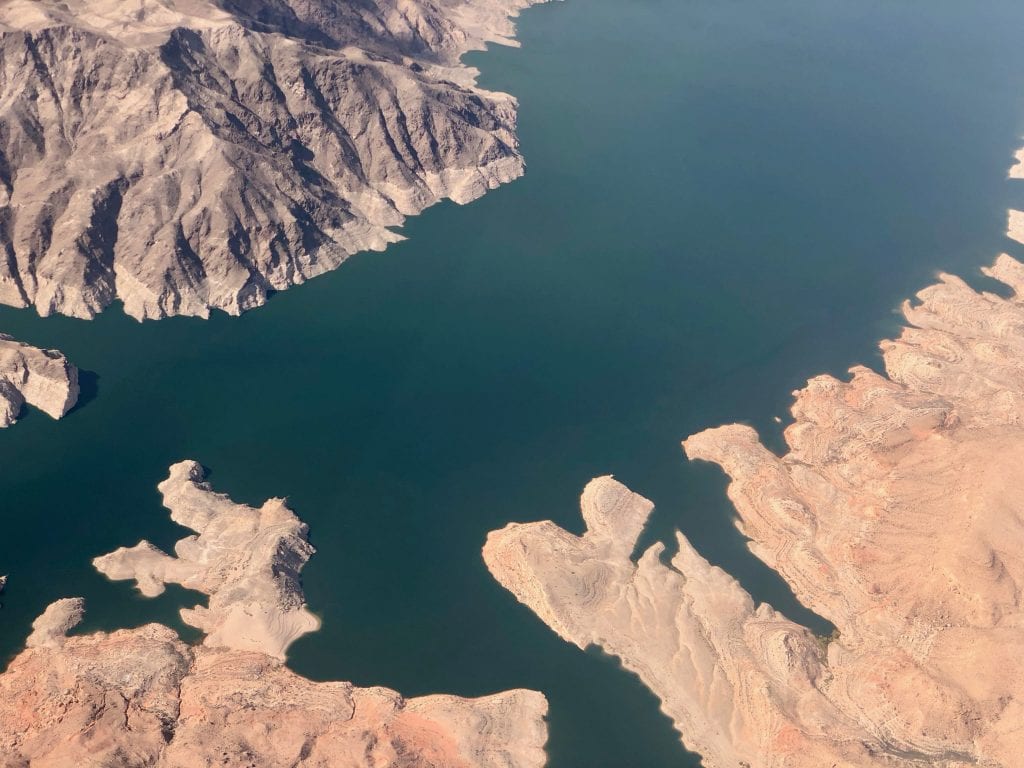 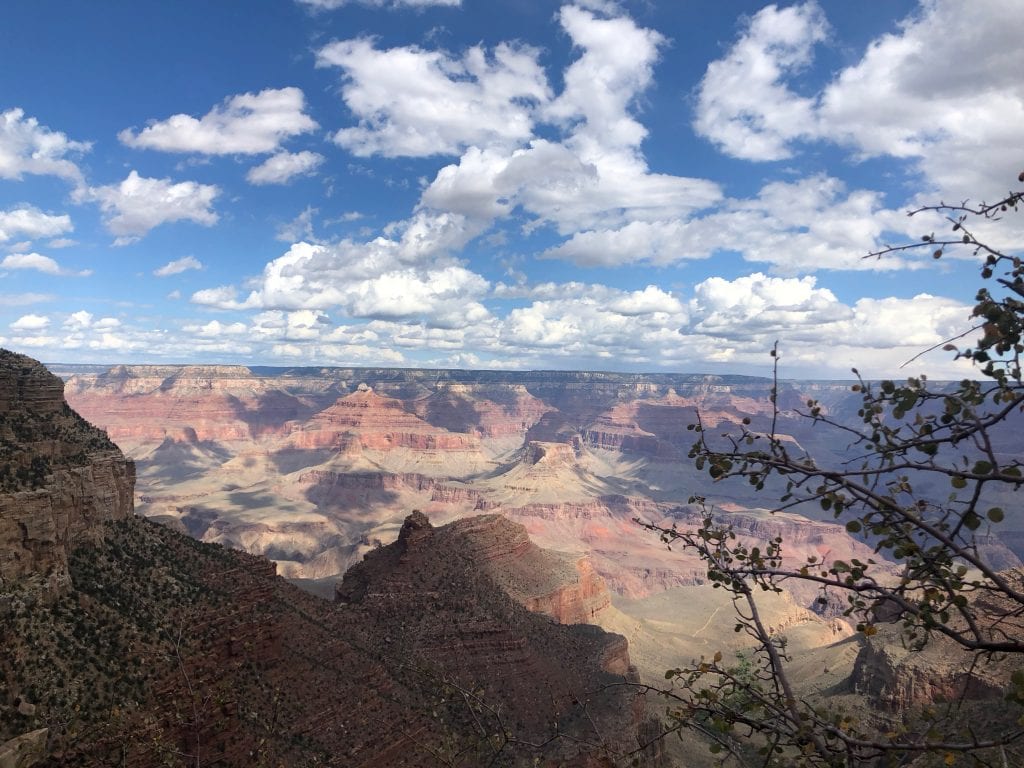 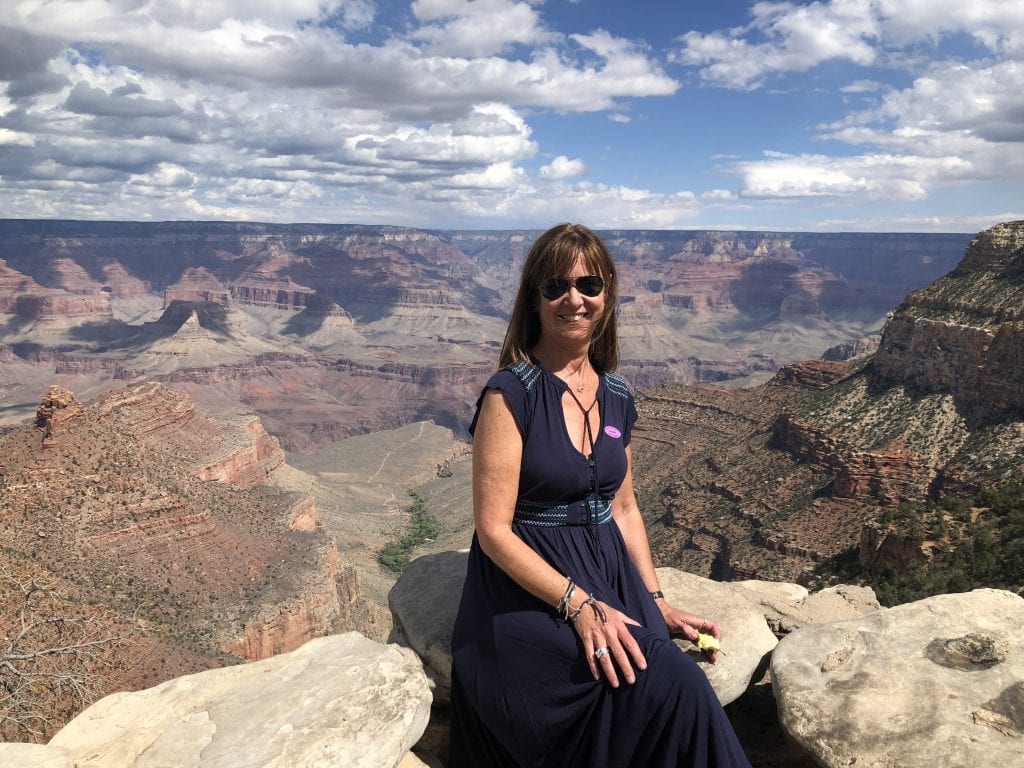 There was a thunderstorm in the Canyon whilst we were there – incredibly dramatic as the rolling thunder emanated and echoed around the space and lightening struck:- 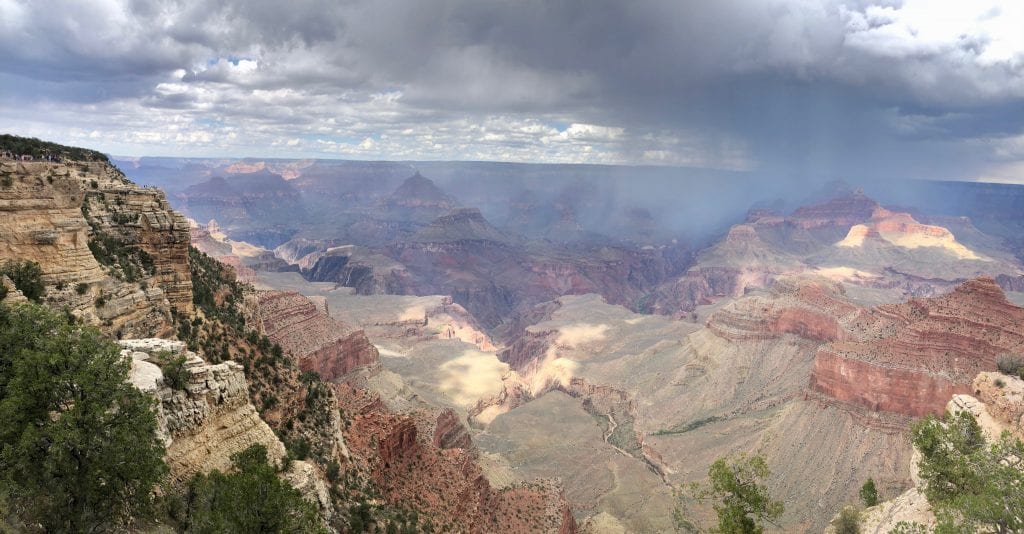 Another day we visited the Bellagio Fountains and enjoyed the spectacle from the terrace of the Lago restaurant where we had delicious Italian food:- 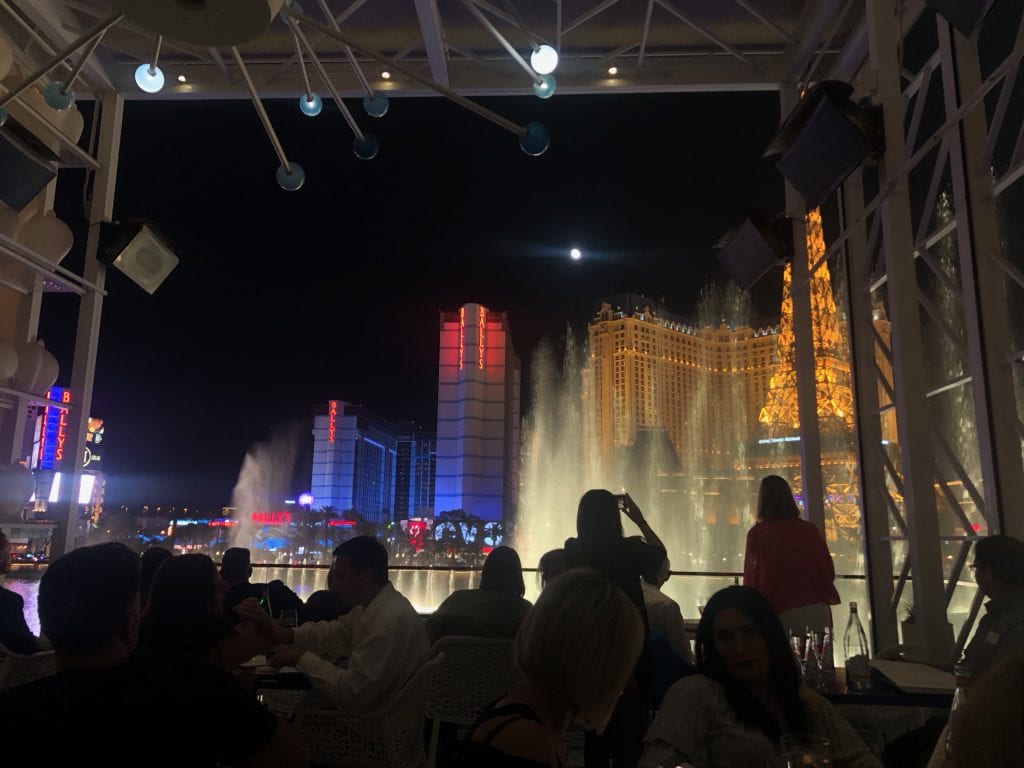 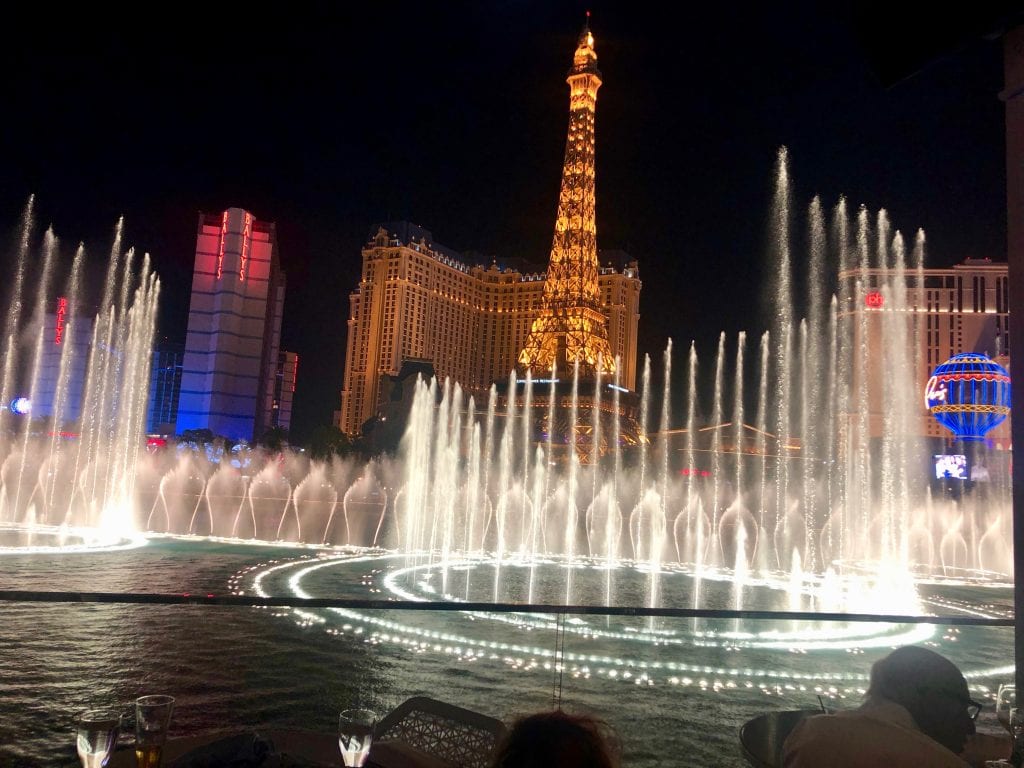 Another night we went to a show, I chose Absinthe at Caesars Palace – it’s the same La Soiree show that I love when it comes to London, naughty, but with the most incredible acts of strength and beauty, with a few inappropriate spectacles thrown in, all held in a big tent that makes the atmosphere much more interesting. I didn’t get to see the residency show, but Lady Gaga is soon to takeover as well as Aerosmith in December and April next year.

We spent some time downtown in Fremont Street, at the Freemont East Bars (Corduroy, a Downtown Las Vegas Bar was fun) which has a very different vibe “where they don’t charge you for breathing” as one of the locals told us.

We met some interesting locals on our travels up and down the Strip, exploring the very differently themed hotels. The Venetian Hotel is insane looking with Gondola’s floating up and down the inside of the hotel. It’s also got a blue sky ceiling that makes you feel you’re outside:- 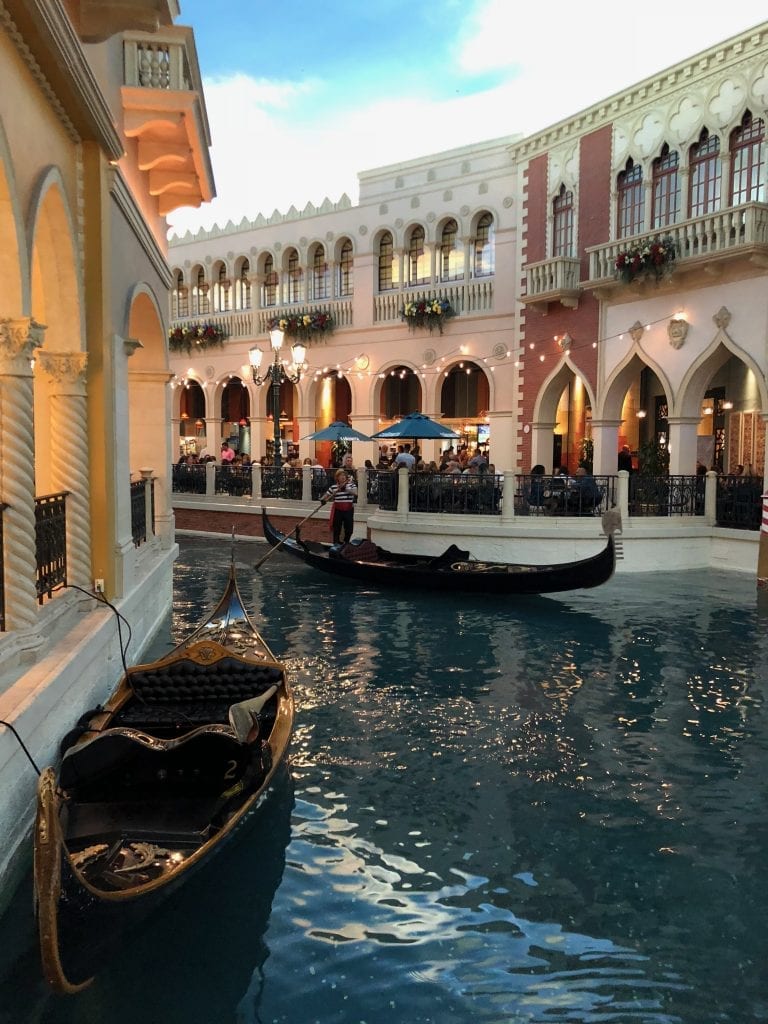 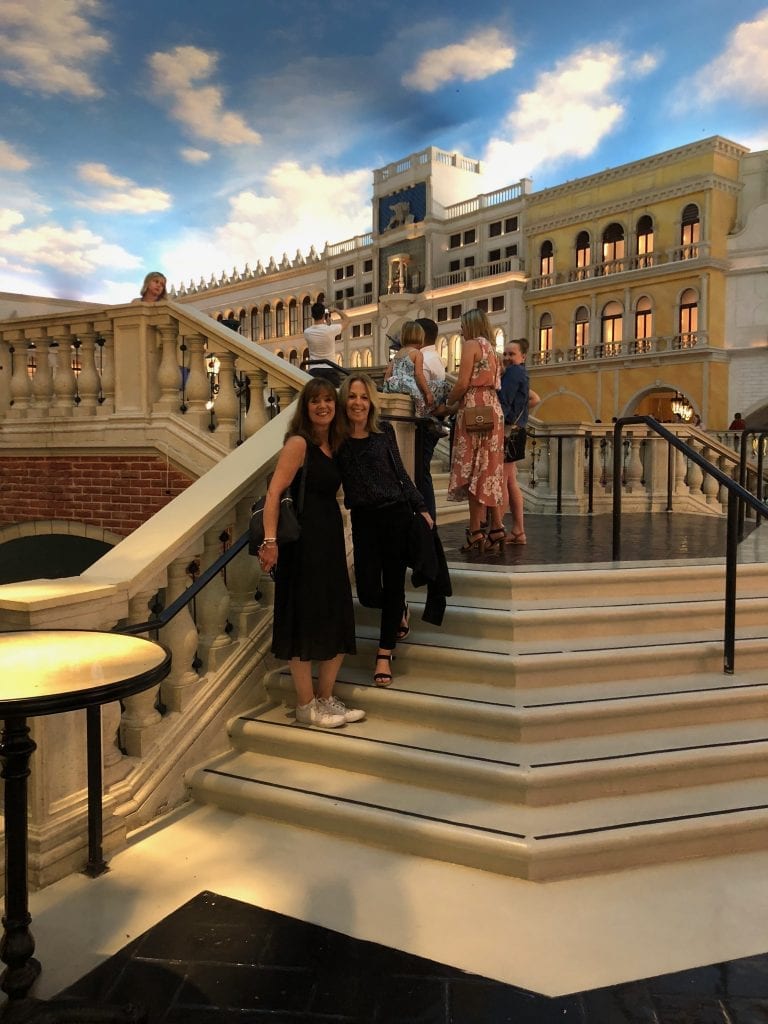 Naturally we bumped into Elvis:- 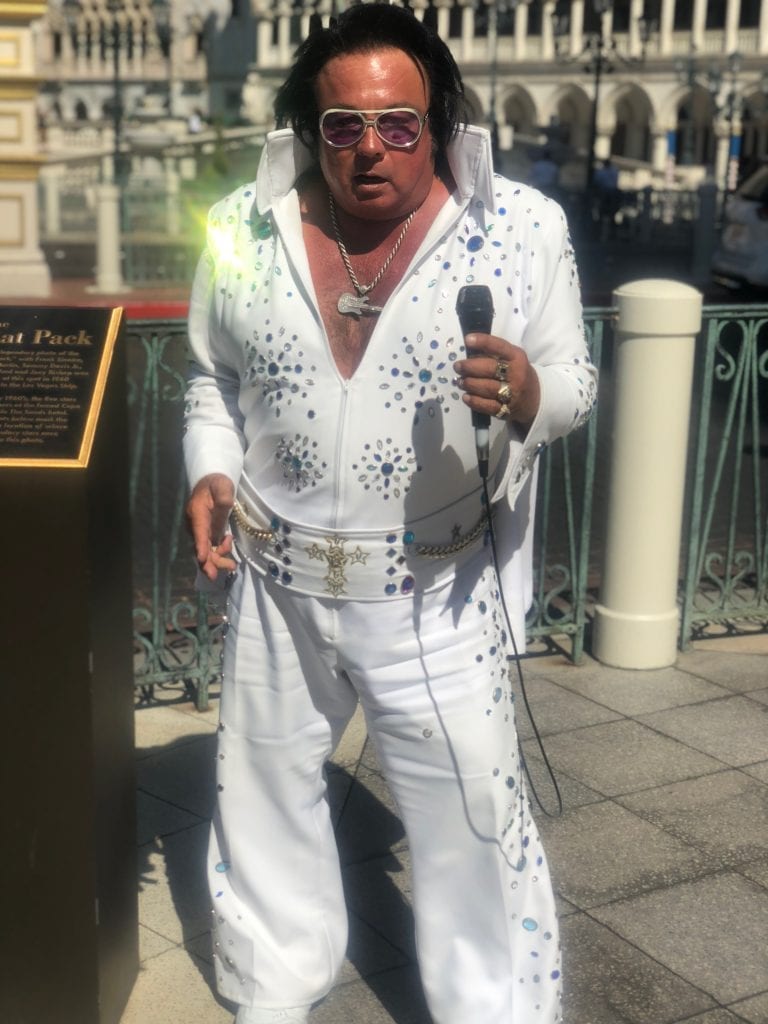 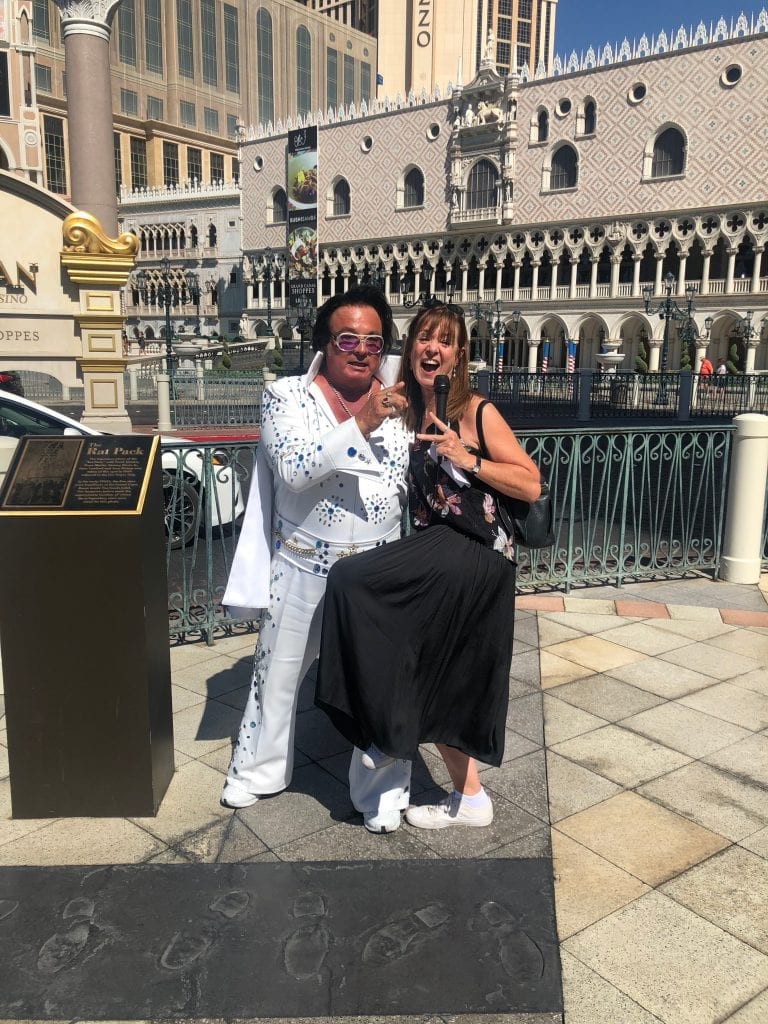 We went to the Black Tap and indulged in one of their famous milkshakes. Tami made it for us and whilst talking to her, she recommended all the adventure rides, especially the Stratosphere high jump and the zip line which you should do lying down for maximum effect:- 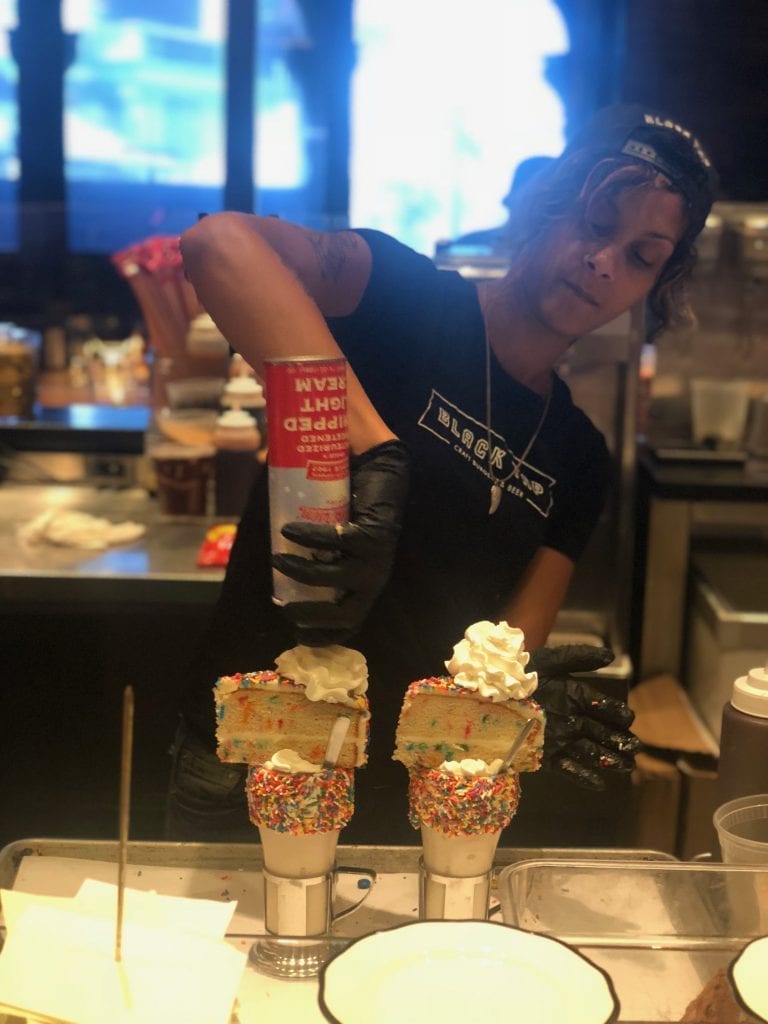 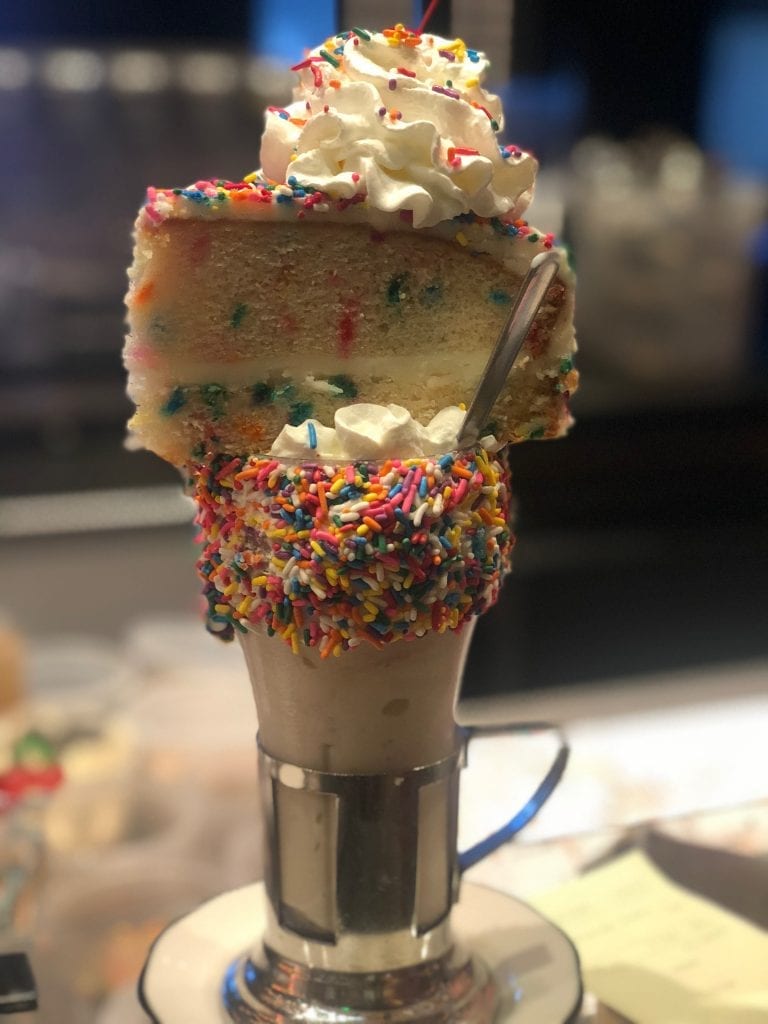 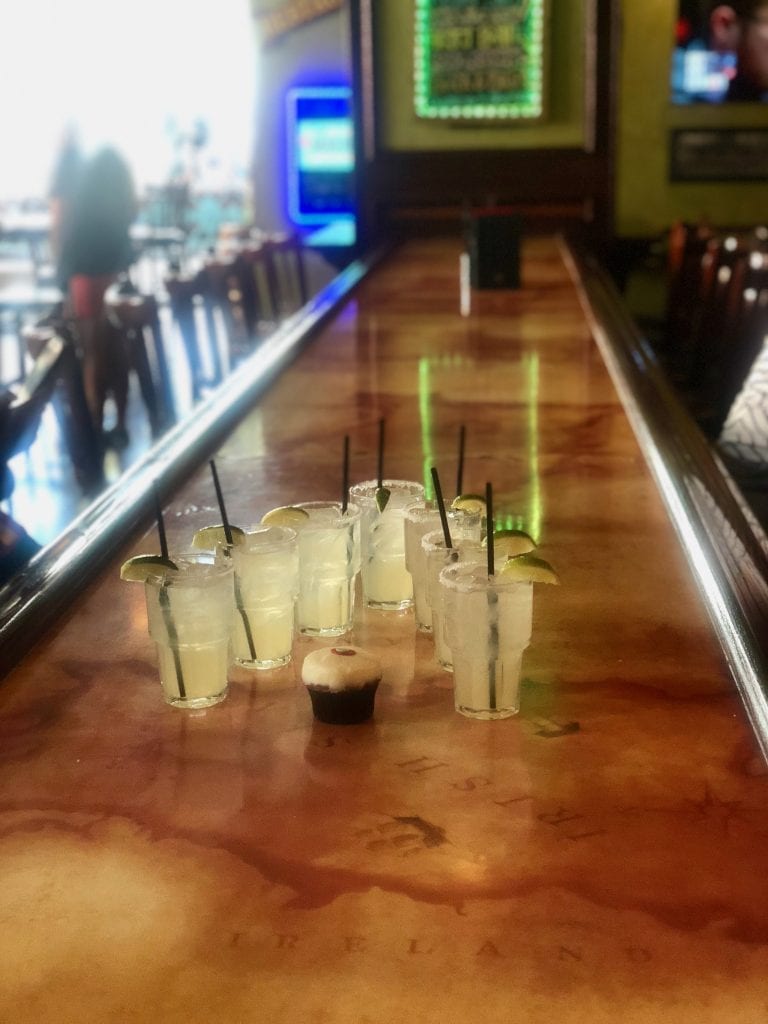 Steve, has lived all 37 years of his life in Vegas and still loves cupcakes. Here he is enjoying a velvet cupcake from the ATM machine at Sprinkles. He recommended that we head to The Stage Door which featured in the movie Casino. The Godfather element ensured that they pay very little rent so they can afford to sell you a $1 beer or a $2 vodka. 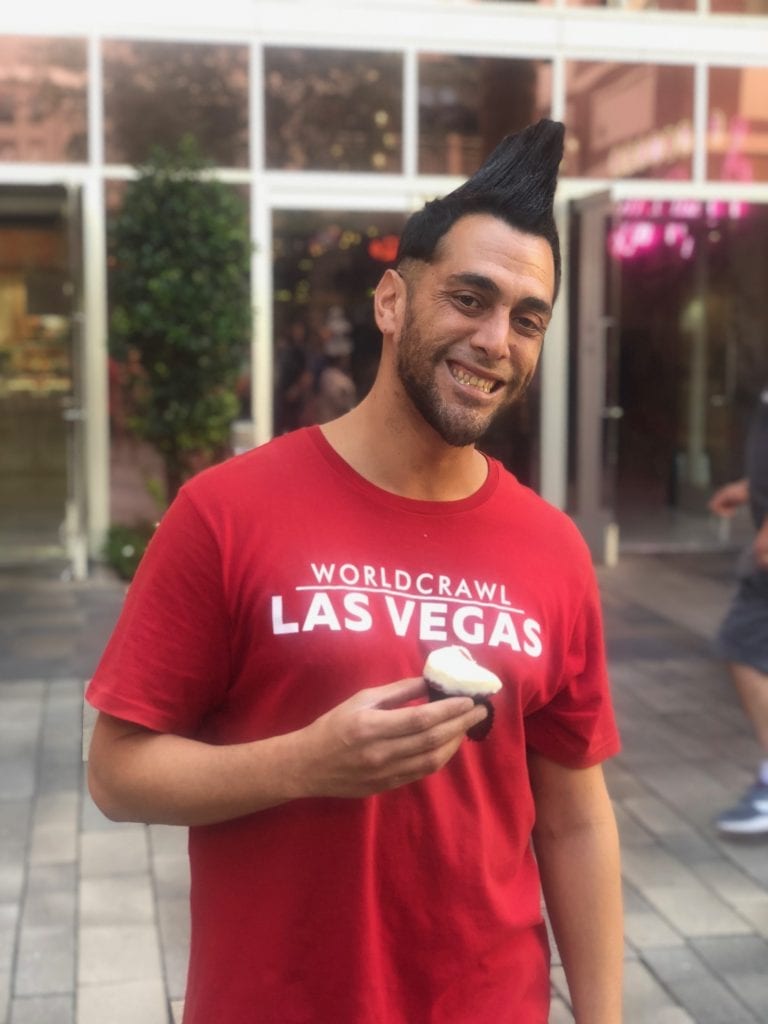 We also went to a spa – they’ve got many great ones in the hotels at the Wynn, The Cosmopolitan and the Venetian, but we drove out to the Red Rock Spa around half an hour away from the city to experience a change of pace and one of the best massages ever. We then went to Summerland for lunch where there are some lovely shops and less people. 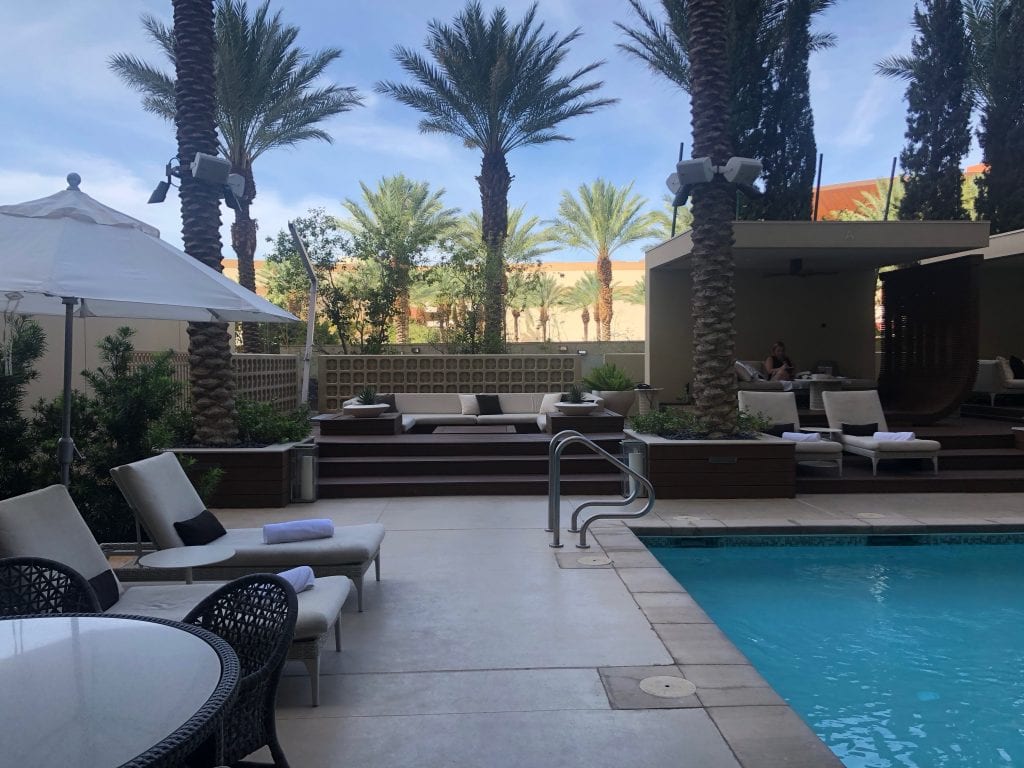 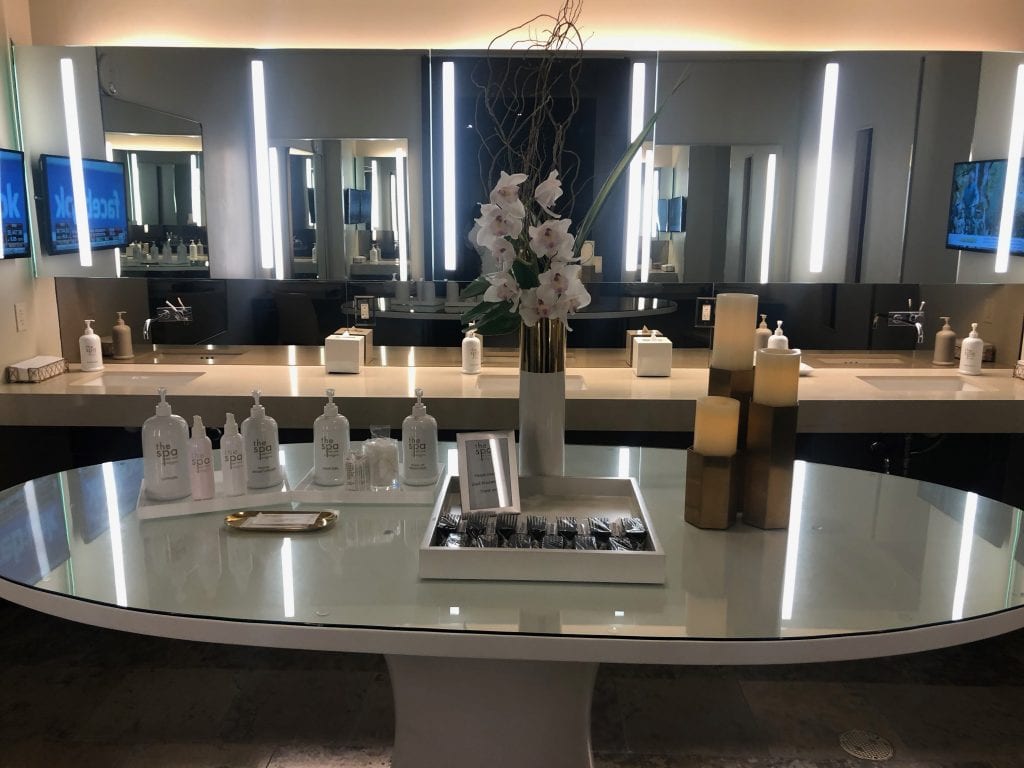