My brother and niece went along to review Air Play on my behalf – sounds like it was well worth the visit, but you’ll have to hurry – it’s only on until the 14th August. Air Play is the creation of Seth Bloom and Christina Gelsone, who met at a circus in Afghanistan, got engaged while street performing in Scotland and then tied the knot in China. For this show they have collaborated with air sculptor Daniel Wurtzel and director West Hyler, both known for their work on Broadway and with Cirque du Soleil. 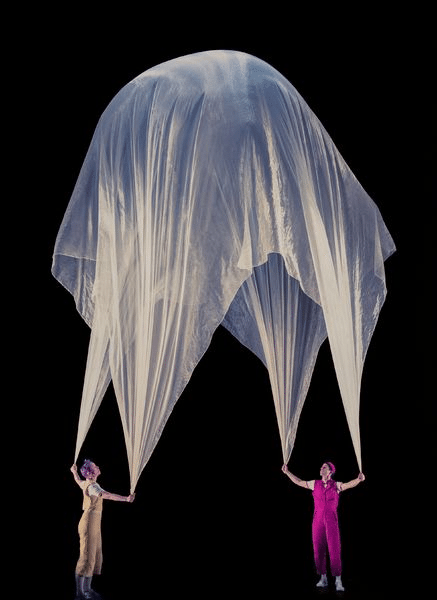 Here is his review:-

My five year old daughter and I were fortunate enough to be asked to represent Family Affairs at the press viewing of Air Play last night. Having done very little research neither of us had any preconceptions for the evening and I must say we were both as transfixed and entertained as the other and before you knew it the hour was over without realising it had even really begun.

Air Play is magical, mesmeric and astonishingly beautiful. Free-formed air sculptures are created with wafer thin fabrics before your very eyes like giant strands of spider silk coming right out into the audience. This is an old school 3D experience without the headache. The balloons and other airborne objects play just as important a role as our two characters who involved and entertained us every step of the way. At times you felt like you were watching Elefun the Musical does Crystal Maze does that scene in ET when everything’s floating around Elliot’s bedroom and my absolute favorite bit (which I won’t spoil) left me firmly thinking “I’ve so gotta try that when I get home”.

By the time we came out I felt like I’d had an hour’s regressive meditation and my daughter was bubbling over with excitement claiming that it had been the “bestest show she’d ever seen”. If I’d had a pound for every time she said “wow, Dad look at that”, I reckon I’d have easily been £35.00 better off.

A very enjoyable, sweet and often hilarious performance that forces you to be entertained like child again. Just brilliant, even for kids…

Air Play will run 9-14 August at the Royal Festival Hall as part of Southbank Centre’s Festival of Love.