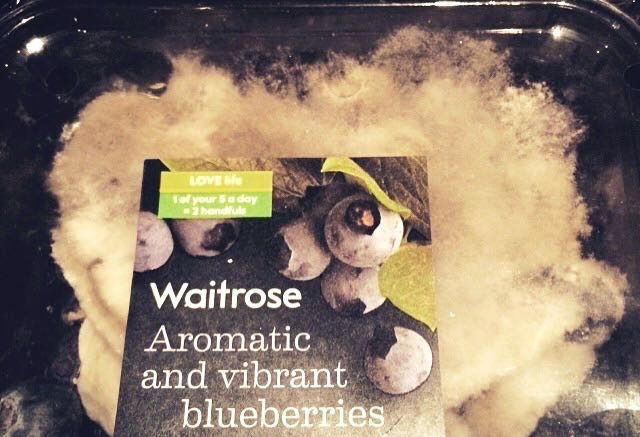 I would say that the state of these blueberries pretty much sums up the state of my life at the moment. My son found them in the fridge yesterday – “OMG they’ve turned into a cloud” he said as I chucked another expensive super-food that is supposed to make us feel vibrant and aromatic in the bin.

I have been completely (almost) on my own for the entire half term on account of the fact that my youngest appears to develop some sort of worrying twitch/extreme exhaustion if he spends too much time with me. Which means he has to go out every ten minutes to see his friends. Which is fine by me because even I find myself boring at the moment – I have been unable to do anything constructive, especially with regards to writing interesting blog posts about life and our recent trip to Madrid and George Ezra and general loveliness going on here there (but not everywhere). This is not entirely helped when talking to my 14 year old who is still slightly pissing me off on account of a fabulous trip to Madrid where I couldn’t even open the curtains without causing some sort of light pain, meanwhile my daughter and her boyfriend had the honeymoon suite next to me – because frankly, it has made me question what life is all about – so mouldy blueberries and clouds seem somehow fitting. I even considered paying him to talk to me yesterday, which is definitely a low point in my relationship with my children.

On my day off this week I booked a family dental appointment just like I used to, because I realised that I hadn’t looked in my childrens mouths since they had milk teeth – but in the end, I was the only person able to attend and I didn’t even need to go. We always used to do en masse family trips to the dentist and this time even my 14 year old asked if he could go on his own, another time as the particular time I’d booked interfered massively with his hanging out with his friends time. Go on his own???? Would you not agree that this is the sad indication that my children need me for nothing but money anymore. If you actually would prefer to go to the dentist without your mother….well then, it frankly says it all. I have become completely obsolete. Can’t even tutt with the dentist about fizzy drinks and hold their hand when they have a huge injection – for goodness sake, even I still need my mother when I go to the dentist.

However, all will change because tomorrow I am going away on business. Which as any parent knows is not the least bit stressful when you are leaving children behind to fend for themselves. Even more stressful when you don’t have a partner living in the same house who can deal with all. It means I spend nights tossing and turning and thinking about every possible eventuality – let me make it clear that I am moving in a perfectly capable friend to look after him in my absence and he is going to his father’s house for the weekend, but nevertheless I still have nightmares about him doing one or all of the following; burning the house down, killing the cats, not going to school, having a three day house party, not getting on with homework, being ill when I’m not there, being upset when I’m not there, dealing with a bus strike, not having enough money to get on the bus (oh forgot that’s all changed now), not having clean school uniform, not having done the homework, losing books, files, keys, phone, mind, OMG honestly the dramas in my head are literally ENDLESS and that is not even including my other two children who I also worry about every day even though they don’t currently live with me. I have even had “American Warewolf in London” nightmares AND BY THE WAY DON’T GO TO A MALL – ESPECIALLY NOT WESTFIELDS IN CASE OF TERRORIST ATTACKS MENTIONED IN THE PAPER TODAY WHICH I CAN’T DEAL WITH IF I’M NOT IN THE COUNTRY (although I clearly can’t spell it in my stress – WERWOLF? WEIRWOLF? WEARWOLF? WHEREWOLF?, WHAREWOLF? WTF…and all the while I suspect he really doesn’t give a shit that I’m going to be away – in fact he’s quite excited at the prospect! Gulp. *Changes locks on doors.

I am going to ARIZONA which I am very excited about – always wanted to go to Phoenix Arizona, but can’t quite remember why – all I can recall it is known for is a massive rehab centre and big cacti. So I must dash as packing now. Thank god remembered the crucial ingredient to sharing a room with a girlfriend. I literally ran to the chemist with a minute to spare before closing time last night, having driven like a lunatic to get there in time in a panic. “OMG WHAT IS THE PROBLEM??” asked the chemist, thinking one of my children was dying and needed emergency anti-biotics. “I need a packet of ear plugs” I told her. It’s really important. I am sharing a room with a friend and if she doesn’t have the waxy ones which disappear into your brain, it quite possibly will be the end of a beautiful friendship.

Such is the life of a single 50 year old. Long live the earplug and fingers crossed my son (and my other two children) survive without me.

OMG this made me laugh so much. And nod a lot, but mostly laugh. It’s the WORST thing about going away. On my last trip, my 16 year old was furious that I didn’t trust him enough to leave him on his own (he went to his Grandma’s) but all I could think of was massive house parties advertised on Facebook, and terrible goings on in bedrooms. So don’t worry, you’re not alone. xx

ha ha thanks – and good to know it’s not just me! Lx

Loving the blueberry cloud! I think they only call them super foods because of the super-fast way they go off. At the moment my fridge is stuffed with so-called healthy things and of course I am living on fish and chips. I prescribe huge mojitos in Arizona and hopefully the 14-yr-old will be thrilled to see you when you get back (though of course he will not admit this). Have fun XX

Thanks hun and SO pleased to hear from you – and also I couldn’t leave a message on your blog! Lx

It’s a nightmare isn’t it? Lx

Her On The Hill Reply

I am currently spending most of my life at the Manchester Dental Hospital, just a short 1 hour drive away (not), with all three girls (but not simultaneously – family bookings not an option as WAY TOO COMPLICATED!). All three have inherited the HUGELY INCONVENIENT gene of lacking some adult teeth behind the baby ones. Dramas all round.

Enjoy Arizona. 14 year old will be fine. He’ll be having fun at the dentist and will then be spending the rest of his time flossing. As long as he doesn’t floss so hard that he creates a spark which ignites the loo roll which sends the whole house up in flames. Don’t worry, it will be fine.

Ps: still have your birthday present to deliver!