GIVING BLOOD – JUST DO IT! 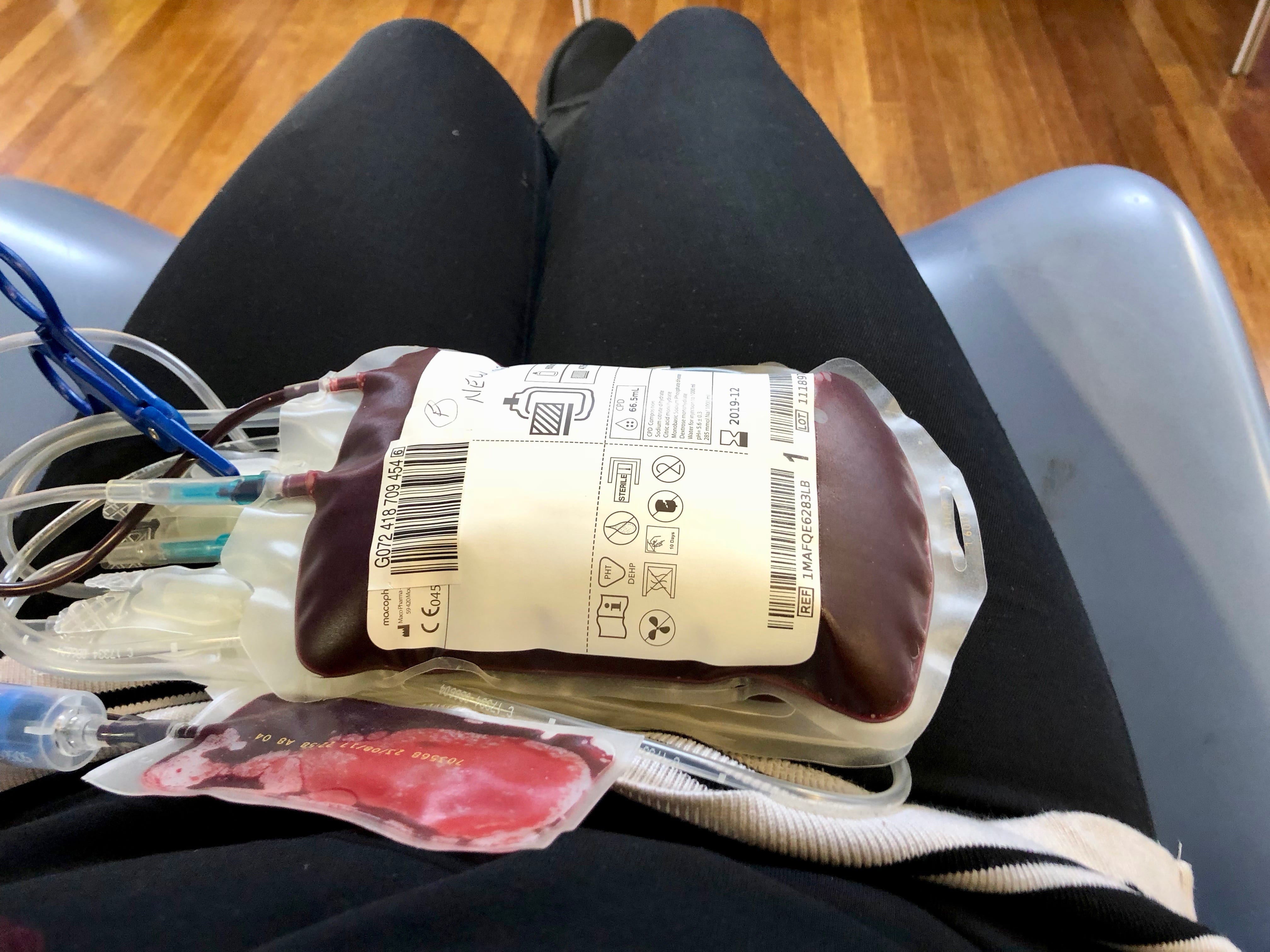 LOOK WHAT I MADE AT THE WEEKEND. An actual bag of blood. A unit as it’s known.  It was quite heavy sitting on my lap like that. Giving blood was very easy and those of us who can should all Just Do It! (Sorry…I hope you’re not squeamish!):- 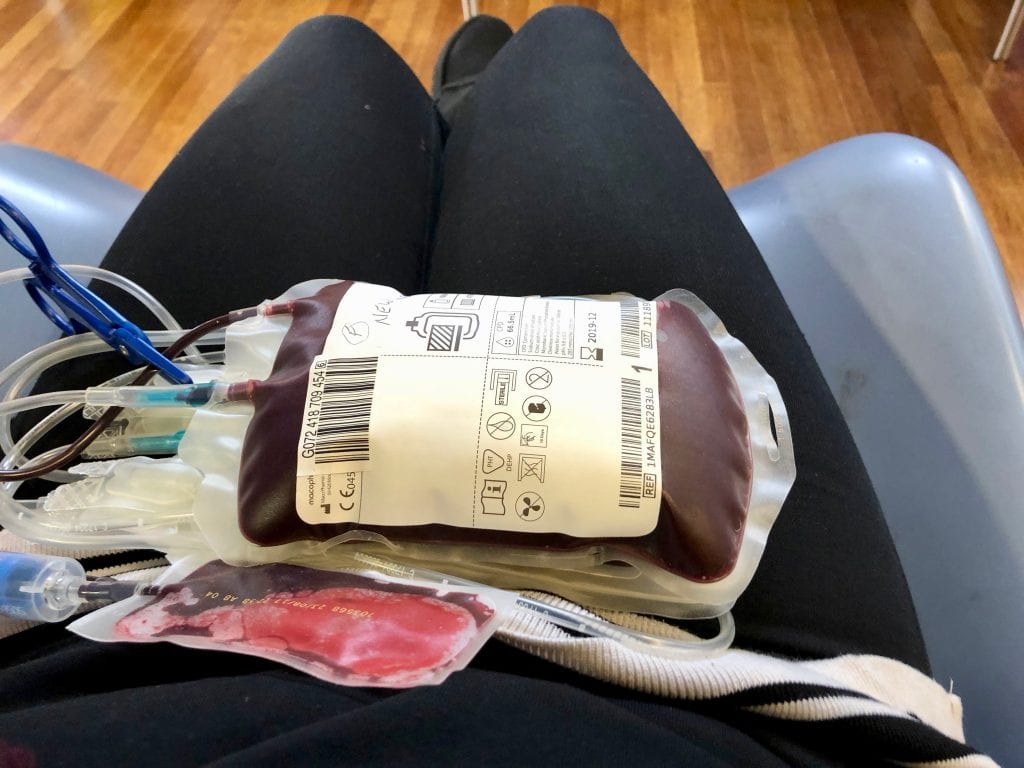 My unit of blood

There is always an urgent need for blood and blood components and of course it actually helps save lives, so I can’t believe I didn’t get onto this years ago. Most people can give blood, but only five out of every hundred people actually do so.

Only 5% of the population donate their blood.  Surely we can do better than that?  The demand for blood never stops.  The fact is that someone, somewhere needs blood every minute of every day, which is a scary thought.  They might need blood to survive a major accident or as part of the treatment of a serious disease or even help a woman get through a difficult childbirth.

You can give blood if you’re in good health between the ages of 17 and 66 and weigh at least 50kg.

On that basis, when I finally got round to giving blood, I had anticipated being able to book myself immediately in – but there was a three month waiting list if you didn’t want to risk just walking in. I also imagined that there wouldn’t be many people there on the day. How wrong I was. The hall was packed with people from all walks of life, patiently sitting waiting their turn. An incredibly uplifting sight to see and I was quite embarrassed to tell them it was my first time.  There were lots of nonchalant Millennials who clearly gave blood regularly – my daughter has already done it four times.  So impressive.

My excuse is that I have lived and travelled to various countries that stopped me from donating, as did having three babies, whereby I felt I needed all the blood I could muster, just to get through the parenting years. But nevertheless, it could have been about my 100th visit so there was no excuse other than time constraints and making the actual effort to do it.

It was a very straightforward process to get to this stage, which took about 15 minutes and they were very good at follow up texts once I’d made my booking, reminding me of the date, endlessly thanking me and offering me top tips on how to prepare:- 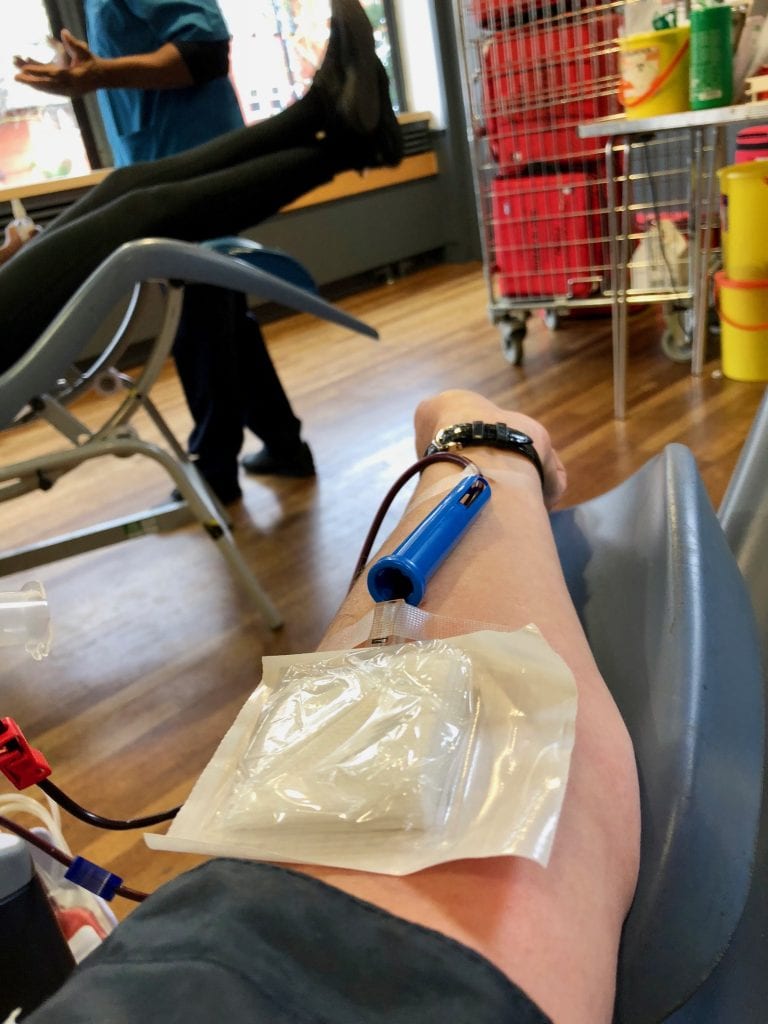 Ideally they want us to give blood three times a year if we can.  It’s strange to be walking around with a whole unit (just under a pint) of blood less than I usually have – so around 9 instead of 10, no more than 13% of my blood volume.  After donation, our bodies have an amazing capacity to replace all the cells and the fluids that have been lost.  I was a little worried about fainting or feeling dreadful afterwards – I’d even curtailed my alcohol content the evening before to ensure that I still had some blood left to give in my alcohol stream, but I had no ill-effects whatsoever and don’t expect to now.  I don’t think it’s long before the average person replenishes the lost blood – generally only 1 to 2 days, but it takes around 8 weeks to replenish all of the former elements (platelets etc) that were removed during donation and most people’s haemoglobin levels are back to normal after six to twelve weeks.

It’s a bit of a strange process when you get there. I saw five different people in the time I was there.  One called out my name, took me to a pop-up cubicle, checked my name and address and then said he had to leave.  He then gave my forms to someone else and asked me to sit back out in the waiting room.  Another nurse called me in to a different cubicle, went through the same process, asked a few more questions and then requested that someone else to take over, as she too had to leave.  The third nurse pricked my finger (you can barely feel it) and plopped a globule of blood into a test tube to check that the droplet of blood sinks to the bottom in under 15 seconds, which means you have enough haemoglobin in your blood to participate.

I  was then asked to sit outside again, this time in a different row of chairs.  Another woman came to collect me and lead me to the chair where they were going to take blood.  She put the pressure band on, pumped it up and then said she too had to leave.  WHERE WERE THEY ALL GOING?

Another nurse arrived to go through all my notes again and stick stickers on all the relevant bags and then she also announced she had to leave.  “Where are you all going?” I asked her. “We have a break every hour to have a wee and a quick cup of tea” she told me.  Which I totally get.  But my suggestion would be that instead of everyone having breaks across all the donors – why doesn’t each donor get allocated one person to take them through the process, which would take no longer than an hour and then they go off and have their break?  It’s not great for the patient to see so many people in such a short space of time, despite everybody there being lovely….

Just sayin’…and then you get lots of biscuits and drinks. 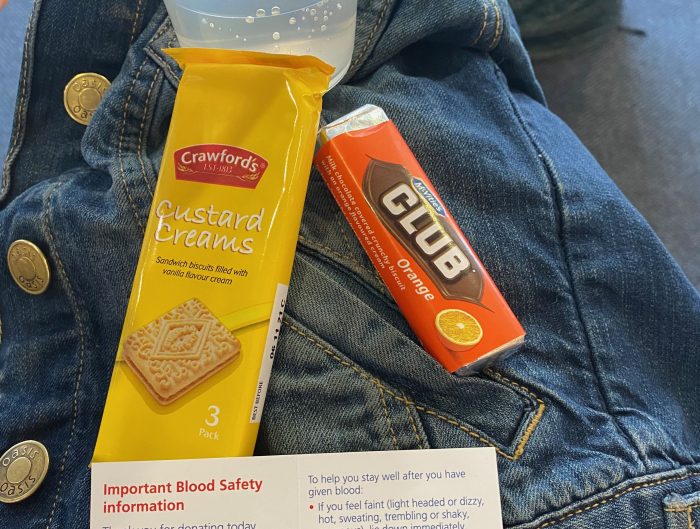 Good for you! It, of course, reminds me of the famous Tony Hancock sketch The Blood Donor. When he asked how much he had to give the doctor said ” a pint.” Hancock replied, “A pint? That’s very nearly an armful!” Classic comedy from 1961.

Ha ha – thanks for that – I remember that sketch!! Lx