GOOD LUCK WITH YOUR MOCKS!

“Children in a family are like flowers in a bouquet: there’s always one determined to face in an opposite direction from the way the arranger desires.”
Marcelene Cox

Not sure who Marcelene Cox is, but I finally totally understand what she means.

Good luck to everyone starting their mock GCSE’s today. My youngest son has mocks starting today and his revision process and general attitude to exams could not have been more different to my other two children. As a result it appears to be me who is taking on the worry and not sleeping. I even had a nightmare last night about getting caught out trying to take his exams for him. Which, by the way wouldn’t help him at all. I have no idea how maths works – I have managed to get through life without achieving maths O’Level – back in the day a CSE was good enough (was that what it was called? Can’t even remember) and I haven’t really missed having that skill. But these days it is essential. Maths and English have to be passed no matter what.

Trying to help him stuff bits of knowledge into his head is almost impossible. We haven’t really worked out the best exam technique…tried pretty much everything so far. The one that seems to work best is to come up with rude mnemonics for remembering key words. I am now really paranoid that when naming parts of a cell he’s going to forget and use the rude words instead of the correct terms! I am assuming that for him, the purpose of these mocks will be a wake up call and once he starts seeing the magnitude of the job and the rapidly reducing time scale then things might start falling into place. She says, hopefully…

It is strange how different children can be – with the same parenting skills involved each time, although perhaps by the third child they do indeed become a little more relaxed. Even now, most attempts to call my daughter at university have her whispering into the phone because she’s at the library. Again. No way that’s going to happen with my youngest. But oh well, they are all different and make their own paths so although I will continue to cajole and support, he has to want to do it for himself.

This weekend has been spent trying to get him to sit down – my firstborn is back in the ranch now that he’s left university and is another adult to help support. He is busy looking for jobs and doing internships. He’s got one at the moment which he’s getting paid for – great for him and not quite as demoralising as lots of his friends who are doing endless internships that you don’t get paid for. This seems to be especially prevalent in the Fashion industry – one girl I know must be on her sixth placement…and still no job offer. I do understand that this would still get you ahead of the game, but again there is the issue of having to be privileged enough to be able to live in London rent free and that reduces the number of people who can take those places. I also understand what a lot of commitment it is for company’s to take you on for a few weeks – even when not getting paid there is a big time commitment so it’s difficult to know what’s best. I do think apprenticeships should be taken on by more larger companies, supported by the government so that more opportunity can be given to those who don’t live in London.

ANYWAY, having my big son back in da house is great on many levels. Although we now have to share a bathroom and fridge. Both of which is quite traumatic. He spends his whole time complaining that the fridge is empty. Which it is. So he’s right. BUT THAT’S BECAUSE HE EATS EVERYTHING.

Look what else he did. After a big night out on Friday night he got back, cleaned his teeth and wiped his mouth on my new silk top that I had hung out to dry on the towel rail. 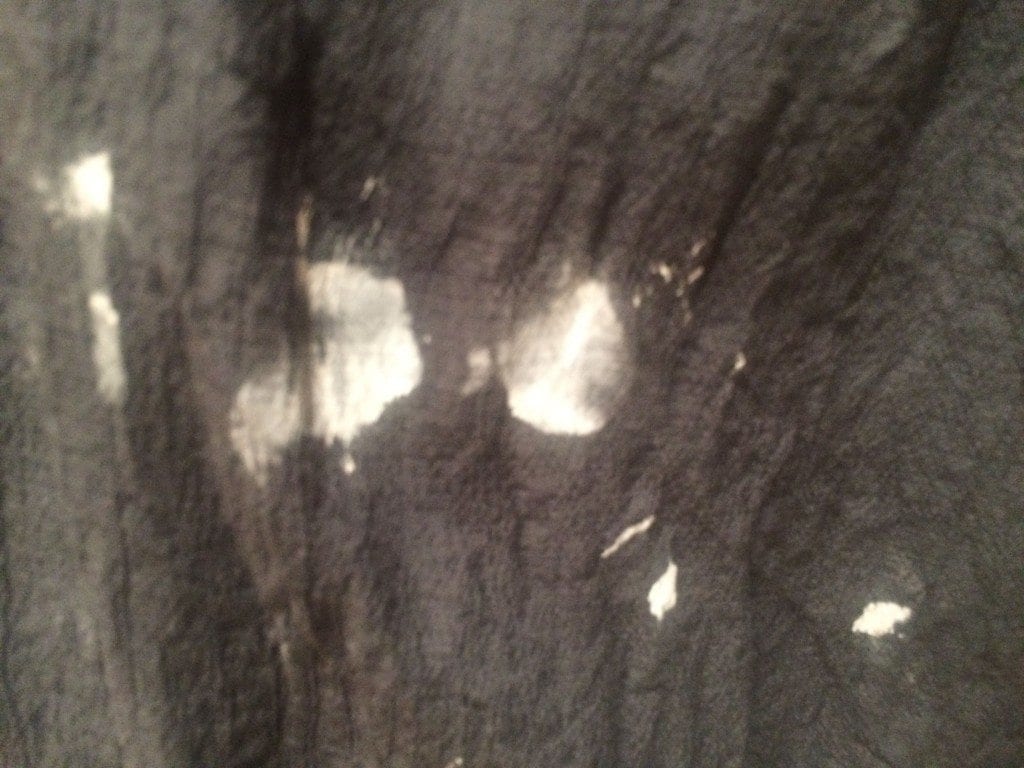