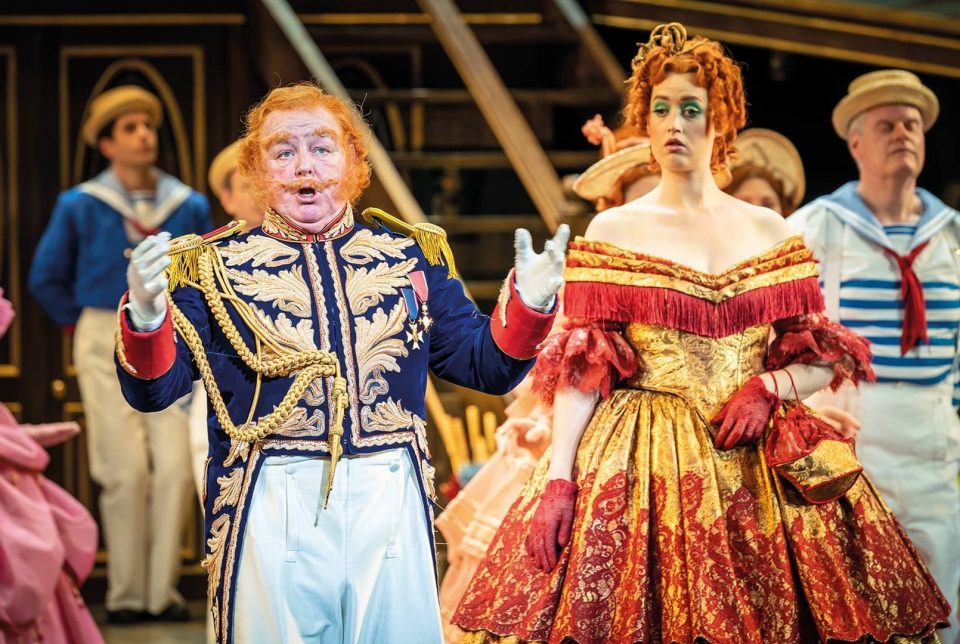 HMS Pinafore or The Lass That Loved A Sailor, by W. S. Gilbert & Sir Arthur Sullivan, Currently showing at the London Coliseum.
Review by John O’Brien

This comic opera has been reinvented by the director Cal McCrystal with one aim in mind:- FUN. It’s so entertaining I want to see it again and again. He plays it for laughs and uses every trick in the book to entertain the audience. On the evidence of the performance I saw, the performers clearly love being in the show. The director, cast, crew and creatives have put together an absolute gem. Exciting, entertaining, exhilarating.

Cal McCrystal gets Gilbert and Sullivan (G&S). Their breakthrough comic opera HMS Pinafore is about the English gift for laughing at ourselves. Just think about the title. A “pinafore” is a ladies apron with a bib. What country names a ship after an item of ladies clothing? So Cal McCrystal’s playful and irreverent vision for Pinafore is spot on. His updates and inventions are in the true spirit of G&S. He plays with Morecambe & Wise, Dick Emery, Benny Hill, Boris Johnson, pantomime, Wimpy Bars, Toblerone’s, slapstick, outrageous puns – “will you take me up the poop deck,” levelling up – visual gags and ridiculously hilarious dance routines. The delights come thick and fast, there is never a dull moment.

The set is wonderful (at a cost of £50,000).  A replica of HMS Victory complete with cannon, captain’s cabin and deck. The revolving set gives the show its Benny Hill moment. But McCrystal can do high brow as well as low. He alludes to Coleridge’s Rime of the Ancient Mariner as Dick Deadeye (Henry Waddinton) shoots for his lunch. The sailors look fetching in their blue and white striped shirts alongside the ladies in their hooped frocks.

The patter songs – an early form of rap – are a real highlight. None more so than Sir Joseph Porter’s (Les Denis) “When I Was A Lad”. The comic effect of each line is made even funnier as the chorus repeats the phrase tongue in cheek,  as it were. Sir Joseph’s all-singing-all-dancing entourage consisting of “his sisters and his cousins and his aunts” led by the superb Bethan Langford as Hebe is not to be missed. 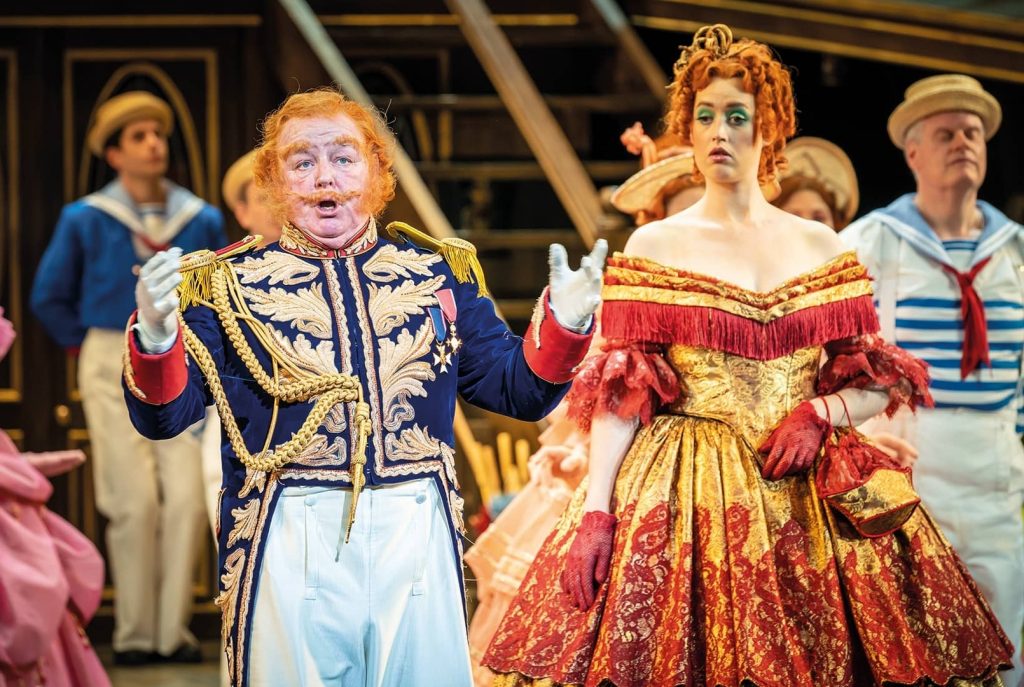 John Savournin is outstanding as Captain Corcoran. His comic gifts are apparent in everything he does. From a raised eyebrow to a desperate appeal to the sound engineer to turn the sea down. His asides to the audience are priceless. Hilary Summers as Little Buttercup is terrific, as a Portsmouth bumboat woman, (Don’t ask). Tom Tucker, the midshipmite (Johnny Jackson) tap dances, sings and delights in equal measure. Watch out for his anagrams of HMS Pinafore.

Nobody puts a foot wrong, (well hardly ever), in this utterly winning production of HMS Pinafore. It’s all about laughing at ourselves and not taking ourselves too seriously. It’s one of England’s most important contributions to human happiness. It’s in this light that we can all feel at ease in singing along to “The Englishman”:-

But in spite of all temptations,
To belong to other nations,
He remains an Englishman!

In short, don’t miss it, it’s a great night out and it’s on until December 11th!