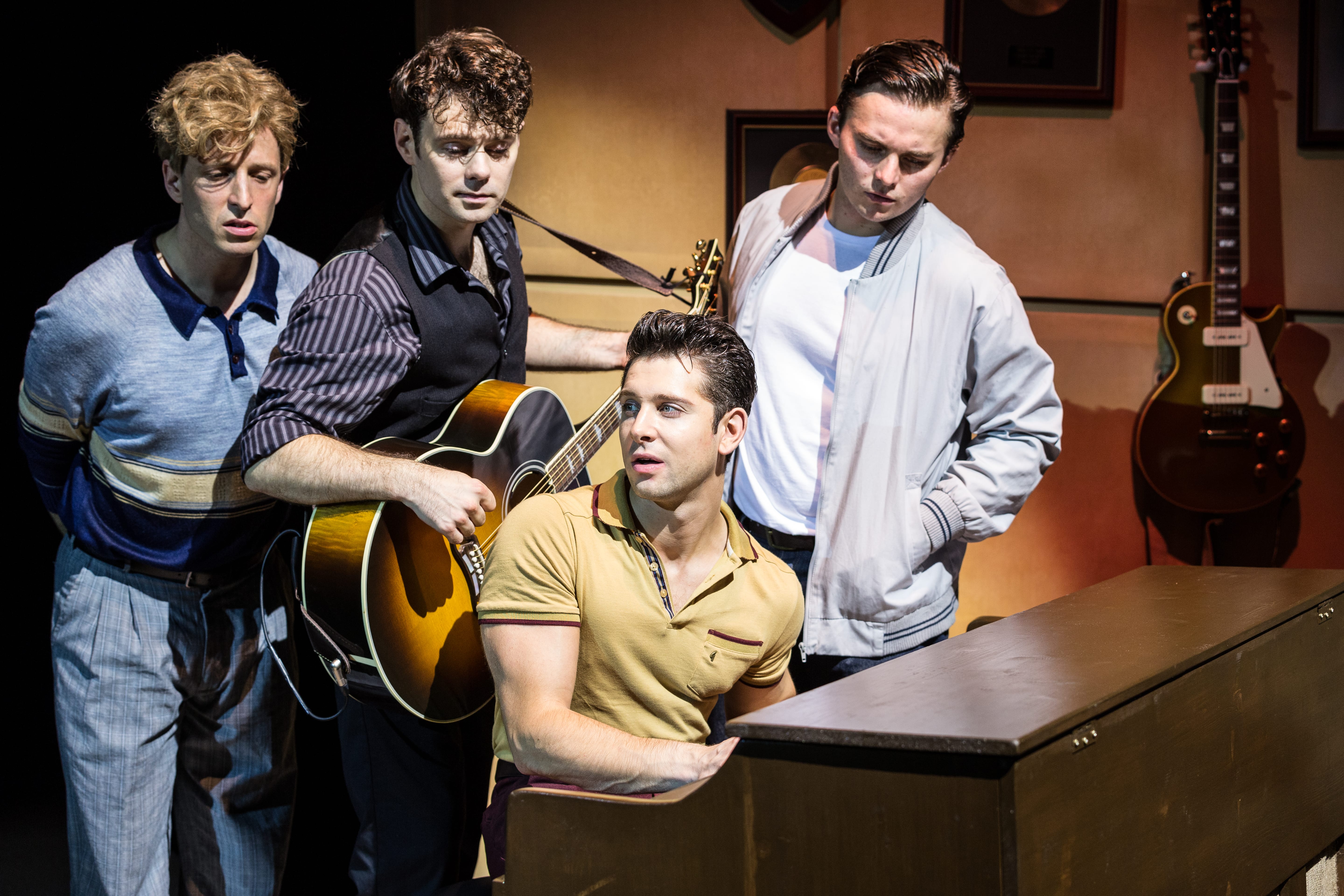 Million Dollar Quartet is a wonderfully uplifting and life enhancing musical which is on all this week at the Richmond Theatre. I can’t recommend it highly enough. It is superb. Based on one night in Memphis when Elvis Presley, Johnny Cash, Jerry Lee Lewis & Carl Perkins gathered together at Sun Records, run by Sam Phillips for a famous jam session on the 4th December 1956. Million Dollar Quartet recreates that historic night in a show which not only features some of the greatest hits of all time, Blue Suede Shoes, Walk the Line, Great Balls of Fire, Hound Dog, but also dramatizes the reality and many layered ironies in all their lives. All the action takes place in one set at the studio at Sun Records, brilliantly recreated by the talented set designer David Farley. He also designed the costumes. Johnny Cash with his rolled up jeans and zip up jacket is especially well done. The show is held together by Sam Phillips (Jason Donovan) the man credited with creating Rock ’n’ Roll. From his studio in Memphis he hit on the idea of blending gospel, country & Western with black rhythm and blues to create a musical genre that would sweep the world. His crucial insight was that young people would buy these records despite what the church, or Congress or the established record companies thought. He was right. Jason Donovan brilliantly brings Sam Phillips to life with all his energy, fatherly care for his “boys” and tragic awareness that they will all leave him for more $ when RCA Columbia records come calling. He has great self-awareness in the face of these multiple disappointment’s but never succumbs to bitterness or rancour. Indeed he maintains a wonderful equanimity in the face of it all. Commenting wryly that he invested some of the $35,000 RCA gave him for buying out Elvis on shares in the Holiday Inn. The story of Elvis has been told a thousand times but what Ross William Wild brings out so well here is the sense of gratitude Elvis felt for Sam for giving him his chance. Just in passing, Elvis mentions his stillborn twin Jessie, a very moving moment. Elvis wants Sam to help him keep off the predators now controlling him but Sam knows that he has lost Elvis and there is nothing he can do. It is like a father losing a son. Carl Perkins (Mathew Wycliffe) who I had never heard of emerges as one of the strongest personalities in the studio. He is aggressive and self-confident frequently clashing with Jerry Lee Lewis. As the show unfolds we get to know why this is so. Dancing with his girlfriend one night an irate fellow dancer said “Don’t step on my blue suede shoes.“ Carl Perkins, like all great artists immediately turned experience into art and recorded Blue Suede Shoes the next day. Tragically driving up to New York to appear on the TV, Carl crashed his car and his brother Jay broke his neck. In the interim, Sam let Elvis cover Blue Suede Shoes and Carl Perkins never fully recovered. So it’s a tragic story full of drama.

Robbie Durham does a wonderful job of bringing Johnny Cash to life. I already mentioned the rolled up jeans. Robbie has him down to a T. The walk, the accent, the holding the guitar high Spanish style, it’s all perfect. There is a wonderful scene between Johnny & Carl smoking outside the studio. Johnny confides to Carl that he has signed for Columbia but hasn’t told Sam yet. They start justifying why they are leaving and Johnny says “well the distribution dept. at Sun is so bad that if they want to prevent the spread of Communism they should give the job to Sun records.” The warmth and humour is also very clear from Robbie’s rendition. Talking about selling records, Carl complains that drunks don’t buy records to which Johnny replies “No they only write them.“ This is a superb recreation of Johnny Cash and worth the ticket price just to see Robbie.

In a very strong field, the performance of the night must be Ashley Carruthers as Jerry Lee Lewis. He is unbelievable. One of the world’s foremost pianists Ashley is spellbinding. His catch phrase “I’m Jerry Lee Lewis From Faraday Louisiana” as he shakes hands with everyone he meets is infectious and he is very funny and very self aware. He explains to the others that they are all going to hell as Rock n Roll is all about “fornication.” He says this whilst thrusting his pelvis forward provocatively. He explains that he gave up his course training to be a preacher because there were too many pretty girls out there. His self confidence is unstoppable and when he plays Great Balls of Fire to end Million Dollar Quartet you know that you have been in the presence of talent of the highest quality.

Million Dollar Quartet is a show full of wonderful music, compelling performances from a very strong cast but above all tells a timeless story of both the triumph and tragedy of Rock ‘n’ Roll and the ultimate moment was when they posed for a photograph, a flash went off, it all went black and then a life sized photograph of the real contenders appeared. Incredibly moving moment and a must see production.

I’m off to see it again.

Sounds great! Will try to get tickets!