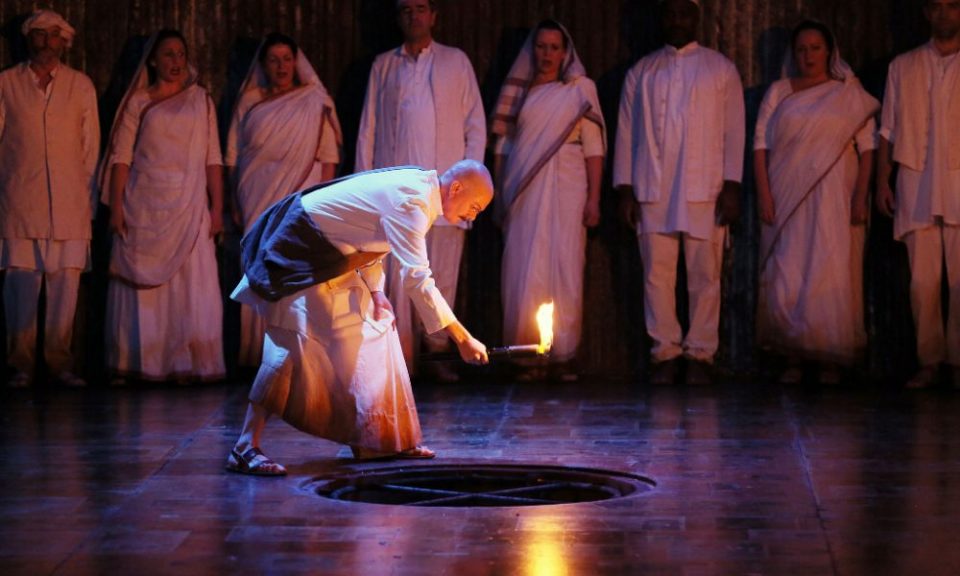 Satyagraha, an opera in three acts by Philip Glass, is an enthralling , exhilarating and energising experience and is a powerful start to ENO’s new season. It’s on all this week at the London Coliseum in St Martin’s Lane. Each act of the opera explores Mahatma Ghandi’s (superbly realised by Sean Panikkar) life from young solicitor to campaigner for Indian independence. The opera focuses on his idea of Satyagraga – “truth force.” Similar to the notion of speaking truth to power but with a total commitment even if it means death. It’s profoundly moving and utterly compelling.

The opera is based on the Bhagavada Gita and is sung in Sanskrit. I loved it. I was surprised how much of the singing I was able to follow just by the tone and phrasing. In fact I found it more intriguing not knowing the language. I just enjoyed the singing as singing. The music is slow and mesmerising. It repeats but is never repetitive. It meanders like a smoothly flowing river. It washed over me repeatedly and I felt calm and experienced feelings of serenity and spiritual ecstasy. I found that this slow and measured rhythm allowed me time to really ponder and reflect on the experience I was having. Quite magical. Each act is self contained and works on its own as it were. 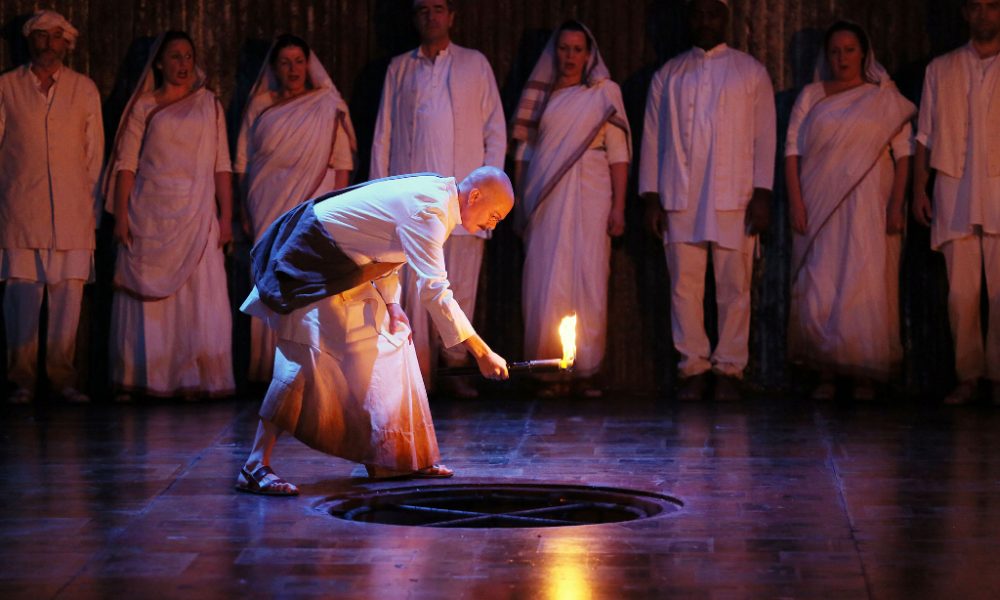 Act one features Leo Tolstoy, who was an inspirational figure for Gandhi. In particular his book “The Kingdom of God Is Within You “ made a big impact on Gandhi’s non-violence based on universal love. Tolstoy wrote letters to Gandhi offering support and encouragement. This is shown in the opera as Tolstoy sits high up at his desk writing and looking down as Gandhi struggles with the racist regime of South Africa. In homage, Gandhi names his experimental community “Tolstoy Farm.”

Act two is inspired by the poet Rabindranath Tagore whose Gitanjali of 1910 expressed a universal love of humankind, god and nature. Tagore looks down from on high for the whole of Act two.

The third and final act is devoted to Martin Luther King, the American civil rights campaigner who represents the future of Satyagraha. He stands high up centre stage with his back to us delivering his “I Have A Dream speech” – surely the greatest political speech of all time. So we see the development of a remarkable tradition of non-violent action from Tolstoy, via Gandhi and Tagore and onto King. This recent tradition is placed in a timeless realm of struggle by the prologue which recapitulates a battle from the Bhagavada Gita in which Arjuna and Krishna prevent war between rival factions. So we have an ancient text within which to place our modern context. 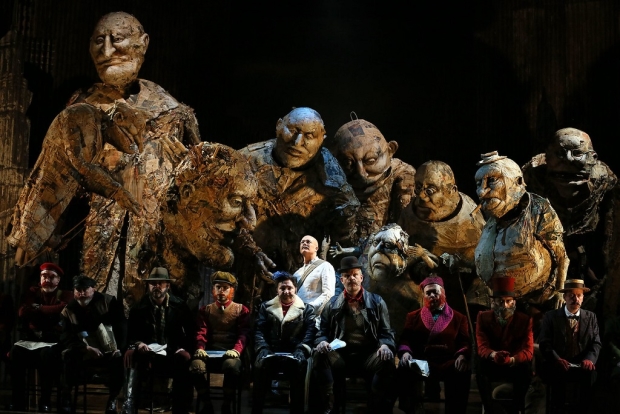 This opera is visually stunning. The backdrop is a huge curved wall representing tyranny and oppression. It’s made of rust coloured corrugated iron. Gandhi is contained between the wall and the stage footlights, he’s hemmed in, confined. Gradually chinks appear in the wall. High up on the left a window shows Tolstoy at his desk writing letters to Gandhi. On the right a corresponding window shows Tagore reading. Finally a window dead centre shows King speaking, as the wall disappears and a blue sky fills the entire backdrop.

The opera features an astonishing troupe of papier-mâché figures. These are large grotesque puppets operated by performers on stilts. The effect is at once terrifying and fascinating. A word about humour. Glass is highly sensitive to the nuances of power in face to face relationships. Here he shows how the use of sneering laughter can be a weapon of exclusion and marginalisation. He does it by the use of two syllables:  “Ha Ha”. Sung repeatedly with varying tones of contempt and derision it forcefully demonstrates how Gandhi was victimised by White South Africans.

I’ve tried to show why this opera is worth seeing. I believe it widens one’s experience of the world and enriches opera as an art form. 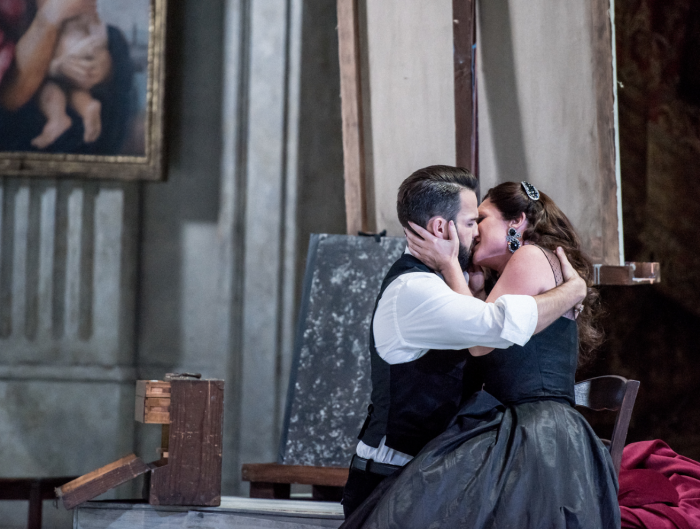