THE DOUBLE DEALER REVIEW AT THE ORANGE TREE THEATRE 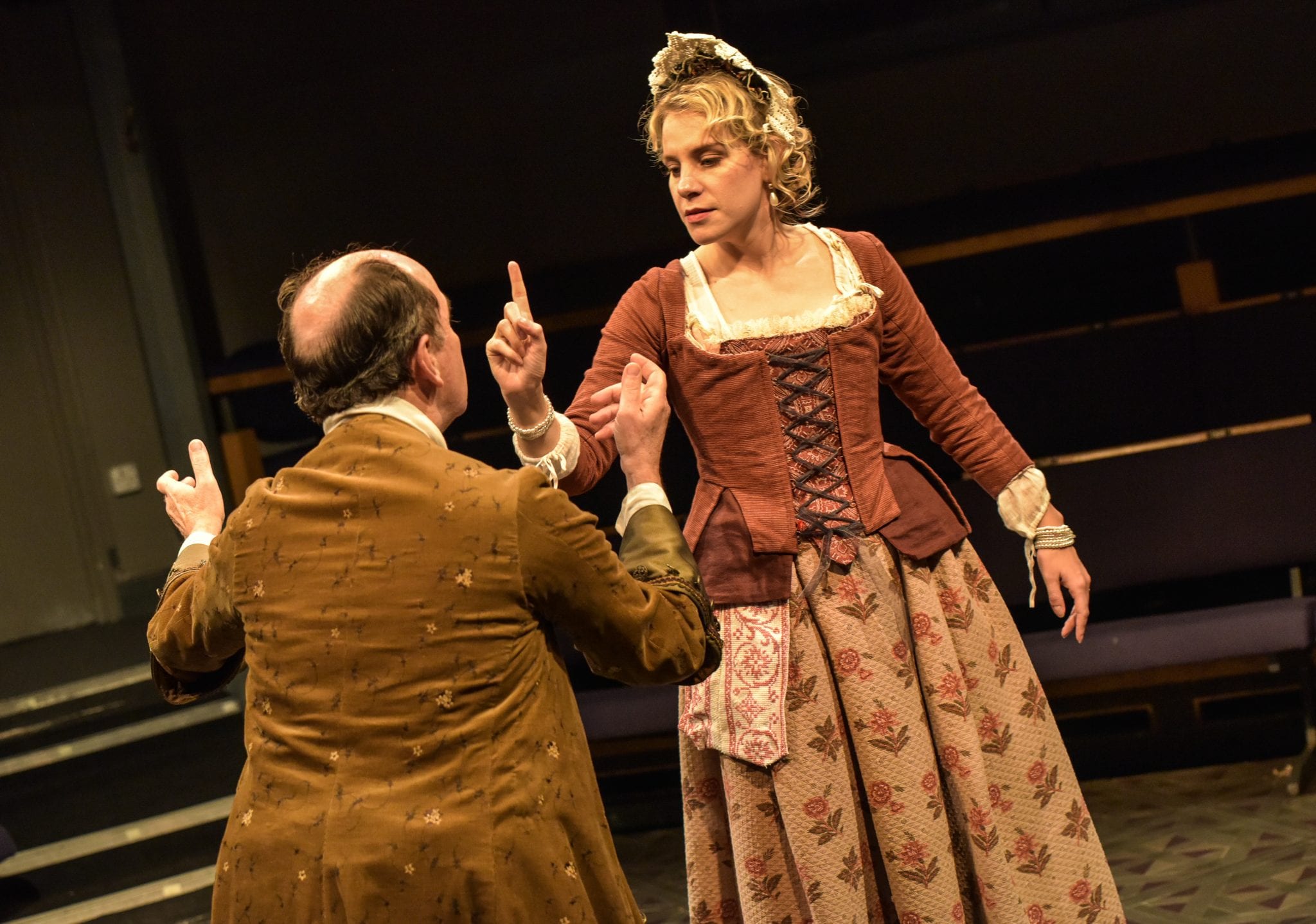 “The Double Dealer” is currently running at The Orange Tree Theatre in Richmond and has been reviewed below by John O’Brien:-

“The Double Dealer” is a triple serving of comedy, morality and intrigue. First performed in 1694 (with music by Henry Purcell no less) that’s three hundred and twenty four years ago. It has not been staged since 1978, forty years ago at the National Theatre. It’s a classic from the great age of Restoration drama (1660-1700) when the Aristocracy let rip after the closure of the theatres by the Puritans from 1649- 1660. The writer William Congreve (1670- 1729) is most famous for penning the phrase which summed up the era: The Way of the World which is in fact the title of his most famous play written in 1700.

The Restoration is defined by the comedy of manners, satire, fops in wigs and stack heel shoes, women with black beauty spots, fans and bodices, witty dialogue and sexual transgressions. It was also the first time that women played women on stage. Congreve wrote parts specifically for his two favourite actresses, Mrs Anne Bracegirdle and Henrietta Godolphin, 2nd Duchess of Marlborough. In fact he left his fortune to the latter on his death. The setting for the play is Lord Touchwood’s residence, Orange Tree House, Richmond which gives the present production at the Orange Tree Theatre, Richmond an added sense of historical and artistic continuity. The director Selina Cadell is a specialist in Restoration drama having previously directed both “Love for Love” and “The Way of the World.” So she is the leading expert on the staging of Restoration comedy working today. The twelve strong cast for this outstanding production is very impressive. They capture the manners and affectations of the age whilst the dialogue is spoken with a clarity which allows every nuance of every syllable to be savoured. 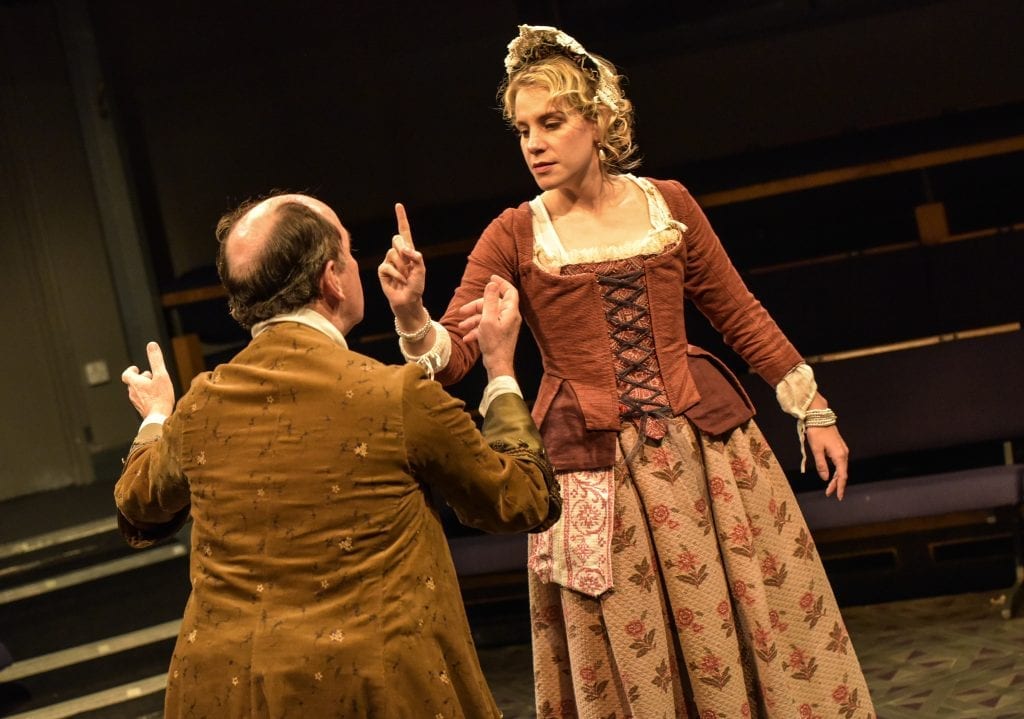 Typically for a Restoration play the plot of “The Double Dealer” is highly intricate such that it probably needs two viewings to get it straight in one’s mind. Essentially it’s a romance fraud in which the Machiavellian villain, Maskwell (Edward MacLiam, wonderful) masterminds a plan to deceive Lord Touchwood (Jonathan Coy) into disinheriting his nephew Mellefont (Lloyd Everitt) and leave his wealth to him instead. He aims to kill two birds with one stone by using Lady Touchwood (Zoe Waites) to bag his real target Cynthia (also played by Zoe Waites). This is a complicated plot which takes the best part of two hours and twenty minutes to untangle, but it’s worth the effort. My only reservation is that having Zoe Waites play both Cynthia and Lady Touchwood does make the play unnecessarily confusing. Surely better to add a fourth actress to that cast and have Lady Touchwood and Cynthia played by distinct actresses?

So much for the intrigue. The comedy is delightful and is generated chiefly by the triangle of Sir Paul Plyant (Simon Chandler, excellent) his wife Lady Plyant (Jenny Rainsford, sensational) and Mr Careless (Dharmesh Patel, superb). Sir Paul is tormented by his much younger and very pretty wife Lady Plyant. She keeps him swaddled in bed and denies him sex. She reads all his correspondence and gives him an allowance depending on his compliance to her regime. Hence the pun on name Plyant. The scene in which Lady Plyant learns of Mr Careless’ desire for her is worth the ticket price alone. Jenny Rainsford gives a tour de force of comic passive aggressive acting which brings the house down. She is sensational. The sight of her riding on the hapless Careless’ back and slapping his bum will stay long in the memory. There are some wonderful comic vignettes from Paul Reid as Lord Froth the snuff addict who refuses to laugh on principle. And his wife Lady Froth (Hannah Stockely, terrific) who peppers her dialogue with Frenchified expressions that she doesn’t fully understand.

Finally the morality. Although we see the deception and double dealing of Maskwell, Lady Touichwood, Lady Plyant and to lesser extent Lady Froth (Hannah Stokely) and Brisk (Jonathan Broadbent) ultimately love and truth will out as Lord Touchwood declares in the final discovery scene. This is a quality production of a play about the manners and morals of what used to be called “The Quality.” Like the characters depicted on the lid of a jar of Quality Street Chocolate’s. To transport oneself back to Richmond in 1694 and immerse oneself in the some of the finest dialogue ever written is surely a worthwhile as well as an enjoyable way to while away a couple of hours. This was the way of the world in 1694 and much of it still resonates with us today. A rare treat indeed. The next production may be another forty years in the future so grab this one while you can. 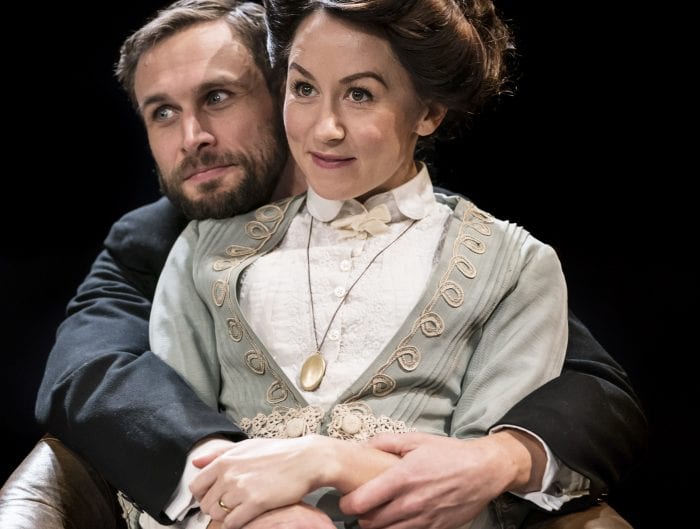 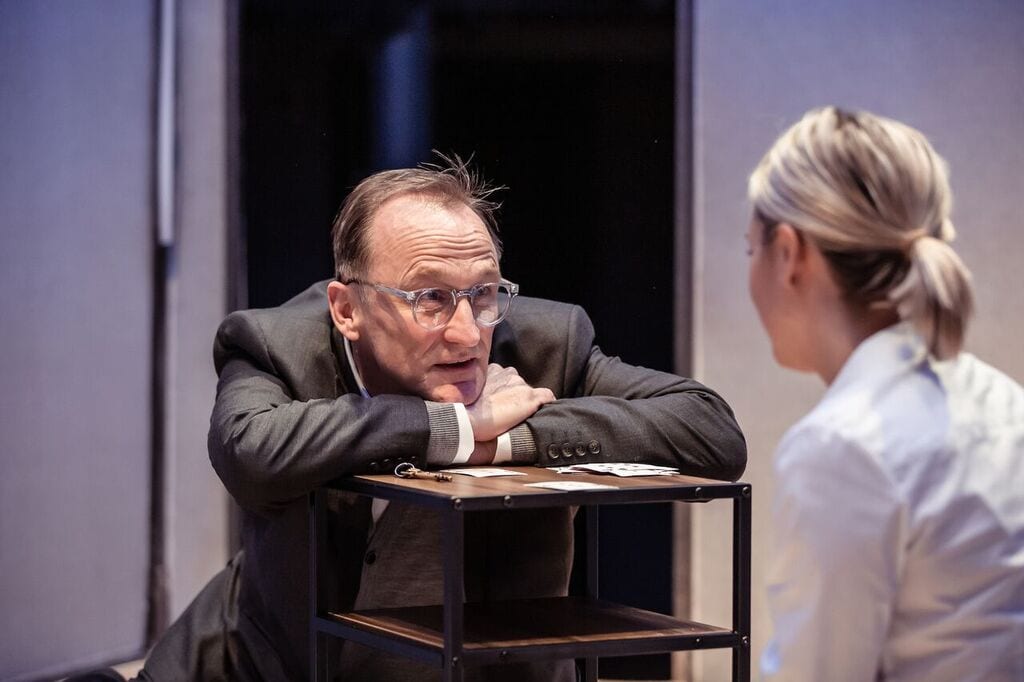