THE GIRL ON THE TRAIN REVIEW 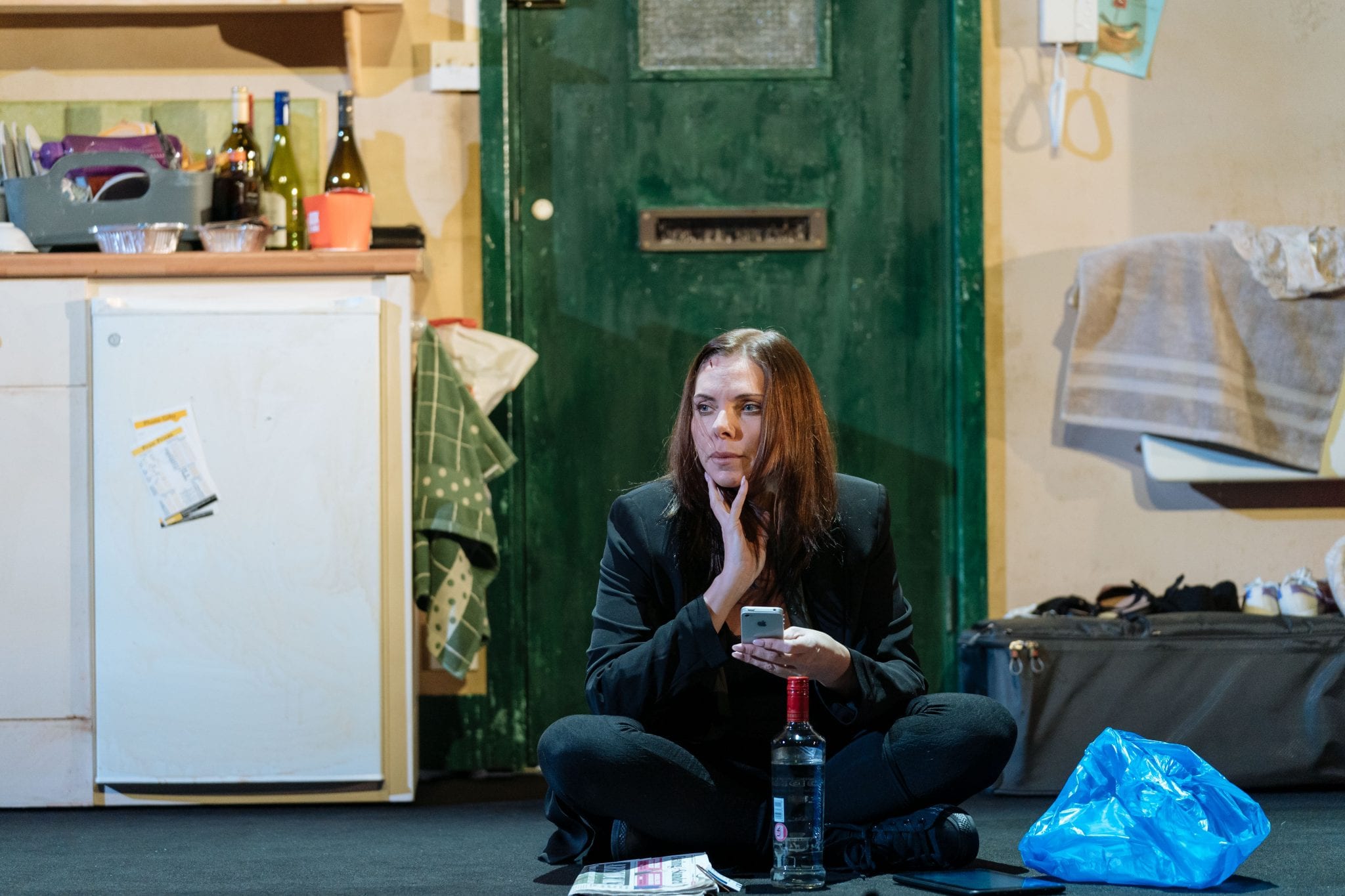 “The Girl on the Train” (2015) is currently showing at Richmond Theatre and has been required reading for millions of train commuters – over 20 million copies sold – and a very successful film starring Emily Blunt was released in 2016. Its latest incarnation as a play has been adapted for the stage by Rachel Wagstaff and Duncan Abel. Starring Samantha Womack (Ronnie Mitchell, East Enders) it tours nationwide until July. Catch it if you can this week at the Richmond Theatre. It is quite simply the murder thriller at its best.

The premise for “The Girl on the Train” – watching other people’s lives as the train passes by the back of their houses and gardens – is clearly derived from Alfred Hitchcock’s masterpiece “Rear Window” (1954). In which Jimmy Stewart stuck at home with a broken leg looks out at the apartment block opposite his window and discovers dark secrets. Michael Powell’s Peeping Tom (1960) is another precursor for “The Girl on the Train.” The difference is that in “The Girl on the Train,” the lead role in the whodunit is taken by a woman and this is crucial because it gives agency and initiative to the play’s fascinating central character, Rachel Watson (Samantha Womack, superb). 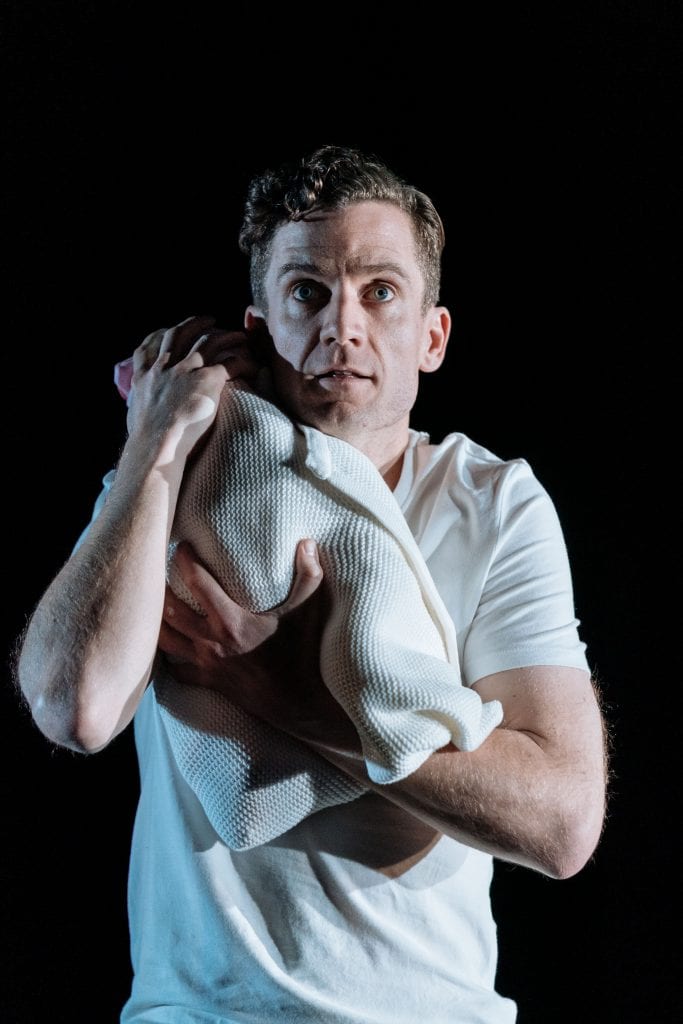 Recently divorced, Rachel has turned to the bottle for solace. When drunk she gets angry and has blackouts and can’t remember what exactly she did the night before. This morning she has woken up with a cut on her forehead and vague memories of an argument with her ex-husband Tom (Adam Jackson-Smith) and his new wife the smug Anna (Lowenna Melrose). Tom informs her that the police want to talk to her because his neighbour Megan Hipwell (Kirsty Oswald) has gone missing. In fact Megan is one of the people Rachel has got “to know” from looking at her house from the train. The plot develops from there and I don’t want to give too much away. 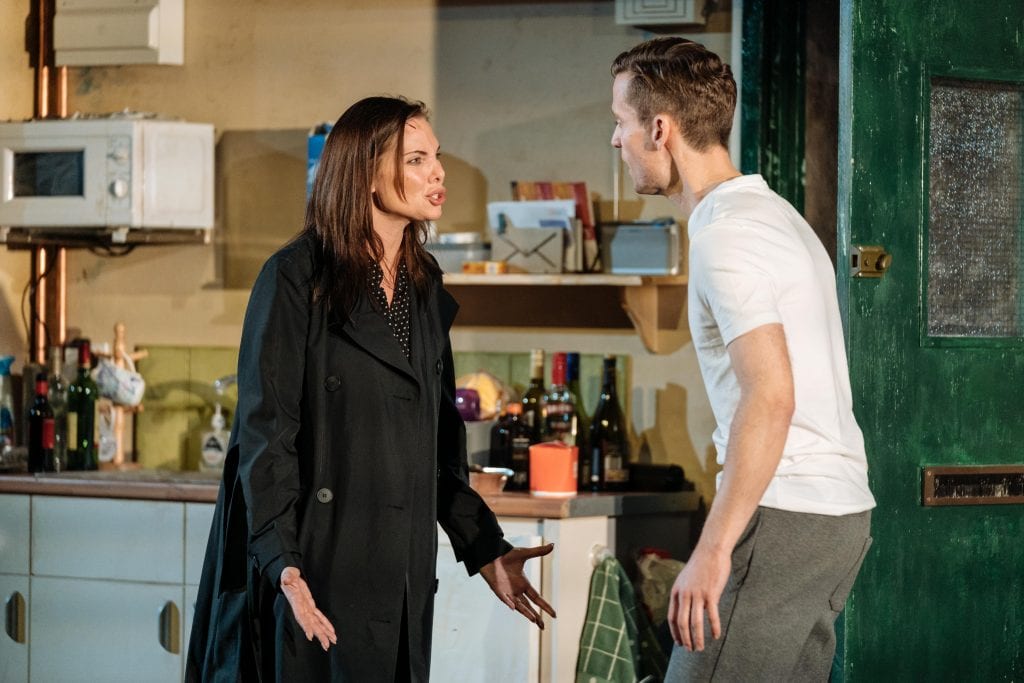 The direction from Anthony Banks is fast paced. The momentum he builds is gripping and scene follows scene in quick succession. “The Girl on the Train” lasts two hours, but the time flies by, so engrossing is the evening’s entertainment. 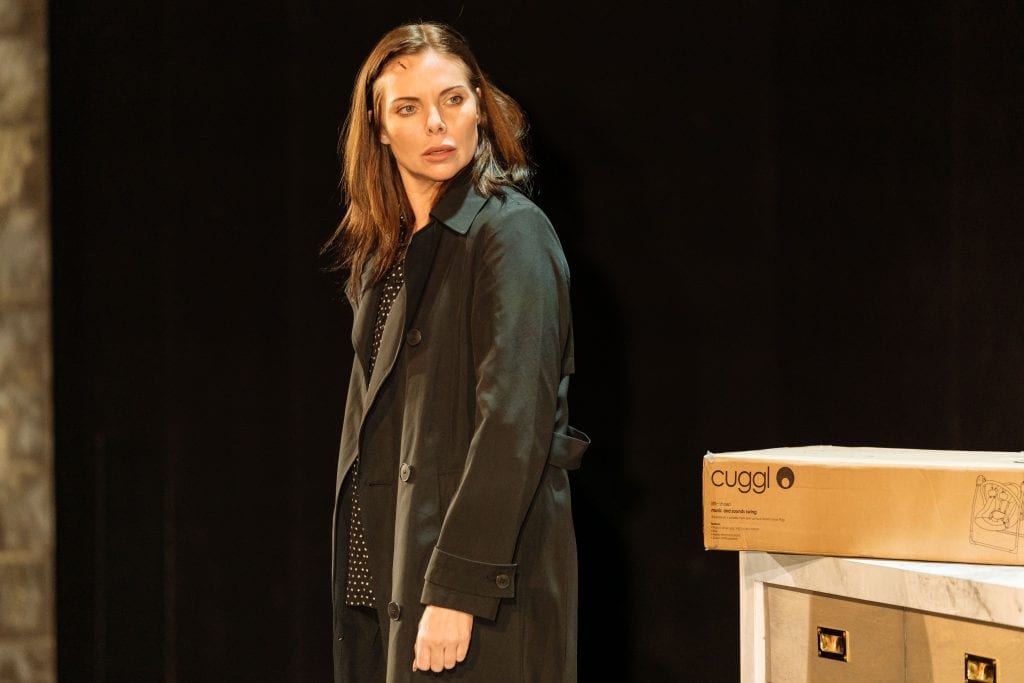 The sets by James Cotterill are well done. In particular the outline of a train with a fast moving backdrop of suburbia as the train whizzes past is highly effective. Also cleverly thought out was the device of having the therapist (Naeem Hayat) and patient face the audience during their sessions so that we see them from the front and not side on. The set uses black to create a chilling atmosphere of fear and uncertainty. Eerie, sharp, jagged and unsettling sound effects add another layer of menace and suspense. The device of introducing characters which only one character can see and speak with whilst others are unaware also works to build tension. 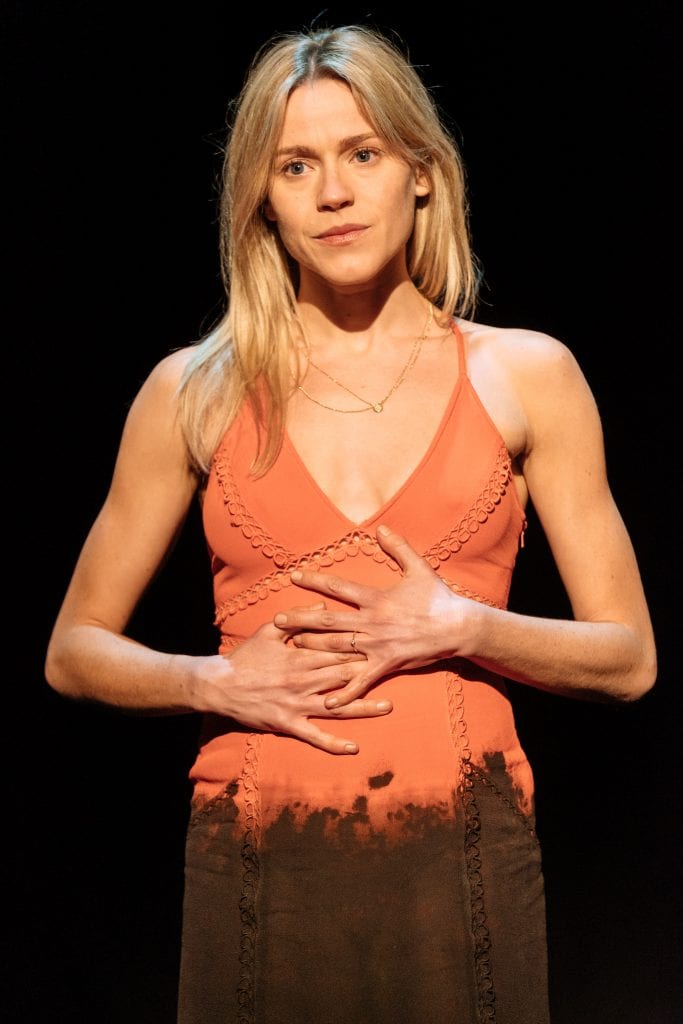 The evening belongs overwhelmingly to Samantha Womack. She gives a tour de force performance of a woman on the edge of a nervous breakdown. She convinces as both a neurotic, battling her demons (drink and anger) and a jealous lover, all the while dealing with a pest of a detective D.I. Gaskill (John Dougall), a manipulative ex-husband and his annoyingly smug new partner. 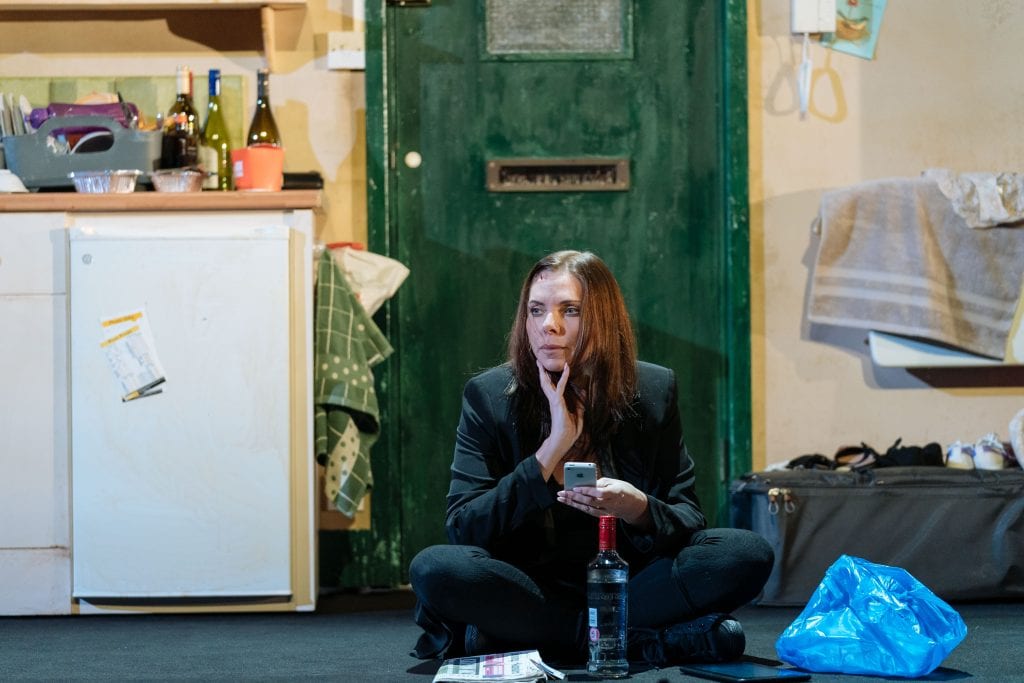 Somehow she manages to stop herself falling apart. She does so mainly through her formidable resilience and quick wit. When Gaskill threatens to arrest her she retorts “no I’ll arrest you!” She has some fine comic touches. As when she wipes her nose on a tissue, carefully folds it up and then matter of factly hands it to her ex, Tom, to dispose of. She is unafraid of telling the police how to do their job. Being interviewed, she tells them not to write down something she has said and then tells them to write down something which shows her in a better light. These and many other winning qualities shine through in Samantha Womack’s powerful portrayal of Rachel Watson. 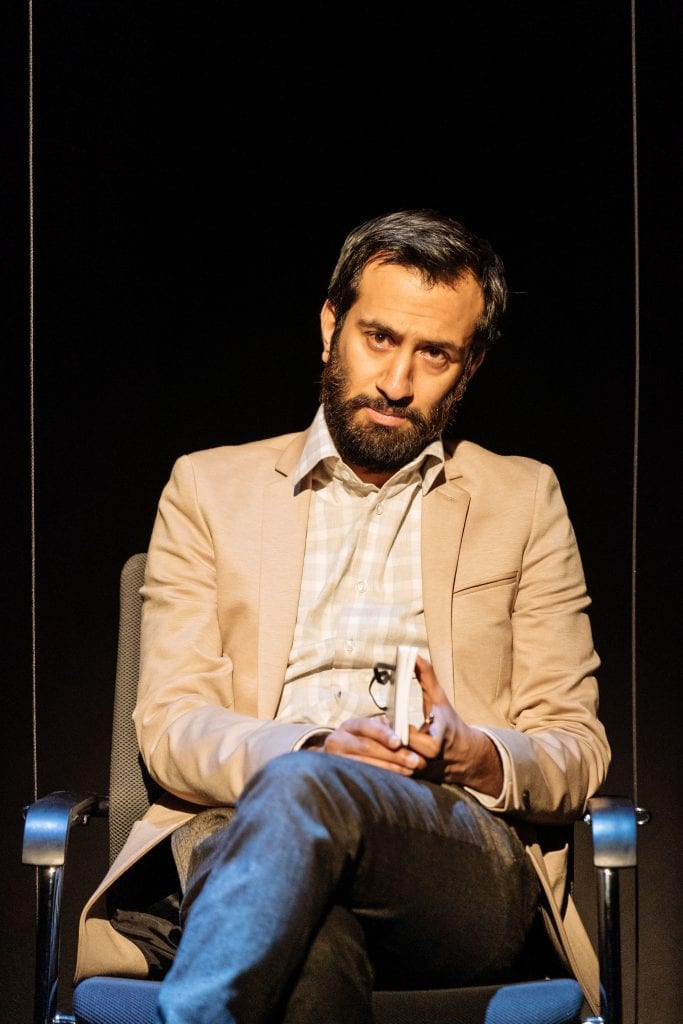 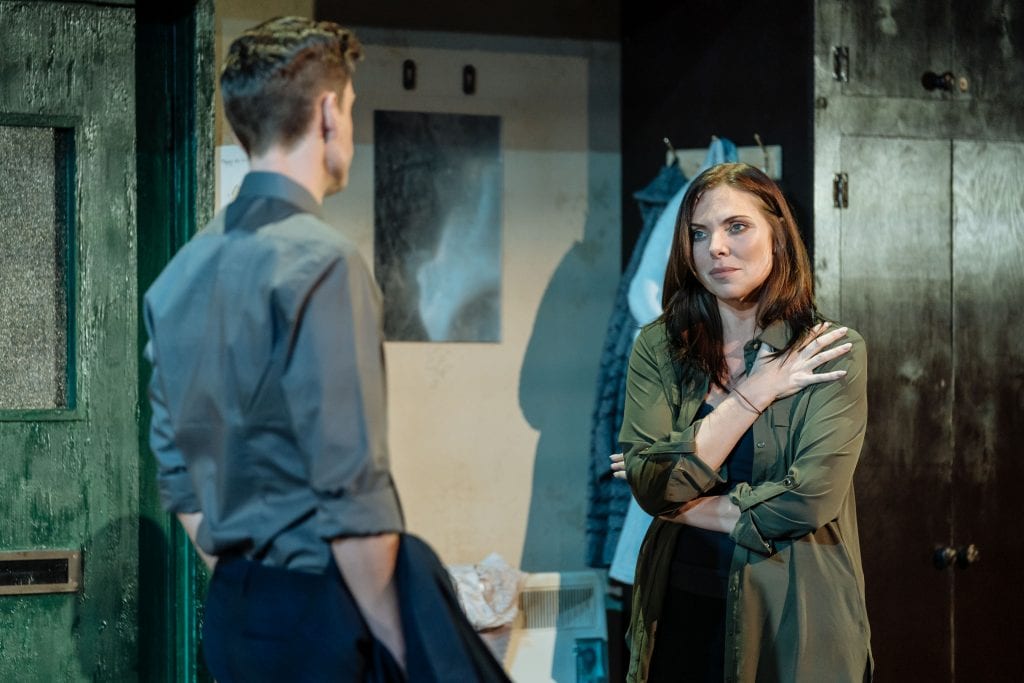 Girl on a trainRichmond Theatre