THE WEIR REVIEW AT RICHMOND THEATRE 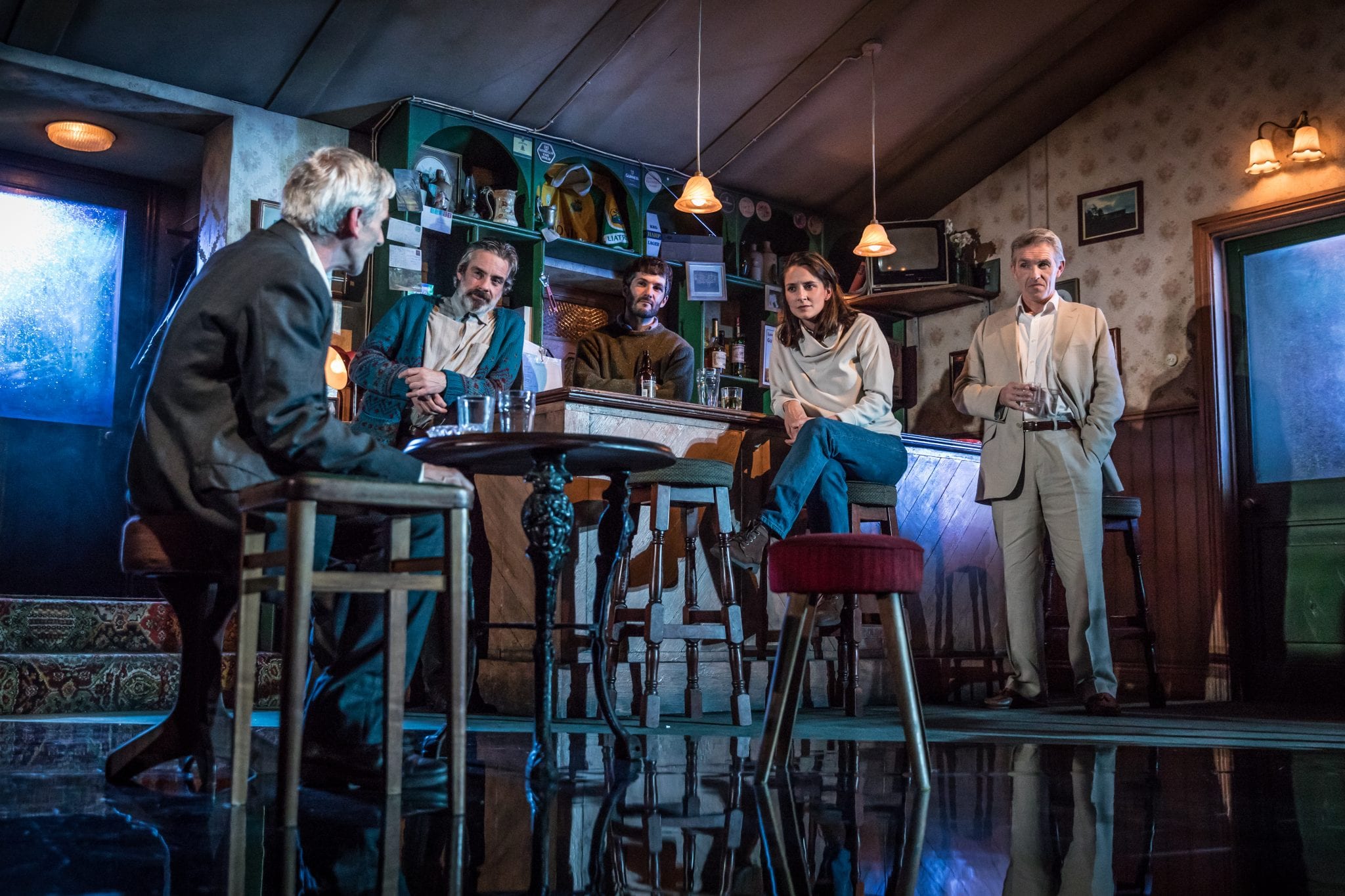 My friend John O’Brien reviewed “The Weir” at Richmond Theatre for the blog last night:-

“The Weir”, written By Conor McPherson in 1997, when aged just twenty five, is a gem. It is on all this week at the Richmond Theatre and is directed by Adele Thomas. They have a wonderfully evocative set by Madeleine Girling, enhanced by atmospheric lighting from Lee Curran and music by Richard Hammarton. The acting is strong and very convincing.

Go and see it, its brilliant. 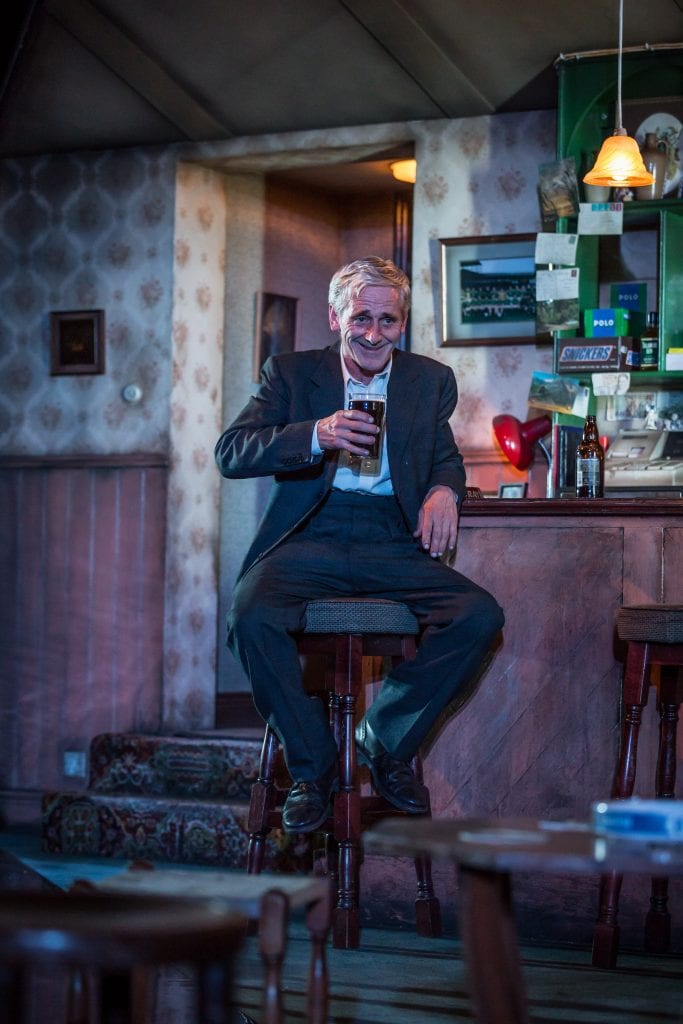 “The Weir” is a cross between Synge, Beckett and the Brothers Grimm. The influence of Synge is clear from both the setting; a pub in rural Ireland and the action; a group of people meet and talk in a pub, much as they do in “The Playboy of The Western World”. The long shadow of Samuel Beckett is apparent in the silences, pauses and non sequitur’s that give “The Weir” that feeling of entrapment, stasis and entropy.

Finally the storytelling around the campfire brings the element of gothic fairytale and the supernatural, reminiscent of the Brothers Grimm. Conor McPherson has put these elements together to create a modern classic. Indeed the most influential theatre critic of our time Michael Billington included “The Weir” in his 101 greatest plays of all time. “Its brilliance”‘ said Billington lies in “McPherson’s Chekhovian gift for the minute particular and his understanding of the Ireland that lies beyond Dublin’s affluent swagger”. 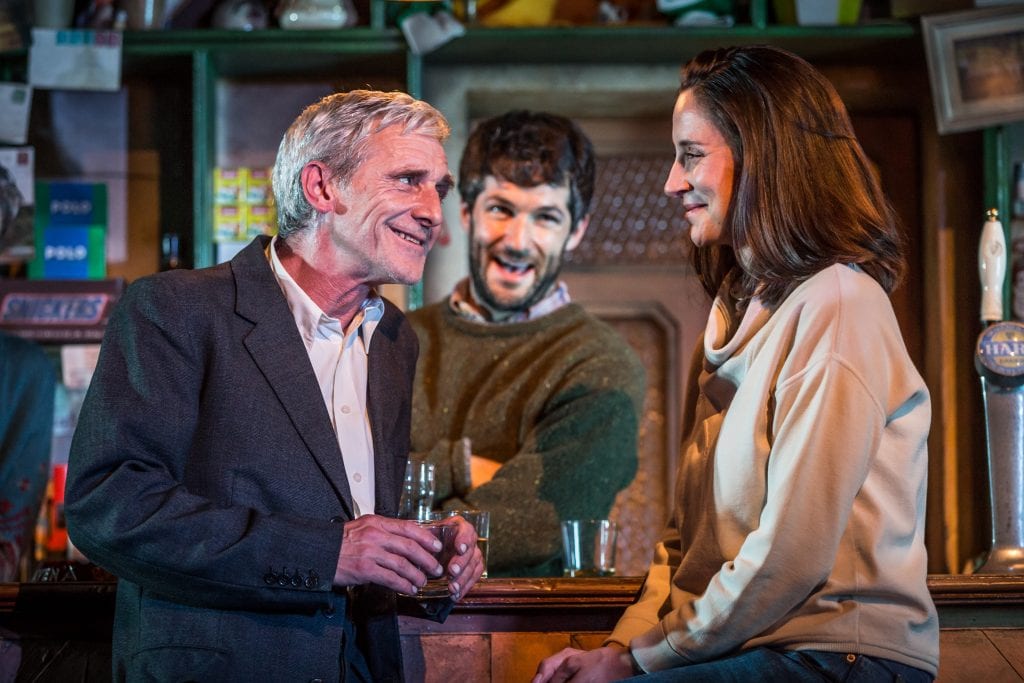 The action takes place in a pub in rural Ireland, on the West coast, with the Atlantic wind and rain howling in. It’s a bleak landscape. The pub is a refuge where the locals, mainly men, meet to keep warm by the turf stove, drink and chat. All the action takes place in the bar. There are no set changes and there is no interval. It is one continuous act as it were, lasting one hour and 45 minutes. This is crucial, because the magic of the storytelling would be broken if interrupted by an interval. It’s like a dream – wake up and its gone. Like Coleridge writing “Kubla Khan” and hearing the postman knocking. Disaster. Like the bar in “The Playboy of The Western World” the set is a key character in the play. It focuses the action. The bar is a microcosm of Ireland. A space to meet, drink, smoke, talk , reflect and fight.

“The Weir” is a five hander. Four men and one woman. Of the five, four tell stories in the form of monologues. The exception being Brendan (Sam O’Mahony) the barman who watches and listens, but doesn’t tell his story. Jack (Sean Murray), a bachelor and mechanic runs a garage in the village and has lived there all his life, as has Jim (John O’Dowd), an odd job man and “Scientific” gambler, also a bachelor and lifelong resident. These three are in the bar as per usual waiting for the local boy made good, Finbar (Louis Dempsey) to arrive with Valerie who has just bought a house in the village. 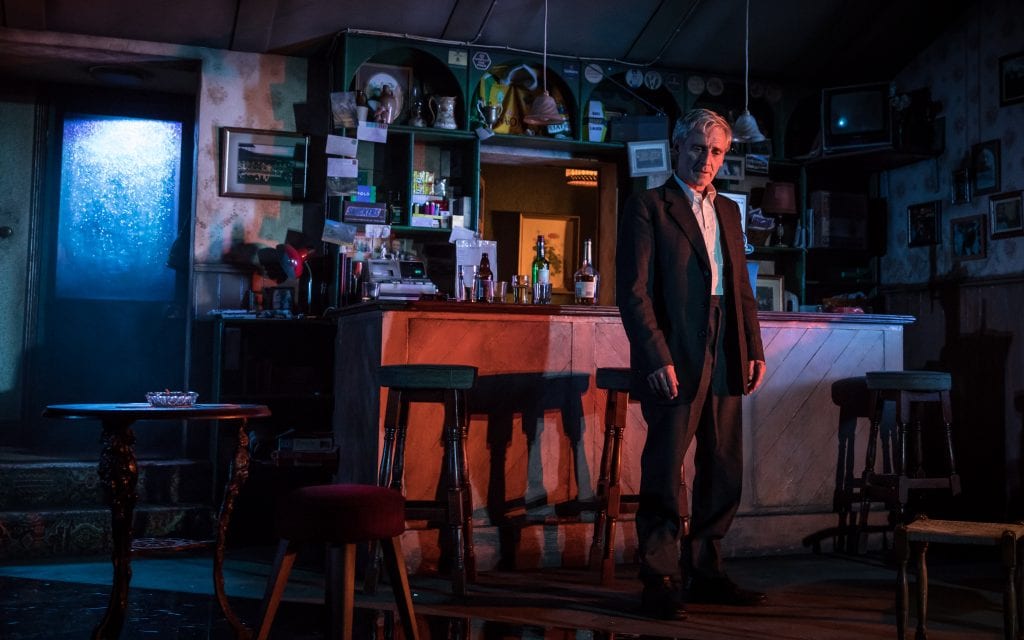 The action of the play unfolds as these five character’s, in search of meaning, open up and tell stories. It’s a cliché to say that the Irish are good storytellers but on the evidence of “The Weir” it’s true. The stories as they are told are deeply unsettling. Seemingly about Ghosts and Fairies they are in fact a metaphor for our search for meaning. I won’t spoil the evening by giving away the stories but suffice to say they are gripping and haunting.

But “The Weir” is not just four monologues and a few drinks. It’s a profound psychological exploration of the human condition. There is also much to enjoy from the comic asides (as when Valerie asks for a glass of white wine in a pub that doesn’t sell wine or have a toilet for women) and in the wonderful performance’s. I grew up in an Irish family in London and I recognise every one of these characters. They are utterly convincing. Take for example Sean Murray’s portrayal of Jack. He gets exactly the way he holds the cigarette between thumb and forefinger, the way he pulls on the fag and blows out smoke circles. I have seen this a hundred times. This is what Billington was referring to as the Chekhovian attention to detail. When Jack mentions that the bypass has left the village behind, marooned in the middle of nowhere we get a sense of his loss and bewilderment. Where has his life gone ? Nearly sixty and still single. And Brendan gives a hint of his plight when he says I’m trapped behind this bar serving German tourists and I can’t even understand what they’re saying. Its these small details that give “The Weir” such a rich texture and feel for the ordinary. Clever use of lighting and sound add even more layers of texture to this wonderfully haunting and unforgettable modern classic.