DOWNING STREET HOSTS THE LAUNCH OF “MY WAY” AWARDS

What a fantastic evening I had yesterday. AT DOWNING STREET. Just thrilling to be there. I was invited to attend the launch of First News’ “My Way” Awards with Henry “The Fonz” Winkler.

The beautiful Francis Osborne introduced the event and I stood right next to her husband Chancellor George Osborne (he’s taller and better looking than he appears on TV). Then seven children who have all been helping the Government with their plans for special education needs each took to the stage to announce who they had nominated for the “Thanks For Helping Me To Learn My Way” award. Seriously, by the end there was not a dry eye in the house. Their choices included significant teachers, siblings and mothers. It was very inspirational to be there and to hear Henry Winkler talking about how each individual child should be allowed to learn in the way most suitable for them.

We had drinks after that and I talked to Frances Osborne’s mother all about her daughter’s book and Africa and stuff. So interesting. I told her that my Grandmother always claimed to know where the gun was hidden – the one used to shoot Joss Ackland in Kenya during those White Mischief years.

Whilst on the balcony we could see the pretty courtyard garden of Number 10. We watched David Cameron finish a casual outside meeting and then stroll down to the play area to mess about with his children for a bit.

Here I am with my friends posing outside Number 10. Honestly, not in a million years sitting in Hong Kong drooling over The Fonz whilst watching “Happy Days” would I ever have predicted that I would be standing outside No.10 Downing Street having my photograph taken with him 35 years later. Really not sure why I decided that it would be a good look to pretend that I was Henry Winkler’s second head. Even worse than that, immediately after the photo was taken I gave him a huge hug and told him I loved him. I CANNOT believe I did that. Possibly the most uncool thing I’ve ever done:- Look at this iconic London view that I took from inside Downing Street on our way out:- 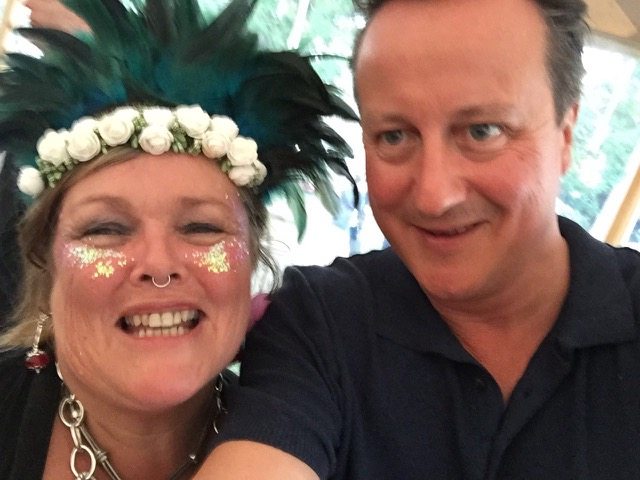 LOVE this picture! I laughed out loud when I scrolled down and saw your face up on his shoulder. Brilliant! Haven’t seen The Fonz in a few years, he is getting up there.

It was great – and yes, you see? I really did have my head on his shoulder. Very odd behaviour. Lx

OMG sooo jealous!! And obviously you love HW so much you have become one person (with two heads!)
Never stop blogging – it’s life changing, exciting and worthwhile and don’t let anyone tell you otherwise! Your children must be proud, proud, proud. The Fonz and Downing Street! What a role model! Xx

Aaaaah. Thanks. Well I guess it is down to my blog that I got to Downing Street so it’s not all bad is it. Lx

Great photo. Super cute with the Fonz. And nice legs on all the ladies…

did you see my photo on the steps from when we went with the brownies? Didn’t go inside though, lucky you. You do look very excited!

Looking as sexy as the sexiest second head ever!!! Thanks for the offer of Saturday, sound fab but sadly already committed to something else, hopefully another time xx