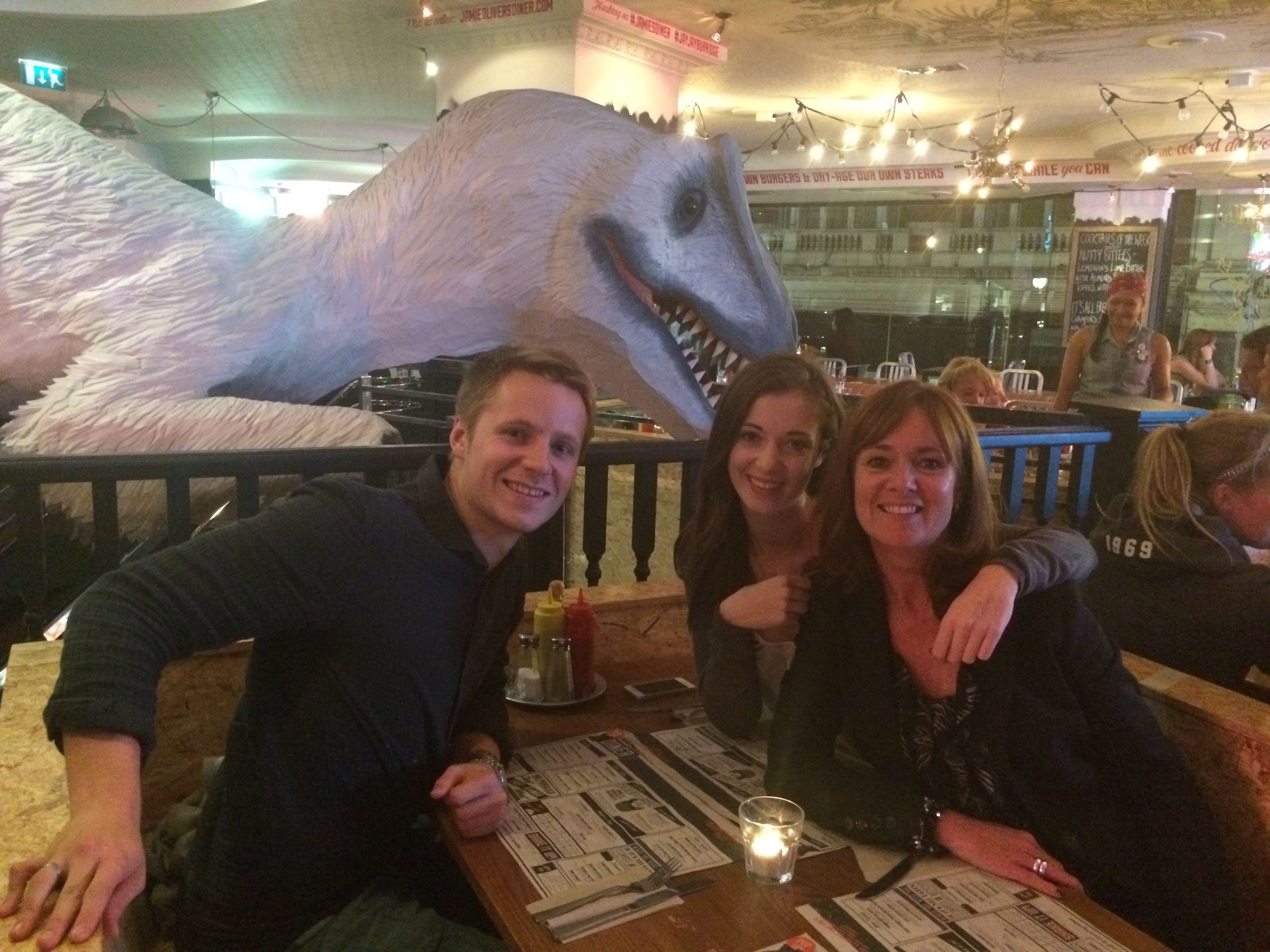 FAMILY AFFAIRS
I have been at home all week without my children and consequently I have barely slept at all. Fitful, hot, cold, toss, turn, up, down sleep that leaves me feeling exhausted every morning. Apparently I am also going through another “transition” or life change which I can’t really talk about but it seems to involve sleepless nights and hot and cold sweats and then hopefully I get better. (In case you were wondering, I’m not coming off heroin or having a sex change).

My baby boy (now taller than me) came back from Thailand yesterday Woohoo – in one piece and looking great…but (why is there always a but?).. with an earring. I am not happy about this. However, it seems that everyone at his school has one and so does the friend he went with, so instead of going mad, I decided to take counsel from my two older children, which involved a lot of furious texting – them poolside:-
a) because you have to pick your battles and I’m not sure I’ve got any “YOU HAVE TO WAIT UNTIL YOU’RE SIXTEEN” energy left anymore because I had to do that with the other two
b) because they are generally even stricter than I am these days – mainly in a – “WHAT DO YOU MEAN HE’S GOT AN EARRING!!!?? YOU NEVER LET ME DO THAT AT HIS AGE!! SOOOO NOT FAIR! They were quite chilled about it actually and suggested we wait for them to get back so that they can see it but my daughter quite rightly pointed out that he needed to get a blood test owing to where he had it done, but I reassured her that of course that had been my first point – but he did it himself and so all should be well (gulp).
c) Mainly I told him that I feel bad for the family that took him abroad because if I had been responsible for another child I’d have been very unhappy to have to hand them back with little holes in that hadn’t been there before.

I told him I wasn’t happy about it or his choice of large sparkly diamond, which by the way wasn’t in the right place at all so best to take it out immediately and let it all heal up, but instead he promptly reappeared several minutes later with a large black blob instead which, on closer inspection has a small cannabis leaf emblem on it.

STILL he brought me home the most thoughtful present ever – a little wooden elephant which I love, to go with my hippos (and of course the tusks are only plastic and of course we have to be aware that a lot of the real animal horn and tusks goes through Thailand to be carved and/or on to China to be used in medicines so still a long way to go there) and it says “OM” on the back (I think) which I need to be reminded of now and then:- It was very strange to have a week where things remained in the same place in the house and there wasn’t a new pile of shit to be dismantled anywhere to be seen. As I came in from work it was eerily quiet and gloriously tidy – they really have no idea how much mess they make do they? Very unusual for me not to be muttering about unblocking the sink of teabags and other detritus each evening. But maybe now the revision is over she isn’t going to go through industrial boxes of tea anymore anyway.

So what else? I can’t even think what has been happening – it’s been a tumultuous August on every level not just personally, but the seemingly viscously awful state of the world in general. That old cliche that “nothing happens in August” has been brutally dispelled yet again. The world feels chaotic and scary this August; Gaza, Syria, Iraq, Russia, Ukraine, lost girls, potential ash clouds, heightened terrorist threat to London, Rotherham, Ferguson, Ebola – more world disorder than usual – and what do we all do about it in the West? Blame our leaders and in particular the UN, then quickly sneak over to Mail online to check out Angelina’s dress and increase our uploading of ice bucket challenges to Facebook.

So on a lighter note – what have we been up to in the last few weeks?

1. Saw “Boyhood” with my daughter – loved it – in the best cinema on the planet if you are ever anywhere near Barnes. This film is very slow moving, I’m sure you know, shot over 12 years using the same actors. Beautiful cinematography and so poignant and relevant to where my life is going….I have now told all my friends to see it

2. Been to Paris where I now want to live and skip about eating croissant and speaking fluent French and trying to look like those older beautiful French women who all have affairs with Le President – although I am getting a little tired of all the “How To Be Gorgeous Like Us” French women books are out in the UK for us poor, fat, slovenly British women (and interestingly they never mention hair dye).

3. Had to sort a wasps nest out in my garden. This was sad and I agonised for days as I HATE killing things. Then I went online and got terrified about what happens when they get hungry and sting you to death and the nest could be the size of my house containing thousands upon thousands of them. So then I searched for someone to come and sort. Prices range from £280 if you want a man dressed in a space suit to do it or £40 if you want a man in a pair of shorts and flip flops who thinks that the former companies who charge extortionate prices ought to be had up by the standards authority – at least that’s what I think he said – he was angry about the ridiculous price hikes given it’s the same stuff and ultimately you are looking for the same (very sad) end result. Sorry wasps. Really, really sorry.

4. Did you know 100,000 African elephants have been killed in the last three years across Africa? This is a horrendous state of affairs. 6. I had coffee in The Wolseley, posted an Instagram photo of it and got an immediate angry response from my daughter in Greece saying “what are you doing there without me??” 7. I ate very badly whilst the children were away – either foraging in tin cans (see previous post) or hopelessly overcooking my sweet potato (African comfort food) because I was over at my friend’s house drinking wine and feeling sorry for myself instead (please ignore unhealthy knob of butter – obviously I scraped it off and threw it away when realised the error of my ways):- 8. Finally got to The Curious Incident bla bla with the kids after missing out last time because the ceiling fell down. We all loved it. Will do a separate review but in the meantime, here is a photo of the three of us having dinner afterwards at Jamie Oliver’s pop up diner in Picadilly where my daughter’s head is about to be eaten by a T-Rex:- Have two things to say;
Ah! have you really reached ‘that’ age?….
and,
You should really wear a hat when you meet Her Majesty.
x
ps It has been a funny old August – need to all meet up and catch up xx

Have I really reached WHAT age??? I know. Was no time to find a hat. Yes catch up sooooon Lx

Hi Lucy
you are hilarious and I love your sense of humour. I often read your blog to see what your up to. I hope thats
not stalking haha

I miss your class so much I know you have moved on but i wish you would start one again .
Love Michelle

Aaah thanks Michelle – actually been asked by a few people to start up a class again so thinking about it – maybe in the new year I will. Love to catch up though….. Lx

That would be fantastic. Lets catch up soon I’m flexible so whenever you like give me a call .

Will do – off this week so will be after that! Lx

I think my main worry about the earring would be that Thailand is not going to be one of the best places to get blood poisoning! He’ll regret it later if it really is in a bad place, especially if he wants further piercings. I’d stick with the get it healed up but then agree to let him have it done in a better spot (his eyebrow – LOL JK) afterwards. 🙂

ha ha eyebrow will be next. OH I SEE – that was what M meant – perhaps I’m menopausal – HOW DEPRESSING Lx

It was indeed….and I thought it was that to which you were referring!
x

Wait ’till youngest starts getting other bits pierced…then you will have something to worry about. ha ha!