PARIS IN THE SUMMERTIME 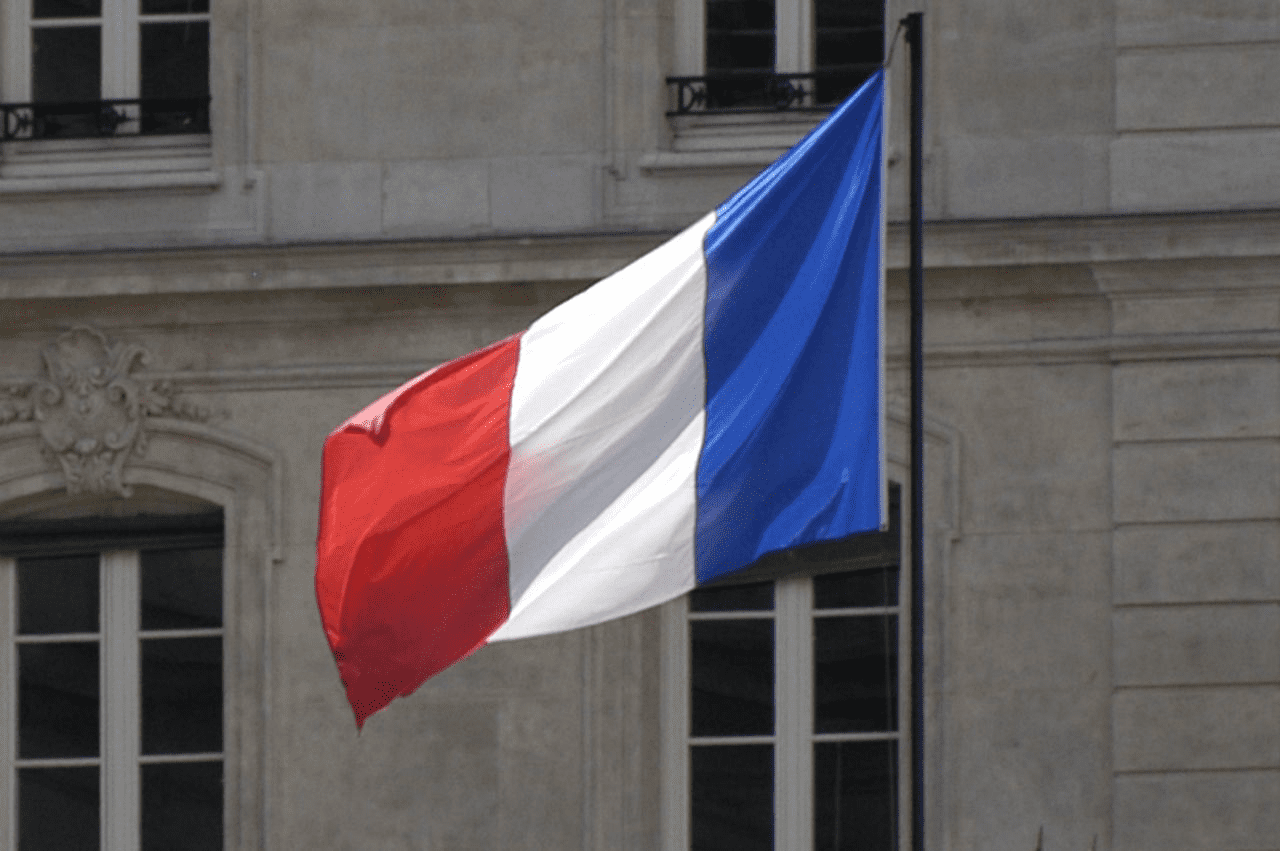 I know I’m not the only one who comes back from a holiday armed with thoughts of buying a second home in the simply divine place you’ve just been, or a teeny weeny bit of land on which to build your dream house from afar – or even if you’re a little bit more of the cautious type, then perhaps renting for three month periods and learning the language and zipping over on Eurostar three times a week to commute and wouldn’t it just be heavenly..

I have just done exactly this in Paris where I was for a company team jolly, checking out the sights and flavours of this beautiful city. With it’s timeless familiarity, there were not many of us who had never been before, but whether we were regular visitors or first timers, the recognisable monuments and highly stylish uber cool city continues to keep itself at the top of the list of cities to visit in more ways than one.

I have literally been making enquiries as to where I can go to learn French (this is my friend’s fault who is off to Spain for a month to immerse herself into the language and come back fluent). My French friend has offered to help but says that a French boyfriend is by far the best way to learn the language. I’d be too embarrassed though to go down that route. Imagine having a romantic dinner with a gorgeous French bloke and all I can say to him is “would you like to buy some potatoes/ham/eggs” or “where is the bakery”, “thank you…can I have three croissants please.”

Our first experience was a wonderful river trip along the Seine, where you could get a real feel for how the city was laid out as well as check out the bodies on the plage as they make the most of their limited space!!

Literally the view from the boat:- 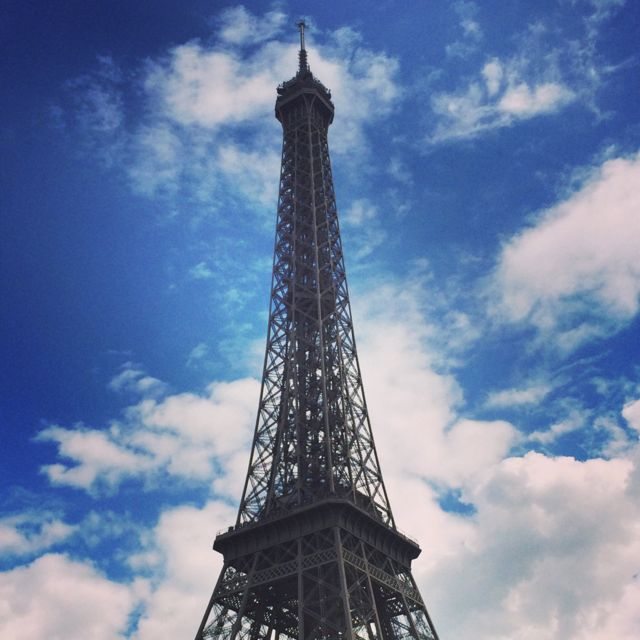 Notre Dame in all it’s glory:- 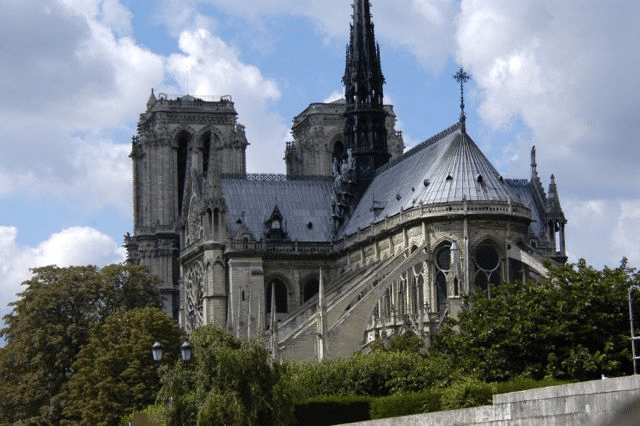 Check out the sandy beach!:- 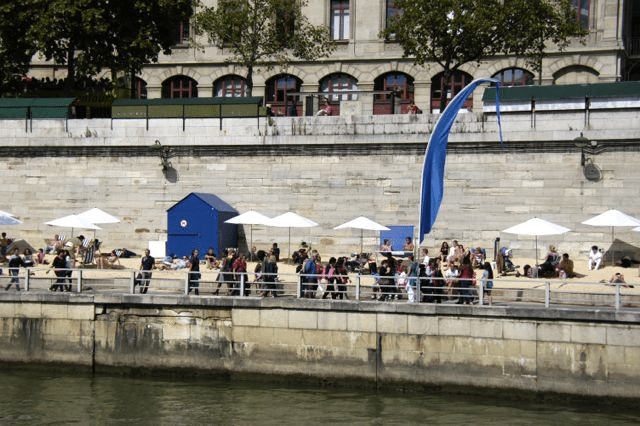 I hadn’t appreciated that the bridge of love where you go and add a lock and seal your love for whoever was actually bridges of love – all of them had locks on! Vendors were busy selling locks in plastic packets. It slightly took the edge off it for me. 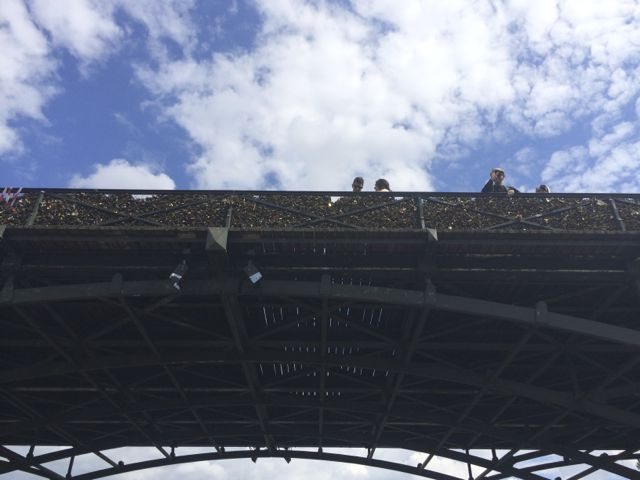 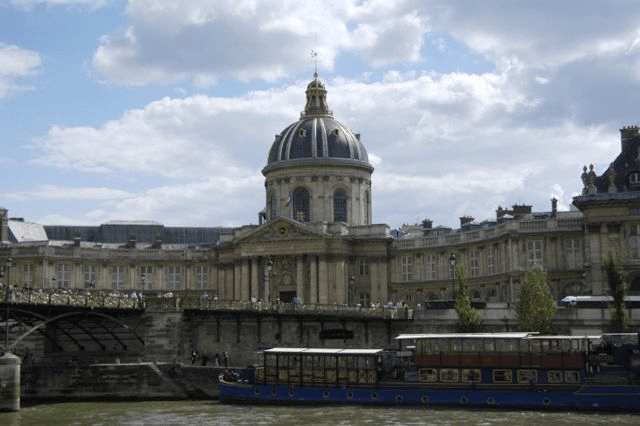 We stayed in Montmartre, right near the Moulin Rouge, but just a small wander up the hill to the Roman-Byzantine basilica, Sacre-Coeur, with it’s fabulous views of the city and eclectic mix of bohemian life. Very easy to imagine how it was 100 years ago, a dangerous shanty town on the city’s fringes. Because it was free from Parisian taxes on wine, it was the cheapest place to drink. Prostitutes paraded the streets and the dance halls such as the Moulin Rouge down the road did a roaring trade. Cheap accommodation in addition meant that the area attracted penniless young artists from across Europe. Picasso was just 19 when he arrived in April 1900, Matisse around the same sort of time. Van Gogh and Renoir as we know captured the images in paint. Lots of great little restaurants and cafes abound – a must for a walking tour of the area around all the little back streets and you can still hope that Montmartre remains a place to capture and develop the talents of our future great artists even today. THEN what about Hemmingway? The authors. Again. Inspirational. I’d love to see a film about it all. Is there one? Such a rich time for creativity.

Us trying to be creative:- 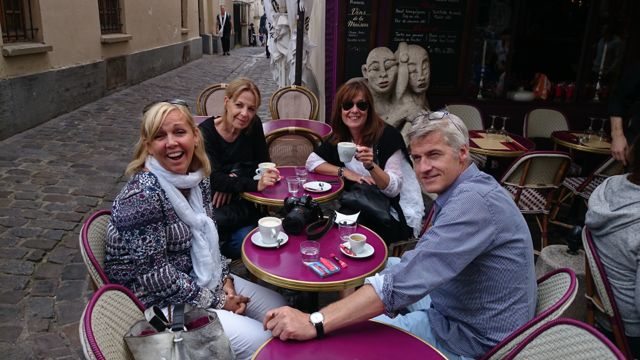 My arty shot of Sacre-Coeur which would have looked better without my attempts to improve:- 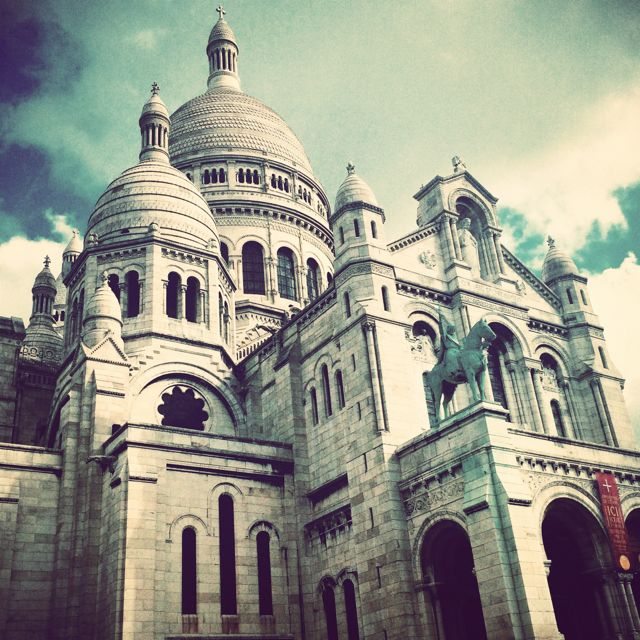 View from the doors of the basilica across the land:- 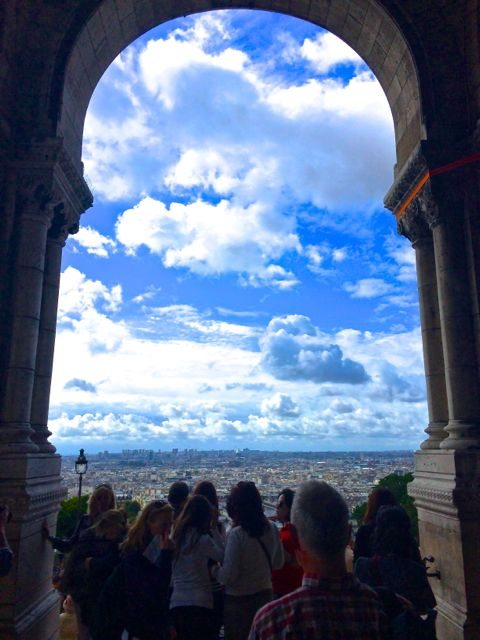 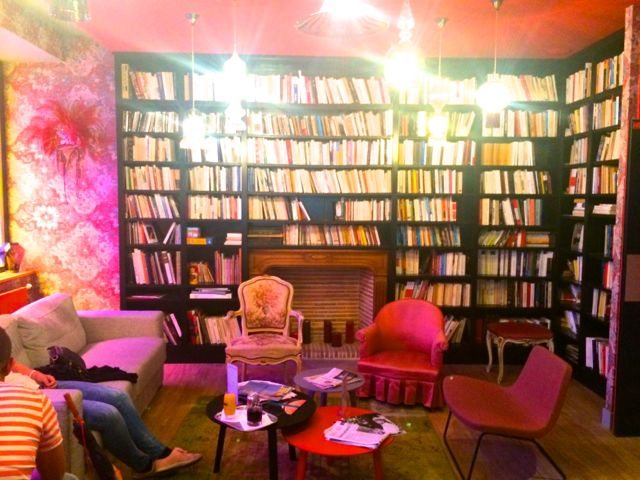 Our first meal was at the very famous La Coupole, steeped in history having opened in 1927 and the restaurant that Balthazar and many other French style brasseries have emanated from. A wall of black and white photos featuring the likes of Sartre, Hemmingway, Simone de Beauvoir and many other famous regulars an enormous 450 seat brasserie with a cover of around 1.4K per evening. It is big and buzzy and an experience that shouldn’t be missed. Beautiful French people galore…and us:- 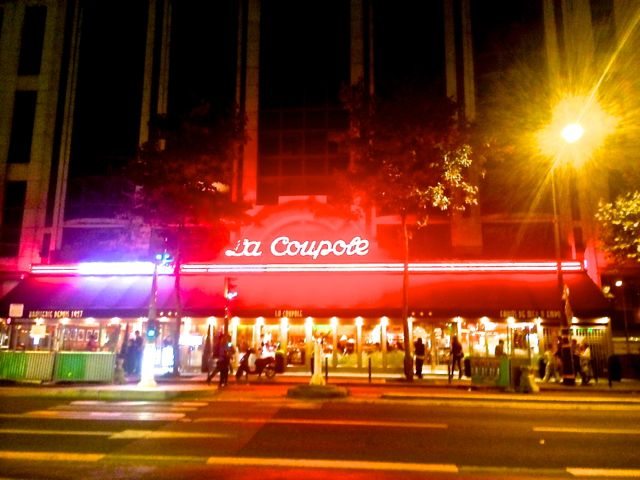 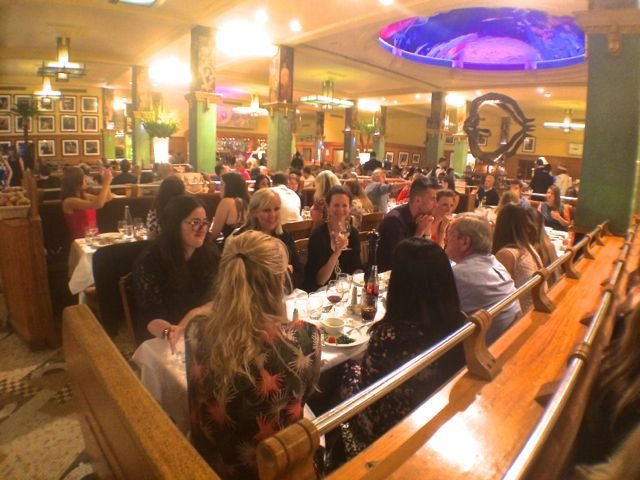 This surely must be their signature dish? Creme brûlée to DIE for:- 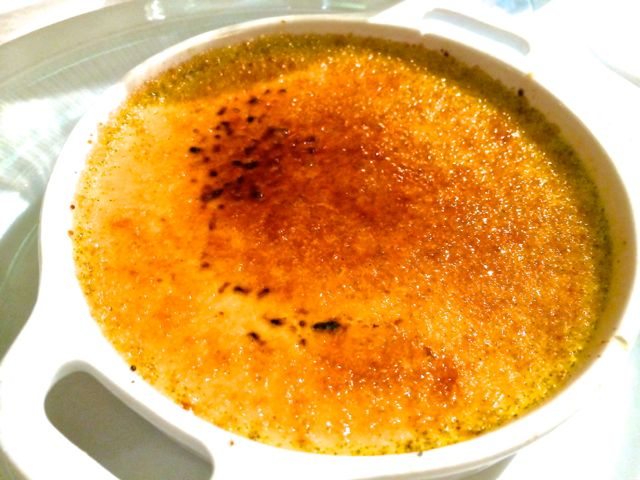 Our first evening was a little messy and divided. Too many of us to co-ordinate – it was like herding cats. We ended up in a little bar directly across the road from the Moulin Rouge drinking this – cafe cognac (well the boys did – girls drank Pastis and Quantro and all manner of exotic digestif! 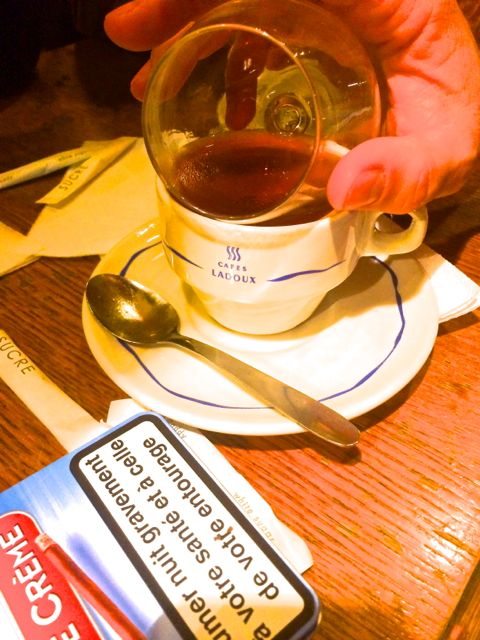 The next day we all chose a number of different tours – a three hour walking tour, a wine and cheese tour, a trip to Versaille or a tour on a bus. There will be other reports coming out on all this, but I can highly recommend the walking tour of which about 17 of us took – starting in the city’s largest square, the Place de la Concorde under The Obelisk laid out in 1775 and designed with Paris spread around you – with views of the Eiffel Tower, the Seine and along the Champs Elysee. Our lovely tour guide explained that this was where all the guillotine executions took place until the last one in 1977! 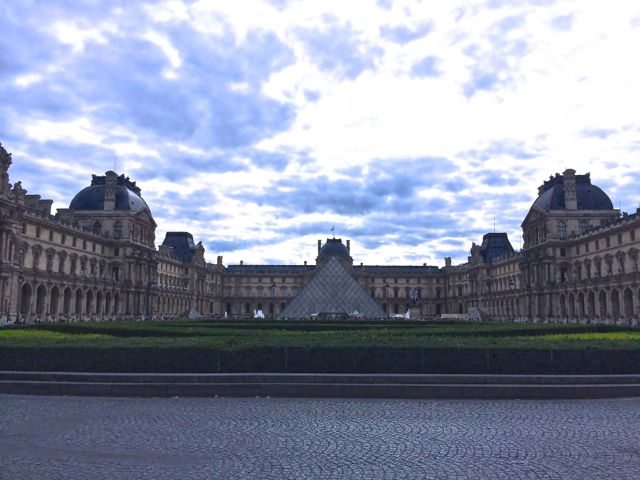 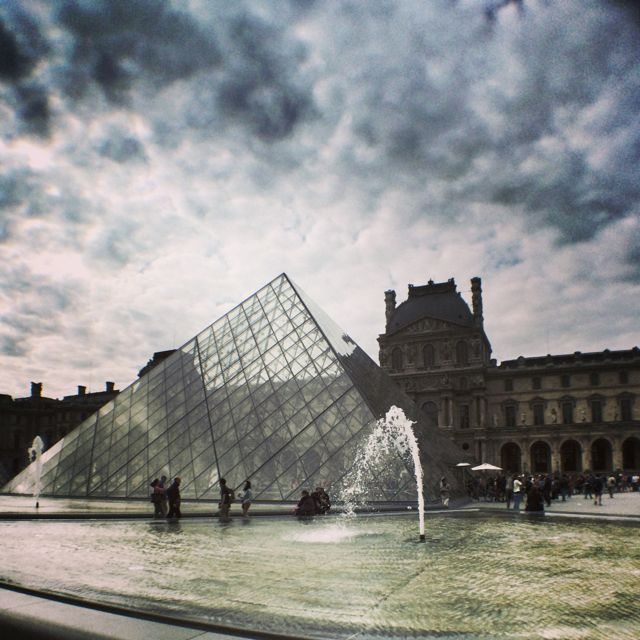 Our stroll took us here – can’t remember the name – my sort of child’s playground!! 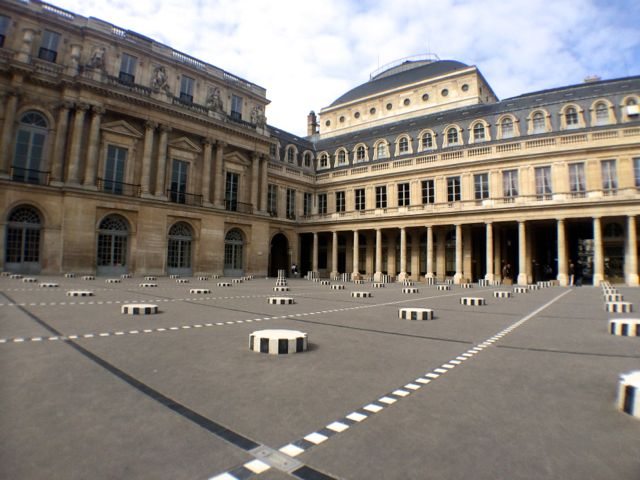 The cafe where we stopped for coffee and cheese! Not entirely sure why we didn’t have wine – cheese and coffee are not complimentary!:- 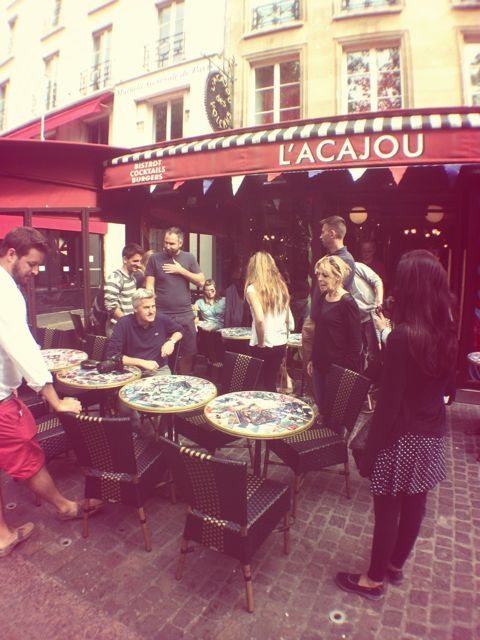 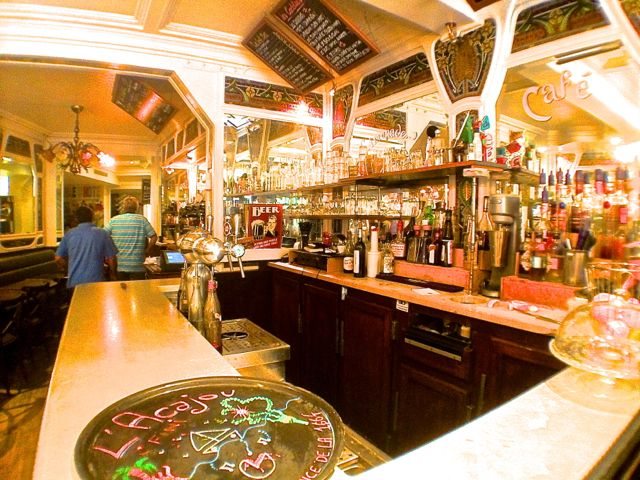 Love this picture, think outside the archive museum – lots of archetypal characters in the shot!:- 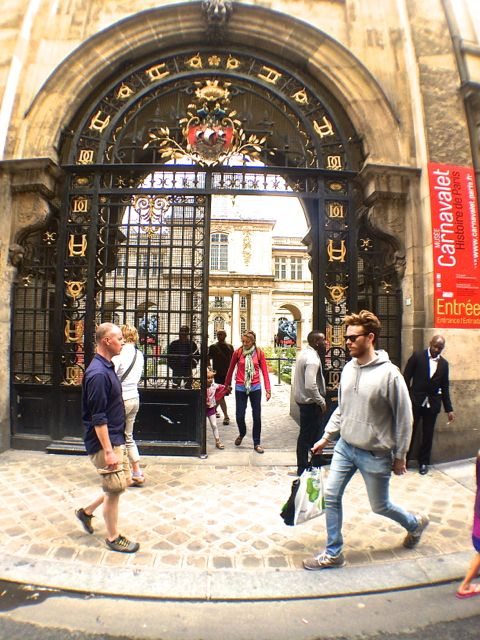 Stumbled upon a wizard:- 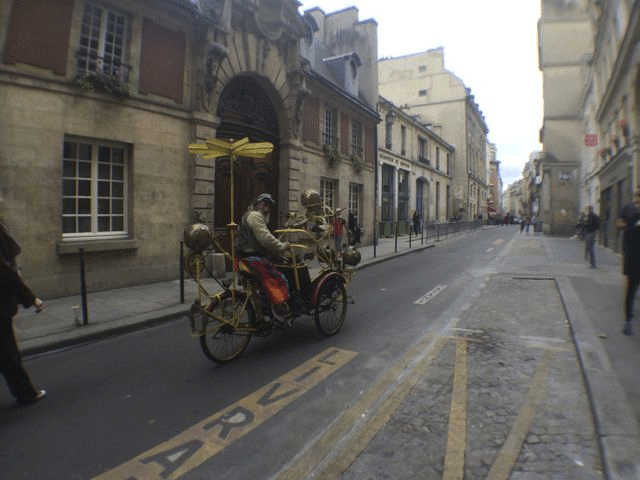 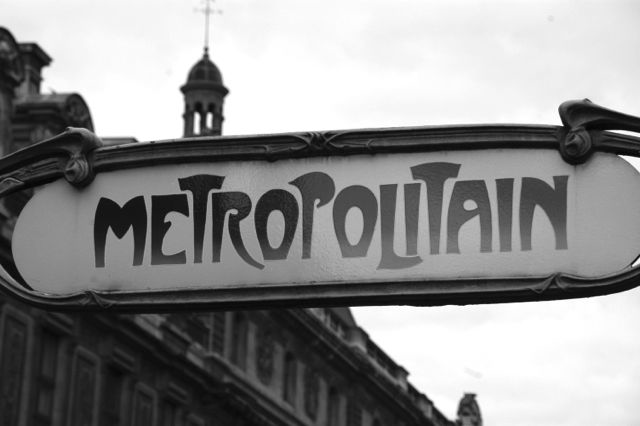 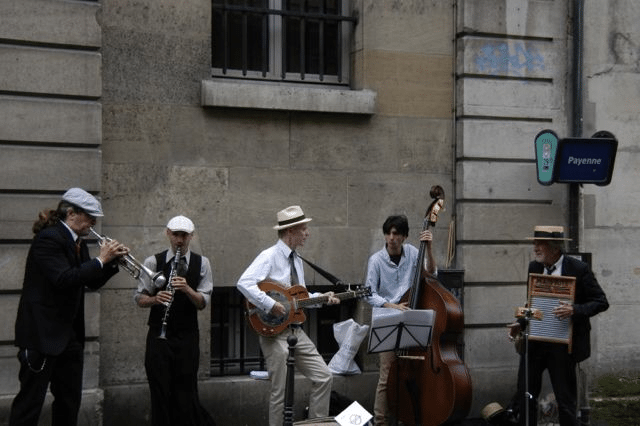 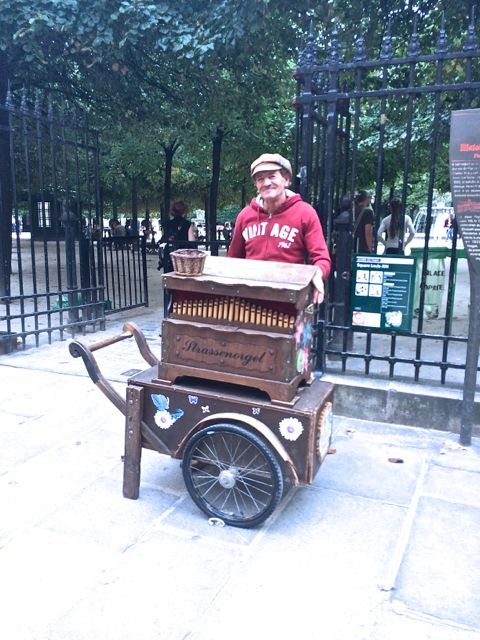 That evening we went to another very French restaurant called Le Chartier – again very Parisienne and massively popular with queues around the block:-

Food a bit average, but inexpensive and frankly you go there for the ambience:- 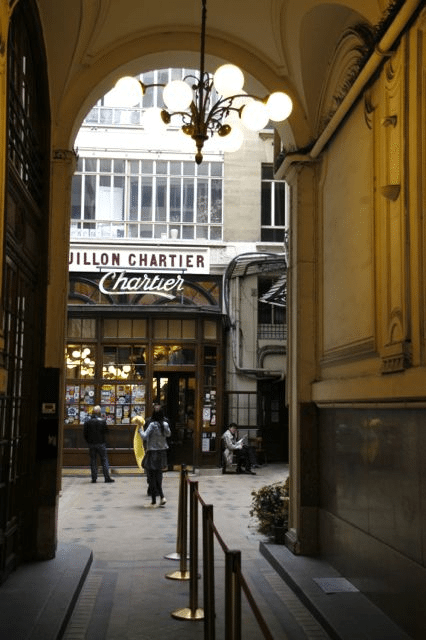 The French waiters were falling over themselves to be helpful – unusual, but not in the context of there being about 30 gorgeously young and beautiful PR girls with us:- 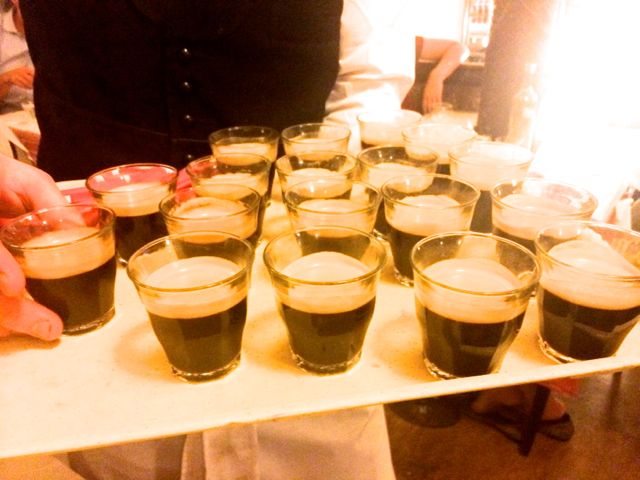 That evening was messy – photos have been deleted. Next morning consisted of croissant and strolls around and about and a very quiet journey back on the Eurostar – but it’s all so easy to go there for a few days – and I want to do it every month! 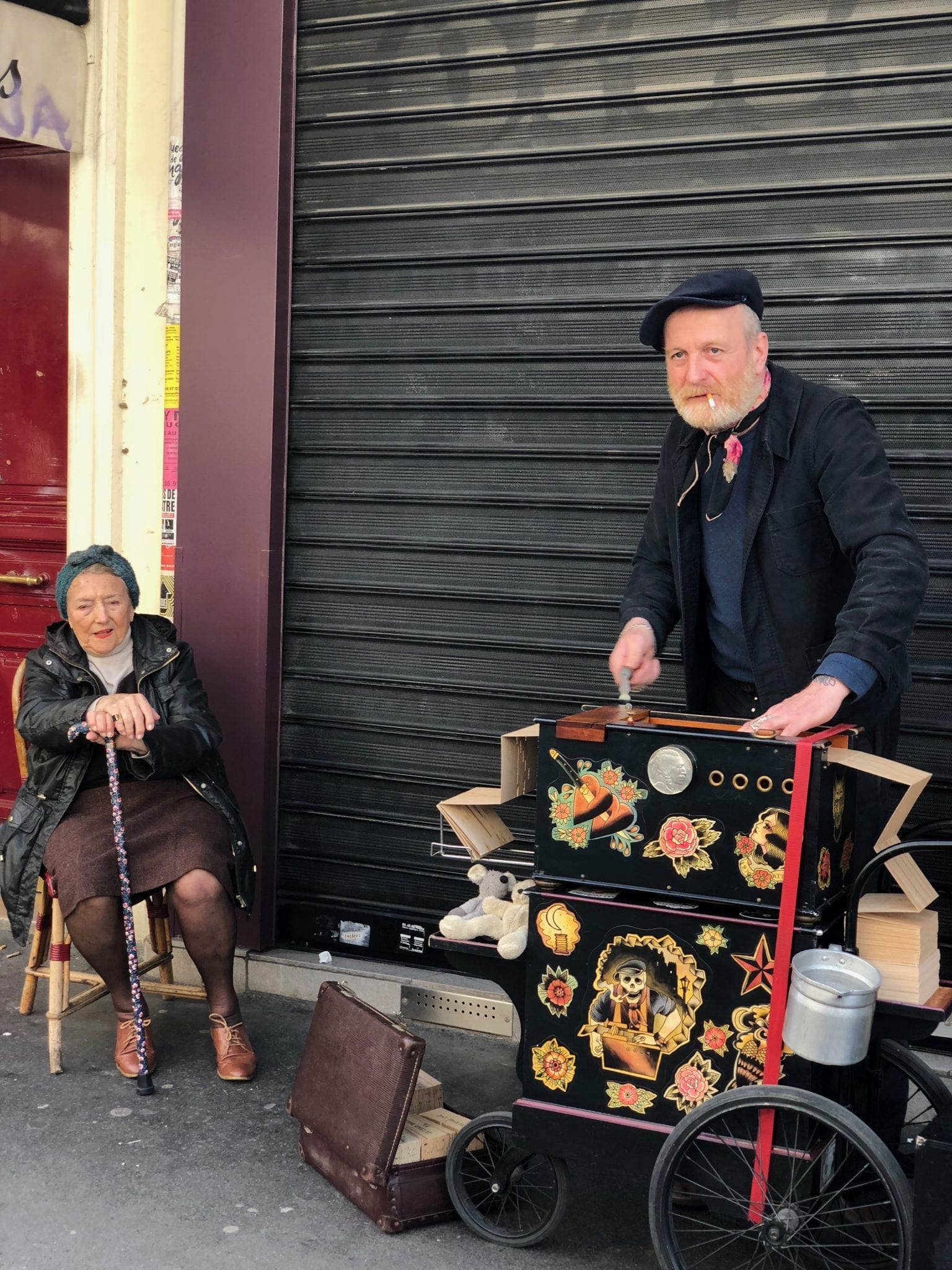 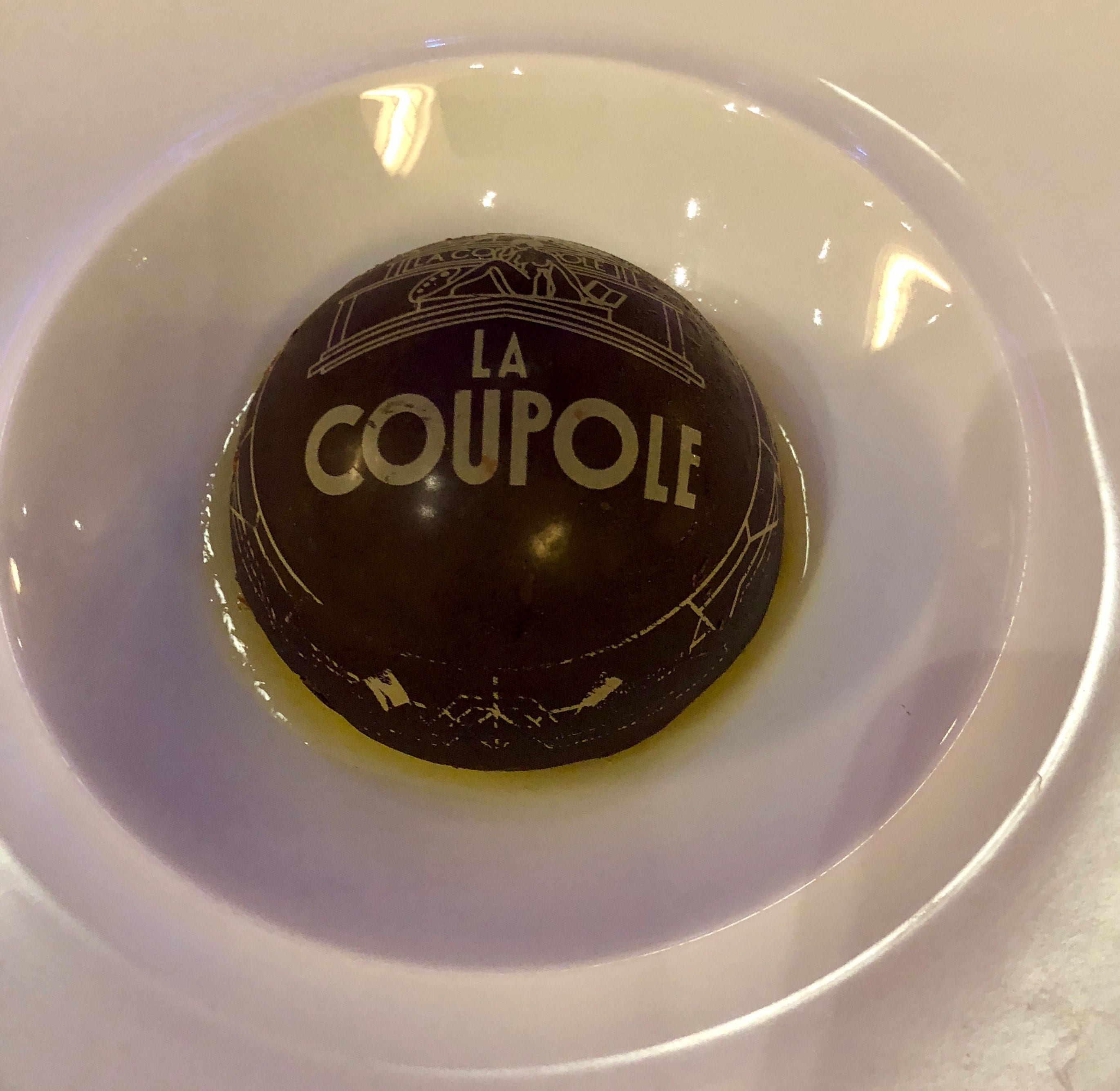 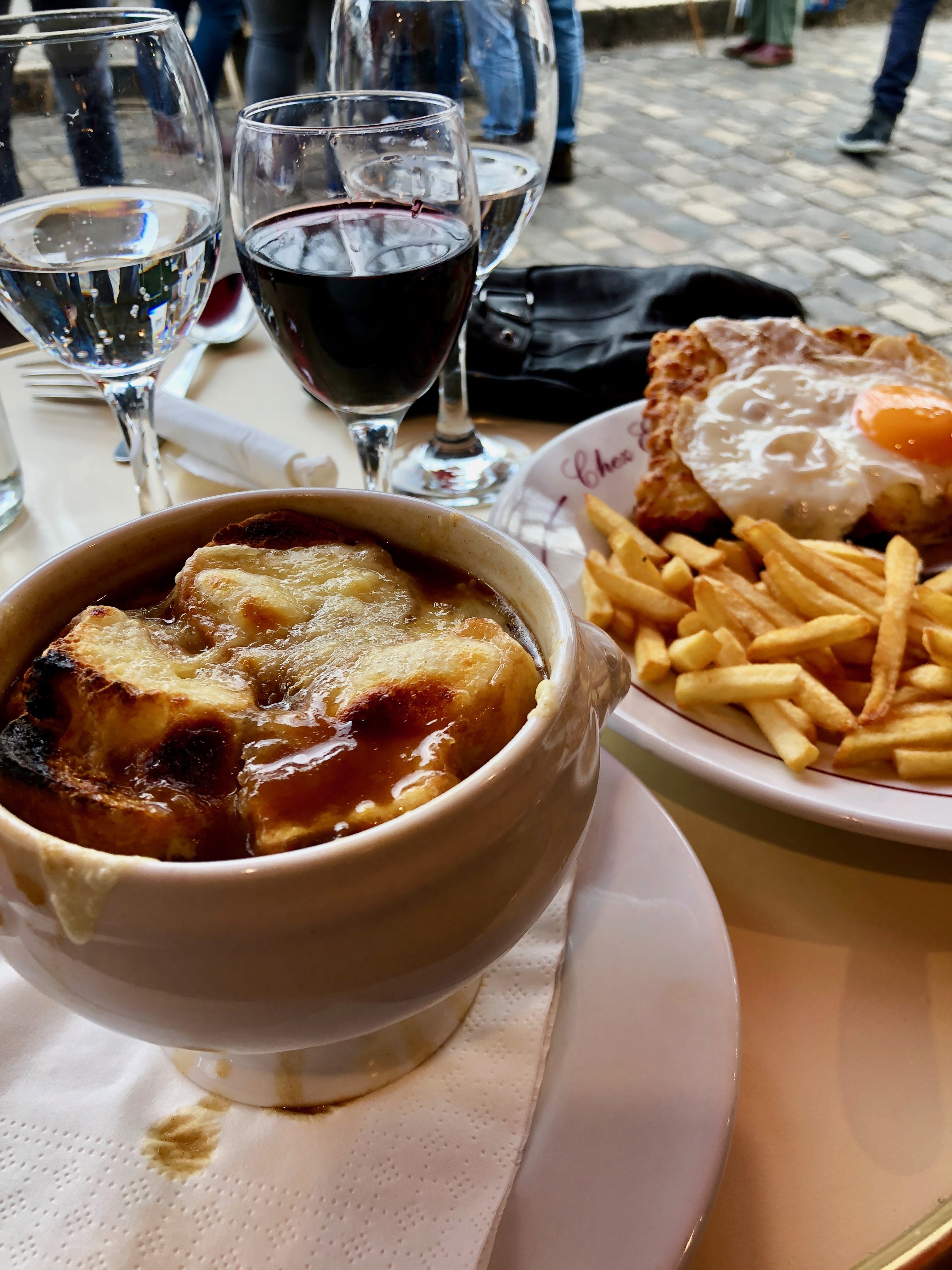