FAREWELL TO OUR QUEEN 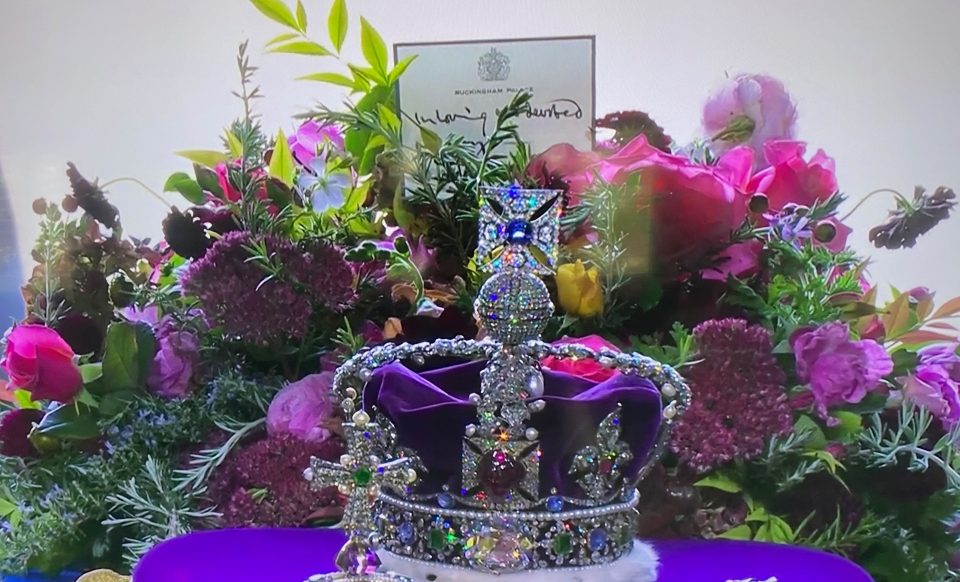 There are no more words left to describe our nation’s collective loss of our Queen.  Her funeral was today and the whole world seemed to be there, an extraordinary collection of people all there to say a final farewell to our Queen.  It was the grandest funeral the world has ever seen, an astonishingly colourful national send off, with more than a million people lining the streets and notably the largest television audience in history with four billion people watching it worldwide.  It contained the largest congregation of world leaders since her father’s funeral and included President Biden, arriving in “The Beast”, Macron, Olena Zelenska (the wife of the Ukrainian president), the Emperor and Empress of Japan, Jacinta Ardern, New Zealand’s Prime Minister, Justin Trudea, the prime minister of Canada – all with their plus ones and every former living British Prime Minister and many, many more.

I felt so proud of all the young soldier-bearers, I’m old enough to wonder what their parents might be thinking of them at that moment, those young, beautiful faces taking their role so seriously.  I felt so proud too of all those naval ratings, young men and women either clasping hands or holding the ropes in a tight knit formation.  Apparently humans are more reliable than horses, so after a horse bolted during Victoria’s funeral, they’ve pulled the carriage by hand at every royal state funeral since then.  Seeing the royal family walking behind her was incredibly moving too and I’m sure I’m not the only one who wondered just how close danger was to all of them being so exposed and walking alongside the rest of us.  It was incredibly touching to see the four children and then the grandchildren behind – observing both Harry and Prince Andrew out of uniform, for very different reasons.  But all that scandal melted away for the day as they and the rest of us came together to honour the woman she was to us, whether mother, Grandmother, Great Grandmother or much loved monarch.

The Archbishop in his sermon referred briefly to the trauma of Covid and also allowed us to think about our own losses.  It took many of us back to those heartbreaking images of the Queen attending her husband’s funeral and how alone she had to be in her grief.  It was the fact that she followed the same guidelines as the rest of us that endeared her to us – unlike her government who flouted most of the rules.  It was a reminder of her incredible sense of service and duty, but that she could finally be laid alongside him to rest – they hadn’t been apart for too long,  It was a wonderful, post Covid funeral of the highest order.

I found it so incredibly moving and impressive, that I was stirred to head up the road to pay my last respects, with all her other subjects, us ordinary people from all walks of life, as her coffin was driven to her final resting place.  The crowds were silent and respectful, but we quietly chatted with strangers and held our phones up high whilst craning our necks, we were sombre, but not sad, more proud to be part of a once in a lifetime moment of magnificent, majestic magnitude, rather than mournful. 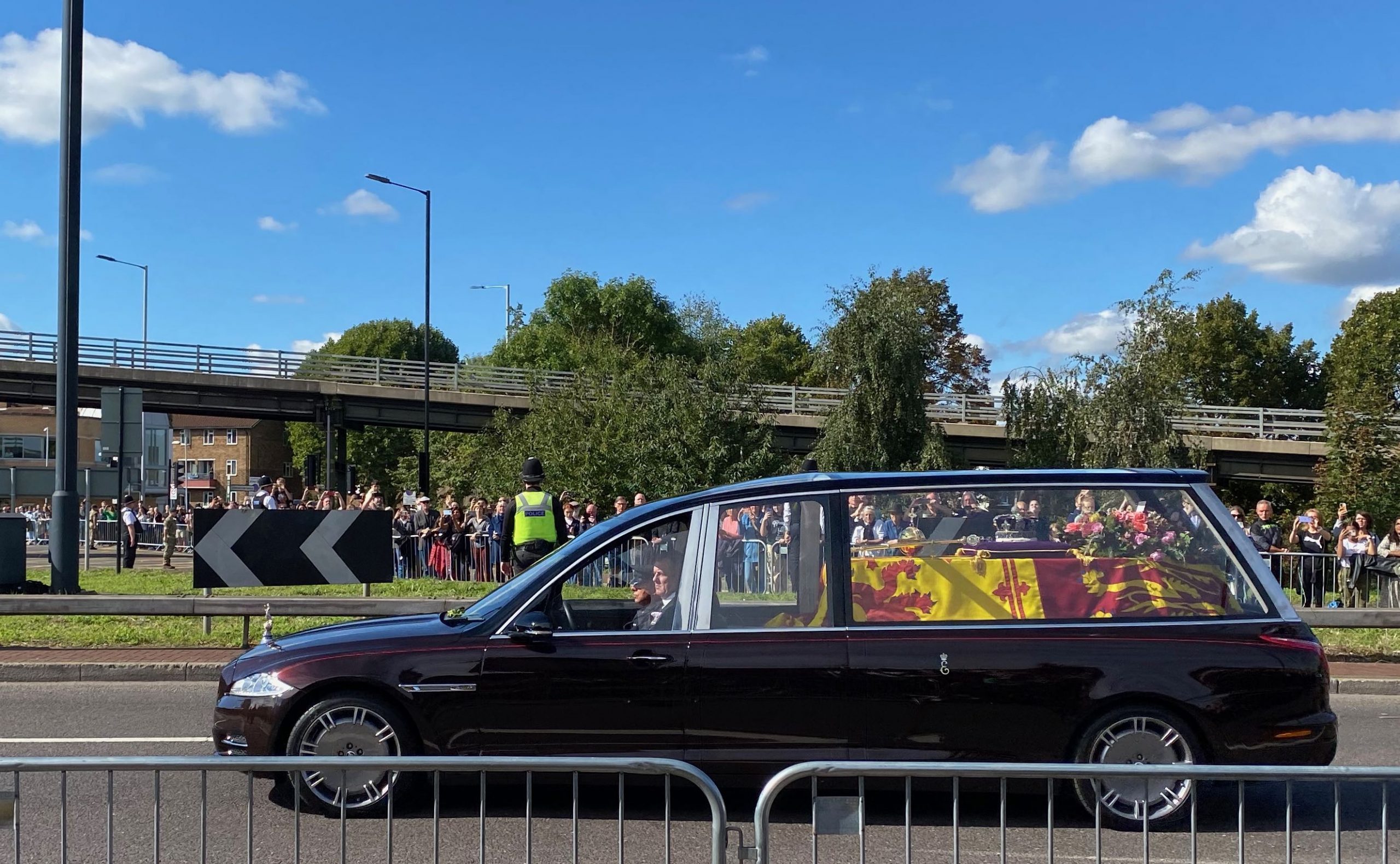 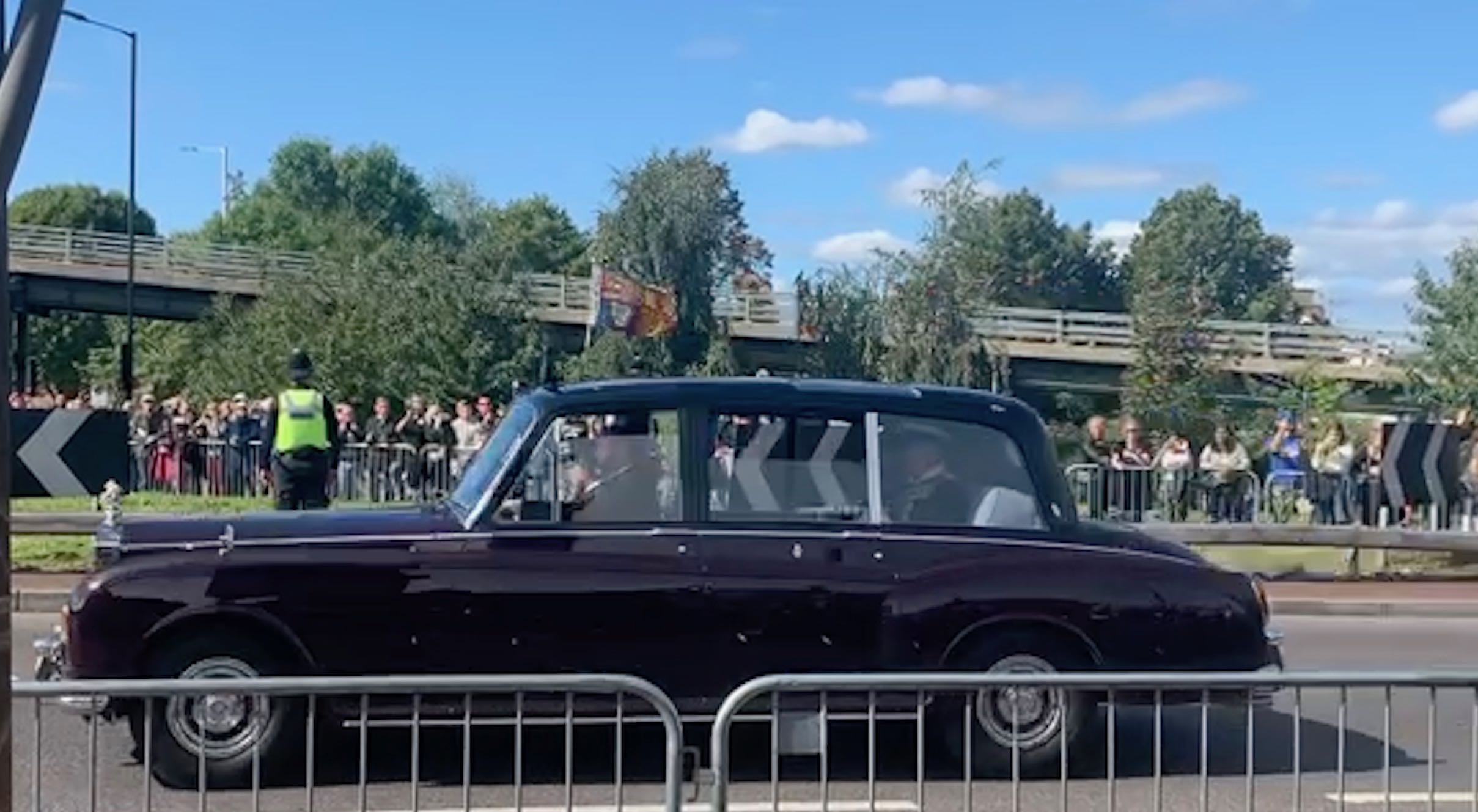 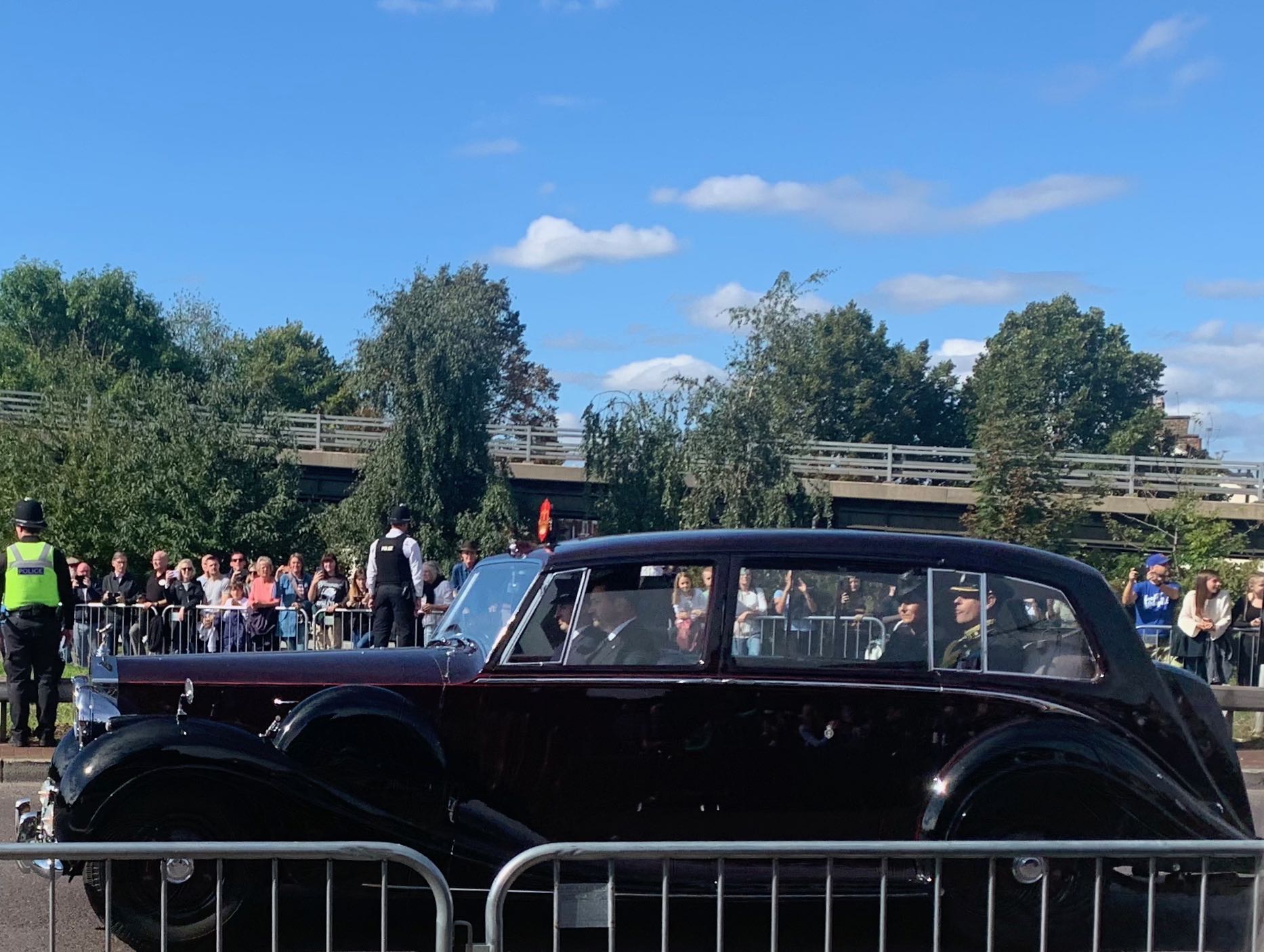 We certainly do pomp extremely well and from my television screen it looked like immaculate perfection, effortless and timeless, with exquisite choreography – although I can only begin to imagine the amount of work that went into getting it all so right.  The number of policemen required, snipers in buildings ((I’m assuming), the SAS on standby and who knows what those loud barking military orders meant, but they certainly worked.

Our national day of mourning and remembrance following ten days of national mourning was the most traditional, proud, stately, moving, wonderful thing I have ever had the privilege of witnessing.  “The Elizabeth Line” which stretched for miles and miles and took hours and hours of standing to get to see her was a spectacle in itself and said much about the love her people had for her.

I met The Queen once.  She shook my hand.  I was in Hong Kong and it must have been around 1975 when she came on tour.  I’ve got a photo somewhere. I must try and find it and add it later! 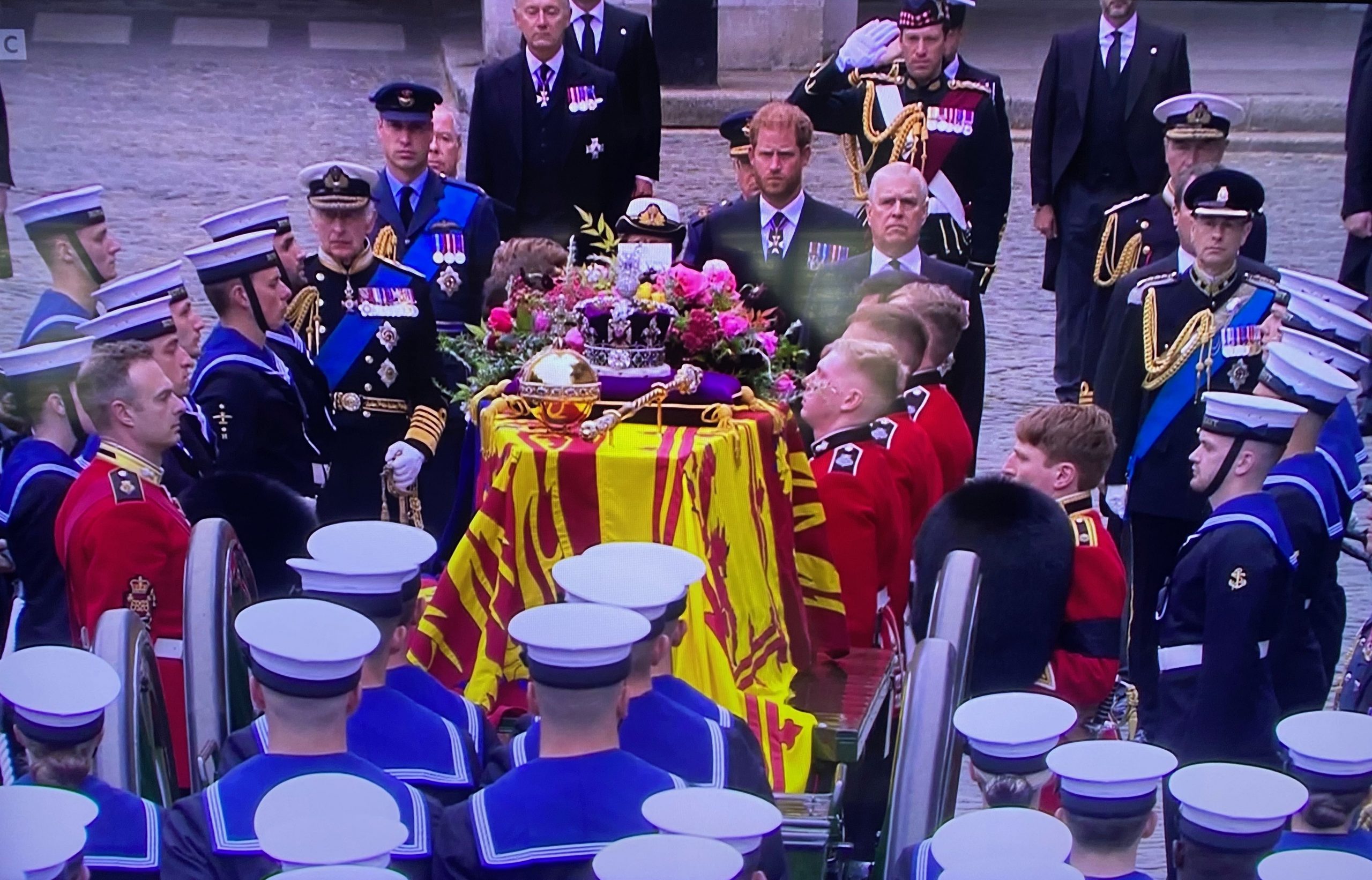 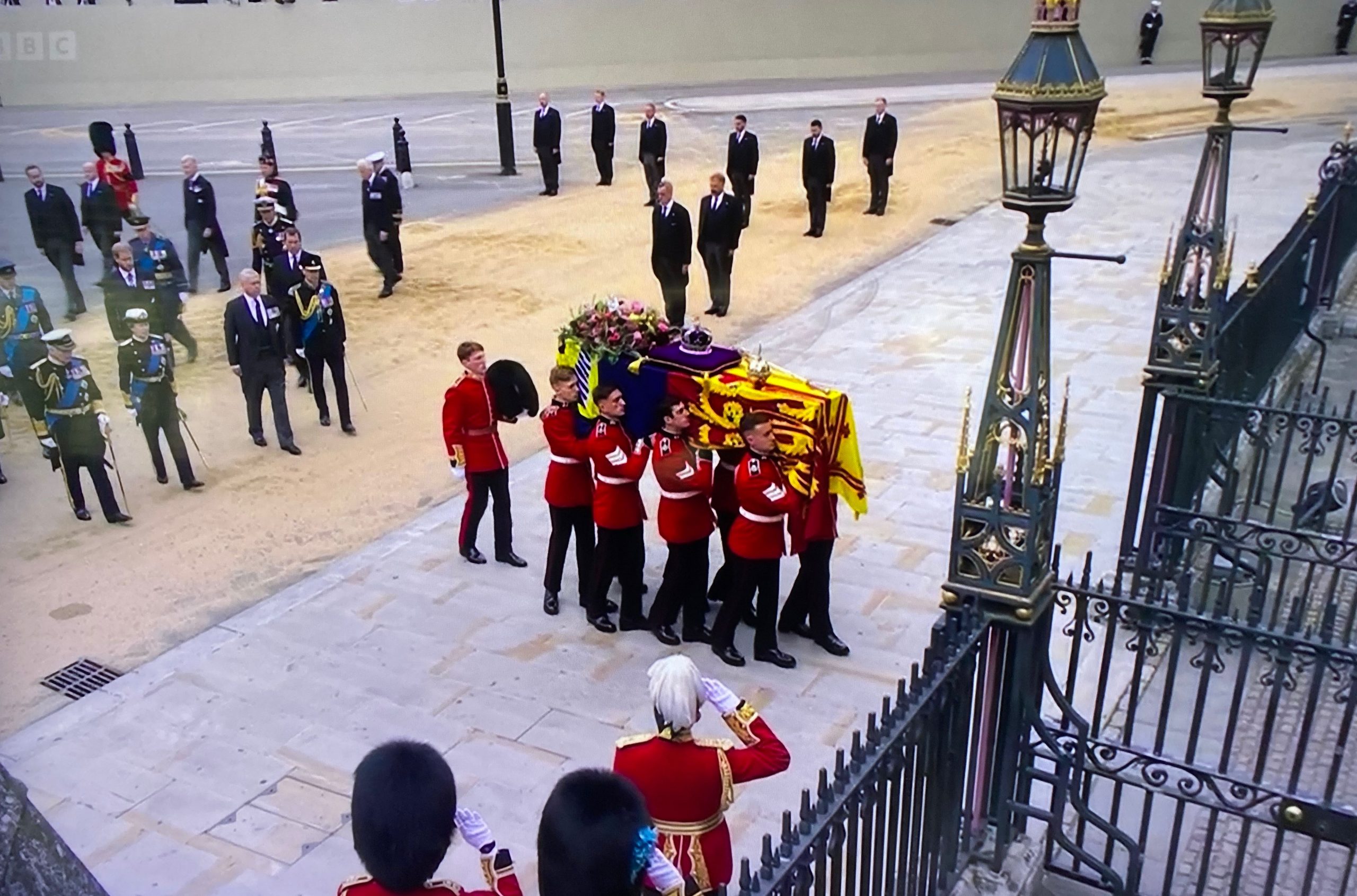 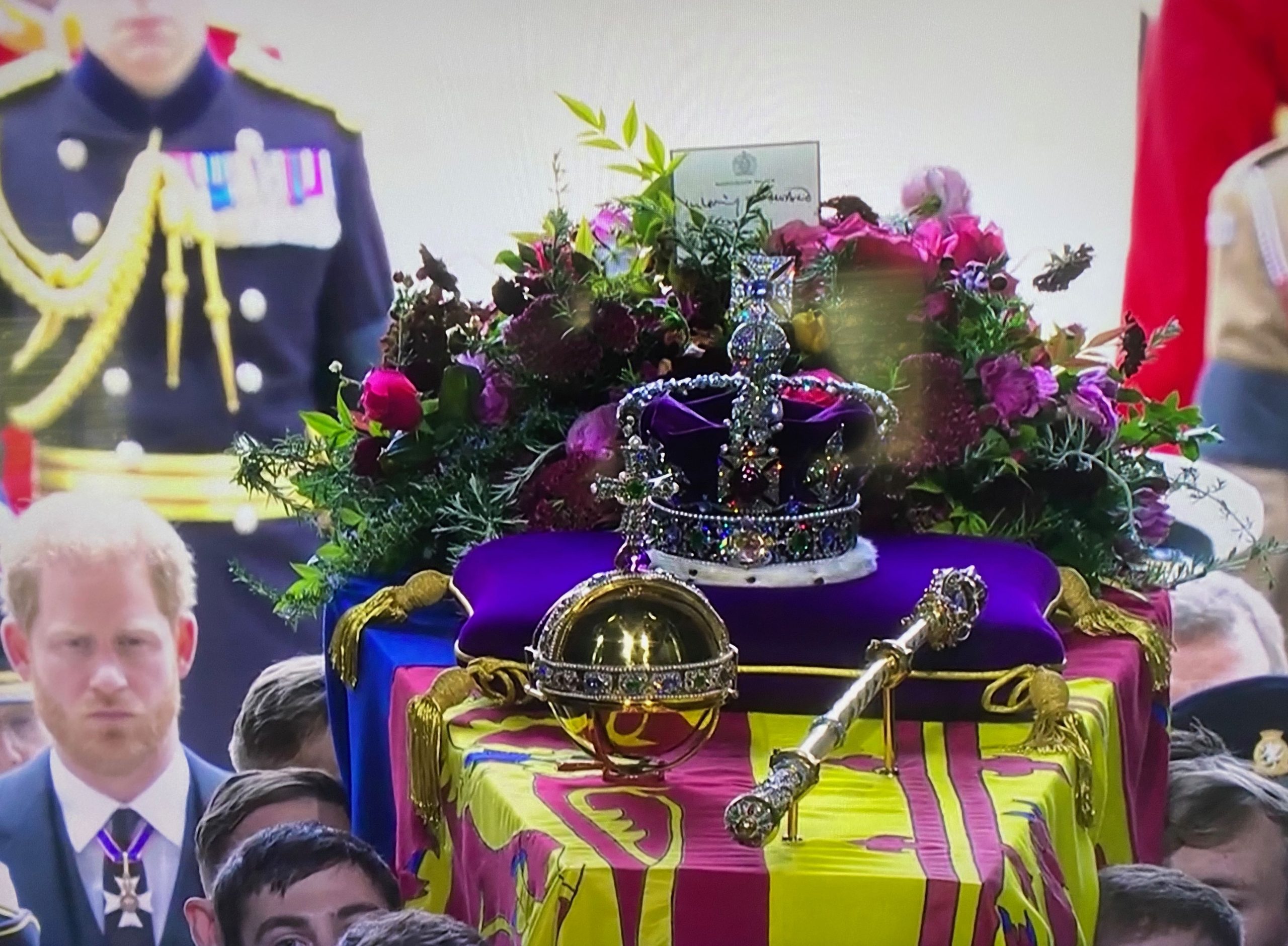 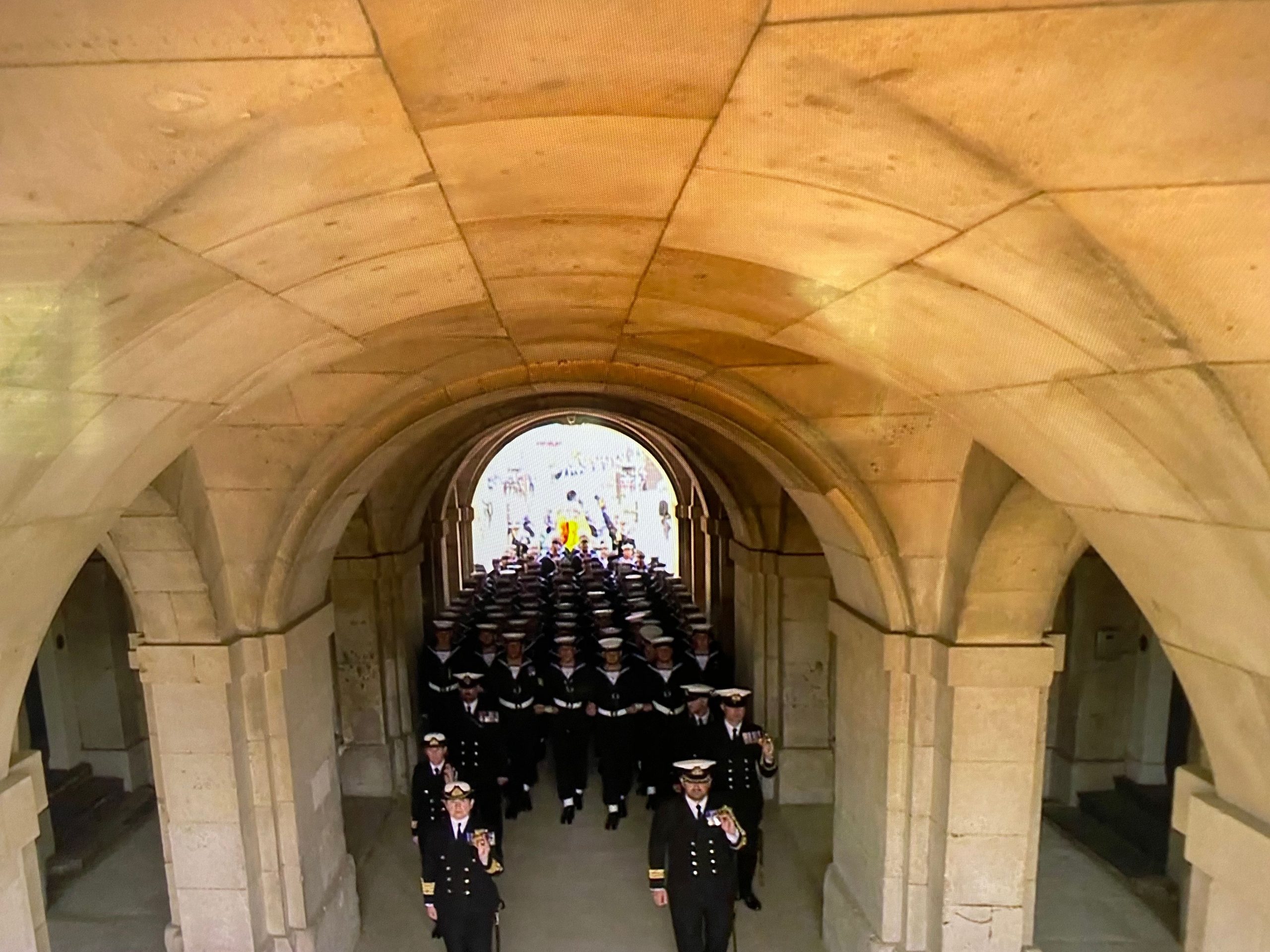 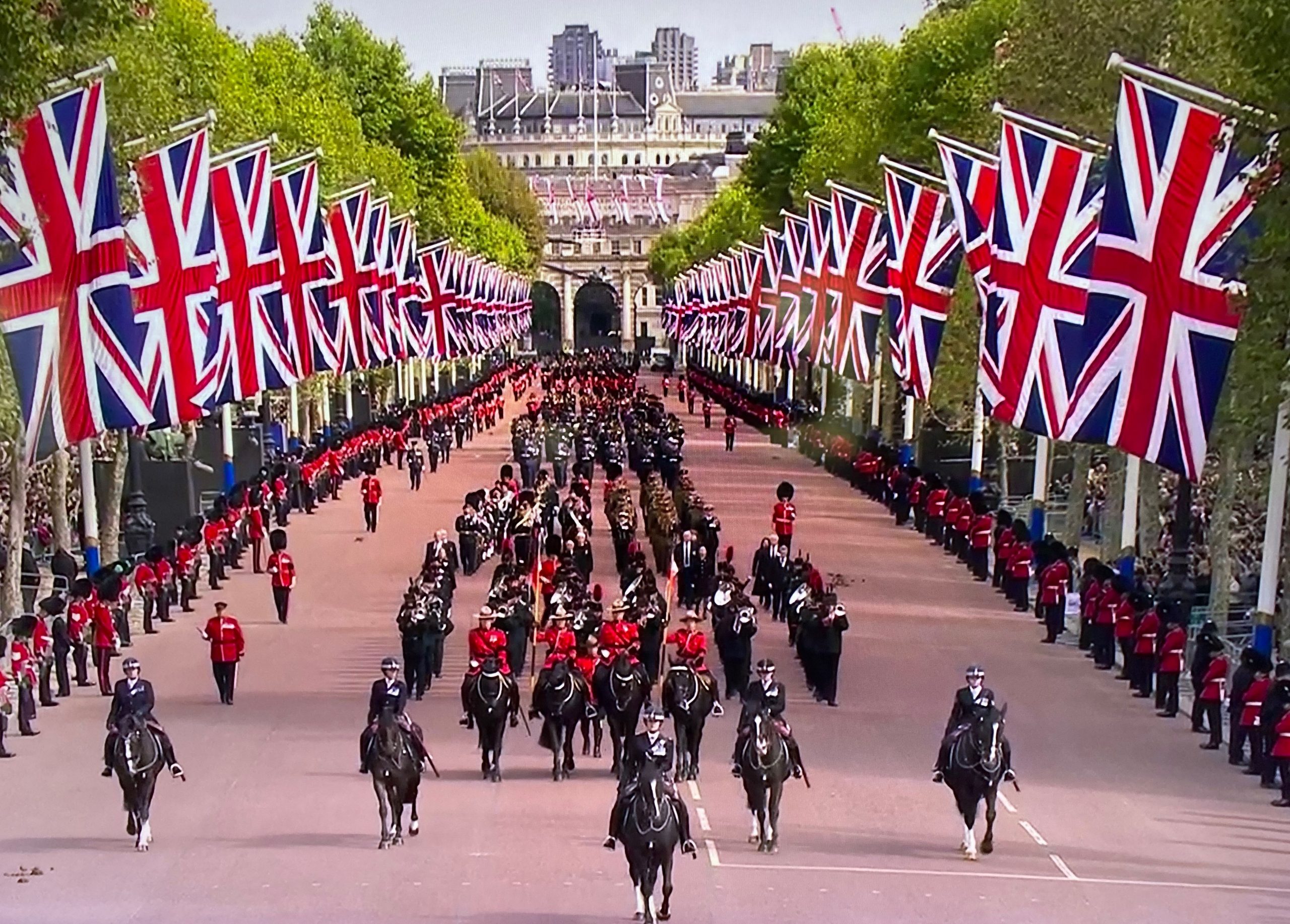 And for the icing on the cake, what a wonderful rainbow over London this evening:- 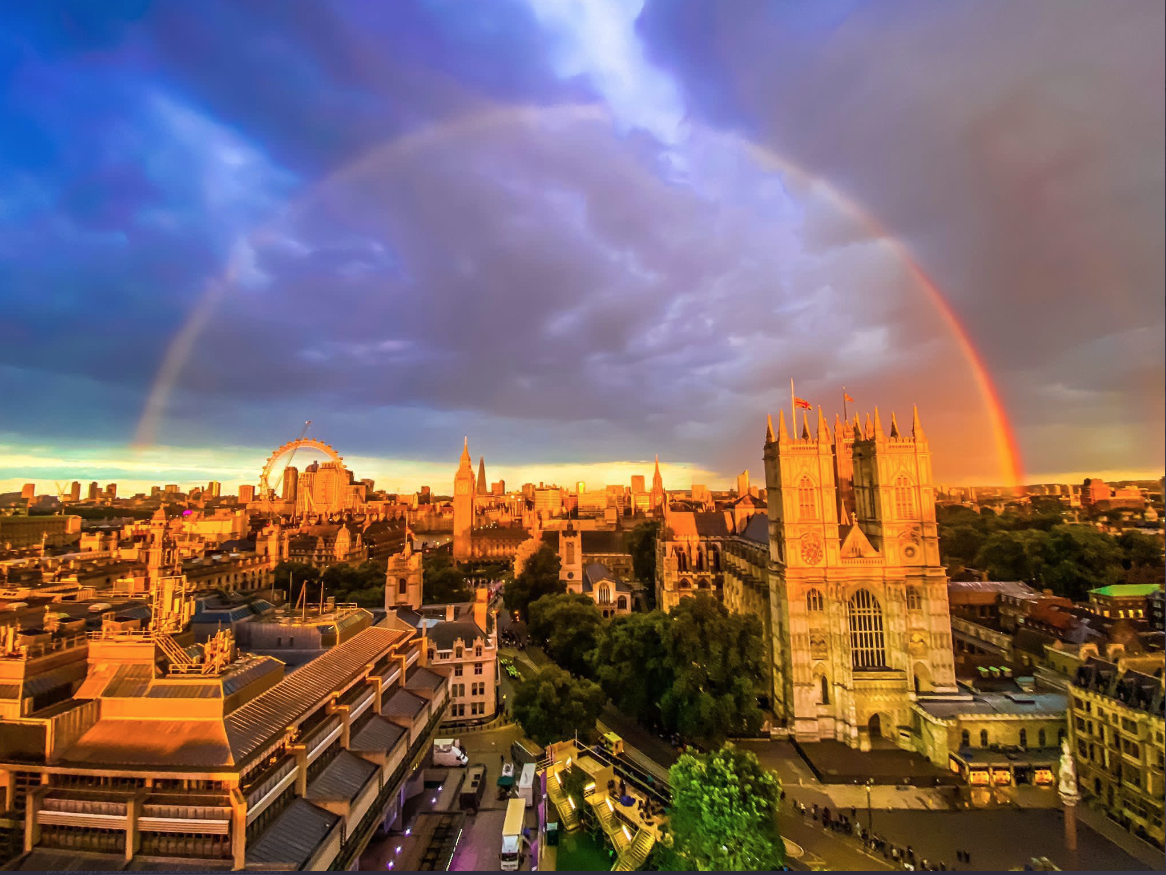 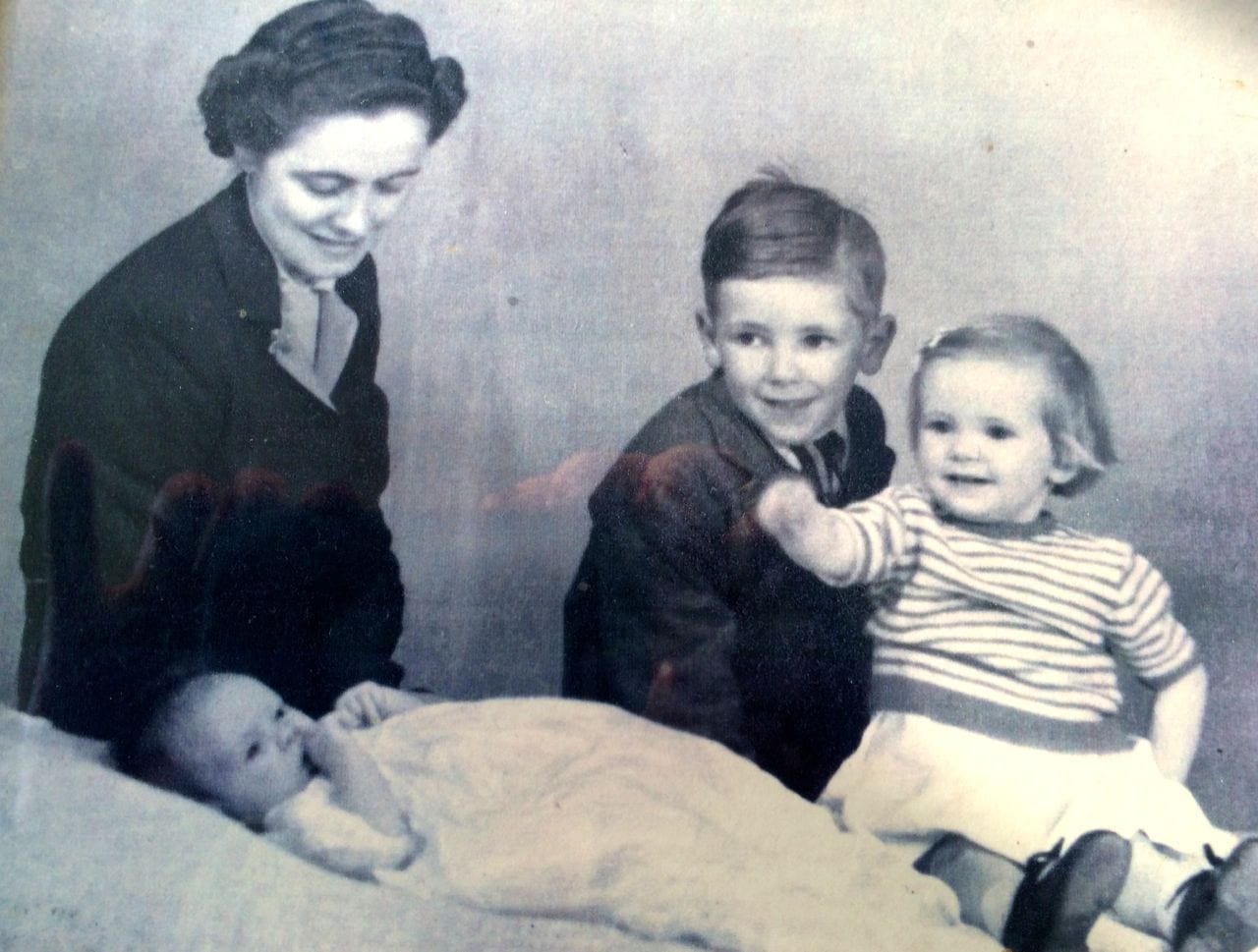