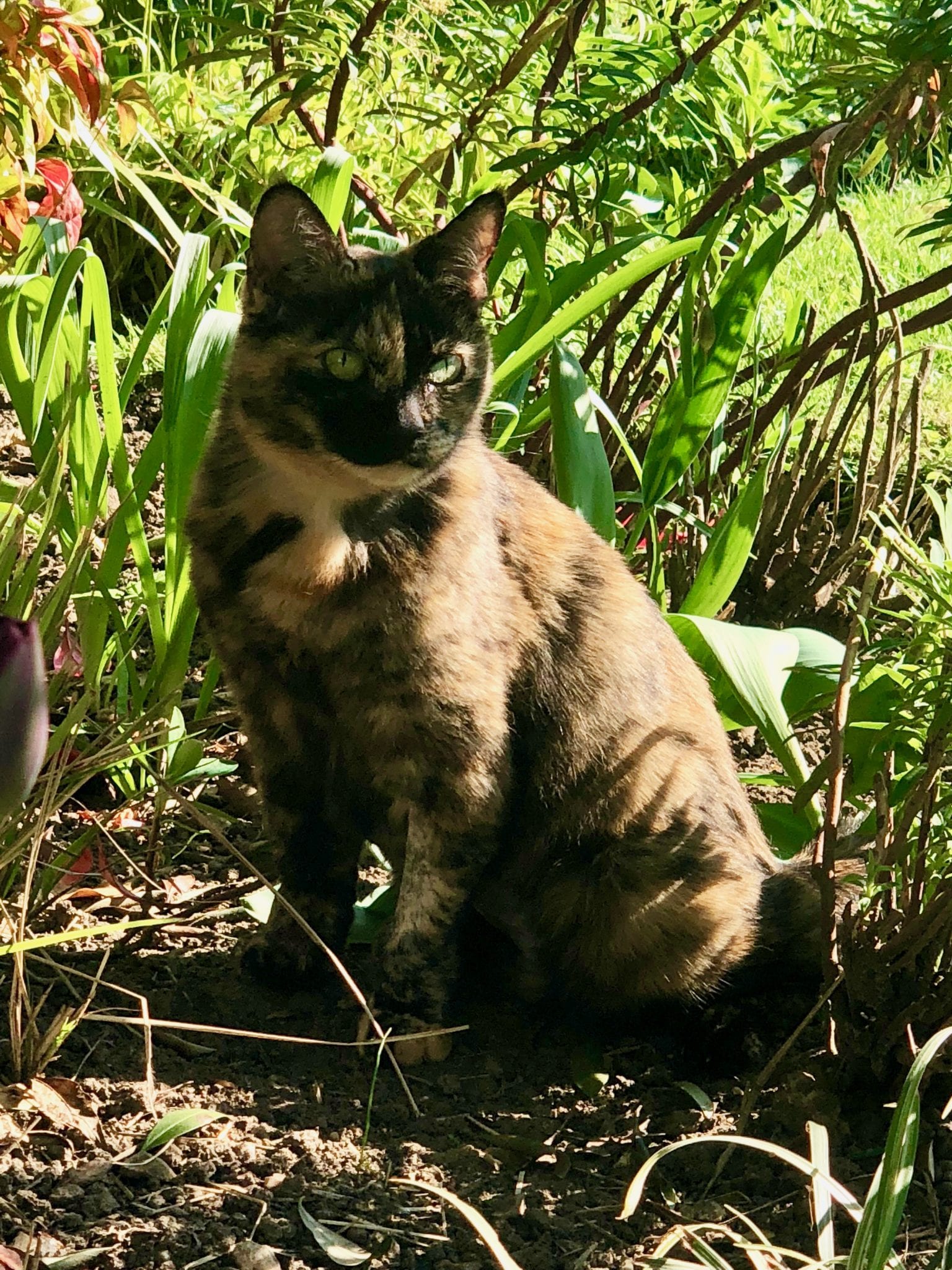 I’ve just had to have one of our cat’s put down and it’s been a massive trauma for us all. She has been our much loved family cat for over 15 years, surviving a car accident and several house moves. With us through all the ups and downs of the divorce years and a constant in the house who has helped the children hugely. 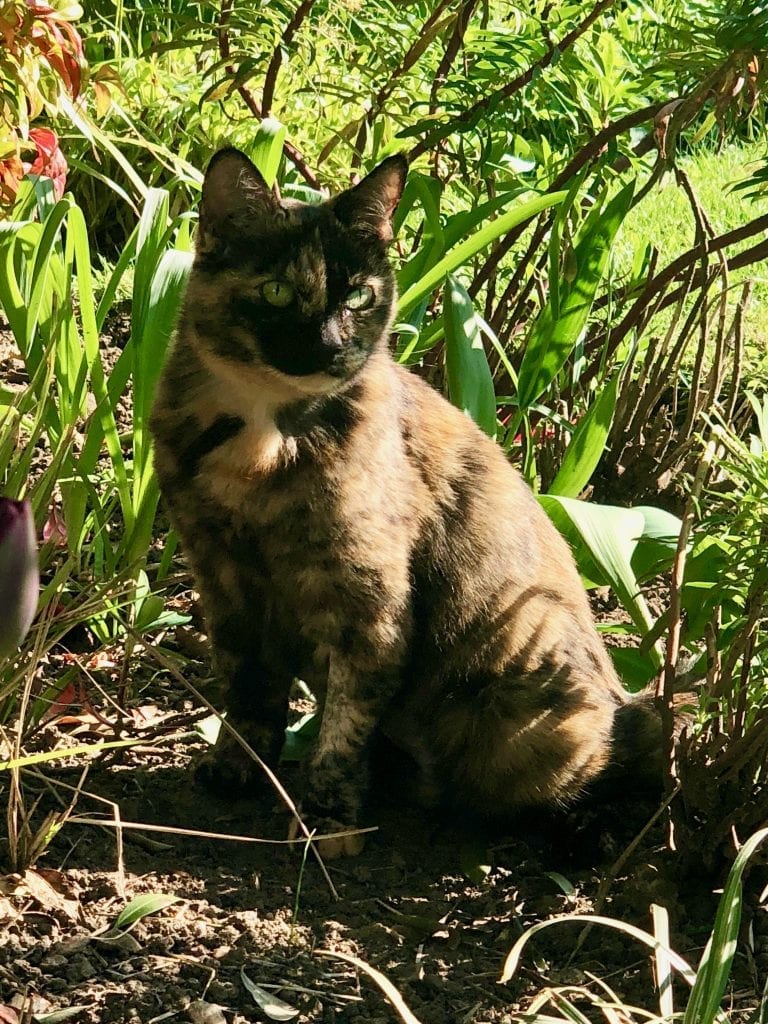 I have never had to actually drive an animal to the vets knowing full well that she wouldn’t be coming back home. I felt like the grim reaper. She’d been very ill and recently diagnosed with cancer and after a procedure she had to test the lymph nodes for whatever reason (“this is very rare and I’ve only seen it once in 7 years” said the vets which didn’t really help) she lost the use of her back legs in the process which was devastating. We kept her at home in the sunshine for another ten days but it became apparent that her bodily functions had also been affected and she was getting very weak. Of course the children just wanted me to keep her alive no matter what so I finally had to make that grown up parenting decision that goes against the wishes of your children for the sake of what was best for her. I honestly felt terrible, but the vet said she was very ill and it was time for her to go. I left the vets in tears with an empty cat box, got home, texted the children the news and got this from my first born which was a great help as you can imagine:- 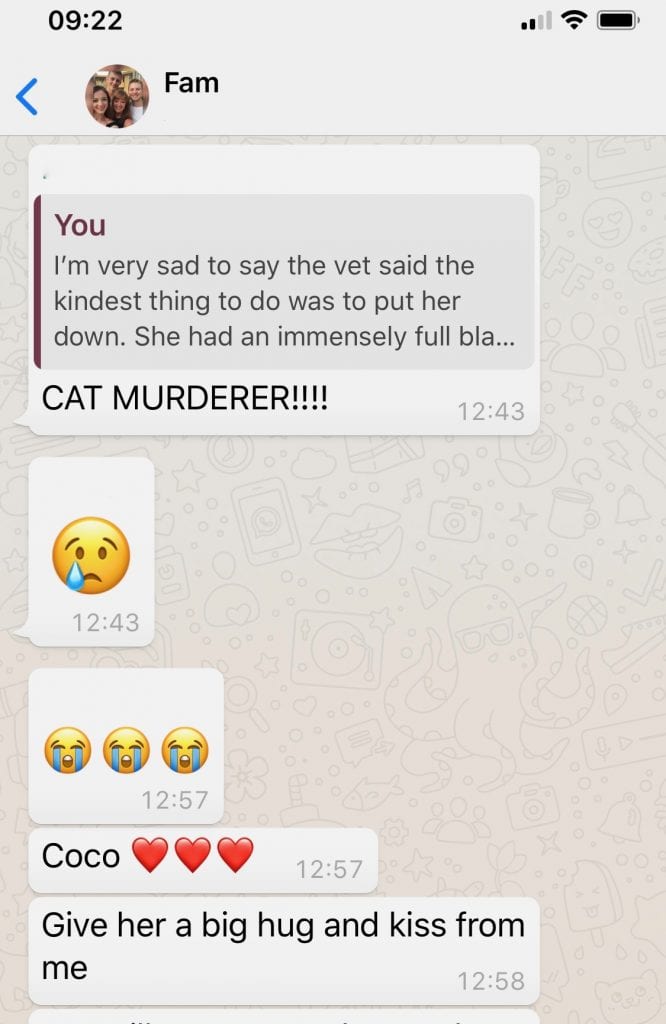 Everyone always says it’s the death of a pet that is so very hard to deal with for children, but that its a good life lesson for them to learn about life and death and shouldn’t deter you from having animals. They would all have loved a dog, but it would have been too much for me to cope with, so we’ve stuck mostly with cats – they’re a lot easier being so independent and don’t need walking.

Over the years of bringing up children, this is the list of pets that we have owned:-

A good place to start. They don’t make any noise and barely need feeding and the picture on the packet makes you think they all swan around wearing crowns (well I believed that back in the day). Be prepared for unexpected childhood misery though when your child’s friend spills them all over the floor and it takes them weeks to recover (the child that is, the Sea Monkeys all died). My son was so upset that as a housewarming present when he moved out aged 24, my daughter bought him some more!

Not a bad option either. Quiet. Not very stroke-able though or very interesting. Mainly you spend your time thinking (hopeing?) they’ve escaped because you can’t see them.

Those Ant hill kits are good for a rainy day as you have to set it all up with sand in a glass box. We had several of these as they are a birthday present favourite, but I don’t recall them being successful. They rarely work as you generally can’t see the ants and consequently they don’t last long. Boring too.

Not bad. They bite though and disappear under sofa’s. Our hamster was inadvertently named Nora and then she gnawed her way through all our curtains.

Tried these in a desperate attempt to move away from the fur. Very easy, but equally boring. Seem to recall we had a moment with tropical fish too which was a disaster as they end up being very expensive. The children spend their own pocket money on a Nemo like fish and then it gets eaten by boring brown one that looked fairly unassuming and the children are once again traumatised. They go mouldy as well and take days to die lying on one side. It’s awful. Then your mother arrives to stay and makes you flush them down the loo (the dead ones obviously) rather than keep holding little funerals for them in the garden with matchboxes and tissue paper.

We’ve had three cats. Two siblings who arrived over 10 years ago when the children were having to deal with the fallout of our marriage in a little box with bows around their necks and they were much loved. One of them dropped dead about five years ago causing much upset all round and he was replaced as a surprise Christmas present by another ginger kitten who is a joy to us all. Although ginger cats have not been ideal when wearing black clothes. If you like wearing black, think about a black cat! Now we only have one left….I must remember to mention to the children that I DO NOT NEED THEM TO REPLACE HER WITH ANOTHER ONE! Despite being relatively easy, you still have to feed and water them every day so going away needs some organisation. Also when you’re children leave home and you only have the cats left you are in danger of turning into smelly mad cat woman whereby people start avoiding you in the street.

I only had dogs as a child and then got chased by a random one on my way home from school and became marginally terrified of them ever since. All my friends have dogs and love them but they do all moan about the amount of walking and washing them they have to do. So I have resisted, because as a single parent, I couldn’t face the amount of additional work they would add to my life and have had to be very, very firm on that point. Only get a dog if you are prepared to do all the work. The children love it obviously and promise to help and walk it every day before school but of course that only ever lasts a few hours.

RIP our lovely Coco and I’m sorry for being a cat murderer (although my son was only joking! – ha ha, not funny). 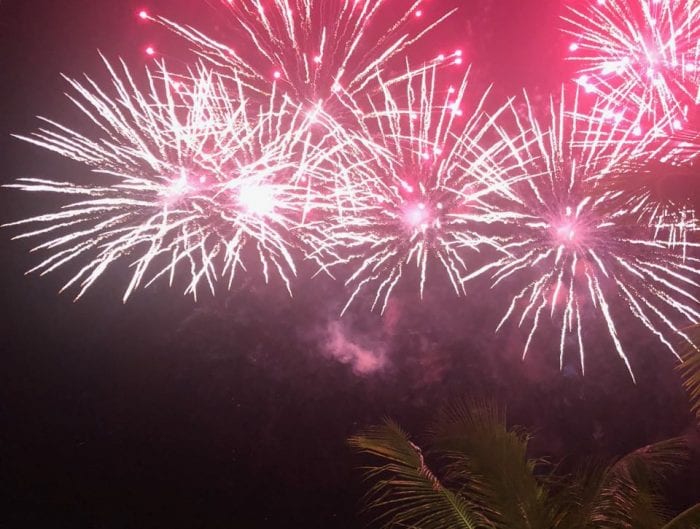 SHOULD FIREWORKS BE BANNED?
November 7, 2019