ARGHGHGHGHGHHGHG. One of those mornings.

My daughter’s first written GCSE exam today and for some reason I barely slept. I’m so nervous for her which is ridiculous because this morning she seems fine. I even had a dream about trying to dream in French and then relaying the story to the examiner – I don’t even speak French – consequently dreaming about dreaming in French was a bit of a nightmare.

THEN, having washed all the school uniform overnight, I discovered at 6.30am that a rogue pen got washed with all the kit. Every single thing is covered in brown ink stains. I think it might be permanent. Even the washing machine drum is covered in it still. I washed three of my son’s shirts at the same time so now I’ve had to send him in to school like that with the jumper on top (also stained but dark blue at least) and I’m probably going to have to go and buy some more. Very cross. WHOSE fault is it when that happens? I DID CHECK POCKETS! Mine for not being more vigilant or my children’s for not emptying pockets?

Or maybe nobody has to take the blame because it doesn’t really matter whose fault it is – it is what it is as they say…and now I”m going to bore you with what it all looks like – how am i supposed to get the ink out?? 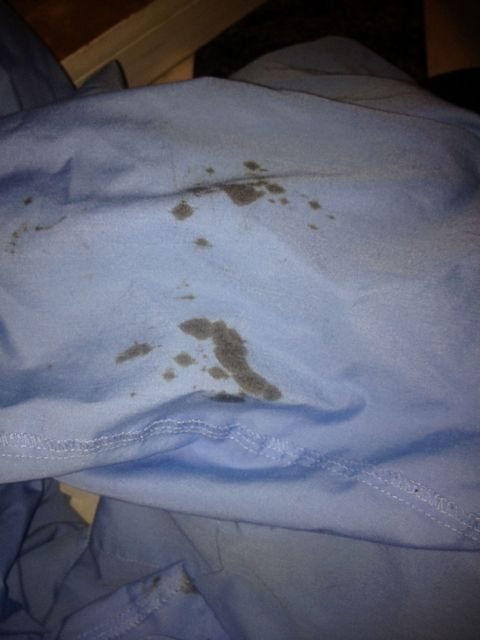 I’m not sure how my daughter is going to wear her shirt – I might have to whizz off and buy another one just to avoid her stressing about it in advance of her exam. Took my youngest son to school and then I had to take my kitten to the vet for his “chip and chop” operation. Castration and a microchip. Ouch. I am keeping everything crossed that he will be absolutely fine – I know the timing isn’t great but he so needs to go outside now and although I’d rather not do it during exam time I’m sure it will all be fine. Poor little thing though. I hated leaving him there.

PS: You see how boring I can be when I’m declining invitations to go anywhere because I’m being a PROPER mother, STAYING AT HOME and washing clothes et al???

Hi! I work with the Brilliance in Blogging Awards and I just wanted to say… well done on being voted as a finalist!!! The finalists are listed here:
http://www.britmumsblog.com/bib-awards/2012-bibs-finalists/

Feel free to email me for more information 🙂

Oooh – how exciting – thank you so much! Lx