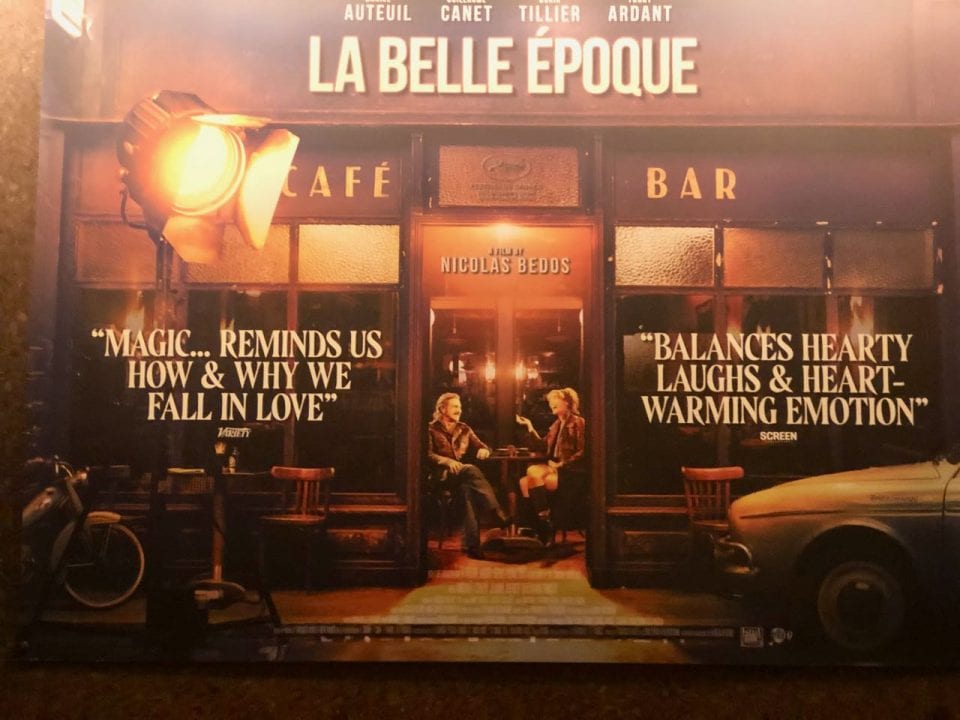 “La Belle Époque” is one of the best films I have seen this year. It’s funny, sexy and original. A joy to behold in fact. The opening scene is a bit out there in every way possible and you are thrown into the feeling that you’ve wandered into the wrong movie, but all becomes clear along the way. I suspect it was the best way to show the controlling nature of the “Director” played by the extremely beautiful Guillaume Canet.

This is only the second film directed by Nicolas Bedos and he’s done a great job – using all his fabulously cool show-biz friends and interestingly, the beautiful Doria Tillier who plays the young Marianne was formerly his partner last year (now ex apparemment)…when the film was being made, so wondering whether this was life imitating art, imitating life, imitating art….you’ll see what I mean once you’ve watched it.

The Guardian gave it a bad review; “madly over-egged, over-sugared pudding of a film, not funny enough to count as comedy and not plausible enough to count as drama.” I completely disagree. Sadly the reviewer missed the joy of the small details in amongst the bigger story – the smile, the look in the eyes, the touch of the hands. To me it was just a lovely feel good factor film that I defy anyone over 50 who has been in a long partnership not to enjoy.

The Beautiful Time (translation of the title, in case you’re not learning French like I am) chosen by the somewhat hapless hero Victor (played by the wonderful Daniel Auteil) when he is given the opportunity to go back in time is 1974 – big collars, flares and moustaches, to the moment in a bar where he first met his future wife who he believes he owes everything to. He is now a man in his 60’s whose marriage is on the rocks and has lost his job as a cartoonist for a major newspaper, so quite understandably he’s lost his joie de vivre. His wife, Marianne (played by the beautiful Fanny Ardant), on the other hand is a psychotherapist who has grown to dislike everything about her luddite like husband, attempting to grab youth with both hands, but losing her anchors in the process.

It’s funny and frivolous in parts, but essentially an emotional rollercoaster with a strong and yet simple message at it’s core; let’s cut through the crap and go back to the beginning, in order to remind ourselves how and why we fell in love in the first place. The film essentially looks at how to make love and marriage work in the longer term. Maybe if more of us were given that opportunity less marriages would break up. The cast is very strong and there are lots of laugh out loud moments.

Victor gets the opportunity to go back in time thanks to his son’s best friend who runs an incredibly successful immersive theatre company (that bit is quite complicated to follow, but don’t worry all is revealed along the way). As a result, Victor’s creative juices start flowing again and he embarks on a new (old) life changing adventure. There is a parallel story running alongside involving “the director” who by intermingling the technology of the future with the reimagining of the past, plays “God” in a role that has it’s own issues to say the least.

It is cool French chic at it’s best. Slightly mad with the classic French element of chats on the loo, oral sex (and it’s a 15!) lots and lots of shagging….but wonderful for that very reason and incredibly uplifting.

It will make you laugh and cry.

Let me know what you think.