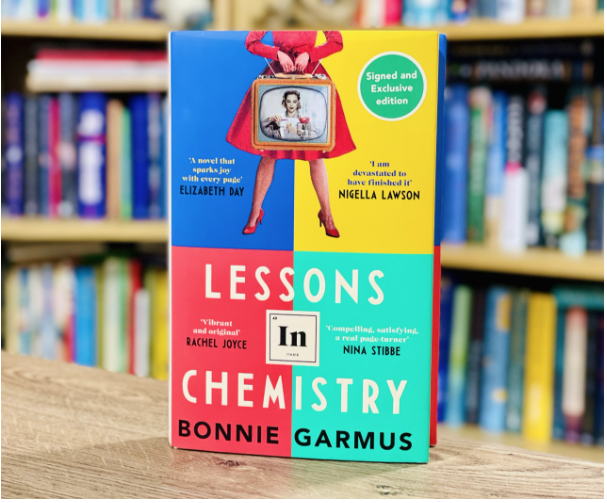 We’ve just finished reading “Lessons In Chemistry” by Bonnie Garmus for our book group and it was a delight.  An easy, joyful, visual read, with dark undertones and lots of issues.  Bonnie is a debut author (in her 60’s) who found her “Lessons In Chemistry” sweeping to the number one spot on the Sunday Times bestseller list earlier this year after a 16 way auction and a TV deal with Apple.  Every author’s dream.

We also went to see her in conversation with Ben Hunt-Davis, a former British competition rower and gold medallist at the 2000 summer Olympics recently and she talked about how her first novel had been rejected by 98 agents – so there’s hope for us all!  She told us she was going for 100, “but my husband said that was not a good number to have, so I stopped at 98.”  She’s described this year, amongst the successful feeding frenzy, as her “year of astonishment” – the book has been translated into 35 different languages – they’ve even sold rights in Arabic – where I would think she could indeed quietly and stealthily start changing the views of nations. 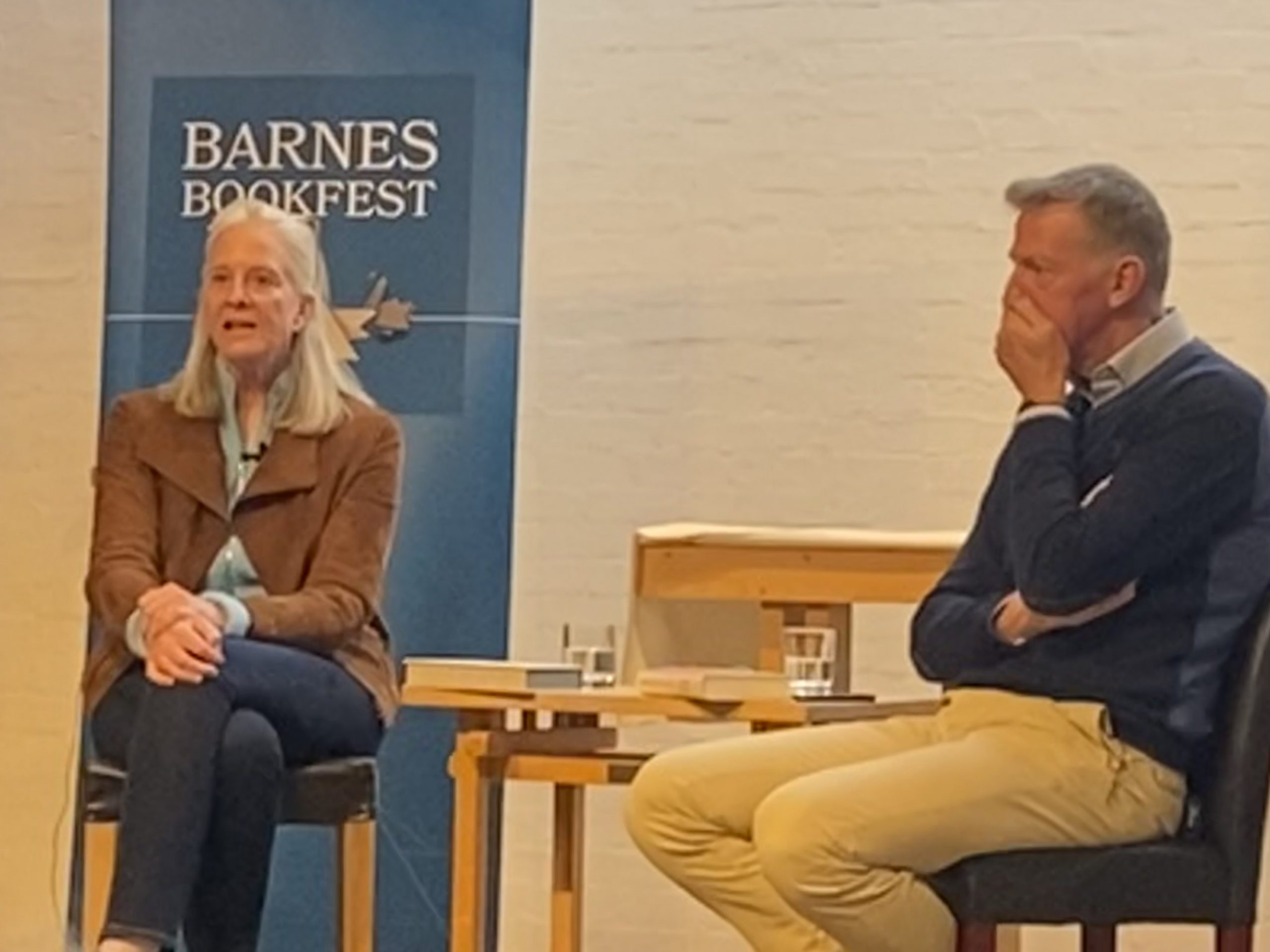 Bonnie talks like she writes – with humour interlaced throughout her conversations and with great comic timing.  Her story focuses on “the average housewife” and is set in 1961, California – her main protagonist is a beautiful, unusual, tenacious, quirky, brilliant woman called Elizabeth Zott who simply won’t accept the status quo and refuses to be treated like a second class citizen.  She follows her own path by refusing to “dumb herself down for society’s convenience” and in so doing is presented a lot of tragedy and sexual violence.  She has an unusually high need to use common sense, for scientific methods and real answers, given her parents were religious charlatans.  Betty Friedman’s iconic “The Feminine Mystique” was a huge influence in helping her research the book and that’s what we’re reading next for book group!

There also contains a multitude of fascinating characters who you either love or hate.  She has an extraordinary, shy, observer of a daughter called “Mad” (Madeline) who is too tall and too clever for school and her teacher, but her mother refuses to underestimate her child and she is encouraged to explore her own interests and grow in ways other children cannot.  And then there’s “Six Thirty,” a dog who has more empathy and strength of character than most of the humans in the book.  She told us the dog was based on her own much loved pet, “Friday,” who genuinely understood what they were saying and learnt a lot of words – “probably the ugliest dog you’ve ever seen with a body odour problem we thought would go away on his first bath, but it didn’t.  Nevertheless, he was absolutely brilliant – a combination of Einstein and Gandhi, picking up on our language.  When we moved to Switzerland, he learnt German.”

Bonnie, an American, lives in London with her husband (who was in the audience and she referred to him quite a lot as being her main critic and supporter) and her two “kick ass” children.  Rowing was a significant part of the story, so it wasn’t surprising to hear that Bonnie is a rower with the callouses to show for it.  The story is based around Elizabeth Zott who is a female chemist (specialising in Abiogenesis), trying to find her way in a man’s world.  She’s a defiant person that ends up on a new national cookery show “teaching chemistry to a nation of overlooked housewives in which she changes a nation – that’s why it’s fiction,” she says.  She bases all her decisions on logic and rationale and is extremely straight talking.  It’s message is to be braver, to not be afraid and to refuse to settle.

The book, she told us was started when she was in a really bad mood.  She’d been in a meeting whereby she’d been talked over and her idea was stolen by a man in the room – “it was constructive anger, because I went back to my office and wrote the first chapter on their dime.  I also wrote the last three lines of the book at the same time.”  She wanted to focus on her mother’s generation – all those women who felt invisible, who had to take their husbands name, look after the kids, do all the cooking, the cleaning and the look after the home in general – “I really didn’t see my mother as a human being with ambitions, it was very humbling actually”.

It’s a book that appeals to a wide audience – easy to read and imaginative.  She told us that one boy, who had it on his school reading list wrote to her to say he’d enjoyed it “more than Lord Of The Flies” so she suggested that all young boys should have at least two copies by their bedside.  It’s because it has so many key themes that are still relevant today:- religious zealotry, systematic racism, misogyny, sexual violence and as Elizabeth Zott often cites;-“as human beings we are 99.9% the same,” everything else are merely cultural constructs, used to control people – some in charge and others under their thumbs.

Her writing process is unusual – she says she just lets the characters walk on, she can hear their voice and then she puts them into tense situations. Six Thirty, the dog was given a powerful voice in the book – a difficult way to add the anthropological element to the story, but it really works.  She told us it’s much more freeing to make the characters up, despite lots of them being based on people she knows.  She did have a work situation where she campaigned for women to be paid the same salary as men doing the same job only to be told that “one day he will have a family he needs to support.” She told us that if she could change anything about the workplace, she would liken it to rowing – teamwork is required.  There are a lot of personalities involved in a company, but if you want to work well together you have to think about everyone else.  Rowing is also a metaphor for balance and when you have imbalance, either in the boat, or in the workplace or in society in general, then it spells failure and the result is havoc.”  She believes that if science was used more in real life we’d be making better, more informed decisions based on discovery and fact, with co-operation and better communication.  This point is another reason why I think the book has been perfectly timed – put in the hands of our young men and women post Covid who are all looking at the role of scientists with awe.

There is sexual violence in the book which she says she felt compelled to add because 1 in 6 women in the USA will be raped or sexually assaulted in their lifetime and her best friend is a rape nurse.  She told us she turned up to meet her after work one day and she hadn’t finished – in the waiting room were a number of women ranging in age from 12 to 80 and yet still most women don’t report their attacks.  She told us she wanted Elizabeth Zott to have endured an attack like that, but to not let it define her.  A woman that knew who she was and didn’t have to look in the mirror all the time.

There’s a lot of humour in the book “that has to be balanced with darkness to work” but it is also about love.  All her characters are uniquely drawn – especially the man Elizabeth falls in love with (owing to chemistry), Calvin.  When they fall in love, it’s a chemical reaction based on hormones which results in a cerebral, curious, respectful union and it’s glorious.

So, a highly recommended read!