Honestly, in the few moments that I could tear myself away from the incredible light and sound show that lit up the sky over Cinderella’s Castle the sense of wonder and awe on the faces of the children was a sight to behold. I now have something else to blame my parents for. Not being given the opportunity to wish upon a star and believe that all my dreams can come true if I just truly believe – I mean honestly by the end of the show there were grown women crying. My friend sent a text to our children saying:

“Firework selfies at Cinderella’s castle – does it actually get any better?” and the funny thing was when we were killing ourselves laughing over the photo the next morning because it looks more like we have little puffs of smoke coming out of our head having managed to set our hair alight was that she really meant it at the time…. 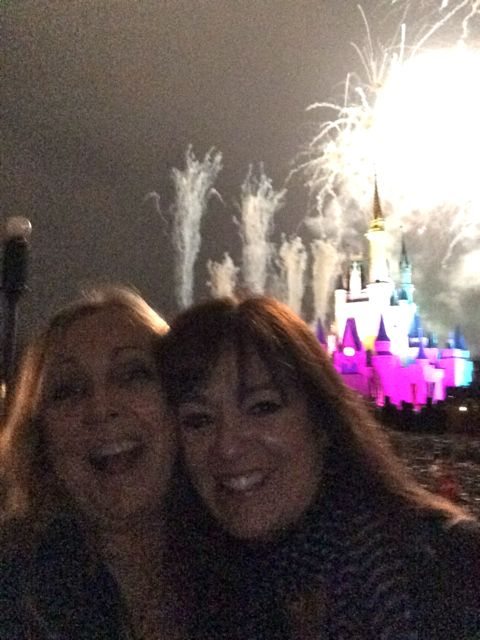 This is the fairytale dreams-really-can-come-true centre of the universe for children where you can see all the classic attractions and Disney characters across a vast amount of land. Not only that, but you can go on rides. Not something I do as a matter of course – in fact I’m not going to lie, but enormous rollercoasters are to be totally avoided, because they fill me with absolute horror. But now that I am here, at the ripe old age of …. (very old) something strange has happened. I appear to be reverting back to my childhood with an entirely different attitude. One that is, perhaps a little braver than before.

Take Big Thunder Mountain for example. No way was I going on that until my friend suggested I should at least have a go. So I did and really it was incredibly exhilerating and I wanted to do it again. Terrifying, but thrilling at the same time and I felt a huge sense of achievement in having overcome a childhood fear.

The thing is, that of course my children should be here with me – I’m definitely going to bring them – you’re never too old for this. I have been testing the water – looking at all the different age children and there are very few who look “too cool” to enjoy it. OK, I guess the majority are American and perhaps we have a little further to go to persuade the British teenager to buy in to the magic, but I think it can (and should) be done and if the light show isn’t enough then wait till I tell them about the speedboats they can drive. But, in the unlikely event that the kids don’t want to come with you? You could consider joining the third of Disney fans who frequent the parks without children. 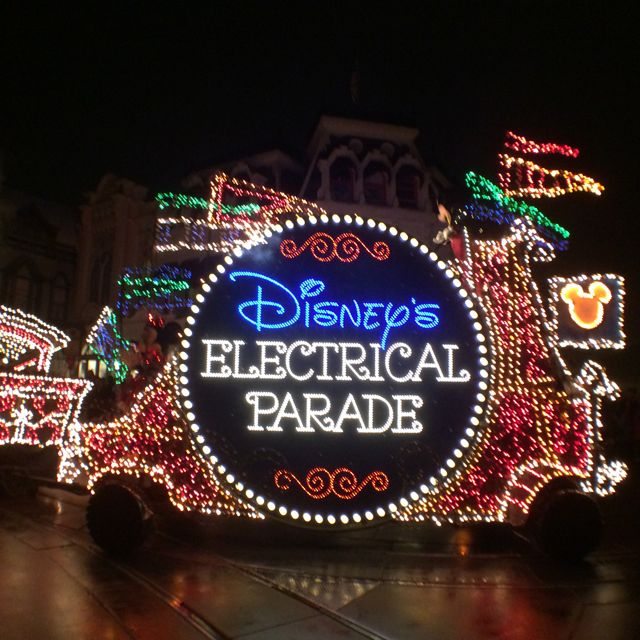 Here is Tinkerbell in the light show:- 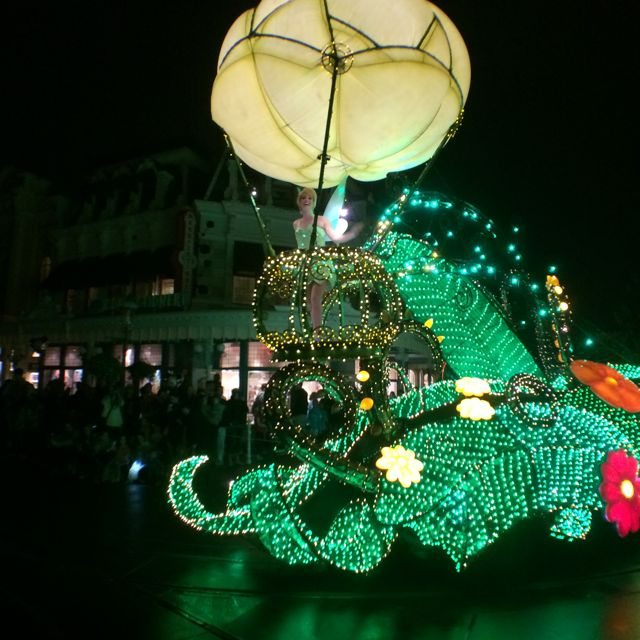 Good old Captain Hook and all the while children are waving and whooping at all the characters:- 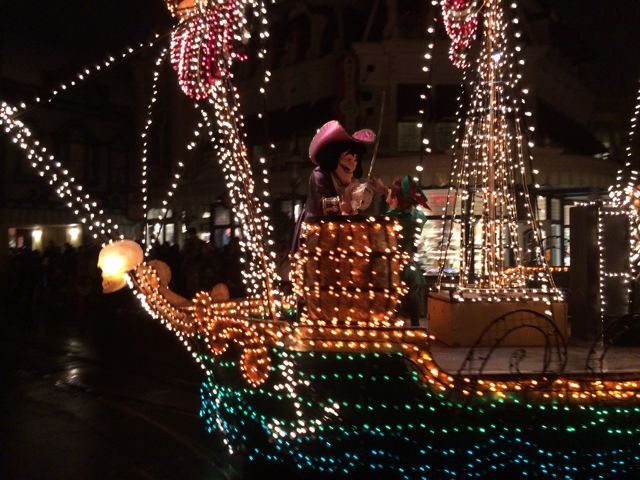 Us at the electrical show:- 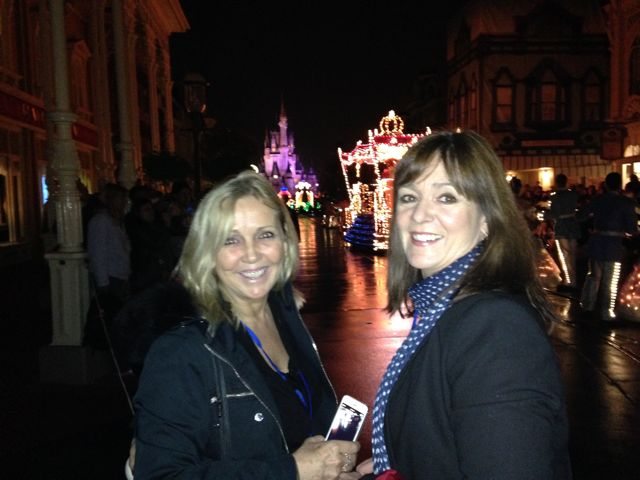 The much loved nighttime projection and firework show at Cinderella’s Castle:- 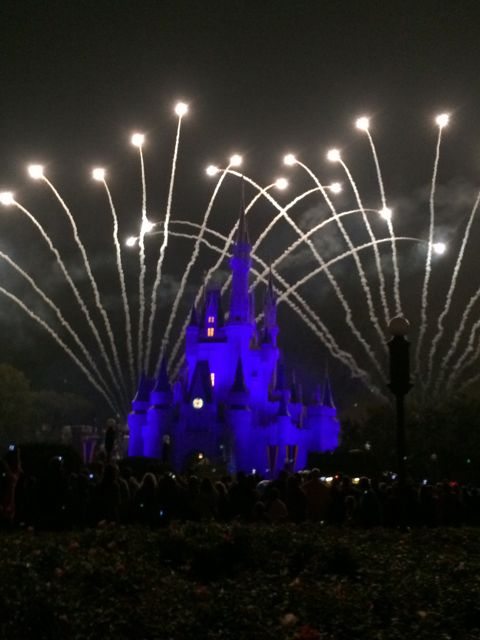 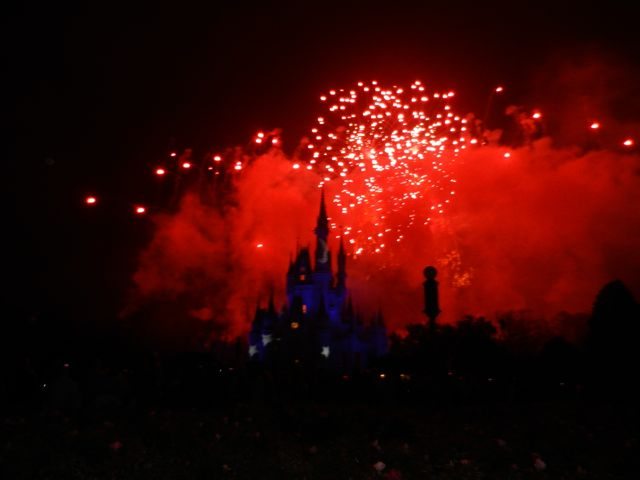 After our display we ate at the Liberty Tree Tavern – extremely good restaurant for families – they just place a feast on your table of beef, pork and chicken, with macaroni cheese, sweet potatoes, green beans and all you can drink (non alcoholic) beverages (note that there is only one place you can drink alcohol in the Magic Kingdom).

Back at the hotel and we found these lovely little chaps in our room – how cute are they? Chocolate covered tuxedo strawberries:- 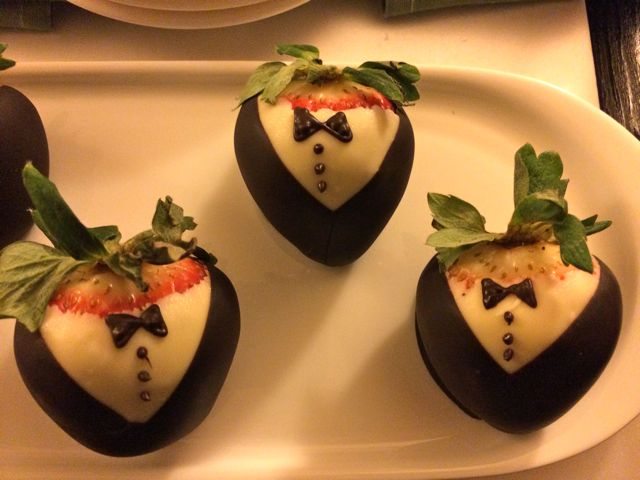