I have to say that the Mirena coil has been the perfect solution for me over the last few years. I initially had one put in straight after having my second child, but hated it and it was taken out again. However, during my divorce when I was so stressed I appeared to be constantly bleeding this was the perfect solution. No more periods. Hooray.

But, somehow five years has gone by and it had to be changed. I did one of those book WAY in advance doctor’s appointments that was never going to actually materialise. Until it actually really did, yesterday, after my Africa trip.

It was never going to be pleasant. I hate things like that though. Smears are bad enough. My friend went with her friend to get their coils changed together recently – mainly because one of them was so scared she didn’t want to go on her own. But the doctor couldn’t do it because she was so scared. She’s going to have to have a general anaesthetic to get it out.

With that news in my head I arrived bright and early at the doctor’s surgery yesterday. A lovely, competent female doctor who does them all the time. I tried my hardest to get out of it. Told her I might have germs having just come back from Africa – maybe even spiders under my skin. Told her I was a very difficult case and what a nightmare it was last time and that perhaps I should have it done at the hospital. She wasn’t having any of it. Told me it would be fine and that we should have a go anyway and she was right. Sort of. It’s such an indignity isn’t it. Having to lie like that for a period of time. Then I had to cough as she pulled the old one out and then breathe deeply and “relax” (as if) as she put the new one in. I was uncomfortable all day yesterday, but feel fine now.

I’ve read the blurb. Apparently now if I want to have HRT I will only need half a dose in four years time because the coil already releases a lot of hormones. Do I want HRT? How will I know if I’m going to need it now that I’ve got additional hormones coursing around? There are increases in all sorts of things – not sure if this time the advantages are going to out way the disadvantages – although at least having another baby won’t be on the cards which is a very good thing.

One side effect I am very worried about (because my lovely friend whilst pissed recently suggested I go and get my entire face threaded) is that you can get more facial hair.

I will have to start wearing this sign around my neck very soon then:- 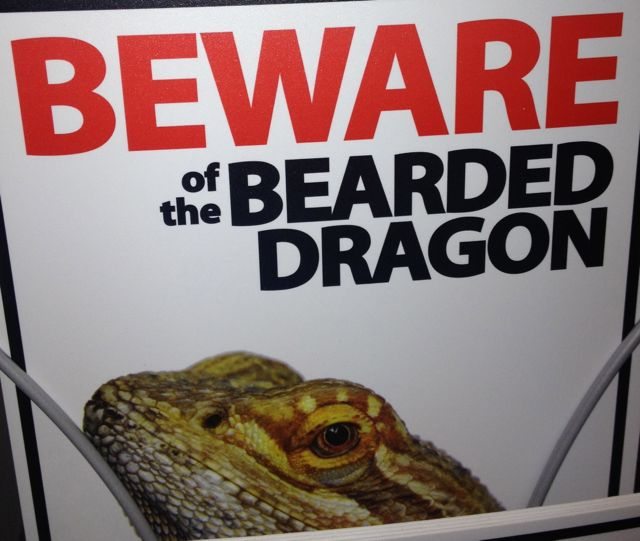 Get your entire face threaded? LOL For some reason that sentence makes me really laugh!

Can you imagine how long a poor girl would have to be moving backwards and forwards with thread between her teeth. How awful. Lx

Hated my coils, the damn things kept falling out, clearly I have a cavernous cervix. I do think the family planning people are brilliant though, they are in and out without hardly noticing they were there (I’ve had a few man friends like that too!) the GPs seem to make a painful hash of it.

I did a post recently on the peri menopause. I’ve decided to hold off hrt for a while and try the holistic herbal route. So far so good 🙂

It’s a difficult one, this menopause issue Lx

I’m afraid I cross my legs when anyone even mentions the coil. Mind you, sounds like a result on the HRT front. Do you get more facial hair with HRT? I thought it was caused by the drop in oestrogen during menopause and that HRT topped up the oestrogen again and the beard melts away …. maybe wishful thinking x

Well you def get more facial hair with the coil it seems…..Lx

I had the copper coil for ten years… Taking it out was easy but getting the next one in not so great!
I didn’t have the hormones because I was contra-indicated… What a relief! I already have to have my entire face threaded as I have had a bum fluff face for years!!! Lol. It’s remarkably effective!