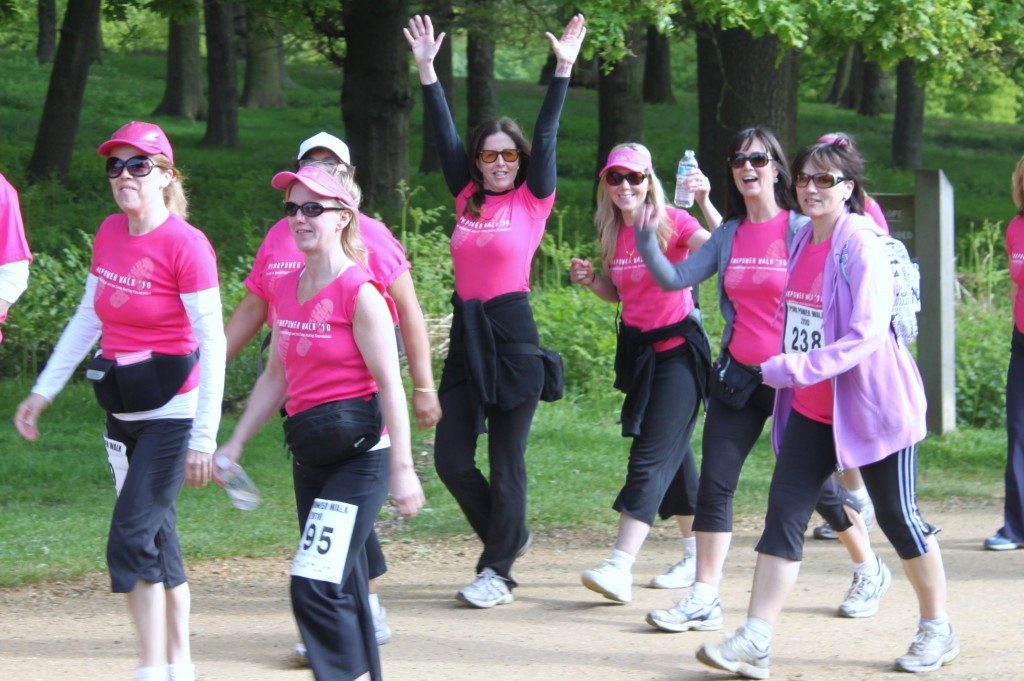 Never mind. I’ll get through it. As always. Buoyed up by the vast swell of pink (mostly) women to raise money for breast cancer research in two charities:- Breakthrough and The Caron Keating Foundation. Hopefully this year’s walk will see the million pound fundraising target broken. It is vital that we continue to take some positive steps (even if it involves toenails falling off) to help eradicate Breast cancer.

This will be the ninth year I have walked – that is every year since it’s inception and since that time I have had a very young beautiful friend die of breast cancer, another mother I know die, three other people dealing with it at present and my lovely friend who I’m walking with (who has only missed one out of all the walks so far) who had a mastectomy 18 months ago. Last year we walked together and the day after she had to go under the knife again for further reconstruction at the Royal Marsden. I was concerned about her walking such a distance, given she was going to have to have a general anaesthetic the next day but she said that it would be a good excuse to have a little rest. Now she is completely healthy and looks better than she has ever done before.

Just today I have heard about another woman I have known in our area for years going through chemotherapy. Too many.

The year Jo was meant to walk – Sally took her place and we walked together:- 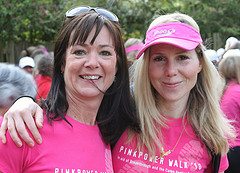 Here is what my friend wrote about her experience a while ago:-

I am 42 years old and the mother of four daughters who are 15, 14, 12 and 4. In June 2010 I was probably fitter than I had ever been as I had been training for a marathon. I can remember thinking how well I felt then which is fairly ironic looking back. One evening as I took off my bra I noticed a tiny, dark brown spot in the bra cup, I honestly didn’t think much of it and assumed I may have dropped a little bit of my favourite Green and Black’s chocolate down my front as I am such a clumsy eater! The next day I wore a different bra but noticed it again and then the next day and the next. It became obvious that my nipple had some sort of discharge and so I booked a Doctor’s appointment, at that time it never even crossed my mind that it might be particularly sinister.
The Doctor thought it was probably nothing but I was referred to my local breast clinic. My friend Lucy came with me and the first thing I noticed was that the clinic was absolutely full to bursting. I waited for ages to be seen and then when I finally was the Doctor was charming, reassuring and very calm. He sent off a sample of the nipple discharge and said I should return a week later. When I went back the following week he said that there were some abnormal cells in the discharge but he wanted to do a biopsy of the nipple duct and thought that by removing the duct there would be no further problem.
I was seen very quickly and efficiently – almost on a weekly basis. This is what impressed me so much about the NHS care I was given. From discovery of the discharge to the removal of the duct took about three weeks. Despite the huge number of women that were at the clinic every time I went, the speed that my case was dealt with was remarkable.

I returned to the clinic alone for the biopsy results, I told my husband and friends that I would be fine as I was so confident that once the duct had been removed there would be no need for further treatment – how wrong I was! My consultant didn’t really beat about the bush he just said the biopsy showed that there were cancer cells in the duct and that it was called DCIS (Ductal Carcinoma in Situ). I remember feeling very calm initially but when the breast cancer care nurse came and took me to another room to call my husband, the enormity of what I had just been told slowly began to sink in.
After a further biopsy of the other ducts in my left breast I went back to see my consultant again. This time my husband came with me. From the moment I walked in and saw the look in my consultant’s eyes, I knew it wasn’t going to be great news. This time he told me that the whole breast had extensive DCIS and would therefore have to be removed and how sorry he was, but that the prognosis was good if I had the surgery. As I sat nursing a coffee afterwards I recall holding my husband’s hand as he sobbed, whilst I calmly reassured him everything would be fine. Isn’t it funny how we all deal with things differently?

I had my mastectomy in mid September. It was a six hour operation done by a fantastic plastic surgeon and his team at the Marsden. They took fat from my stomach in a “tummy tuck” style operation and moved it to my left breast which was reconstructed at the same time. Within 12 hours I was up and about – I remember feeling self- conscious at my lack of make-up and looking so utterly revolting, so even though I had a 21 inch scar around my tummy I decided to paint my toe nails just so I could feel a bit more normal!

Since then I have had two more operations to reconstruct my nipple and I am now waiting for my tattoo to be done which is basically around the areolae area to create a sort of trompe l’oeil type of effect…. should be interesting – never thought I would get a tattoo!

This might sound a bit weird but all in all it has been a very positive experience. I know I was lucky. I was lucky to have had a sign that something was wrong so early that it could be dealt with quickly. I even think how if it had been in the winter months and I was wearing a black bra instead of a cream one – I wouldn’t necessarily have spotted the discharge. I was lucky too that once I had my mastectomy done I didn’t need further treatment. I know so many people who have had radiotherapy, chemotherapy and are on Tamoxifen in addition to the surgery. My surgeon is a complete genius and has created a wonderful new breast that looks incredible. I was in a bikini lying on a beach four months after my surgery – admittedly I did have big pants on as my scar is rather wide but you would never really know otherwise.
And so for all the awful, heart wrenchingly painful stories that you might have read about breast cancer…. please remember there are so many positive ones too. Naturally I did have my dark moments – usually when I was putting my little three year old to bed and as I kissed her soft, sweet smelling hair goodnight I would wonder if I would be there for her as she grew up. But there is nothing more life affirming than having children and they have given me more strength than they will ever know…

Here we are together on the walk last year:- 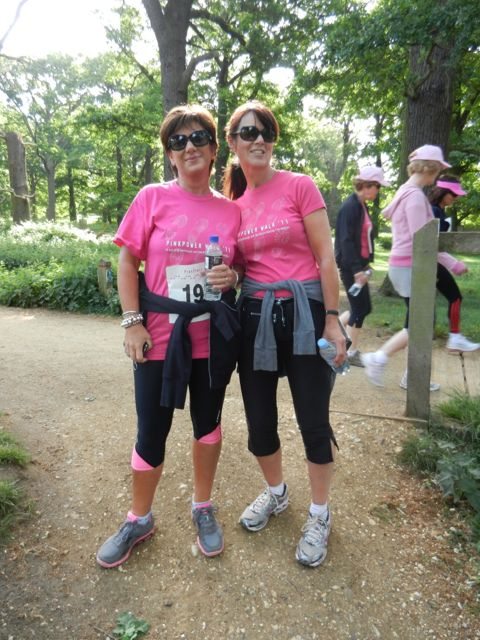 Please donate if you can. We have a just giving page and I’d really appreciate your support:- 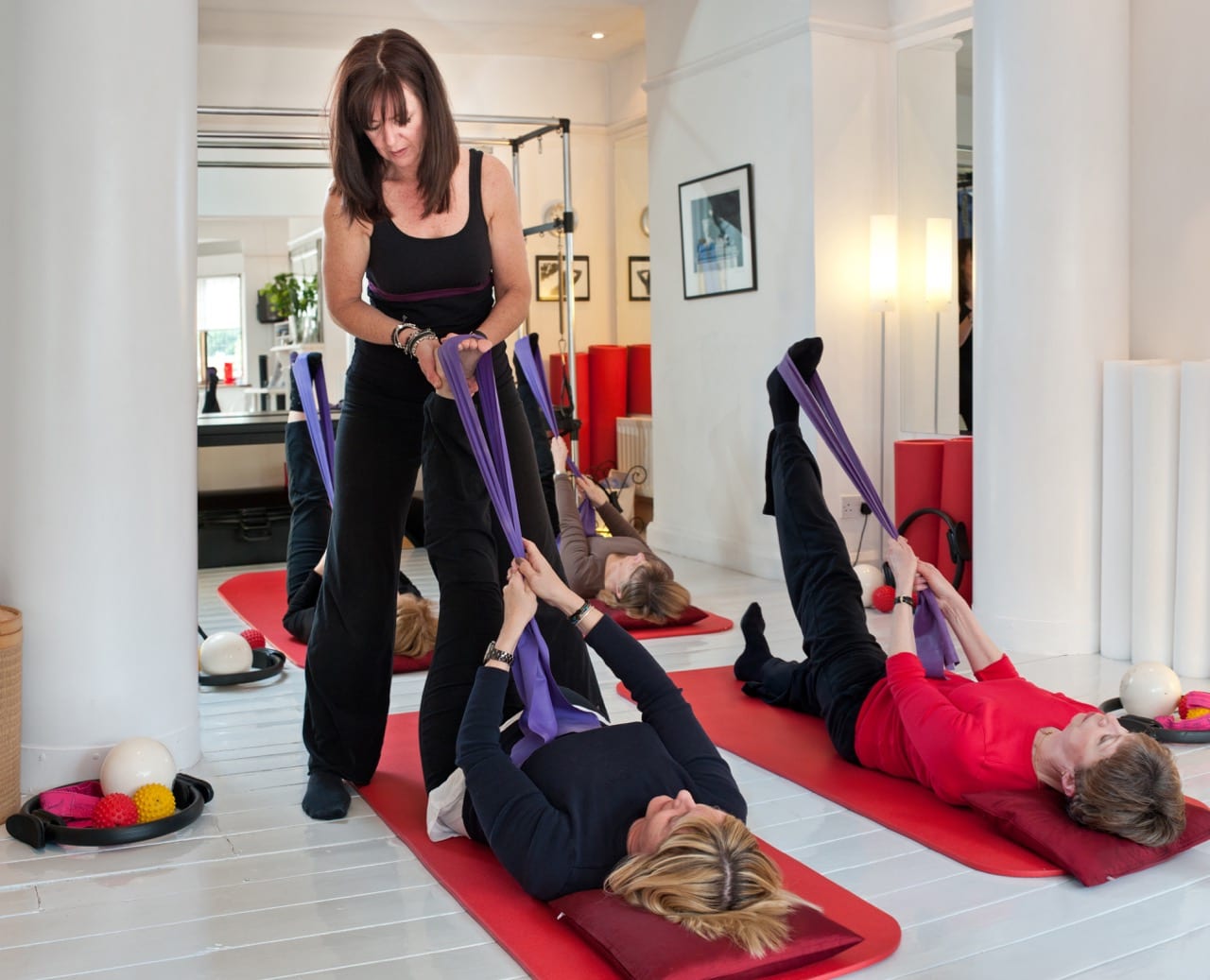