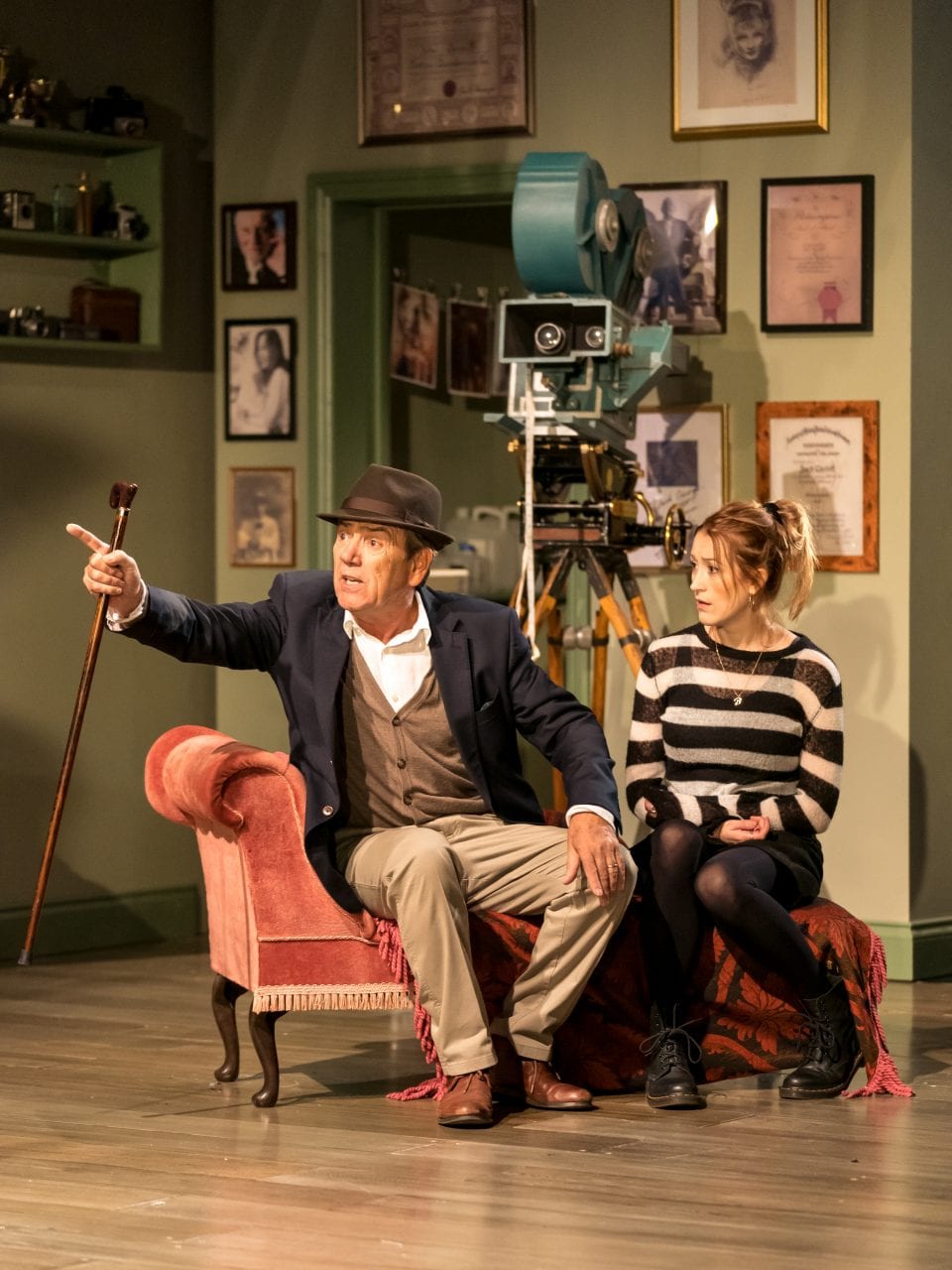 “Prism” first shown at the Hampstead Theatre in 2017, is a brilliant recreation of the life of Jack Cardiff and is currently showing at the Richmond Theatre.

He was one of the most influential camera/lighting directors of 20th century film making with “The African Queen” and “The Red Shoes” just two of his many triumphs. Terry Johnson had Robert Lindsay in mind when he wrote the play. Not only that, but he directs as well and so he and Robert have worked hand in glove to make “Prism” as good as it can be on the stage as an entertainment and a depiction of a life. 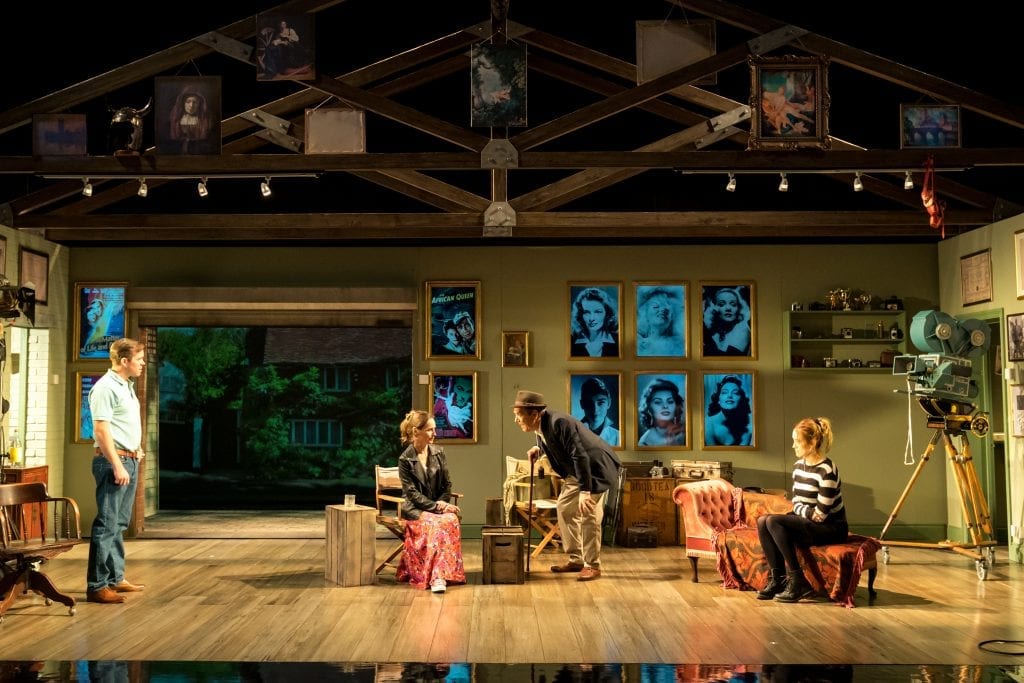 With two such masters of their respective crafts working at the very top of their game, it will not surprise readers to hear that this play is an absolute masterpiece. Utterly compelling, enthralling and exhilarating. “Prism” is so rich in content, it’s like going to the National Gallery, The National Portrait Gallery and Museum of Photography, Film and Television all in one day. During the course of the show we meet the painters Rembrandt, Vermeer, Renoir and Van Gogh, the writer Arthur Miller, Hollywood stars Katherine Hepburn, Humphrey Bogart, Marilyn Monroe, Sophia Loren, Audrey Hepburn, Sylvester Stallone and the directors Alfred Hitchcock and Martin Scorsese.

We meet Jack as he succumbs to Alzheimer’s. The play takes place in his garage which has been turned into a film studio by his family. His wife Nicola and his son Mason are at their wits end trying to care for him. Enter Lucy the young care assistant. The play is a classic four hander. 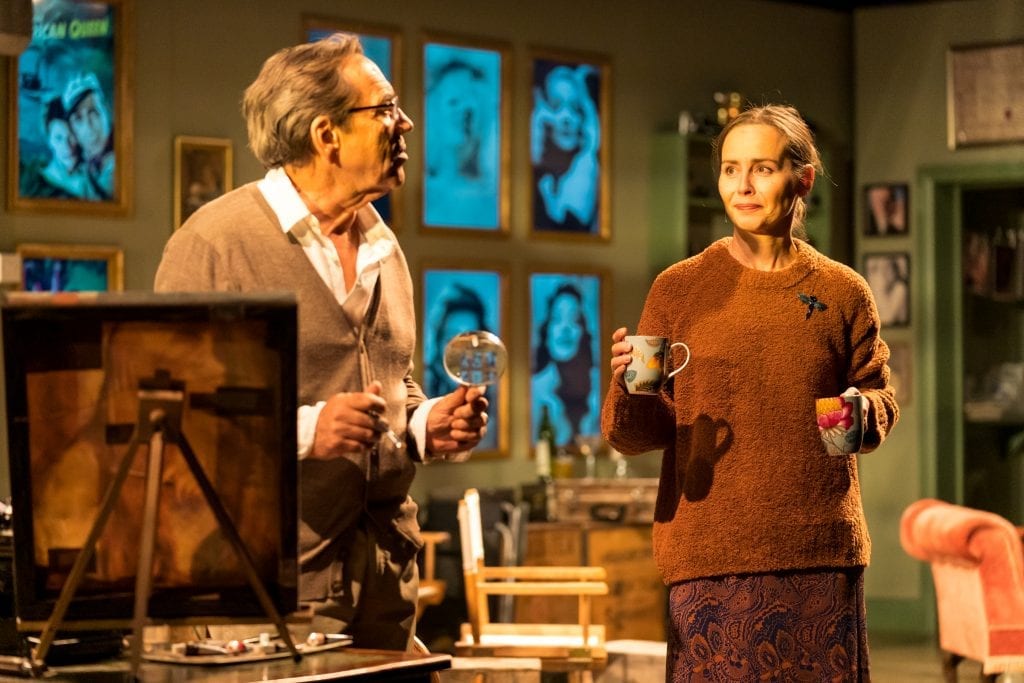 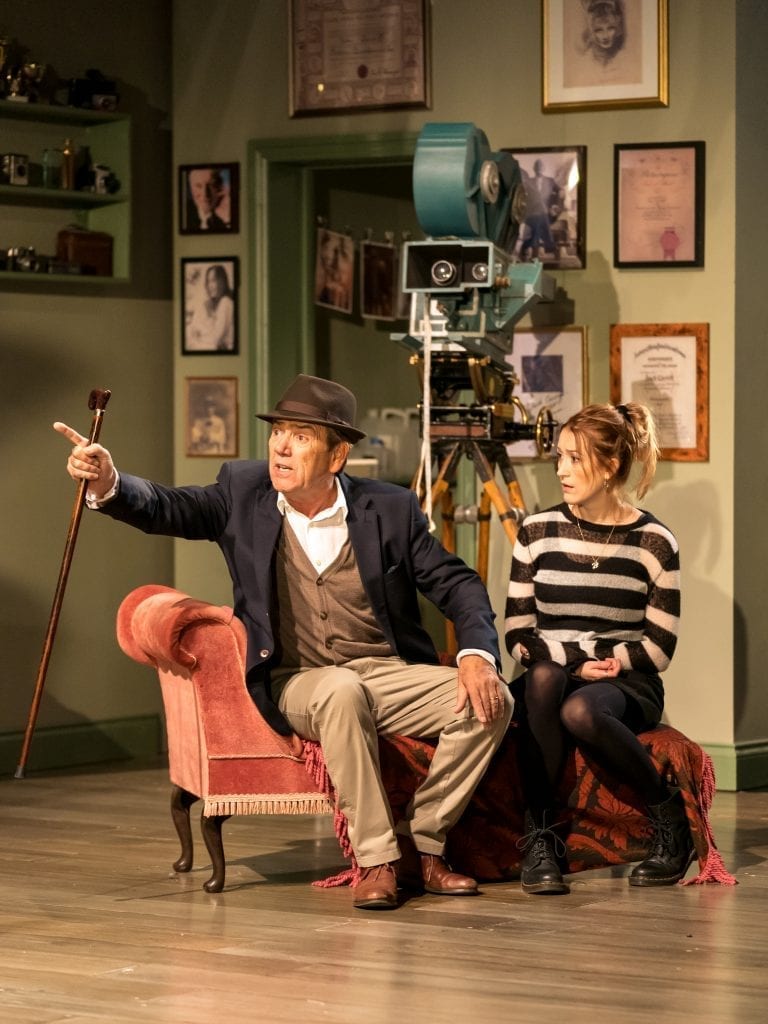 Fittingly for a play about looking and light, the set for “Prism” is sumptuous. Tim Shortall has designed a visually stunning space. The garage is like walking onto a Hollywood set and art gallery at the same time. There are cameras and lights on wheels, a casting couch, old master paintings on the walls and most prominently, framed photographs of glamorous Hollywood actresses: The Hepburn’s Katharine and Audrey, Marilyn Monroe and Sophia Loren. Intriguingly behind these photos are video screens which come to life to show film footage of these stars as they were in their heyday. To top that the whole set then fades away to reveal a vast panoramic film screen and hey presto we are on the set of “The African Queen”, with running water, the jungle and all too realistic sound effects of jungle noises, thanks to the wizardry of John Leonard’s sound system. 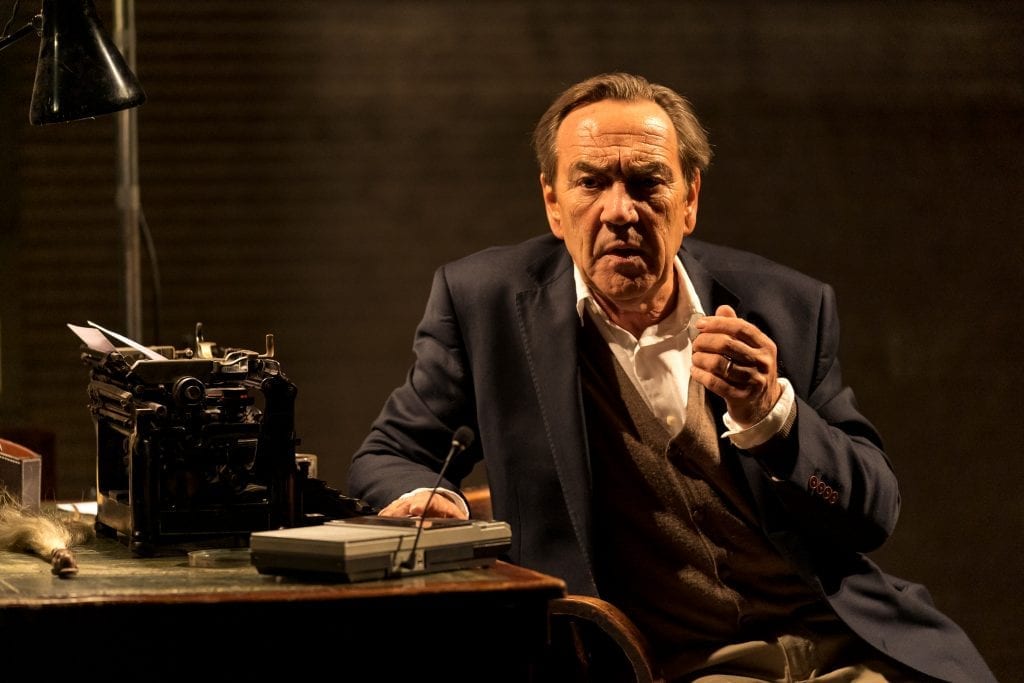 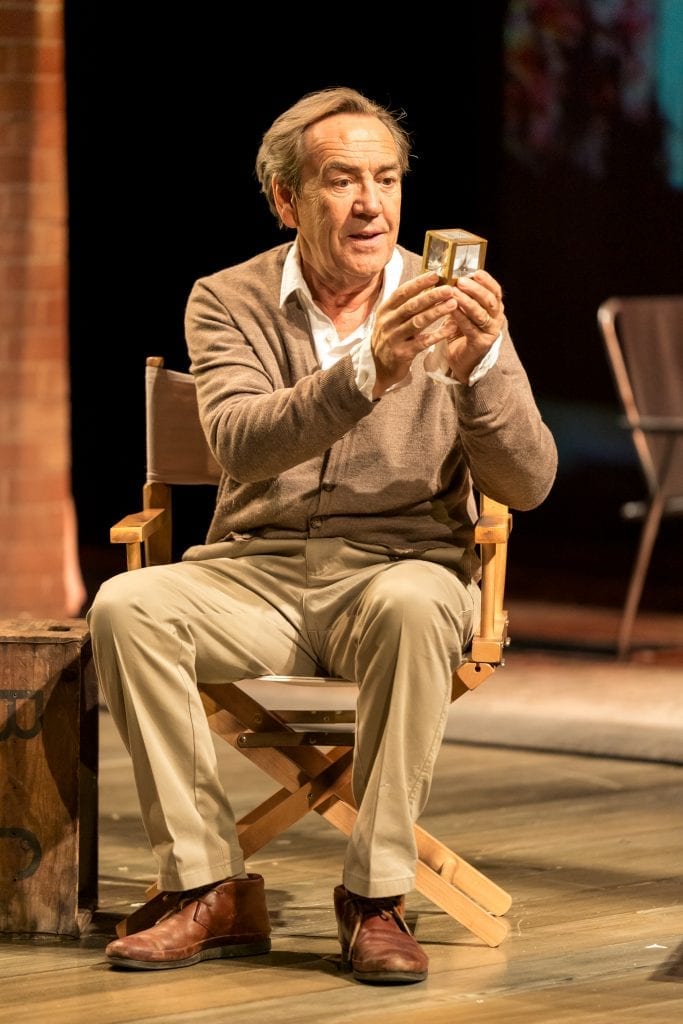 The four performances are superb. They really can’t be praised highly enough. Robert Lindsay plays two Jack Cardiff’s as it were. He plays him both pre and post Alzheimer’s. He gives a funny and moving portrait of a man in decline. He gets the balance absolutely right between comedy and sadness. His comic gifts are on full display as he teases his son, wife and carer. Disinhibited by Alzheimer’s he gives free reign to the ‘F’ word to marvellous comic effect. He teases his fellow inmates by alternating between genuine and pretend forgetfulness so that they don’t know whether they’re coming or going. In a heartbeat he switches to pathos and sadness and then back to comedy. This is Robert Lindsay at the peak of his career and it is mesmerising. 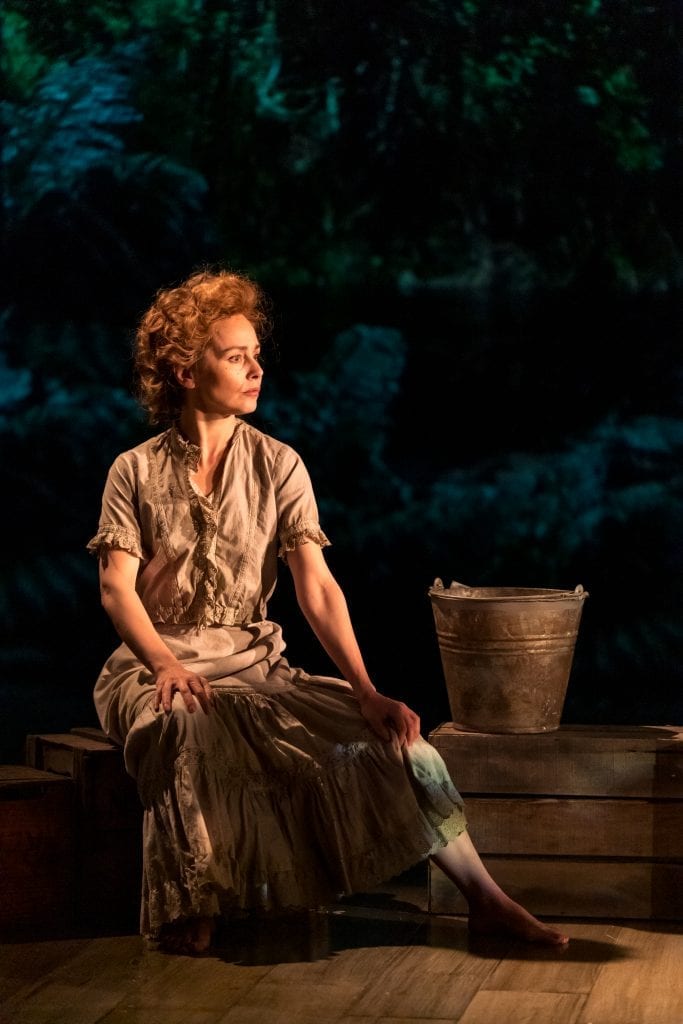 The other three aren’t bad either. Oliver Hembrough playing his son Mason in the first act and then Humphrey Bogart in the second is excellent. Tara Fitzgerald plays Jack’s wife Nicola in the first act. She has to live with the pain that he doesn’t or won’t recognise her or say her name. In the second act she is superb as Katherine Hepburn on the set of “The African Queen”. She looks the part, due to some fine wardrobe and wig work from Abigail Morris. Her accent is superb and she finds something out which (as Nicola in the third act) will prove very uncomfortable. Then we have the wonderful Victoria Blunt as Lucy, the seemingly chavy care assistant, in black Dr Martens with a ring through her nose speaking in broad Yorkshire accent. Wait until you see her in Act 2 you are in for a treat. She is absolutely superb. 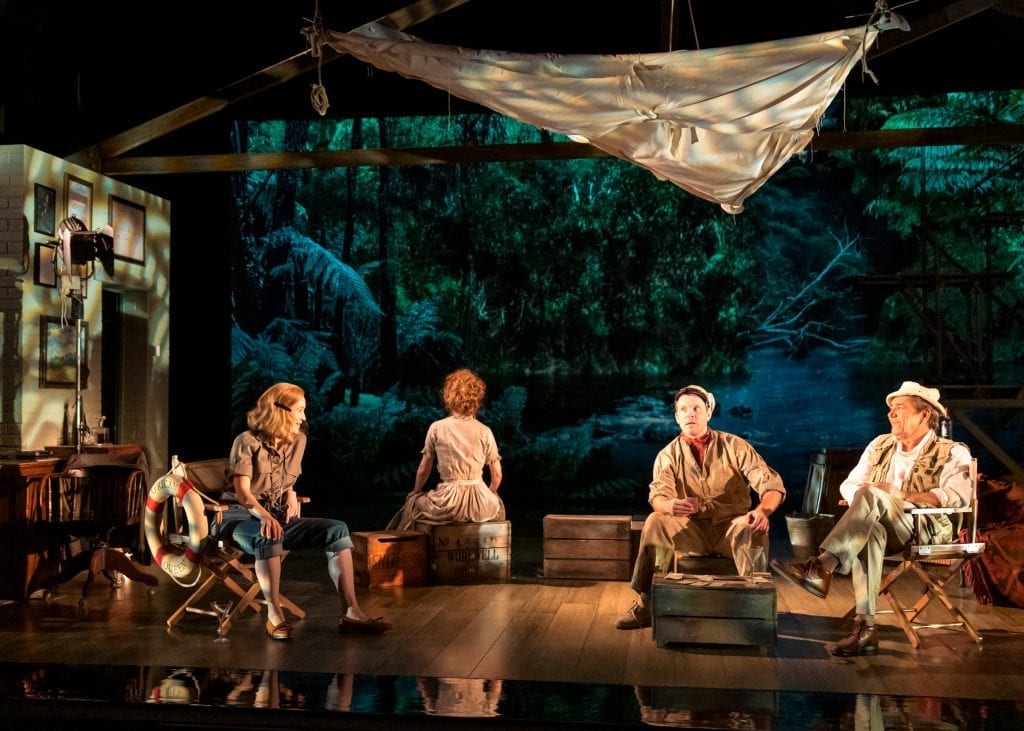 I have only hinted at some of the richness to be found in “Prism”. It is a superb collaborative effort which manages to bring together cast, crew and creative to make something much greater and more profound than any individual possibly could. Its teamwork creating something truly special and memorable. Fittingly there were both tears and laughter in the auditorium last night. Auden said “in the prison of our days teach the free person how to praise”. Before one can praise, one needs to know how to look. We all need ways of seeing. Through Terry Johnson’s “Prism” we can get out of our visual prison and see the world afresh.