REVIEW OF TONIGHT AT 8.30 BY NOEL COWARD AT THE RICHMOND THEATRE 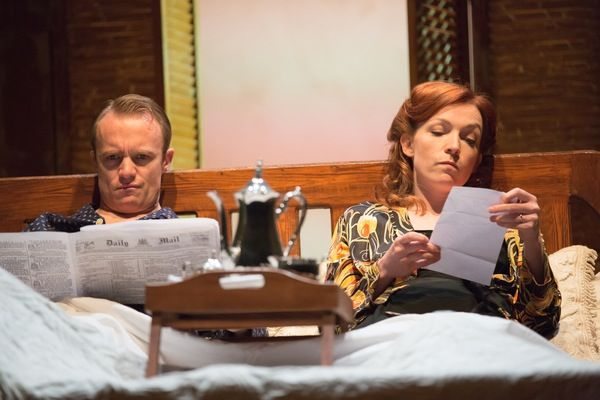 Two friends of mine went together to see Tonight at 8.30 by Noel Coward at the Richmond Theatre and they’ve both done reviews!

REVIEW ONE
Noel Coward (1899-1973), actor, dramatist, composer was born in Teddington – there is a blue plaque marking the house – and so it is fitting that Richmond Theatre are staging 9 of his one act plays. The night I was there I saw Ways and Means, Fumed Oak and Still Life. All three were fascinating and well worth an evening in the theatre. I’m looking forward to seeing the remaining 6 in the cycle. Coward , being lower middle class who rose through the class hierarchy, was acutely sensitive to the nuances of the English class structure. His social range is remarkable. A social climber he knew every class to a T. Ways & Means shows his awareness of the world described by Evelyn Waugh & PG Wodehouse, a world of country house parties- “The Stately homes of England, how beautiful they stand, to prove the upper classes, have still the upper hand.” – aristocrats and comic butlers. The opening scene is a gem. We see a couple sitting up in bed having breakfast. The reading the Daily Mail and the Woman, brilliantly portrayed by Kirsty Besterman, opening letters with a knife. She makes three actions to open the letter the third executed with such venom that it finishes menacingly inches from her husband’s face. In a few minutes without words Coward has conveyed the tension in their relationship. Coward shows a upper class couple trying to keep servants, holiday on the Cote d’Azur and gamble at casinos with no money ! Coward was acutely aware that the English Aristocracy was in decline. This is shown comically in Ways & Means via the American lady who wins 170 thousand francs gambling at the English couples expense. American new money dislodges English old money.

Fumed Oak is Ibsen’s “A Doll’s House” as rewritten by a gay man, which Coward undoubtedly was. It is the husband who is the oppressed partner not the wife. Marriage is a trap and a con by women on men, according to Coward. The scene where the put upon husband comes home and lets rip is exhilarating. “I’m leaving you because you are cold , mean and respectable “. He walks out. Restlessness and getting away is a recurring motif in Coward’s oeuvre. Only Coward could see marriage like that. His homosexuality gave him a unique take on England and the English.

Still Life, anticipates” Brief Encounter” by 8 years, being set in the refreshment room of a railway station. There are some marvellous comic exchanges but the play centres on a couple who meet by accident in the refreshment room and agonise about embarking on an affair. The climax of the play sees the tortured heroine walk out onto the platform in a clear reference to Tolstoy’s “ Anna Karenina”, but she walks back in moments later. A very effective scene and a satisfying reference for those in the know.

Coward’s range of comic, witty and often penetrating insights make for a stimulating, entertaining and compelling evening in the theatre. The two hours twenty minutes traffic of our stage flew by leaving me wanting more. Definitely up for seeing the rest of Coward’s “Dinner at 8.30”. It was a real treat to have the opportunity to see the very best of Noel Coward’s short plays at Richmond Theatre last night. Not only that, the theatre itself is also very stunning with Victorian décor dating back to 1899.

3 short plays per night are showing over 3 consecutive evenings, which capture the true essence of Coward’s writing and it is the first time that they have been performed as a collection since Coward starred in them himself in 1936.

The first play entitled ‘Ways and Means’ revolves around a bankrupt couple, who have lost their money through the husbands gambling addiction. In order, to get themselves out of debt they arrange for their disgraced chauffeur to stage a mock robbery in their house, leaving them gagged and tied up in the house. In true Coward style it doesn’t all go quite to plan.

From fraud/robbery we move to a love affair between Alec and Laura across a 12 months period and this is contrasted with the more unconventional relationship between Myrthe and Albert.

This is based on suburban life. A down and out middle aged salesman, who has saved enough money to cut all ties with his family decides to walk out on his wife, mother in law and daughter and decided to tell them all straight, exactly what he thinks of them.
The plays give you a real insight into the work of one of Britain’s great play writers and it is wonderful opportunity to see. It is a fantastic night out in a beautiful theatre.