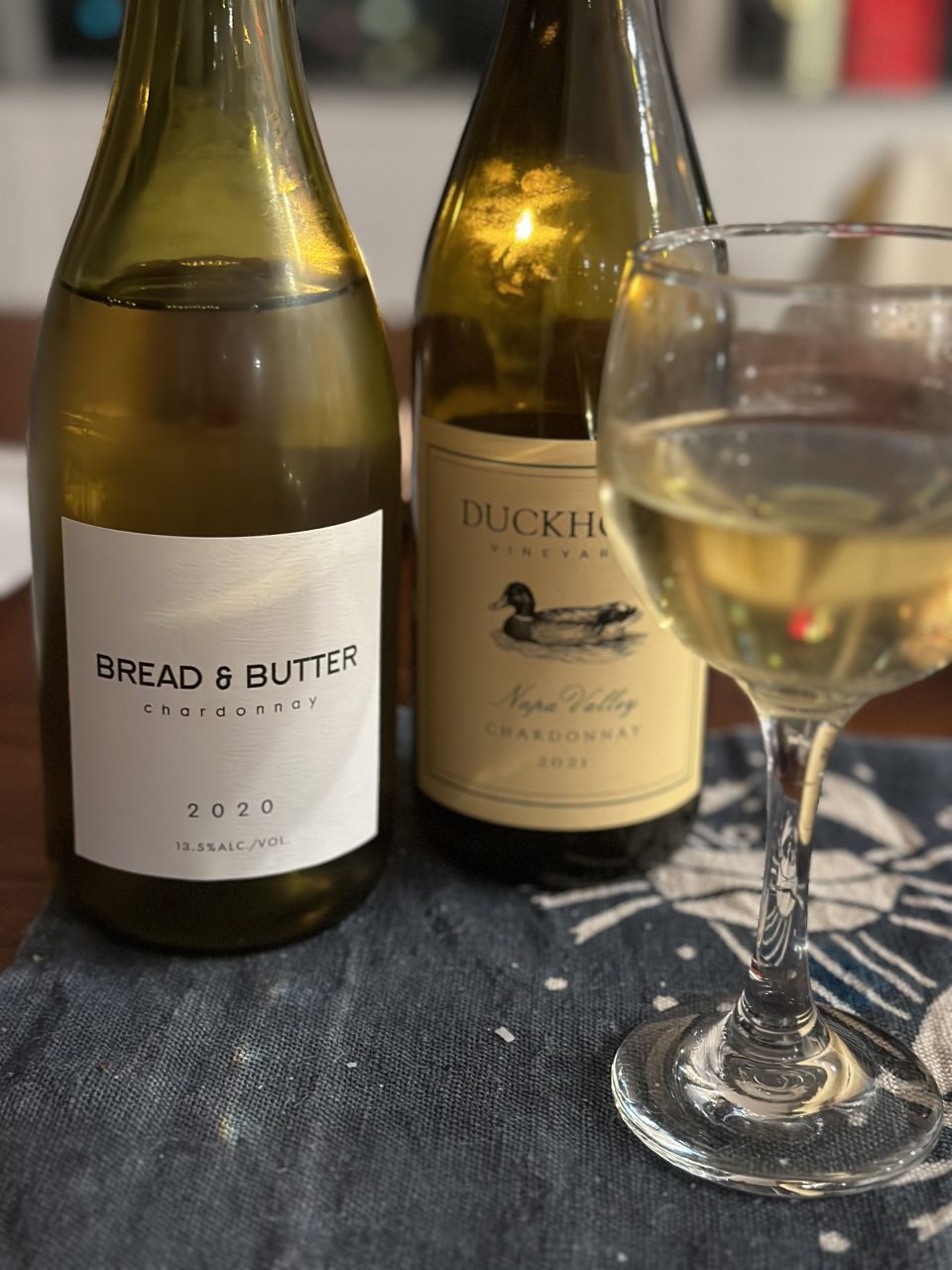 My friend and I have just returned from a wonderful week in Los Angeles – but my recommendation would be that if you’re planning “A Wine Lovers Tour of Los Angeles then DON’T GO…IT’S SOOOOO EXPENSIVE TO DRINK WINE THERE.  I would suggest you instead go on a “Mohito Lovers Tour of LA” (you can get them served by the jug), or a “Tequila Lovers Tour of LA”…..we simply had no idea just how expensive it was to quaff wine in the city.

To be honest, I don’t really understand why the local Californian wines are quite so expensive compared to their imports from New Zealand and Italy for example.  I did some brief research into why this might be and aside from the horrendous exchange rate (which meant nothing was cheap), the land costs, the labour costs and the “our wine is better than yours” sentiment that may keep the prices high, it still doesn’t make a lot of sense.  Maybe there are only small productions, but they have all the good weather, so that shouldn’t be an issue.

Can anyone help shed any light on this?

My friend’s sister very generously offered us her apartment to stay in, which helped hugely, as we could justify spending money on food and drink, because we weren’t paying for accommodation.  The apartment was very well located and high up – so it had spectacular views of both the gorgeous LA sunrise and sunset, depending on which window you were looking out from.  It also had a doorman and those cute little mailboxes and a lot of nosy neighbours with tiny dogs.  Having a tiny dog is perfect if you’re an inquisitive neighbour because you can just hang around the entrance whilst your tiny dog walks round the door mat several times or, if it doesn’t like walking, you can carry it under your arm and walk around the doormat several times yourself whilst asking all the newbies who they are and why they’re staying in your apartment block as they walk in.  The doorman doesn’t actually open the door, he just sits behind a desk saying “hello” to everyone and letting numerous people in, mainly it seemed to be people who were delivering pizza and Chinese takeaway to residents. 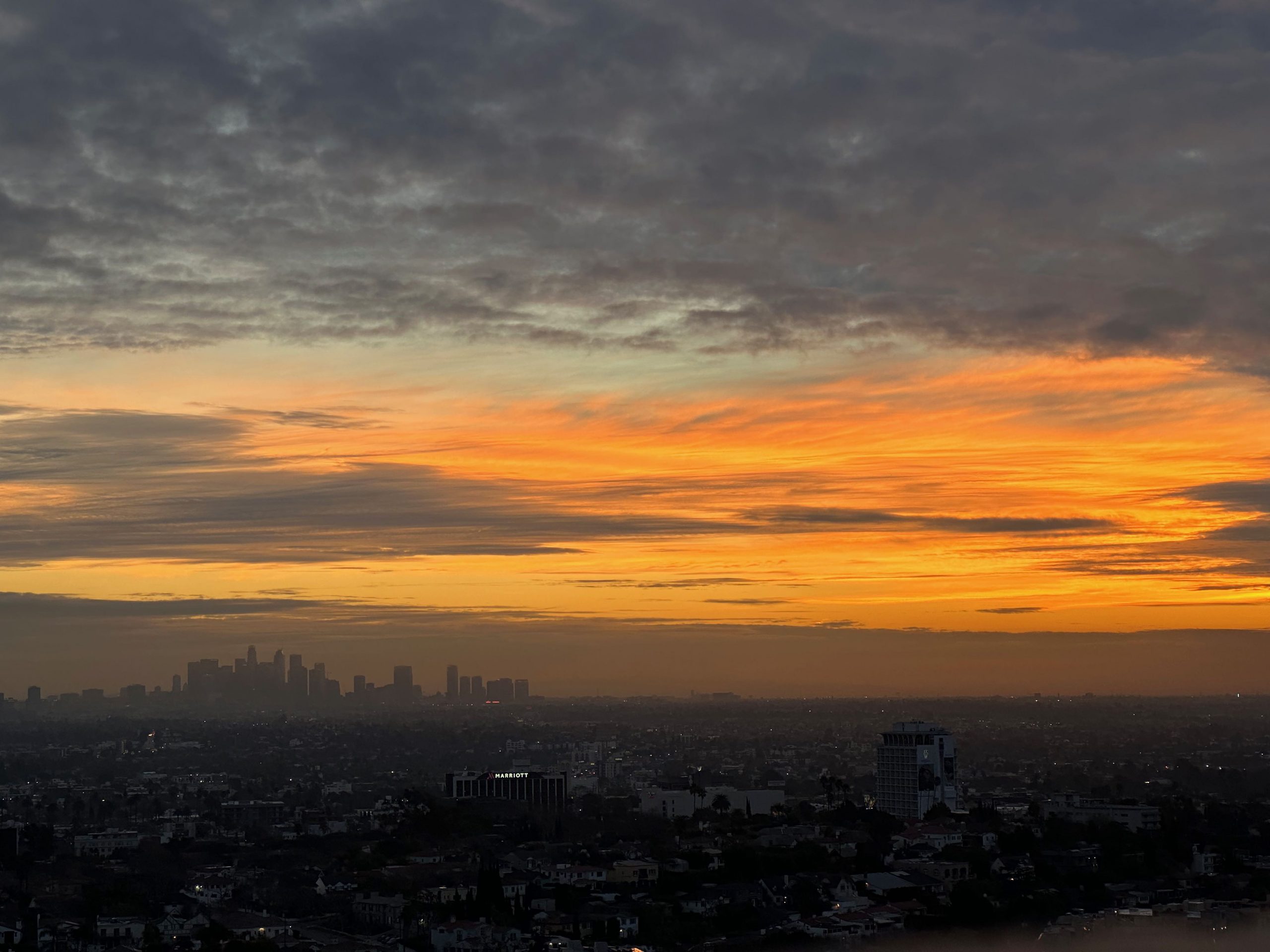 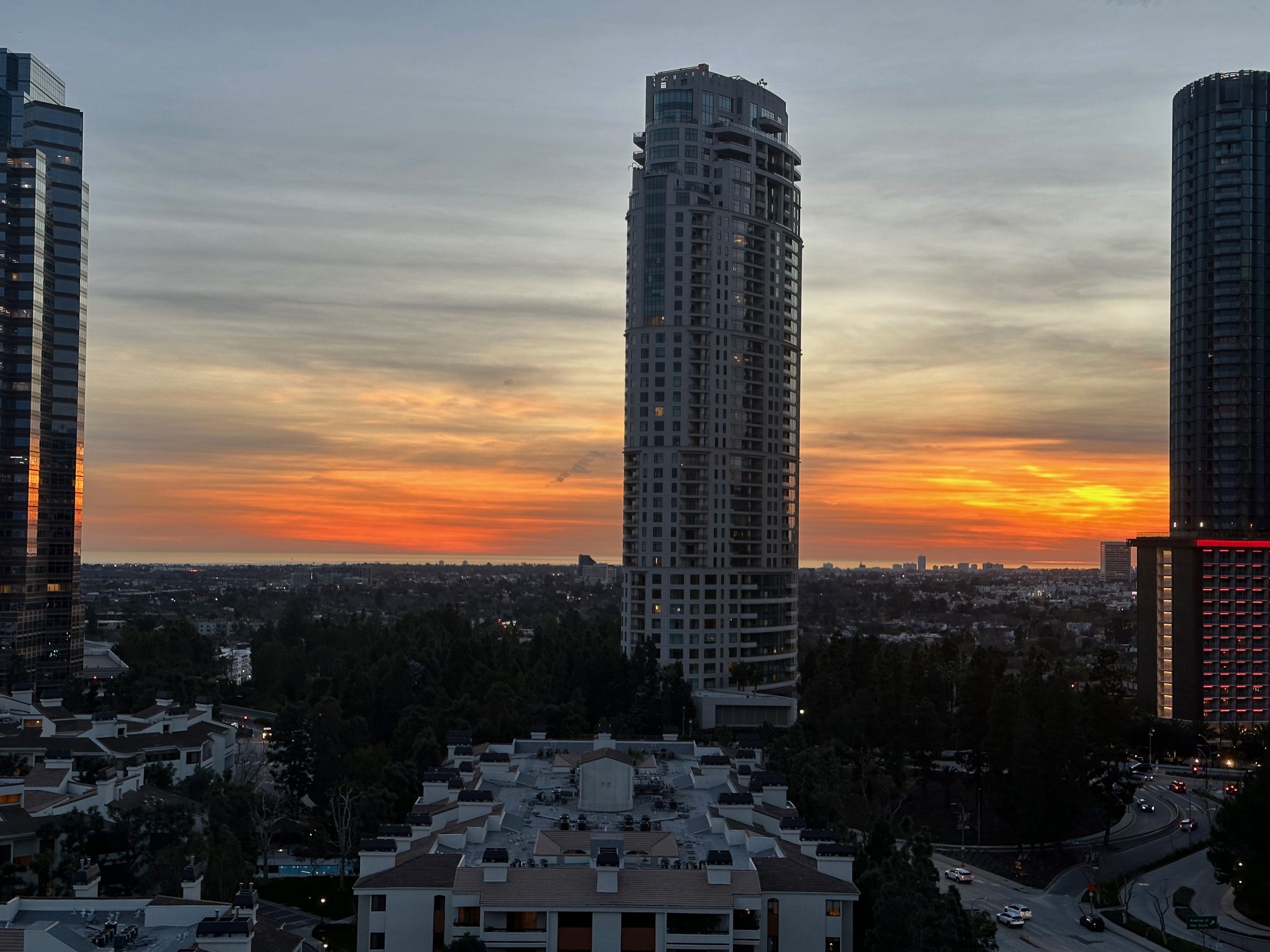 There didn’t appear to be a local “neighbourhood” as such, like you might find in New York, but maybe that was just the location we were in.  LA is notoriously difficult to get around without a car, because it’s such a sprawling city, seemingly made up of lots of little villages that you have to drive miles to get to, before getting back in your car to drive to the next one.  We weren’t brave enough to hire a car, both of us are nervous drivers at the best of times and the highway rules seemed confusing.  So we had to take about five Ubers a day – which didn’t disappoint – they were all quick and efficient and not too expensive – I’m pretty sure it would have cost us more to hire a car for the week.  I had hoped to walk a bit more, but when you ask how long it will take to get somewhere and they say 10 minutes, or half an hour, they mean in the car, not walking.  “The only people who walk around LA are either homeless or drunk” we were told.

We didn’t have the best weather – quite a bit of rain, but it was most certainly better than being in England in January and when the sun does shine in California, the light is glorious.  On the rainy days, we just ate and drank more, so it wasn’t really a problem.

We did walk endlessly to and from the Westfields shopping centre, because it was only a 15 minute walk from the apartment with a mere 5 highways to avoid getting run over on.  This was our local shopping mall and very well designed with a vast array of shops we liked, lots of places to eat, a cinema and a Gelson’s supermarket.

So this is where we found ourselves on day one, mouths agape as we tried to choose some local wine.  I’m not a Chardonnay drinker by nature, but I was keen to try their wonderfully buttery, rich assortment.  We were surprised to find that it was astonishingly expensive, even in the supermarkets.

We’d been given a list of wine suggestions from some local friends:- 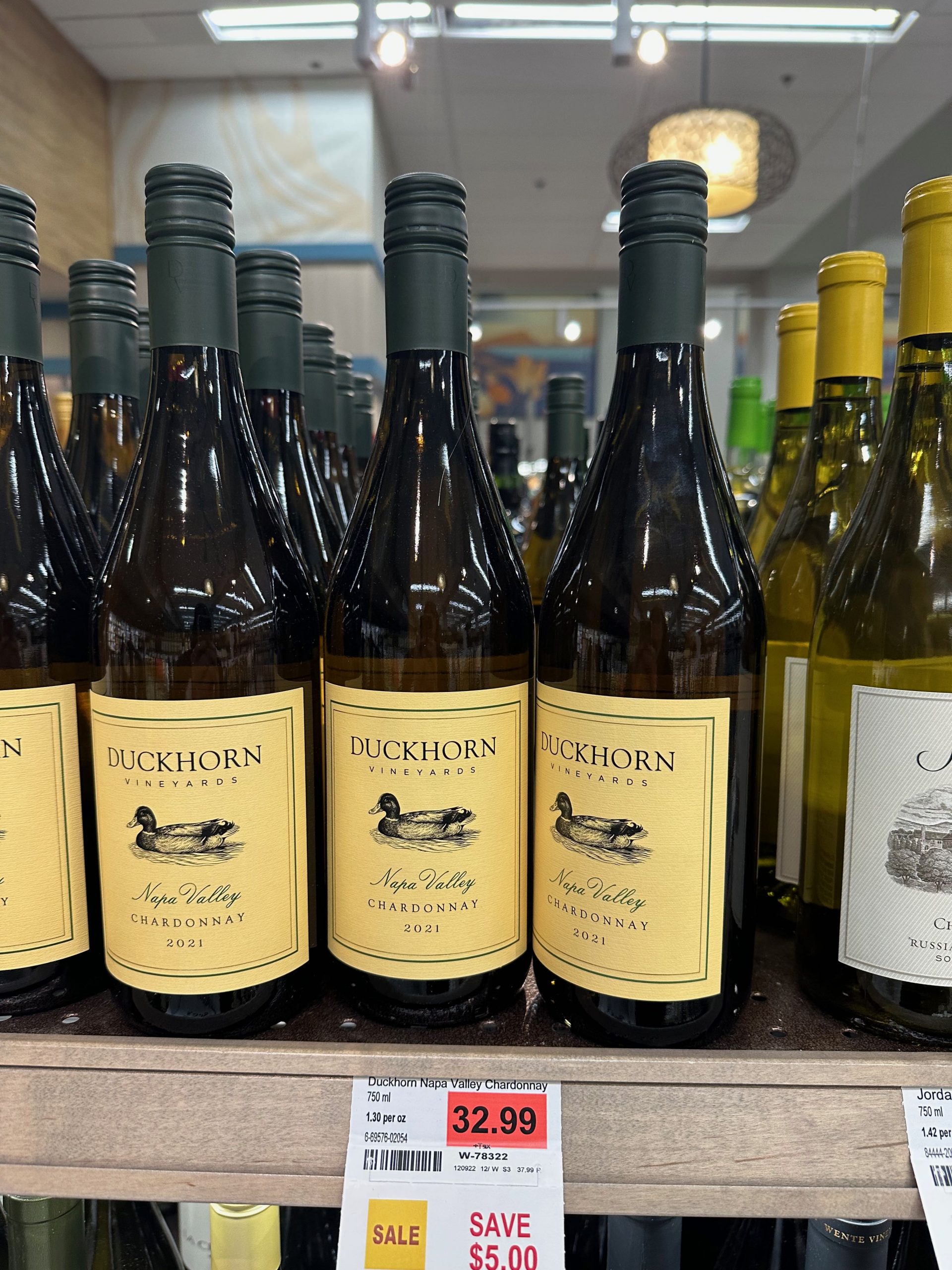 This is what I bought before we had our recommendations, mainly because the NZSB was so much cheaper!  The Viognier was nice too:- 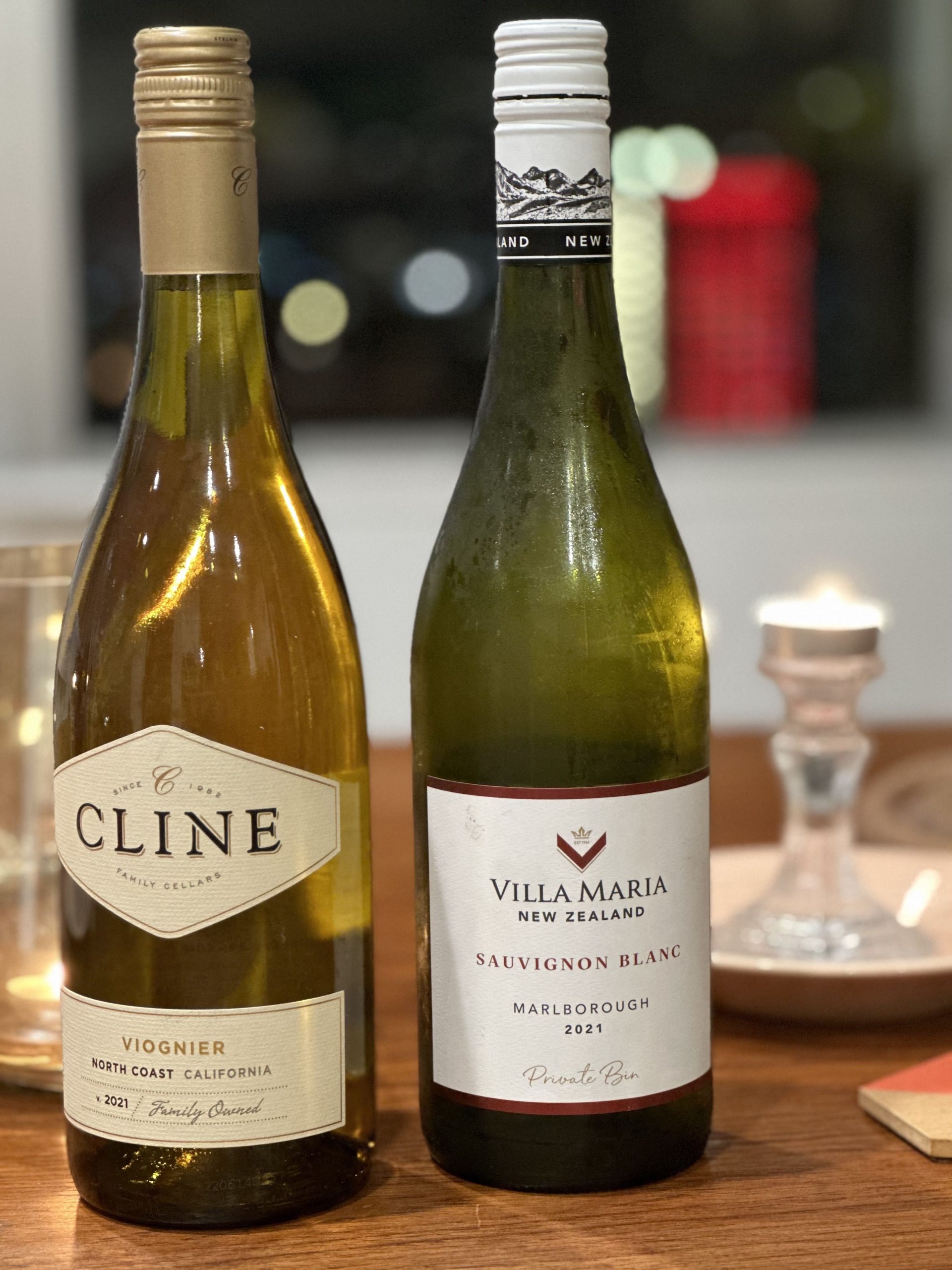 The Duckhorn Chardonnay from Napa Valley was delicious!  As was the Bread and Butter one that came in a lot cheaper:- 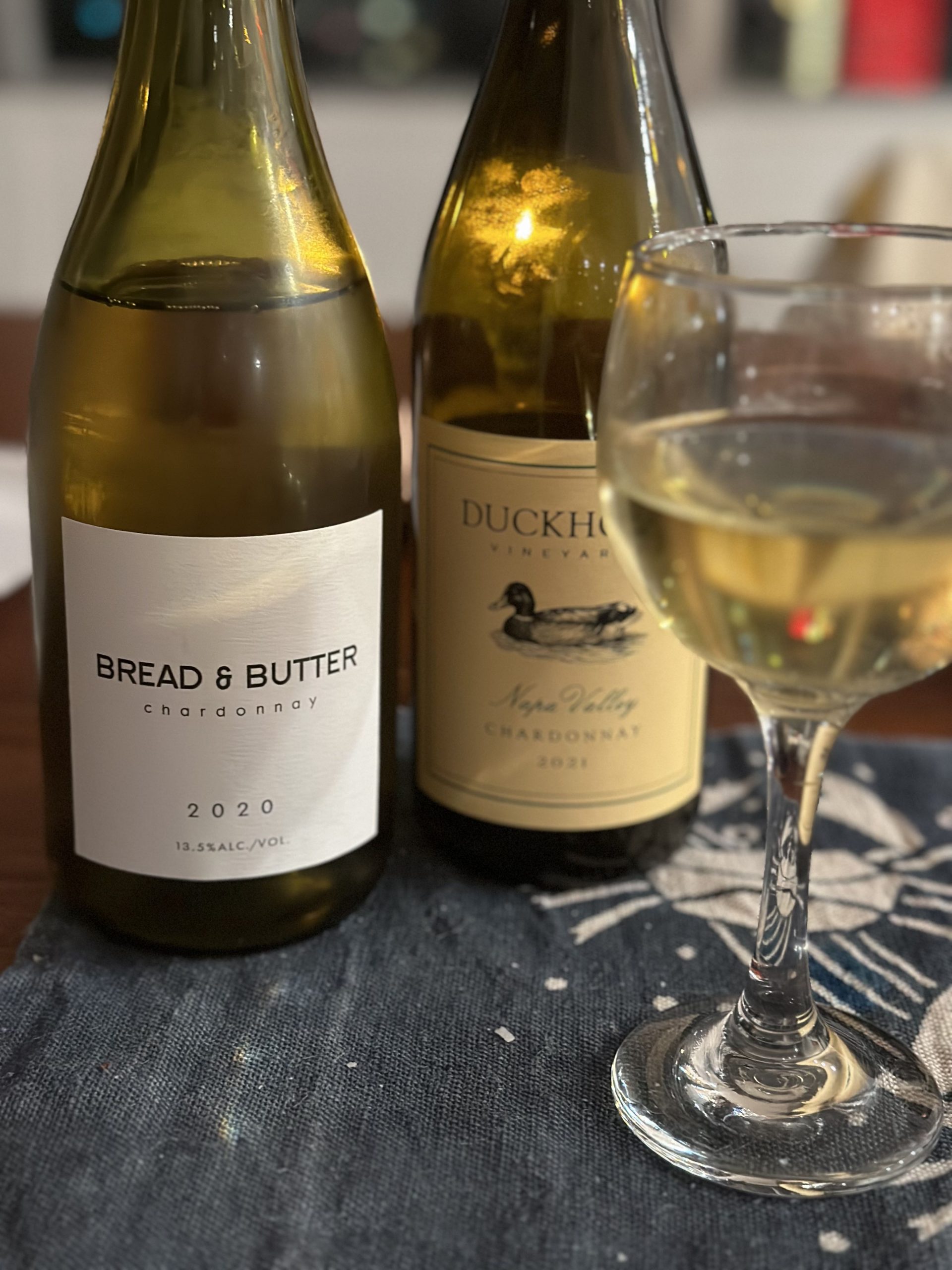 The imported wine was significantly cheaper – we could buy a bottle of one of my favourite NZ Sauvignon blanc’s for half the price – but we wanted to savour the local wines.  Pinot Grigio was much cheaper too – as you can see on this menu at Fanny’s in the Academy of Motion Pictures:- 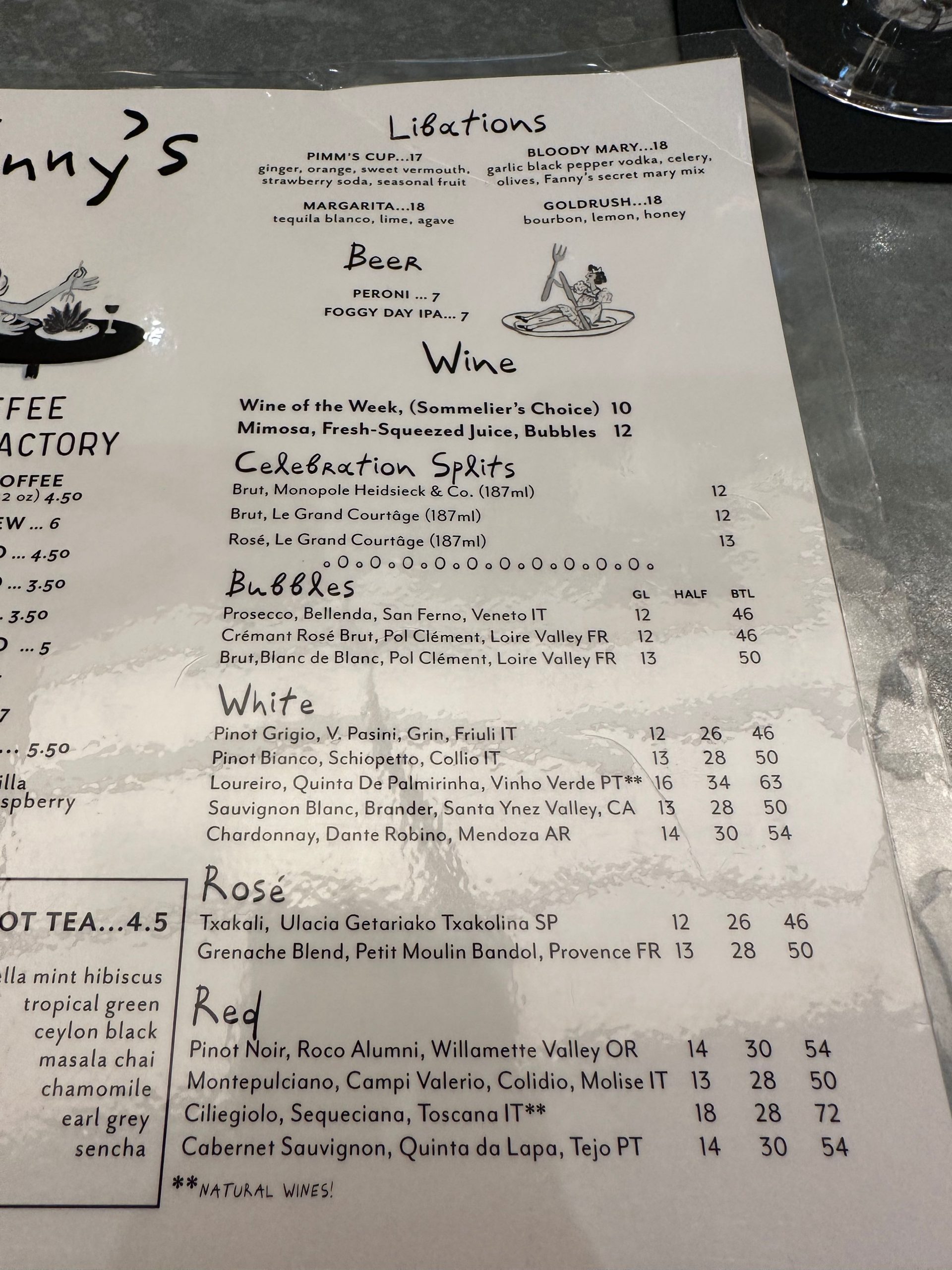 And what about the sparkling wines we asked? Again, the imported champagnes from France were no more than the local fizz, but we were given a recommendation to try a local sparkling from Napa:-

Schramsberg Sparkling ($42.00) and it was delicious (no champagne glasses in the apartment):- 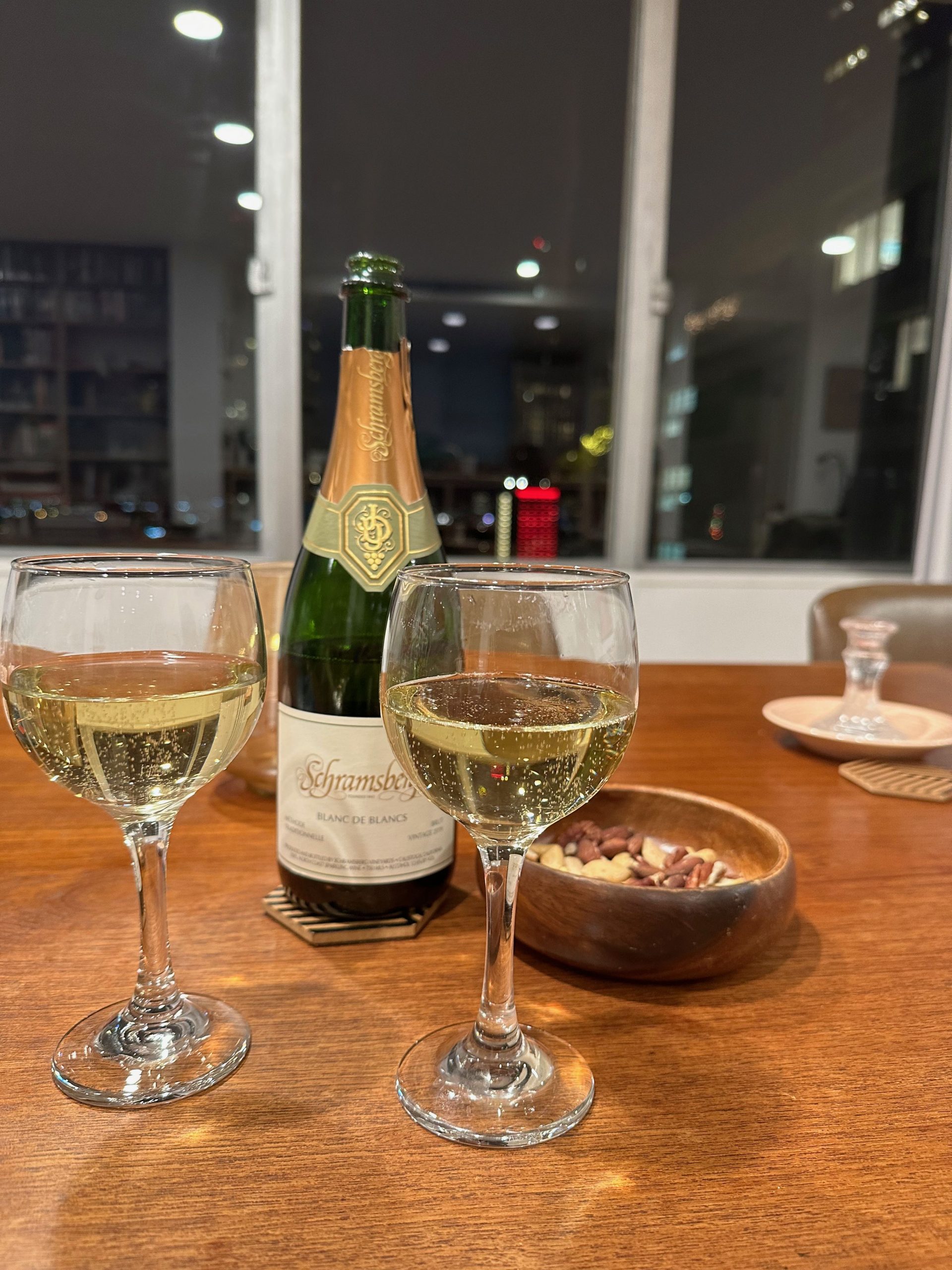 As was the sparkling Roederer Estate wine we had at the bar in the Waldorf Astoria:- 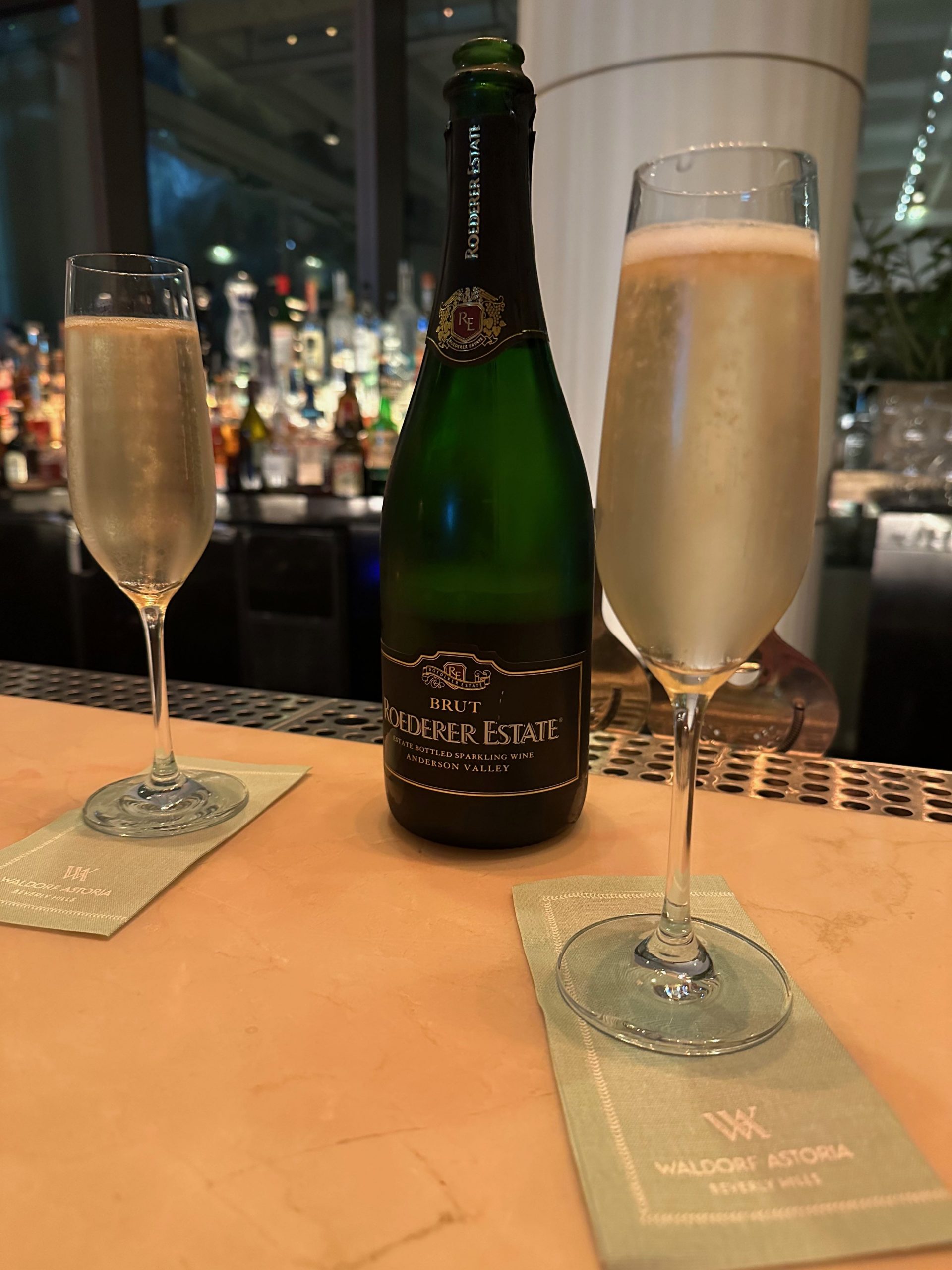 We chose a French sauvignon at the iconic République – they had a very extensive wine list and a female sommelier who was super helpful (sorry – the photo is a bit blurry), but again the French wines were cheaper than the local wines :- 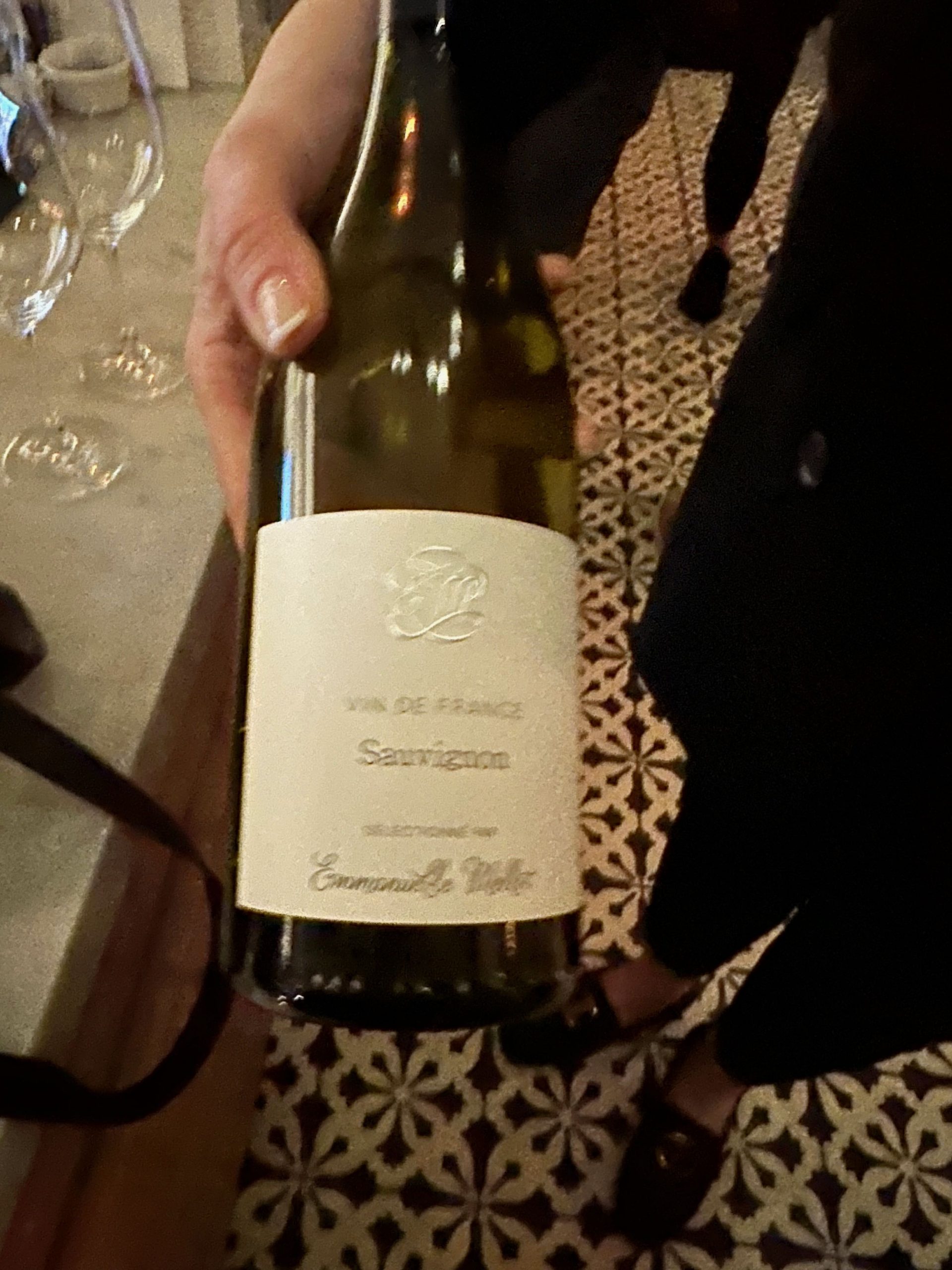 At The Draycott Brasserie where we had lunch one day, you can see again, very little in the way of local wines promoted, but when I asked for a glass of the Oyster Bay NZSB she told me she didn’t think I’d like it! Little did she know how much of it I have drunk in my lifetime…. 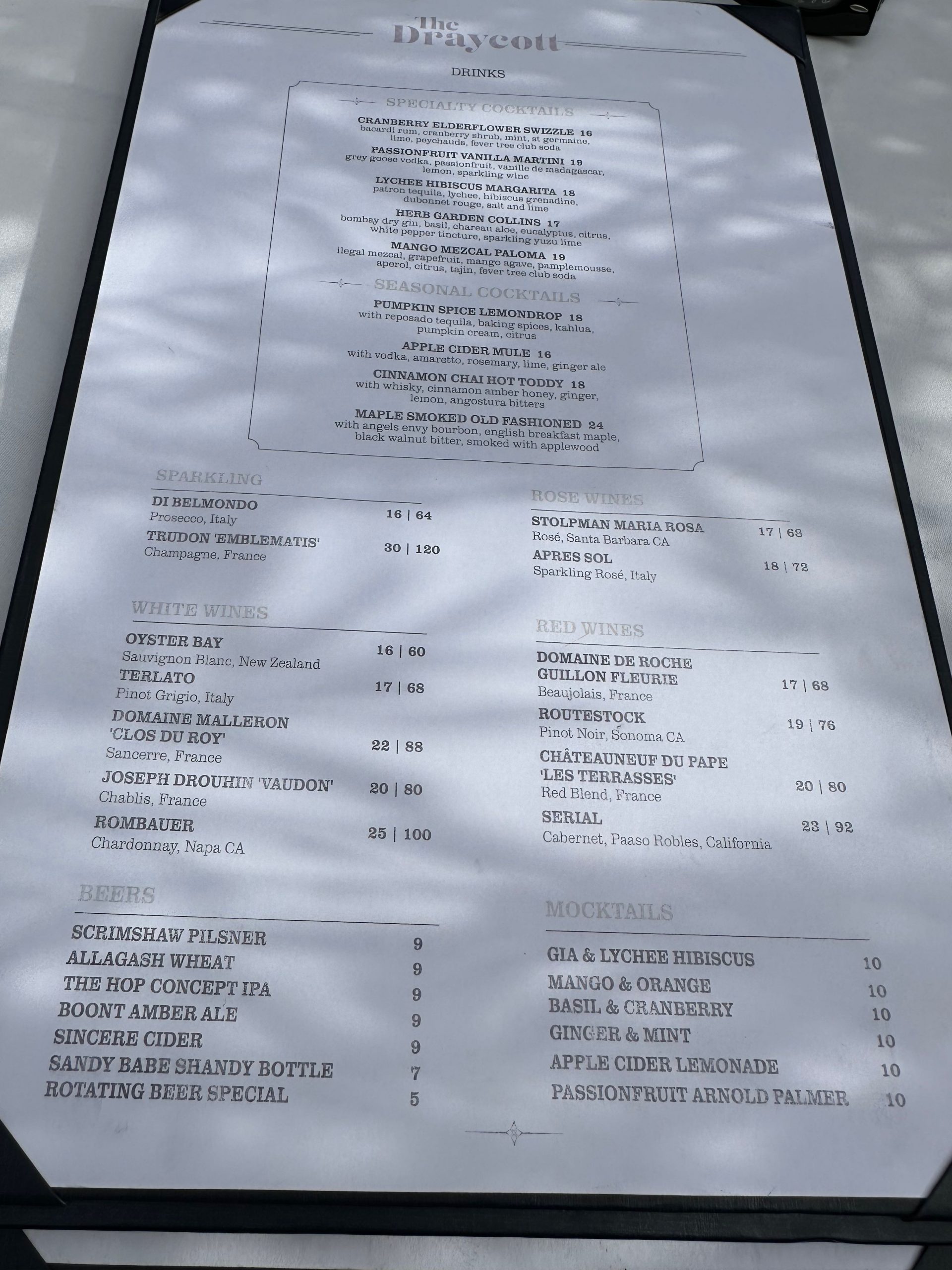 Don’t judge our shopping choices….the sweets were for my niece and nephew:- 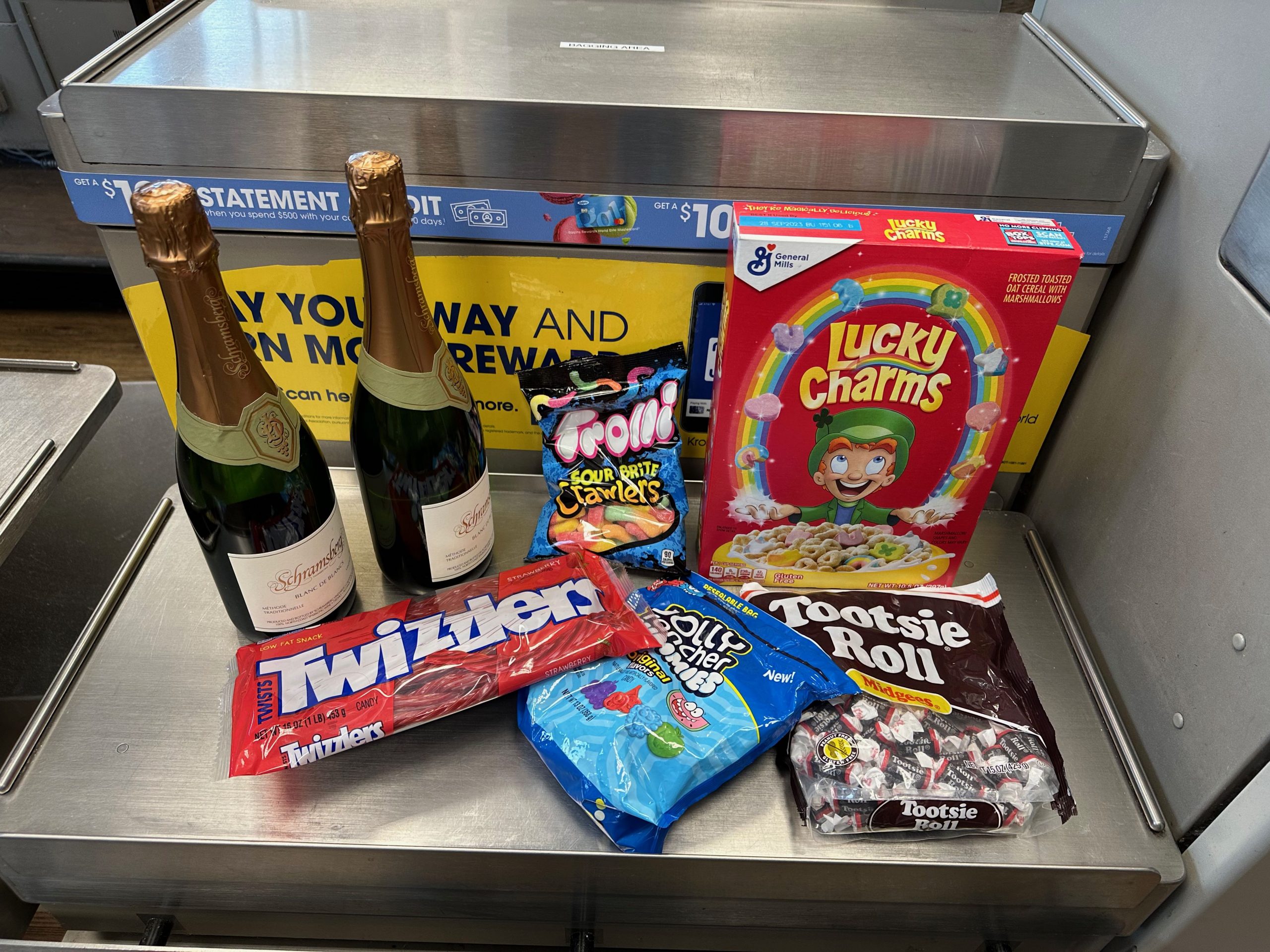 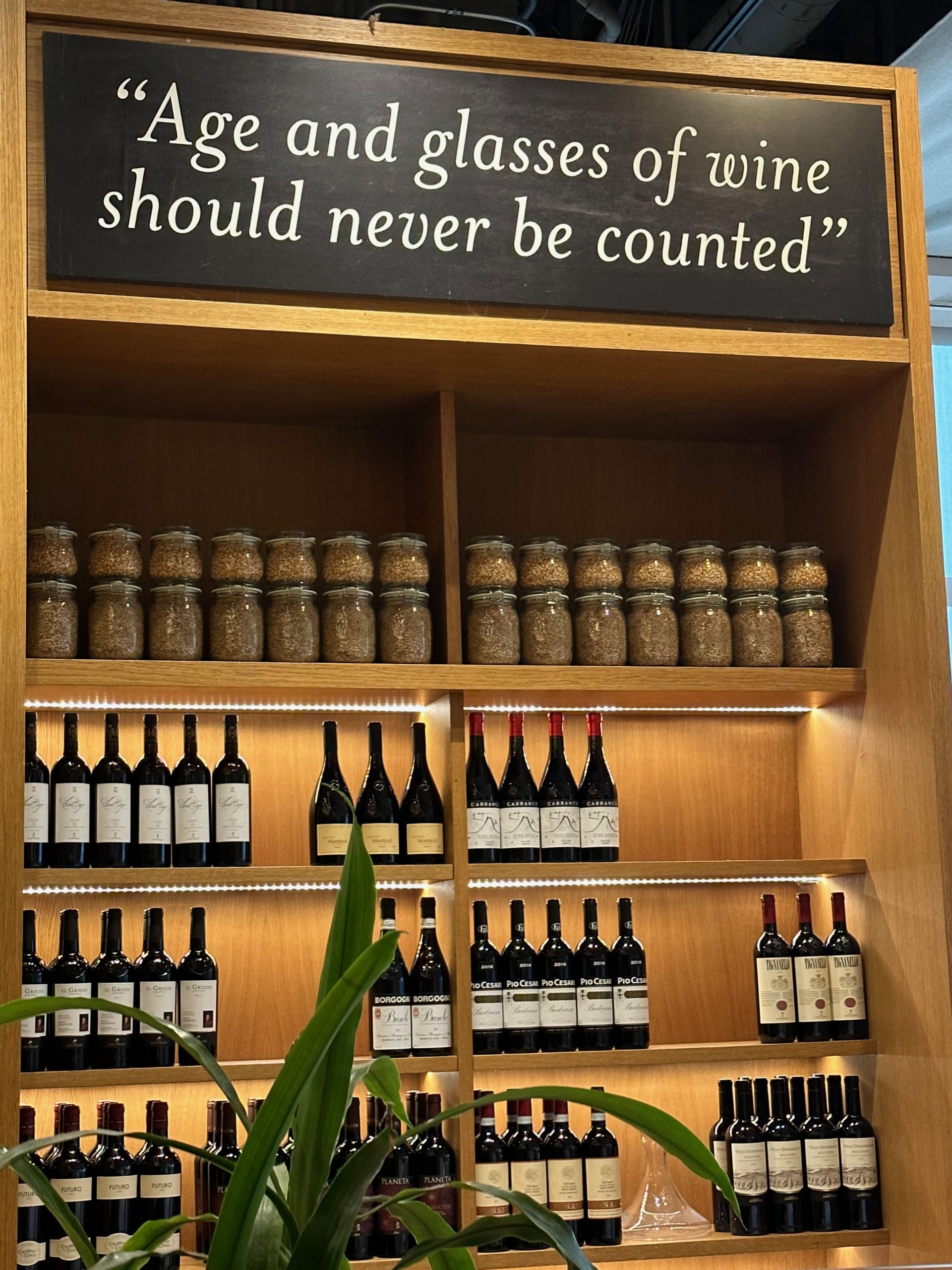 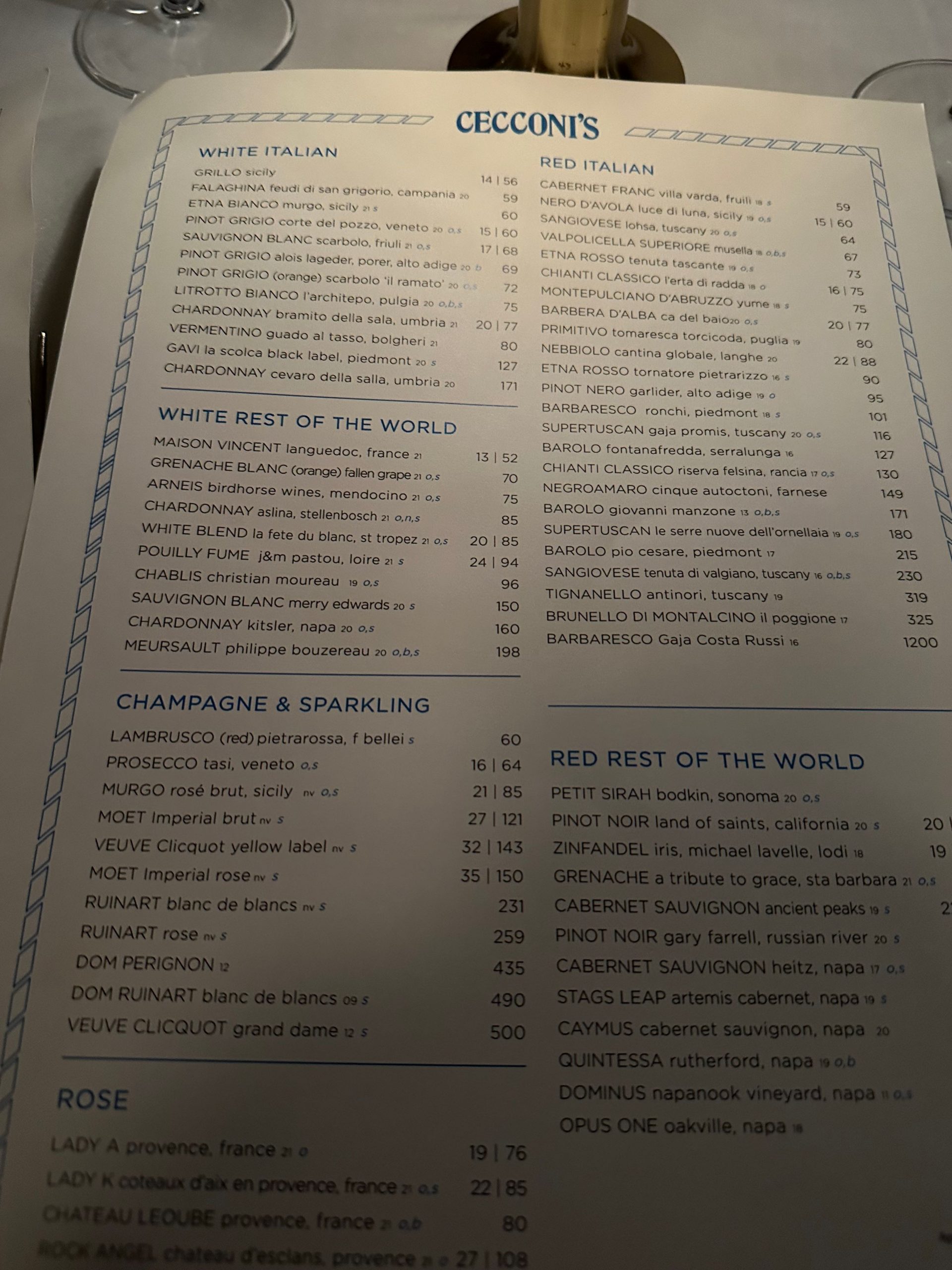 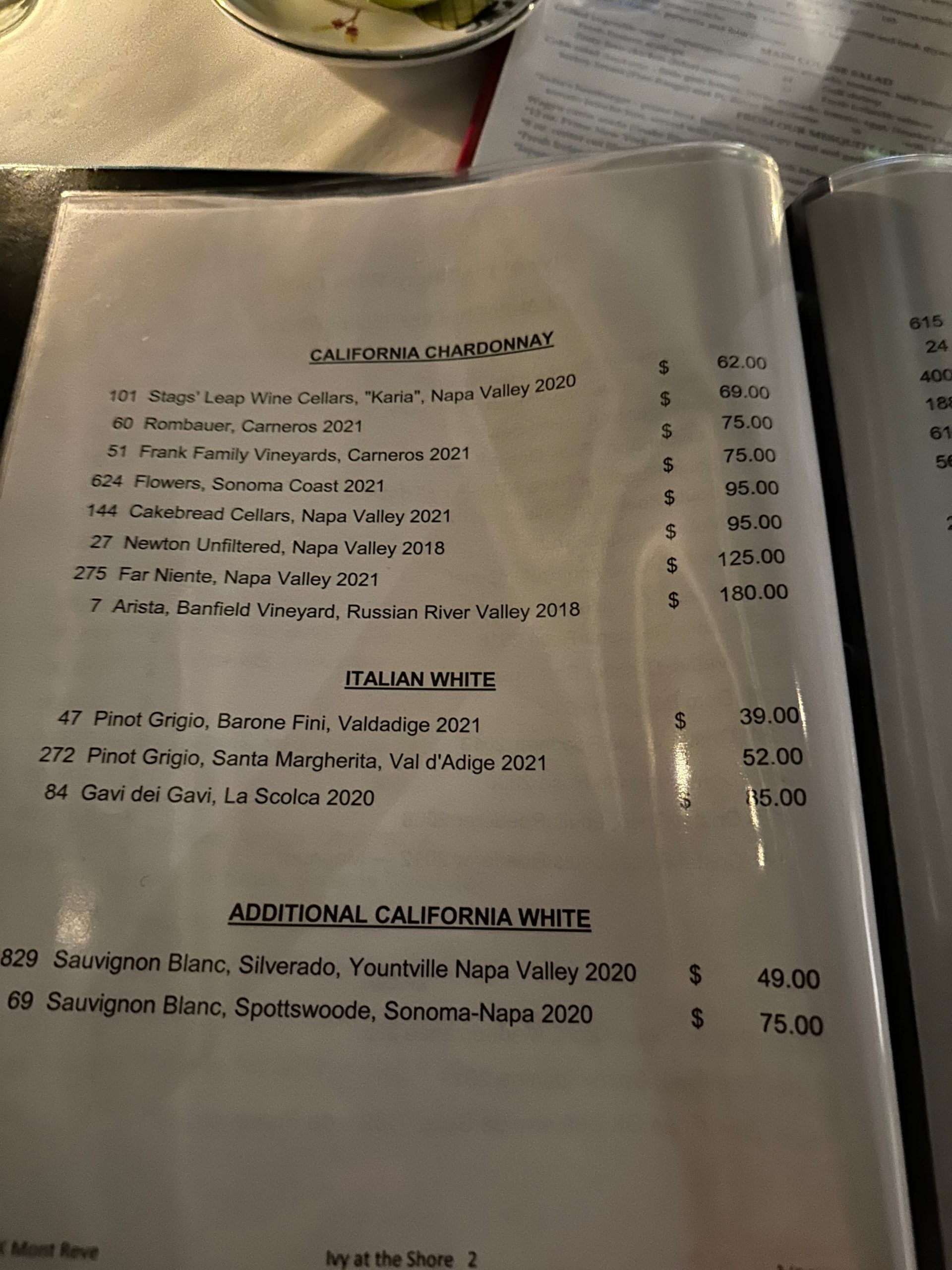 More on what else we did to follow! As we have a lot of great restaurant recommendations. 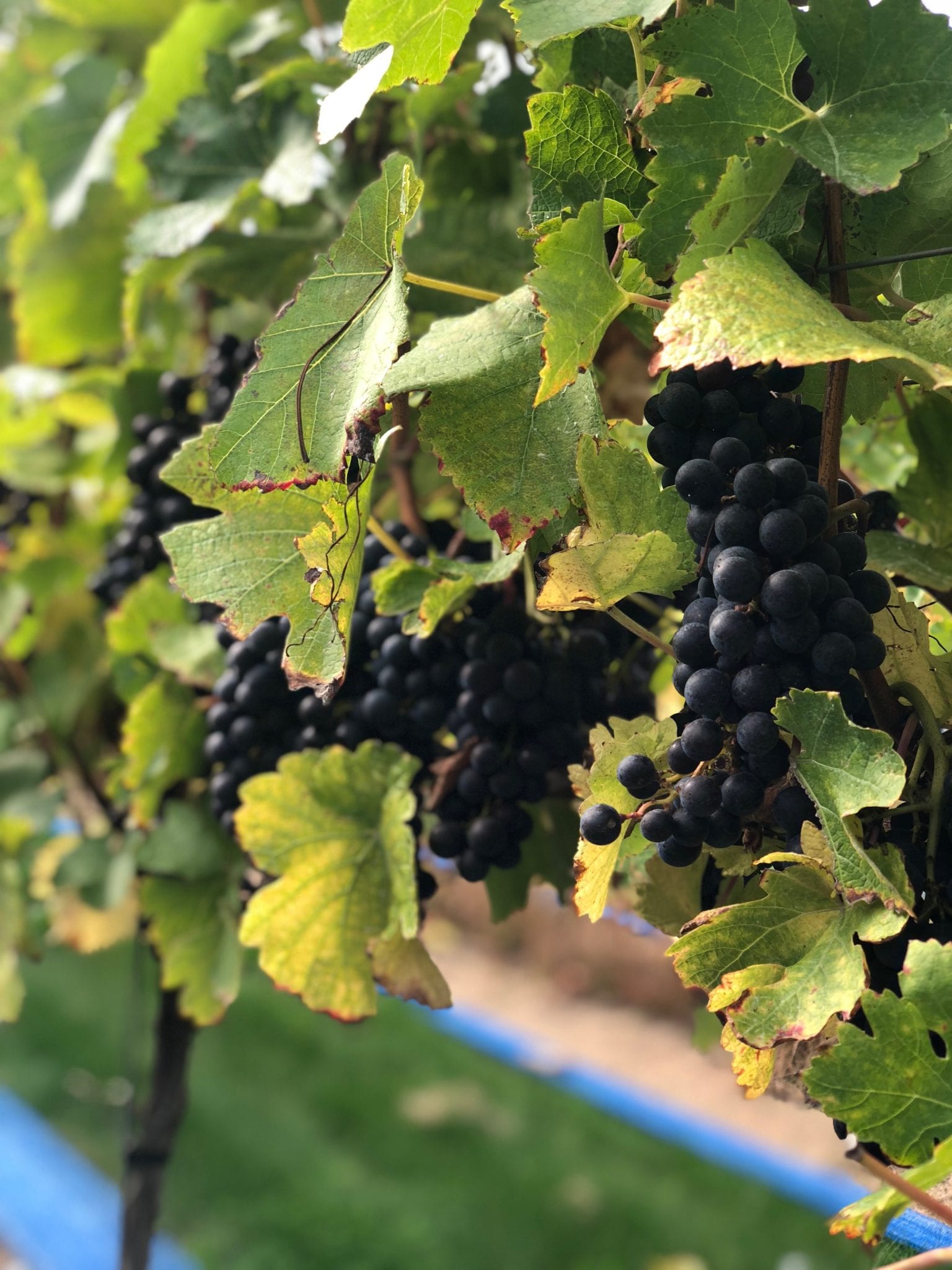