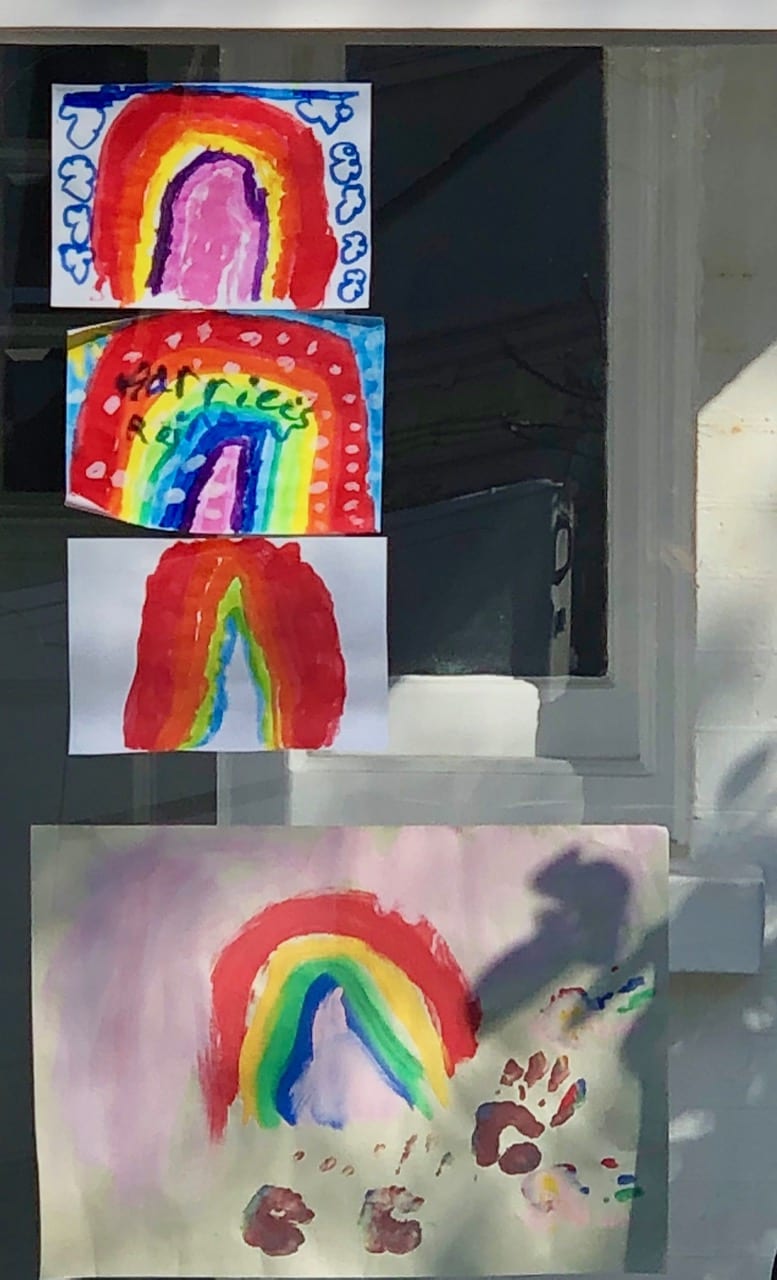 How is everyone doing?

Settling in or killing each other?

A bit of both in our case.

The whole country is bracing itself for what is expected to be the peak in a few weeks time as the number of deaths rise. We are all concerned about the lack of testing and the lack of protective clothing for our frontline medics and healthcare workers, but at least hopeful that Forumla 1 and Dyson appear to be coming up with ventilators and breathing equipment as speedily as possible. The new Nightingale Hospital is rapidly taking shape at the Excel Centre, where every year we normally attend one of the world’s largest travel shows, the World Travel Market. It was only in November last year that the whole world was there, what a difference just a few months have made. Boris hasn’t made an appearance for a few days since he was tested positive, along with key members of his staff, hopefully he’s recovering fast. Prince Charles is out of quarantine and back to work apparently. 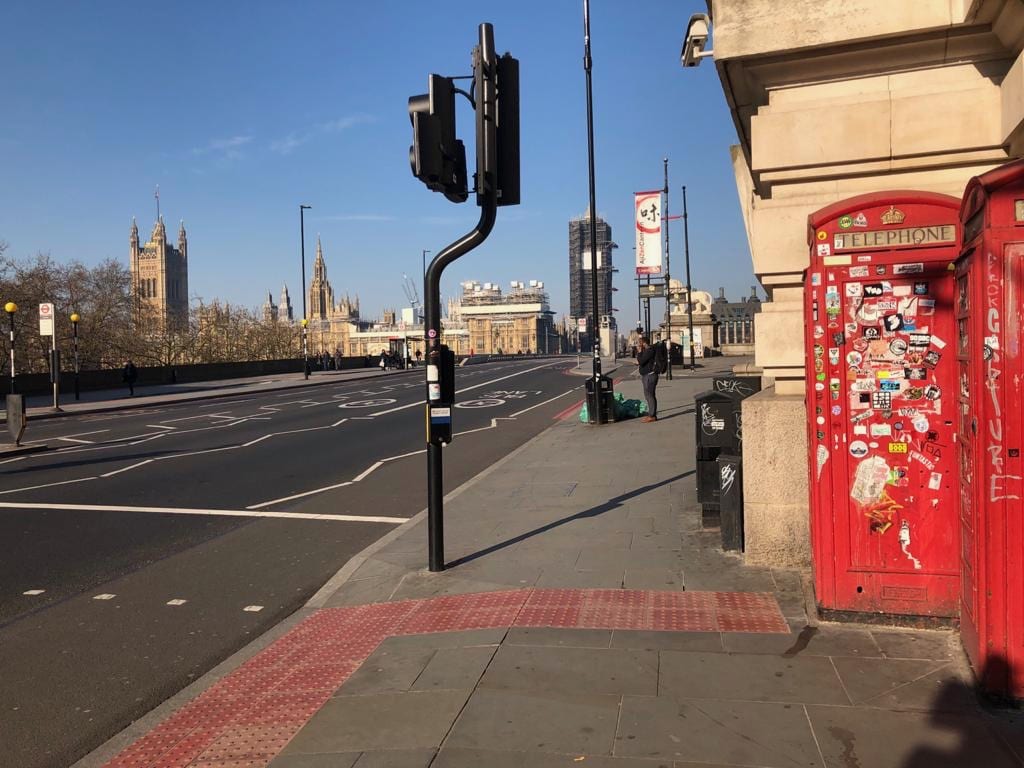 There is no template for dealing with this pandemic and we are all having to wing it and I for one am trying not to drink myself to death with anxiety and boredom before it’s all over. No one knows the outcome, no one is in charge and there is no exit strategy. It’s interesting how it’s bringing out the best and worst in people.

Now that I can’t work, I’ve been contemplating signing up for an online writing course, but just not sure I have the time. I am now in charge of wiping surfaces endlessly, sorting out a tip of a house, making ginger and apple shots for the children daily, cooking, shopping, walking, talking to friends (not on House Party anymore after the mass panic deleting of the app yesterday – sorry House Party, I bet one of your competitors spread that fake news), reading, doing the crossword, thinking about starting to sketch, or at least paint a rainbow to stick on the window, or colour in that NHS one, checking my diary to see if it’s still as empty as it was yesterday, adding a note to call my mother everyday AND of course CLAP for the NHS staff tomorrow night at 8pm. That requires a lot of preparation and planning. Pots and pans at the ready and a great excuse to talk to my friends who live across the road. Oh and also I have started making plans to build a tunnel across to them so that we can meet in the middle and drink wine together.

We did a lovely virtual party for my friend who was 60 on Sunday. Her daughter got all the neighbours to come out and sing to her and one friend delivered a care package (including loo roll) from all of us for her to enjoy. We couldn’t be with her, but she had her children, a cake, songs and a virtual party that will at least be a birthday for her to remember. 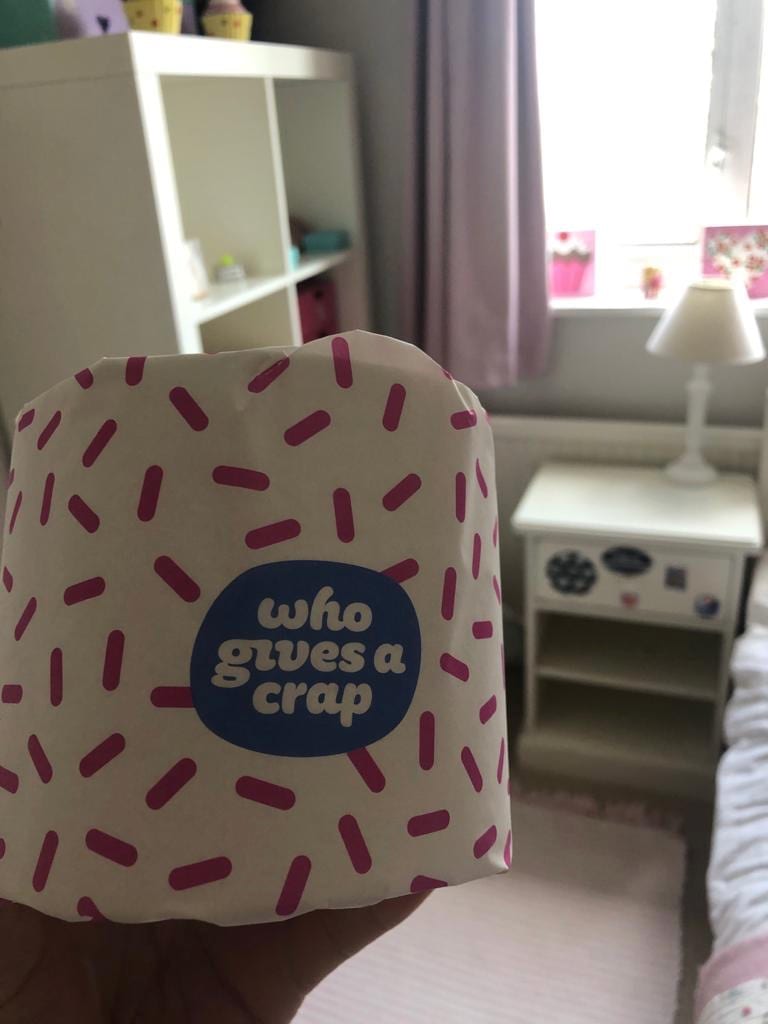 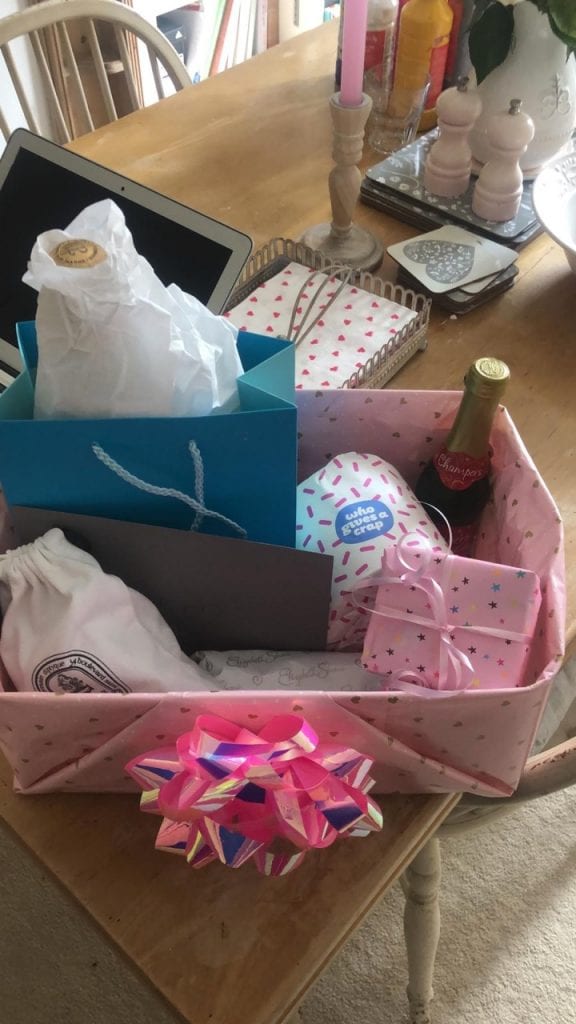 I have suggested another games night on Friday night (I hate games) with my children and have seen the look of panic in their eyes. Or maybe kitchen dancing. WHAT ELSE?? We have dismissed jigsaw puzzles and there are only so many quiz nights you want to partake in. This is not good. Maybe we will go camping in the garden. Can’t wait to see their faces when I suggest that one.

Mainly I have decided that apart from ensuring the house is well stocked (with alcohol), my job is to keep my children’s morale up and I suspect that they are both thinking the same about me. By the way, I’m not the only one to have turned to binge-buying booze – alcohol sales jumped by 22% in March in the UK, whereby grocery sales increased by 20.6%. Sadly, for the Spanish beer brand “Corona” they were the only alcohol left on the shelves. Mentally and emotionally this is very hard on all of us, but especially our young people, just as they are branching out in the world, life has changed beyond recognition. My daughter is at least working from home, so has a specific routine, unlike my son who is to be found either pacing around the house like a caged animal, kicking a football around our heads (a small, squishy one BUT STILL) or lolling in front of the TV, phone firmly on and engaged at all times. It’s tempting to tell him to get off the phone, but at the moment, there is not a lot else for him to do. Most of his stuff got left at his uni when he was sent home and now we can’t go and collect it all until restrictions have been lifted. That said, he has no issue with the job he has been given and seems to accept that he can’t see his friends for the time being. They all seem to totally understand and accept that whatever it takes and whatever it costs to save lives is worth all the effort. The sacrifice the young are making for their grandparents is truly heartwarming. When this is all over and the virus has been defeated, we will need to help our young rebuild in what we hope will only be a deep short recession, rather than a long term depression. They are all planning the moment when they can once again explode out into the streets and dance their little hearts out on the day we are released from our homes, suggesting that they may bring the country out of recession on Day One as they spend all the money on FUN in the pubs that they are currently saving.

It’s quite hard not having a plan, but like all of us, the best we can do is to take this a day at a time and find joy where we can. Safe in the knowledge that we are all, collectively, working as hard as we possibly can on stemming this viral flow. Everyone I’ve seen is respecting the social distancing and there is a guilty pleasure in walks in our local park at the moment, now both cars and cyclists have been banned. The birdsong is glorious, the blossom beautiful. 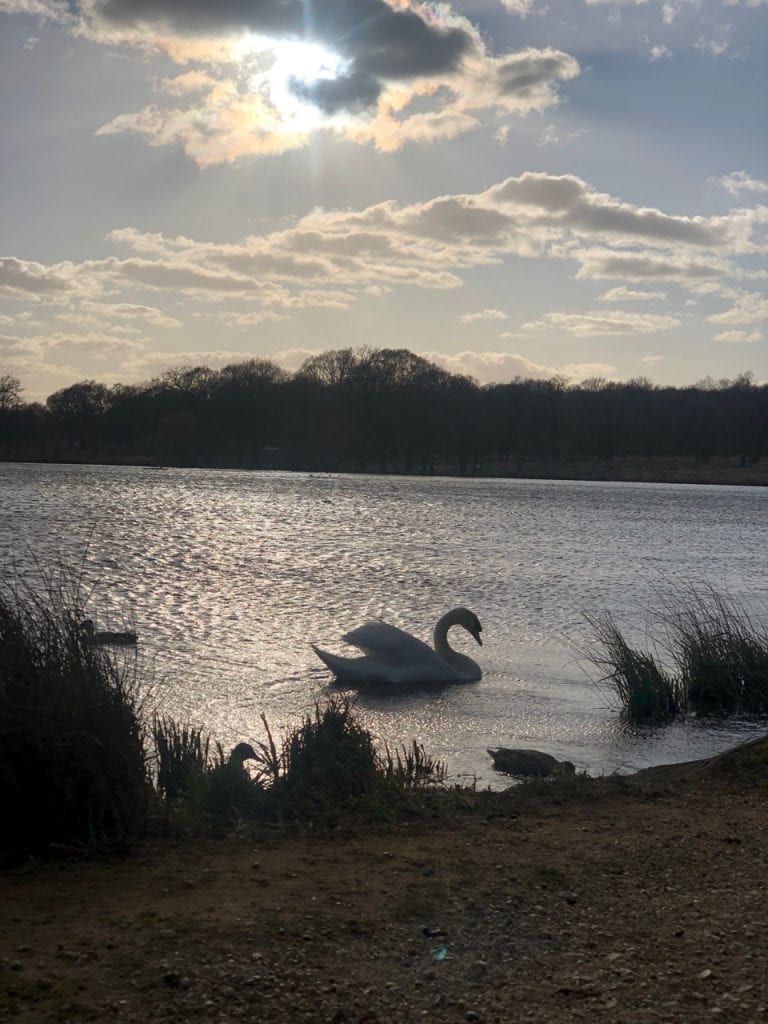 There is a clear desire to stand together in isolation, reinstating our local communities, that had been lost over time in our mass of busyness. These rainbow paintings in my neighbours’ windows are making me happy and filling us all with hope as we traipse up the road for our daily constitution. Our neighbourhood WhatsApp group is abuzz with offers of help – people off to the shops and does anyone need anything? An elderly neighbour requested the music to “Imagine”, someone dropped that off for him, another played and sang for us from his sitting room, everything is being shared. It’s quite lovely. 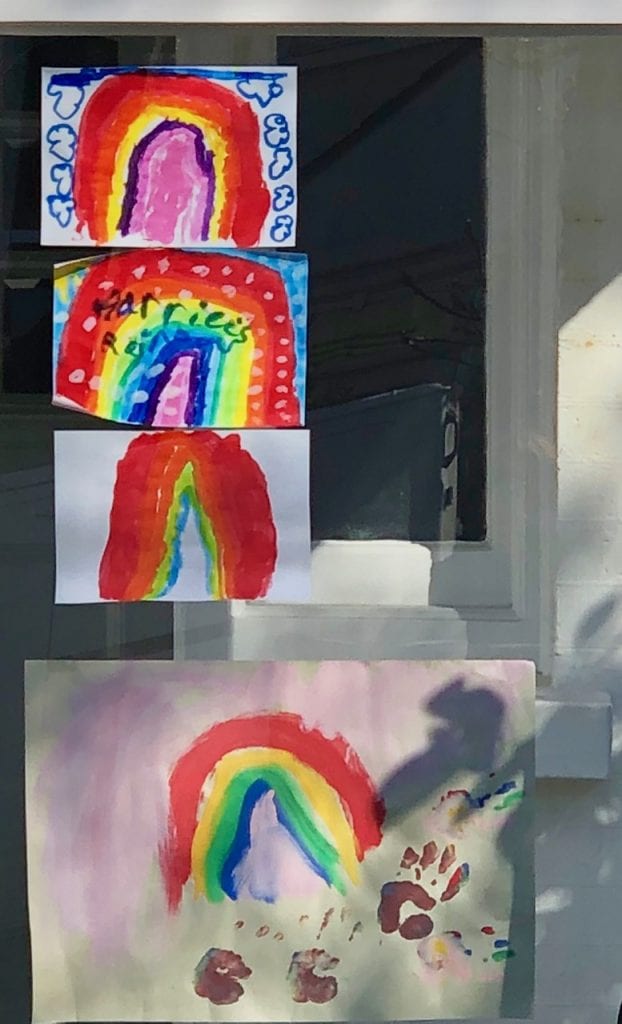 And this message rings true:- 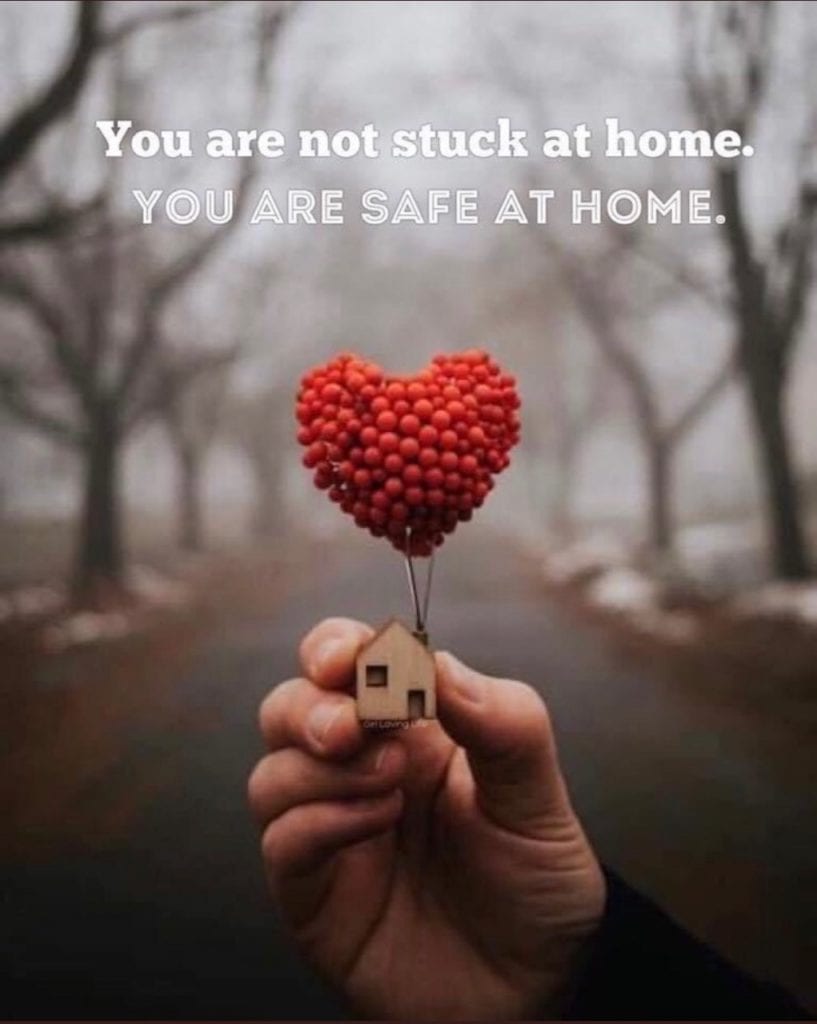